With the right public infrastructure investment, the United States could as much as double the amount of carbon dioxide emissions currently captured and stored worldwide within the next six years, according to an analysis by Princeton University researchers.

The authors propose in the Proceedings of the National Academy of Sciences a pipeline network that would transfer carbon dioxide waste from ethanol refineries in the American Midwest — where grains are fermented to produce the alcohol-based fuel — to oil fields in West Texas. The captured carbon would then be pumped into near-depleted oil fields through a technique known as enhanced oil recovery, where the carbon dioxide helps recover residual oil while ultimately being trapped underground.

The authors were motivated by a tax credit passed by Congress in the 2018 Bipartisan Budget Act to encourage investment in carbon capture and storage. Their analysis showed that this large-scale capture-and-storage network would only be possible — and profitable for the companies using it — if the tax credits are coupled with low-interest government loans to fund the necessary pipeline infrastructure. If governments provided low-cost loans for only half of the pipelines, the resulting smaller-scale network would still sequester 19 million metric tons of carbon dioxide per year.

"The new tax credits are the most significant policy incentivizing carbon capture, utilization and storage (CCUS) in the world today," said first author Ryan Edwards, a AAAS Congressional Science and Engineering Fellow in Washington, D.C., who earned his Ph.D. in civil and environmental engineering from Princeton this year. Edwards worked on the analysis as a graduate student under co-author Michael Celia, director of the Princeton Environmental Institute (PEI) and the Theodora Shelton Pitney Professor of Environmental Studies and professor of civil and environmental engineering.

"This is the first time we've had a policy in front of us that lets us seriously consider deployment on a large scale," Edwards said. "There's a lot of interest in CCUS at different levels, and bipartisan support. What there hasn't been is a plan for how this could happen and what it would look like."

The U.N. Intergovernmental Panel on Climate Change has identified carbon capture as a key component in reducing carbon dioxide emissions and maintaining the planet's average temperature within 2 degrees Celsius above pre-industrial levels. To do that, it is estimated that by 2050, 5,000 to 10,000 million metric tons of carbon dioxide need to be captured and stored each year, Edwards and Celia report. 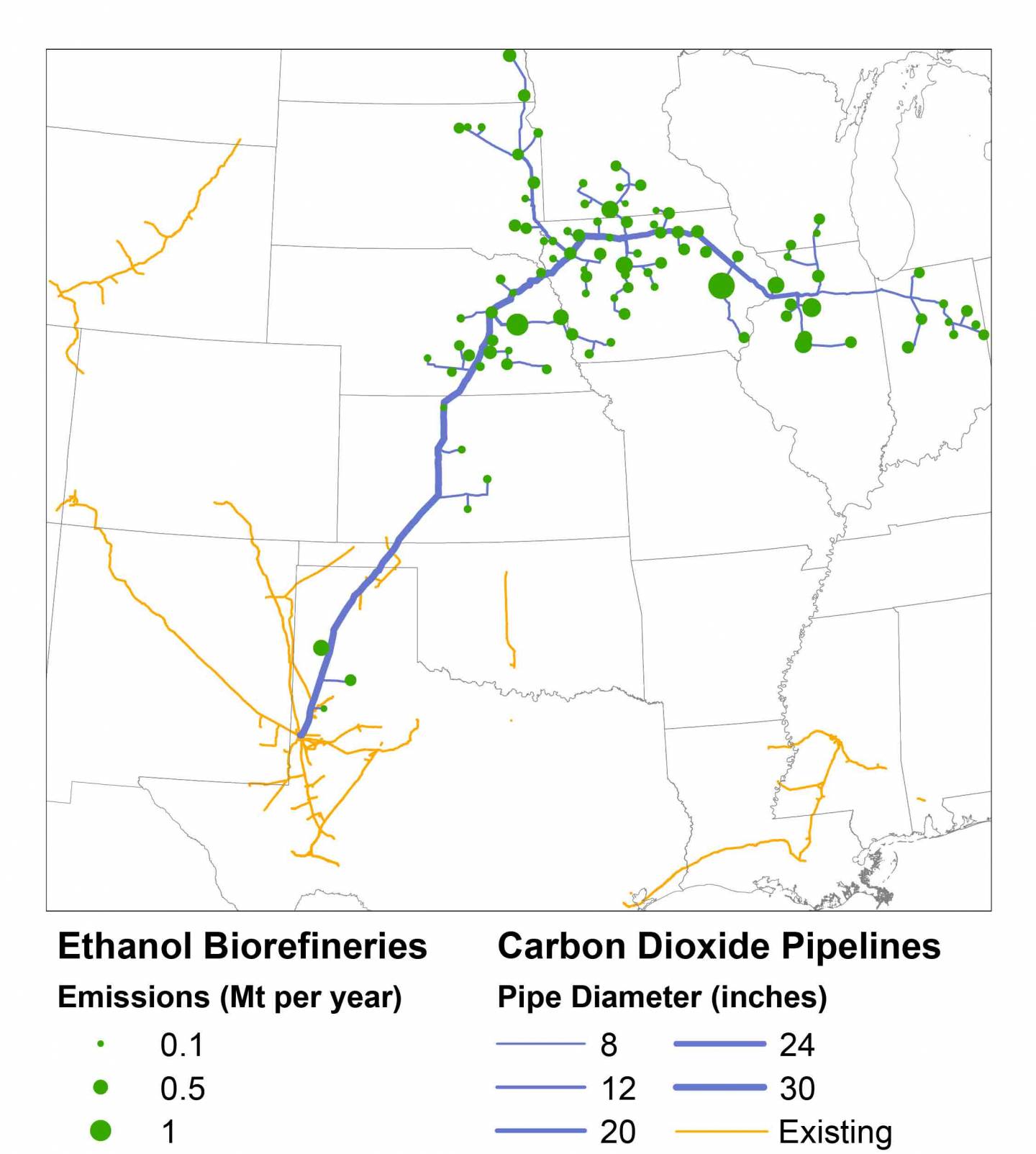 The authors found that the most viable pipeline network (above) would only be possible if tax credits passed by Congress in 2018 to encourage investment in carbon capture-and-storage technology are coupled with low-interest government financing of the pipeline infrastructure. After being transported to Texas, the captured carbon would be pumped into near-depleted oil fields where the carbon dioxide helps recover residual oil while ultimately being trapped underground. The proposed pipelines would help meet the increasing demand for oil while potentially limiting the drilling of new domestic oil wells in environmentally sensitive areas.

Nonetheless, implementation of carbon storage infrastructure has been hamstrung by a lack of policy support and large upfront costs for individual projects, Celia said.

"In order for CCUS to have any chance for large-scale development, the necessary infrastructure needs to be built," Celia said. "This includes pipelines to transport CO2 from the locations where it is captured to the locations where it can be used. Our study provides an economically feasible roadmap to build such a pipeline, which would be a critical first step for large-scale CCUS in the United States."

Similar large-scale infrastructures such as the Interstate Highway System and electric-power grids have been built with government financing and coordination, Edwards said.

"Our analysis shows that additional public support beyond the tax credits will be necessary to enable large-scale deployment in the near-term," Edwards said. "That's how these things are done — governments play a key role. An excellent recent example is the leadership on clean-energy infrastructure by the Texas state government that enabled the big wind-energy boom there."

Edwards and Celia focused on ethanol refineries because the gas they produce is more than 99 percent carbon dioxide, which makes it among the most cost-effective to capture, Edwards said. By contrast, he said, the byproduct of burning coal is only 10-15 percent carbon dioxide and the capture technology is expensive. The cost of capturing carbon dioxide from coal or gas sources ranges from $50-75 per metric ton, compared to around $20-30 per metric ton for ethanol sources.

Conventional recovery from an oil well yields about 40 percent of the total oil within the rock, Edwards said. Injecting carbon dioxide into the reservoir enables recovery of more oil, typically around an additional 15 percent, he said. The carbon dioxide is separated from the oil at the surface, then the gas is returned into the ground and ultimately trapped there.

The network Edwards and Celia propose could increase enhanced oil recovery in the United States — currently limited by a lack of affordable carbon dioxide — by 50 percent, they wrote.

"This can be a win-win for climate and domestic energy security," Edwards said.

"Global oil demand is expected to continue past 2050, so there is a need for new oil production," he said. "If there has to be more oil, it's much better environmentally that we produce oil domestically from an existing field rather than drilling new wells in places such as the Arctic, or importing it from new frontiers. Being able to also sequester captured carbon makes the overall technology extremely attractive."

"The scale of the carbon problem is so large that no single technology can solve it," Celia said. "Fossil fuels are likely to be a significant energy source for the foreseeable future. CCUS is the only currently available technology that can solve the carbon problem while still allowing fossil fuels to be used. All current projections of a low-carbon energy future include significant amounts of CCUS."

The paper, "Infrastructure to enable deployment of carbon capture, utilization, and storage in the United States," was published Sept. 18 in the Proceedings of the National Academy of Sciences. This work was supported by the Princeton Environmental Institute (PEI) through the Carbon Mitigation Initiative, the PEI-Program in Science, Technology and Environmental Policy (PEI-STEP) Graduate Fellowship; and a 2017 Maeder Graduate Fellowship in Energy and the Environment from Princeton's Andlinger Center for Energy and the Environment.