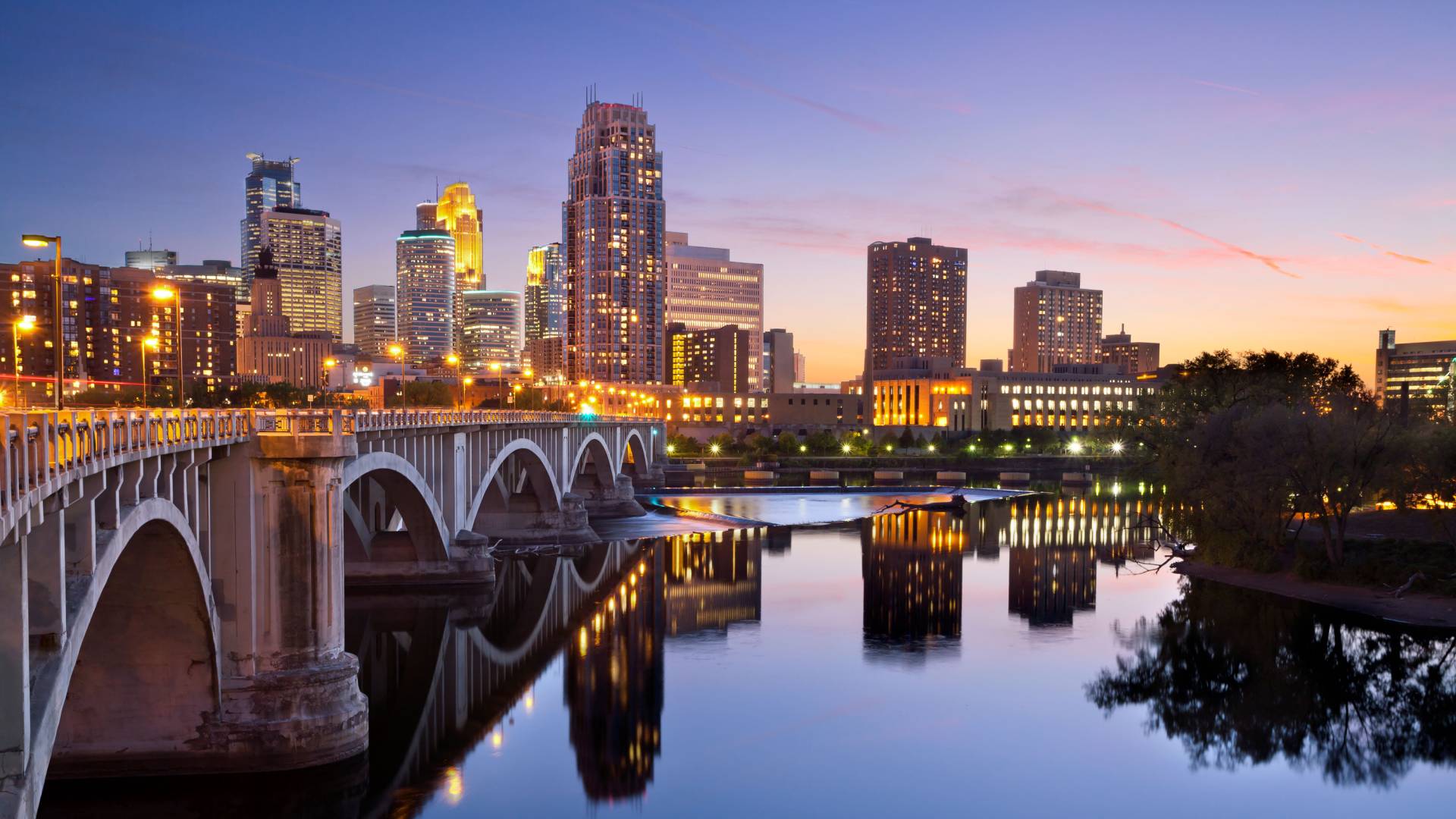 The Minneapolis-Saint Paul skyline at twilight. Princeton’s Anu Ramaswami partnered with the Twin Cities Metropolitan Council to create a net-zero tool for the region.

To get to net-zero carbon dioxide emissions, what actions should cities prioritize?

“In cities, environment health and human wellbeing intersect,” said Anu Ramaswami, who developed the tool and is Princeton University’s Sanjay Swani ’87 Professor of India Studies and a professor in three other programs — the Department of Civil and Environmental Engineering (CEE), the Princeton Institute for International and Regional Studies, and the High Meadows Environmental Institute — as well as the director of the M. S. Chadha Center for Global India.

“About 55% of the world’s population lives in cities, and more than 90% of the world’s gross domestic product is generated in cities,” she said. “If you can figure out zero-carbon strategies at the city scale for different types of cities across the globe, there’s potential to solve global challenges with local benefits.” 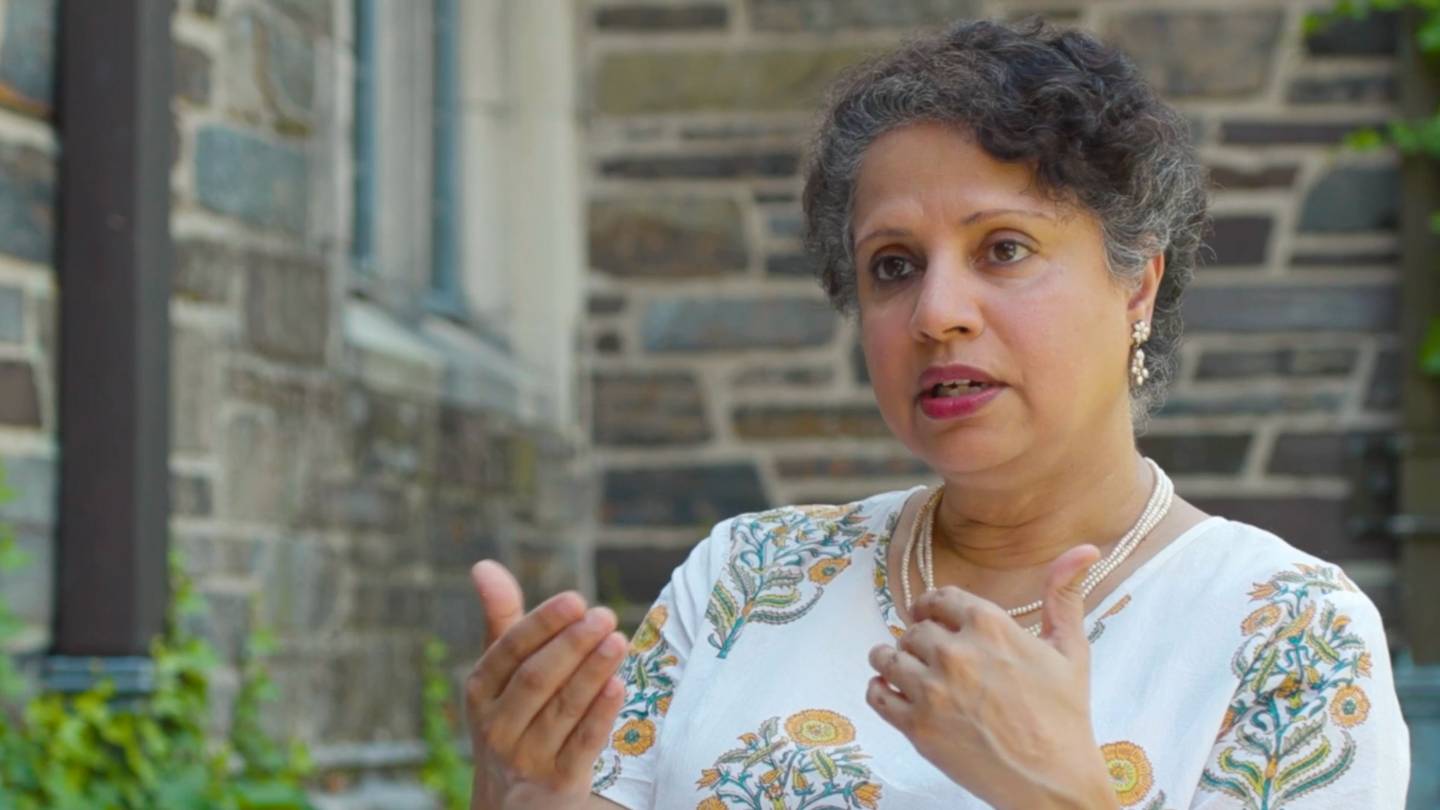 Which local choices have the greatest carbon dioxide impact? Ramaswami created an emissions calculator to help city planners and town councils around the world reach their goals for cutting carbon dioxide and other greenhouse gases.

At a UN climate summit last fall, 1,049 cities with a collective 722 million occupants joined the “Cities Race to Zero” campaign, committing to halve emissions by 2030 and reach net-zero by 2050 or earlier, which was the largest and most aggressive set of commitments by any group at the summit.

Ramaswami is working to help these cities reach carbon “net-zero,” sometimes called “carbon neutrality,” balancing the amount of carbon dioxide emitted with the amount absorbed from the atmosphere. Cities that emit no more greenhouse gases than are permanently removed are essential to averting the worst consequences of climate change, say experts.

To that end, Ramaswami and her team have developed the Zero Emissions Calculator for Communities (ZECC), a carbon dioxide emissions calculator. They then took it a step farther by partnering with the Twin Cities Metropolitan Council (Met Council) in Minnesota, incorporating high-resolution local data to create a “Greenhouse Gas Scenario Planning Tool” (currently in beta testing) for every city, town and rural community in the Minneapolis-St. Paul region — all 182 of them.

“This is the first project to quantify each community’s energy use projections, based on granular data on each town’s own building stock, its own energy intensity and its own employment characteristics,” said Ramaswami.

Her Princeton team included Kangkang “KK” Tong, a postdoctoral research associate in CEE who is now an assistant professor at the China-UK Low Carbon College, Shanghai Jiao Tong University; Bhartendu Pandey, a postdoctoral researcher in CEE and the Lead Urban Data Scientist in Ramaswami’s Urban Nexus Lab; and Roshan Shankar and Jinjin Chen, graduate students in CEE. The team worked against the backdrop of Princeton’s larger Net-Zero America Project, which modeled power grid transitions across the US, enabling Ramaswami’s team to focus more deeply on urban-scale processes that need to be integrated with larger-scale decarbonization models. 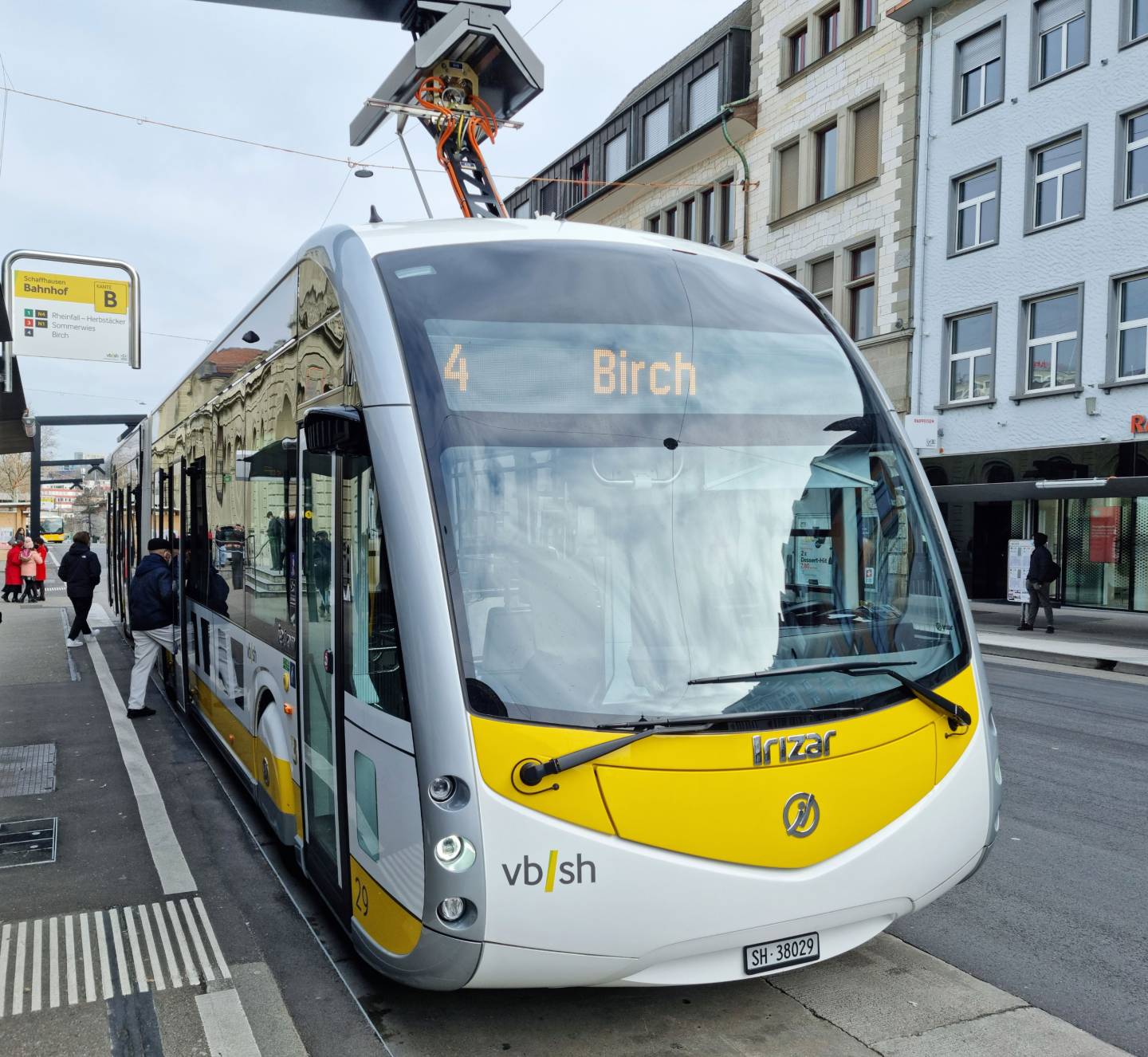 Changes like converting gasoline buses to electric ones, like this one in Schaffhausen, Switzerland, help cities reduce their greenhouse gas emissions.

Ramaswami’s team collaborated with the Met Council through a knowledge co-production process between researchers and practitioners that has been advanced by Ramaswami’s work with cities since 2010. Co-production is gaining attention as an important research method to create actionable science by engaging the users and producers of knowledge in collaborative discovery.

This particular co-production project was unique because it involved collaboration to inform models for 182 different cities and towns in the metropolitan region, who were engaged in an innovative way through the Met Council’s senior researchers Mauricio Leon and Baris Gumus-Dawes.

Such co-production was particularly remarkable because Ramaswami’s team, the Met Council team, and various city and university partners ended up conducting online deliberations on zero-carbon pathways due to COVID-19 restrictions on in-person meetings. “Co-producing a project of this magnitude through virtual collaboration and discussion is really quite unique, and opens up new ways to scale up co-production,” said Ramaswami.

“The tool provides a nice intersection of sustainability and equity,” said Eric Wojchik, a planning analyst with the Met Council. “Obviously, focusing on mitigating emissions is important, but we also need to think about how we do that in a just and equitable fashion.”

"This can help us decide"

Russ Stark, the chief resiliency officer for the City of Saint Paul, said: “The creation of the new Scenario Planning Tool could be really valuable for us. We're always trying — literally month to month — to figure out the best use of our time in reducing greenhouse gas emissions. This can help us decide whether to focus more on particular transportation initiatives, or building energy initiatives, or other things… It can really help us decide which ones we need to do first, which actions can have the most impact, and how to stage those over time.”

The tool incorporates local data to equip every mayor or town council in the Twin Cities region with what they need to design their own pathway toward a net-zero future.

“There are big trade-offs, and this gives you data before you make those decisions,” said Kara Kockelman, a transportation expert and a professor of civil engineering at the University of Texas at Austin, who worked with Ramaswami and the Met Council to create the tool.

At the national scale, getting to net-zero will require big changes, like switching from fossil fuels to renewable power, but smaller-scale choices in municipalities everywhere will make a critical difference, Kockelman said.

Very specific. "We know whether trees exist in any given location in the Twin Cities region, at a resolution equivalent to an area of a small coffee table," she said, referring to emerging remote sensing methods from her group, mapping urban greenery at fine scale across the Twin Cities and other U.S. metro areas.

But that level of granularity is exactly what makes the tool so revolutionary, said Peter Lindstrom, a Met Council member. “If we're going to have an impact on climate change, that means every one of us doing what we can in our own household, our own neighborhood, our own city, our own region, our own state, our own nation. Collectively, that will have an impact.”

So many decisions have a carbon impact, Ramaswami said. Take building materials. Concrete, the default option in many government buildings for decades, has a colossal carbon footprint — at least 8% of global carbon dioxide emissions caused by humans come from the cement industry.

But a newly popular material, a wood-based product called cross-laminated timber, or mass timber, can turn buildings into carbon sinks. “Mass timber buildings can be a phenomenal way of literally storing the forest in your building,” said Ramaswami. 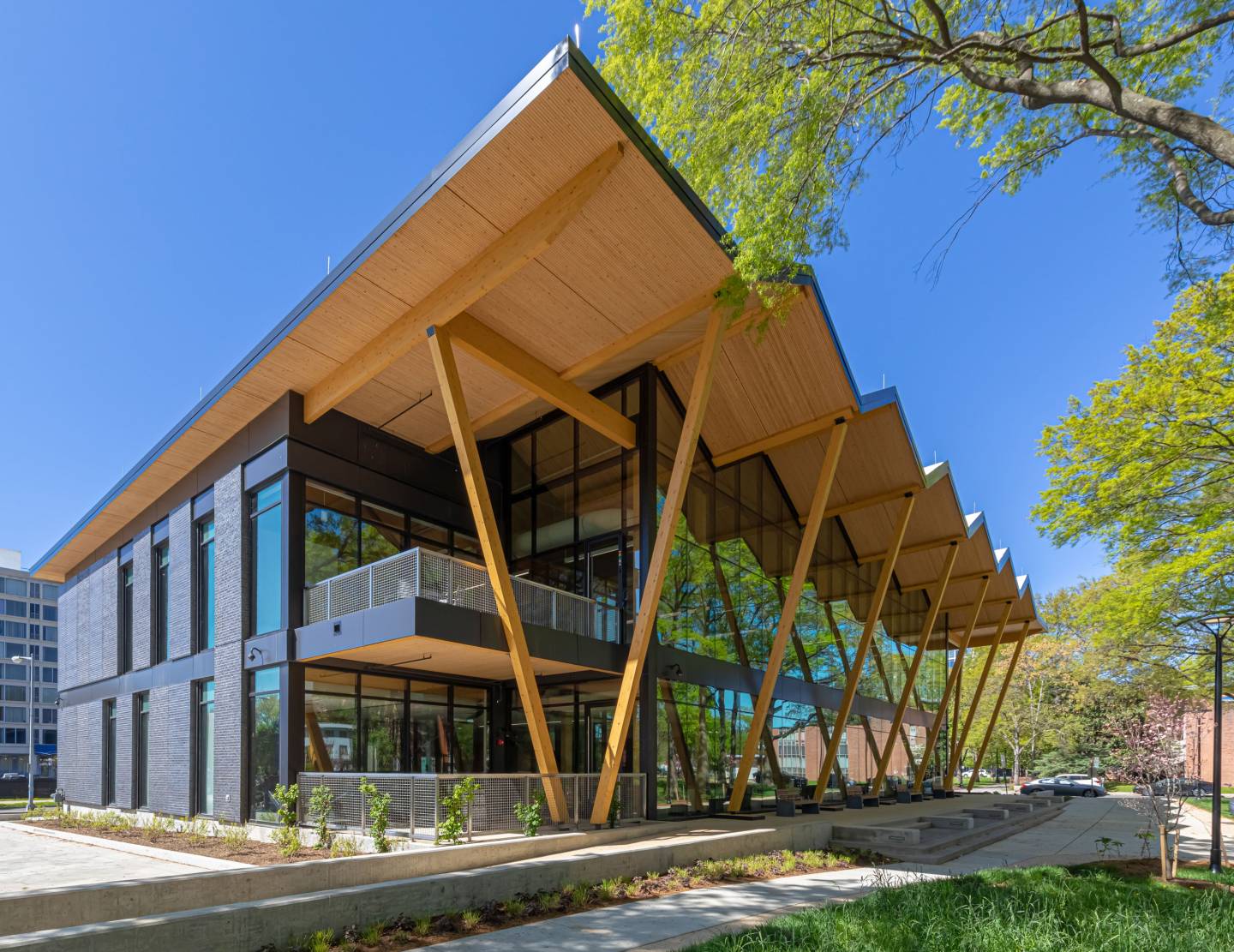 By constructing buildings out of mass timber, like the Southwest Neighborhood Library in Washington, D.C., cities can become 'sinks' — long-term storage sites — for carbon. A recent review paper from Ramaswami's group highlighted that a five-story building can store three times as much carbon as a forest taking the same land area.

Made by gluing together alternate layers of kiln-dried wood boards, mass timber offers the strength and stability of concrete or steel, but with a potentially negative carbon balance instead of the high emissions costs of cement and steel production. A lot depends on the lifecycle of mass timber construction. A recent review paper highlighted that a five-story building can store three times the amount of carbon as a forest taking the same land area.

In her work with cities around the world, Ramaswami has found that big changes, like transitioning to a net-zero carbon electric grid, and converting gasoline buses to electric ones, can help cities make large strides toward reducing emissions, but it can be surprisingly difficult to close the final gap to net-zero.

“Many cities are finding that is very challenging to get to net-zero by 2040, but they can get close, maybe 80% along the way,” she said.

In the Twin Cities case studies, she found designing buildings with mass timber, for instance, can close around 10% of the carbon gap. Building more multi-story buildings can result in compact urban design that maximizes travel efficiency to get another 20%, creates space for urban reforestation, and makes it easier to implement novel district energy solutions.

“Twenty percent is enormous!” said Ramaswami. “Build it of mass timber, and the benefit is even greater. That’s exactly what we’re trying to show different cities, that you can play with these different levers; they all interact with each other.”

A big urban reforestation campaign, or converting food waste to energy, might get you another three to five percent. “It’s not huge, but to get to net-zero, five percent is nothing to sneeze at. It’s very difficult to get that last bit, to go to zero,” she said. She also cautioned that urban forests must be long-lived to truly function as a carbon sink, and lifecycle assessments are needed to affirm the carbon benefits of waste-to-energy technologies.

From pollution to planetary health

Ramaswami has focused on the urban environment for most of her career. “My inspiration to do environmental work actually began in cities,” she said. “I lived in Chennai, India, and I was struck by the visible pollution.” 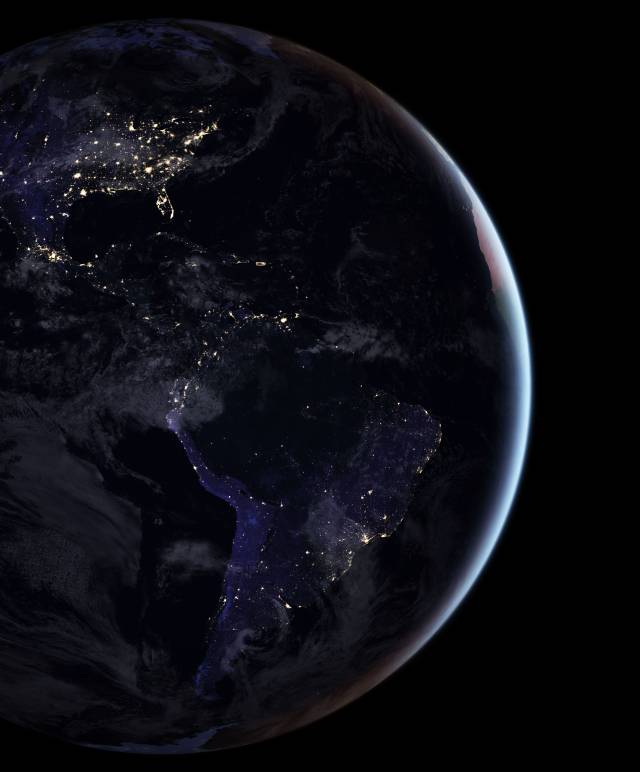 Global maps of the Earth at night reveal patterns of urban development.

She had trained as a chemical engineer, but she found herself wanting to look at the intersection between chemical engineering and pollution. That evolved into studying how local health and wellbeing is influenced by planetary trends — a field called planetary health. “I’ve always been really interested in human health,” she said. “I actually wanted to become a doctor, and I ended up studying the health of the world.”

In the face of growing populations and urbanization, Ramaswami has built a career helping cities accomplish goals that seem contradictory: Raising the standard of living for billions of people while also reducing pollution and conserving natural resources, including land, water and biodiversity.

“How can you accomplish these multiple goals in cities that are so diverse?” she asked. “So many cities have gone through these challenges. At one point, London was one of the most polluted cities in the world, with smog so thick they called it pea soup. Pittsburgh, where I did my dissertation, Los Angeles — these are case studies where ingenuity and good policy significantly reduced extreme air pollution.”

She often looks at the iconic image of the world at night, which in some ways is a map of urbanization. “The view of the Earth from space really shows us that humanity is just one species among many, and we have this one finite planet to live on,” she said. “The definition of sustainability is advancing human wellbeing for all within a finite planet. That guides my work.”