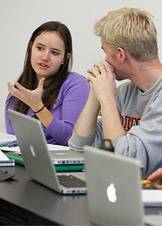 Students in the freshman seminar "Global Environmental Change: Science, Technology and Policy" are examining the issue of climate and sustainability through the lens of many disciplines. From left, freshmen Lucia Stanham and Christopher Kranenburg participate in a discussion during a session of the seminar, which is being offered for the first time this fall. The course is led by Eric Wood, the Susan Dod Brown Professor of Civil and Environmental Engineering, and Justin Sheffield, a research scholar and lecturer in civil and environmental engineering.

Gazing up at a projected map displaying the changing dietary habits of people from countries around the world, students in Professor Eric Wood's and research scholar Justin Sheffield's freshman seminar faced a difficult question.

"Why do you think we're seeing a global transition to a meat-based diet?" Sheffield asked the 14 freshmen gathered for the session of "Global Environmental Change: Science, Technology and Policy." The seminar, which is being offered for the first time this fall, addresses the issue of climate and sustainability through the lens of many disciplines.

One student posited that the shift in diet may indicate that consumption of meat connotes high social status in some cultures. Another student suggested that the increasingly globalized economy could be a factor in the transition — or, perhaps, that more and more people simply like the taste of meat.

With each question posed during the three-hour session, Wood and Sheffield extend the initial query into a further exploration of complex issues. 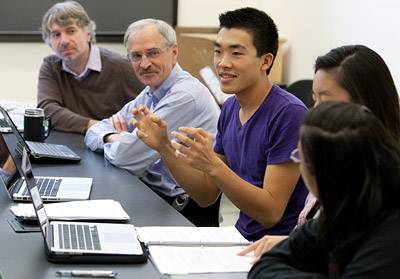 It had been less than 30 minutes since class began and already the room hummed with discussion that would continue until everyone was dismissed. Focusing primarily on global food crises that afternoon, Wood and his students — along with co-instructor Sheffield, a research scholar and lecturer in civil and environmental engineering — touched on a range of topics including the impact of modern technology on global agriculture, the importance of food security, the causes of recent spikes in food prices, and the pros and cons of U.S. foreign aid policies.

The previous week, the students focused on the environmental causes and socioeconomic effects of natural disasters around the world. Before that, the class focused on global water scarcity and its impact on economic development. And earlier sessions covered the impact of rapid population growth on global communities and the environment. The aim of the seminar, said Wood, is to explore the threads linking each of these issues and to challenge students to consider possible solutions. 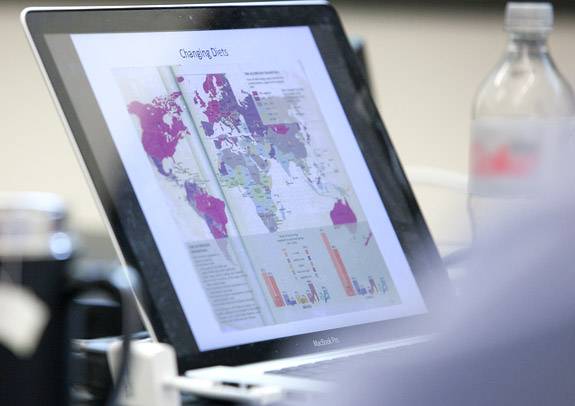 Among other topics, students in the seminar have explored changes in global dietary habits.

"One of the things the students are starting to understand is the interconnectedness of all these issues," said Wood, an affiliated faculty member in the Princeton Environmental Institute whose research focuses include climate, terrestrial hydrology, remote sensing and water resources. "We want students to realize that these aren't one-dimensional problems. You can't think of energy, food security or land degradation in isolation. It was our hope in designing this seminar that students would come to understand the complexity of it all."

To accomplish this, students are assigned reading material that includes contemporary literature concerning causes and effects of global environmental change and sustainability. Wood and Sheffield also provide several questions for students to consider between class sessions, which guide the following week's discussions.

In late September, they assigned reading material on the impact of China's "one-child policy" and showed the students how to calculate the eventual age distribution that will result.

When Chinese government officials "started calculating the data, they realized that age distribution will be heavily weighted toward older people, and that could create economic disaster," Sheffield said. "In the next 10 years, the number of Chinese people between the ages of 18 and 26 will fall by close to 50 percent, a statistic that is woven into the fabric of global environmental issues." 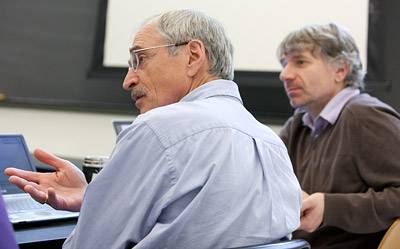 To better understand the causes and effects of global environmental change, Wood and Sheffield are guiding students through issues such as technology and agriculture, food security, food prices, and U.S. foreign aid policies.

Freshman Olivia Howard said she was drawn to the seminar not only because of her deep concern for the Earth's future, but also because she was looking for a course that would integrate many disciplines into the topic of global warming and sustainability.

"I'm attracted to interdisciplinary and conversational approaches to global problems, and I think that's a really important aspect of studying this issue," said Howard, who is leaning toward a major in sociology with a certificate in environmental studies. "This seminar looks at these problems from a wide array of perspectives, rather than just the hardcore science."

Students also are required to compose biweekly essays addressing myriad environmental and policy quandaries. At the close of the global food unit, the essay question asked: "How do we feed the world's population in the future in a sustainable, equitable manner, and what are the challenges in trying to do so?"

While he admitted they are often very challenging, freshman Ray Chao likes these essays.

"We're encouraged to create our own solutions and ideas," Chao said. "It requires a lot of creativity, and it's exciting to take what we're learning to come up with something new."

When he was a senior in high school, Chao made a short documentary exploring the intersection of environmental awareness and public policy. Now considering a major in the Woodrow Wilson School of Public and International Affairs, Chao said the seminar offers him a fusion of those two interests.

"Every week it's something completely different but also similar," Chao said. "There are so many different issues, but they are all connected into one huge issue of climate change. It's so multifaceted, and the connections run so deep."

Wood and Sheffield said they hope to continue teaching the seminar, which is designated as the Donald P. Wilson '33 and Edna M. Wilson Freshman Seminar, for a number of years to come. Not only is the topic important but, as Wood said, "Complicated environmental problems are inherently intellectually interesting."

"There's an intellectual satisfaction in thinking about these issues, discussing them and understanding how they all come together," Wood said. "For instance, vast parts of Africa are being bought up to use for biofuels. What does that mean for food security and water allocation? These are really interesting questions. They don't have easy answers, but that's what makes them so great to think about."