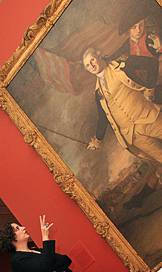 Rachael DeLue, assistant professor of art and archaeology, examines Charles Wilson Peale's 1784 painting, "George Washington and the Battle of Princeton,” in the University Art Museum during her freshman seminar, “Art as Science/Science as Art.” In the seminar, DeLue is helping freshmen develop critical-thinking skills while exploring how images relate to science and to social and political landscapes throughout history.

Below left: DeLue discusses a work in the University Art Museum with students in the seminar.

First-year students are discovering the excitement and challenge of working in a small-group setting with a professor and fellow students on a topic of special interest to them through Princeton’s freshman seminar program.

This year, some 950 freshmen — nearly 80 percent of the class — are expected to enroll in one of the 70 seminars being offered during the fall and spring semesters.

Almost universally, students say that their freshman seminar was one of their best academic experiences at Princeton and that they form their most enduring intellectual friendships with fellow students in the seminar.

The Nov. 20 issue of the Princeton Weekly Bulletin includes stories on two of the seminars, both focusing on the intersection between art and science. In the spring, the PWB will feature some of the other seminars offered this year.

George Washington loomed above them. Drawn from life by the American artist Charles Wilson Peale in 1784, he was withstanding scrutiny from a group of 14 freshmen and their professor, Rachael DeLue.

The visit to the Princeton University Art Museum, where “George Washington and the Battle of Princeton” is prominently displayed, was the genesis of a recent afternoon’s wide-ranging discussion in the freshman seminar, “Art as Science/Science as Art.”

A specialist in American art, DeLue’s work has a particular focus on the 19th century and on intersections between art and science. In her seminar, she is helping the freshmen develop critical-thinking skills while exploring how images relate to science and to social and political landscapes throughout history.

“I hope that students leave this seminar with a sense that art is not created in a vacuum, that artistic production is framed or shaped by other intellectual practices or modes of thought, scientific inquiry among them,” said DeLue.

The Peale painting, which commemorates the American victory over the British in Princeton on Jan. 3, 1777, offered an ideal opportunity to talk about what it means to represent or re-imagine the real. Fresh from reading excerpts from Charles Darwin’s “The Origin of Species” along with pre-Darwinian natural history writing, the students also were eager to analyze the triumphant Washington through the lens of natural science. 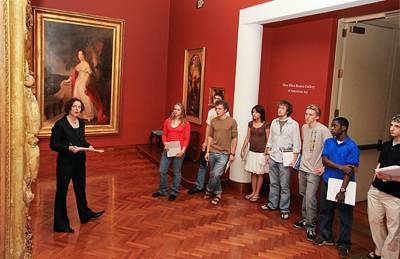 “The painting shows the general in his natural habitat,” said George Boxer.

“He looks as though he’s at the top of the food chain,” added Abdallah Bukari.

“And the other humans next to him are emulating animals in the way they tend to the [injured soldiers], like a deer with her young,” said Ellen Scott.

DeLue reminded the class of a prior reading about Peale’s natural history displays. “Remember his scientific investigations,” she said. “Peale was interested in physiognomy and thought that actual faces were a visual manifestation of internal character.”

For a contrast, the students proceeded to Claude Monet’s “House of Parliament, Seagulls,” with its swirling, blurry appearance.

Several students pointed out how difficult it was to find a focus to the painting due to the lack of a horizon and the lack of contrast between the sky, water and buildings.

“So what is this painting about? What is the subject?” asked DeLue.

“It’s about how you see something,” said Julie Steinberg.

“Yes, it’s about personal or subjective vision,” said DeLue. “Who might be thinking about vision in the 19th century?” she asked. “Scientists. At this time in the 19th century there was a major shift in understanding vision. What we have here is a science of sight.”

Reconvening in a classroom in Marquand Library, DeLue and the students took a close look at other artworks and the extent to which they may have been influenced by science.

She projected onto the wall an image of the 1859 painting, “The Heart of the Andes,” by Frederic Edwin Church. An intensely rich and massive work overflowing with details from nature, DeLue explained how it had been viewed as a “spectacle” in its day, and that onlookers were even asked to use opera glasses in order to capture its every nuance.

DeLue pointed out how the painting’s completion meshed with other important events in 1859: the publication of Darwin’s “The Origin of Species,” which disrupted the notion of divine design; and the death of Alexander von Humboldt, the naturalist and explorer whose travels in Latin America inspired both Church’s artistry and Darwin’s science.

From Church’s painting, DeLue then took the students through a set of drawings by Odilon Redon that played with ideas of evolution in grotesque ways. There was a tadpole with a human face, a cactus man in a planter, a smiling spider and a skeleton man sprouting branches.

“Do you ever wonder if maybe some artists were actually hallucinating?” asked Kaitlin Sennatt, drawing laughs.

Bukari said that learning about the intermingling of ideas prompted by discussing works of art makes the seminar especially engaging. “I like the fact that in discussions we are able to dissect a work and see what aspects of science contributed to its creation, while also considering why it is still a piece of art,” he said.

For Parushev, who describes himself as a “fairly scientific type,” it is appealing to engage with big, open-ended questions. “What I most like is the freedom and depth,” he said. “There are not many disciplines that allow for a variety of ‘right answers’ to be derived from one’s personal observations and thoughts.”

At the end of the seminar, the conversation turned to how art and science were used to construct the notion of race. This topic and many others, supported by a host of written and visual texts as well as visits to museums in New York and Philadelphia, will round out the class.

“There is a singular energy and openness to first-semester freshmen at Princeton that makes for a particularly dynamic teaching and learning experience,” said DeLue. “I get to take part in the process by which they identify their interests and decide what it is that they are passionate about, and I feel privileged to be party to this.”