Members of the class of 2012 are volunteering for artistic and environmental programs in addition to performing more traditional service as part of Community Action, the University's student-run pre-orientation program. The offerings were broadened this year in an effort to build on the strengths in the community. Here, freshman Sophia D'Angelo cataloged artwork at the Ellarslie Museum in Trenton. Photos: Brian Wilson

The helping hands that Princeton's freshmen lend to surrounding communities before starting classes have broadened their reach this year to include support for the environment and the arts.

Members of the class of 2012 are working on organic farms, cleaning up rivers, and volunteering for artistic programs, in addition to performing the more traditional service of helping the homeless, working with teens in crisis and building affordable homes that serves as the basis of the University's Community Action program.

The program began Saturday, Aug. 30, and continues through Saturday, Sept. 6.

"A lot of the work we do is obviously addressing needs -- we have a group at the shelter and the soup kitchen -- but this year we also want to align ourselves with the assets of these communities in uplifting an area," said David Brown, director of the University's Student Volunteers Council and Community Action. "We added an arts group and also an environmental group because the arts really can be used to bring up a community that's struggling, and both groups build on strengths that are already present in the community. 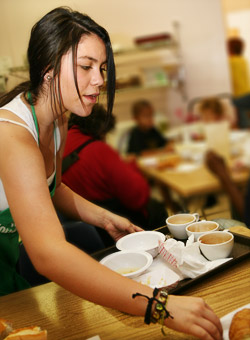 "We want to move beyond working alongside those who are responding to needs, which is something the Student Volunteers Council and Community Action will always do, and begin to see how we can recognize and develop the potential that is already there."

A student-run pre-orientation program established at Princeton in 1988, Community Action provides entering freshmen with their first opportunity to perform community service upon arriving at Princeton.

This year, the group of freshmen has expanded to 145 participants, up from 113 last year. This growth is partly attributable to the fact that the University decided to change the orientation schedule for international students to make it easier for them to participate in Community Action and Outdoor Action, a wilderness trip that allows incoming students to form early bonds with each other in a similar way as Community Action.

Thanks to the new scheduling, the number of international students participating in Community Action this year has tripled to about 20 entering freshmen, Brown said.

The students are spread among groups of 15 students working at 13 Community Action sites on projects in Princeton, Trenton and Philadelphia. These now include an environmental awareness group that will work at farms and rivers in Princeton, and conclude the week with a recycling presentation for students at a nearby elementary school, in addition to the arts group working with the Trenton Children's Chorus and rehabilitating the facilities at Trenton's Artworks and Ellarslie Museum in Cadwalader Park. 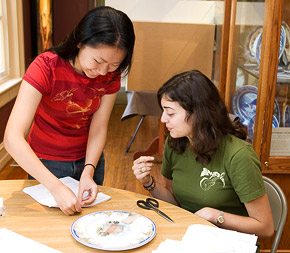 Freshmen Yanran Chen (left) and Nicole Rafidi labeled some of the pottery at the Ellarslie Museum. Rafidi said she was getting "an extreme sense of accomplishment" from the community service.

"I think it's important for freshmen to contribute to arts in the community because art plays such a huge role in the culture of the community," said Madeline Lu, a Princeton senior who is one of three student coordinators for Community Action. "By getting involved with the arts and music programs, the freshmen will really get to experience the heart and soul that surrounds a neighborhood."

Freshman Sophia D'Angelo has been volunteering for years in her hometown of Morristown, N.J., but she had never been to Trenton before going there with her Community Action arts group.

"It's been great!" she said. "Even beyond the experience of seeing the art and [working with] the people of Trenton, it's an amazing group of people and I've made so many friends already within my group."

From left, freshmen Risa Reid and Dale Mack and junior Clelia Douyon, a Community Action student coordinator, freshened up the paint on the 19th-century Italianate villa that serves as the home to the Ellarslie Museum. Participants in Community Action said they enjoyed opportunity both to engage in service and to make friends during the experience.

Participation in these activities has a lasting effect on the freshmen in Community Action, according to student coordinator Emily Feder. 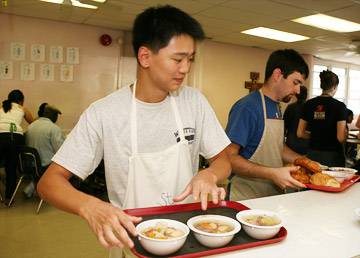 Freshmen Max Li (left) and Kevin Laskey got ready to serve dinner at the St. Francis soup kitchen. They are among 145 participants in this year's Community Action program, up from 113 last year.

"Many of the freshmen who participate end up visiting Trenton regularly during their Princeton careers to serve food and tutor, among other activities," said Feder, who will be a senior at Princeton this year. "Community Action my freshman year helped shape the career path that I am considering now, and it inspired the activities that I have participated in on campus."

Although it is just a week, and even if participants do not continue the work they began on Community Action, the exposure to the world outside of campus is "invaluable," student organizers said.

"Students are able to form bonds and feel comfortable within the community, which makes it a lot easier for them to take part in SVC events during the year," said Princeton senior and Community Action student coordinator Jonathan Harris. He explained that Community Action provides a chance to introduce students to the kinds of opportunities the campus-based Student Volunteers Council offers for getting involved during the academic year.

"But even more so than that," Harris said, "Community Action embodies what your entire college experience should be about, which is getting out of your comfort zone, learning, creating new experiences and great memories, and making a few friends along the way." 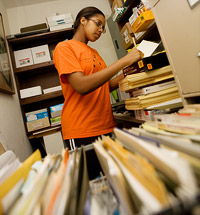 Freshman Maraiya Hakeem helped out with filing at the Ellarslie Museum.

Freshman Allen Williams of Rochester, N.Y., chose Community Action because he realized in his last year of high school that he wasn't giving as much back to his hometown as he would have liked.

"I figured I'm starting a new chapter in life and why not build good habits -- start community service," he said. "It just became a lot more important to me in this last year to give back to the community because it's really the community that makes you who you are."

Community Action is organized and partially funded by the Student Volunteers Council. Incoming students pay a participation fee. Because the University wants to ensure that the program is available to all members of the incoming class, the fee is fully subsidized by the Office of Financial Aid for all students receiving need-based financial aid from the University.

The Aspire campaign is raising funds to support the program and help ensure that it will evolve and remain strong in the future. More information is available on the Community Action website or on the Aspire campaign website under "Student Service Initiatives."