Members of the Princeton University community welcomed new faculty and students this September as they arrived on campus, attended orientation activities, and participated in their first ceremonies and traditions. (Video by Danielle Alio, Office of Communications)

The hot September sun blazed from a clear blue sky as Ruting Li, a freshman at Princeton University, pulled weeds hidden among the frilly leaves of a carrot bed. She and her weeding partner, fellow freshman Nick Archer, relished the long trail of wilting weeds in their wake. Around them, other members of the Class of 2019 busied themselves in the fields of Gravity Hill Farm, an organic farm in Titusville, New Jersey.

The experience was one of several freshman trips organized by the University's Outdoor Action program during the week before classes began. This year 726 freshmen took part in activities in eight states. The intent is that by camping, hiking, biking, canoeing and working together outdoors, freshmen can connect with one another and their upperclassmen group leaders, as well as with the Princeton staff, faculty and alumni who often accompany them.

Princeton organizes numerous orientation events that help freshmen become familiar with one another, the University and the community they'll live in for the next four years. From Sept. 2 until the first day of classes on Sept. 16, incoming students move in to campus, rough it with Outdoor Action, work on social issues in off-campus locations with Community Action, meet with faculty including President Christopher L. Eisgruber, and enjoy parties, cookouts and games on campus.

Freshmen are not the only new additions to Princeton. Orientations also are held for new faculty, graduate students, and graduate and undergraduate students from overseas. The University marked the beginning of the academic year with Opening Exercises on Sept. 13. The annual tradition consists of an interfaith service in the University Chapel with an address by Eisgruber and the recognition of undergraduate students' academic achievements. The ceremony is followed by the Pre-rade, a parade through campus, where freshmen are cheered on by other Princetonians.

The video above provides highlights from the University's various orientation events, and below, we take a closer look at Outdoor Action and Community Action. The slideshow below highlights social media posts shared by students on their journey to campus through Opening Exercises.

At Gravity Hill, around a dozen freshmen spent four days weeding, clearing vegetable patches of ground cover, and pulling the past season's tomato stakes from the ground, among other farm chores. In the afternoons and at night, they played games, learned about organic farming and camped on a hillside field. Their food came from the fields they worked.

Li talked and laughed with Archer, of Glen Mills, Pennsylvania, in a world very different from her native Shanghai, where smog often darkens the sky and food arrives from faraway places, she said.

"Last night, I slept under the stars and could actually look up and see them. You could never do that in Shanghai," Li said. "I feel our group has bonded a lot because we're always together. I think it's good to come here and disconnect from the world before all the craziness of Princeton starts."

For many students at Gravity Hill, the trip allowed them to help a local enterprise and experience a lifestyle they might not encounter again. "You get the chance to go backpacking more than you get the chance to work on a farm — I can go backpacking later," said Connie Zhu, of Phoenix, as she talked and weeded a vegetable patch with Simi Prasad from London. Prasad added, "It's work that has a definite purpose."

"It's not just exercising all day, it's about learning about a topic and going out and doing it firsthand," said Annie Klosowicz, of New York City, as she and Elena Anamos from Los Angeles removed weed barrier from an old row of peppers. "It's a really unique experience," she said. 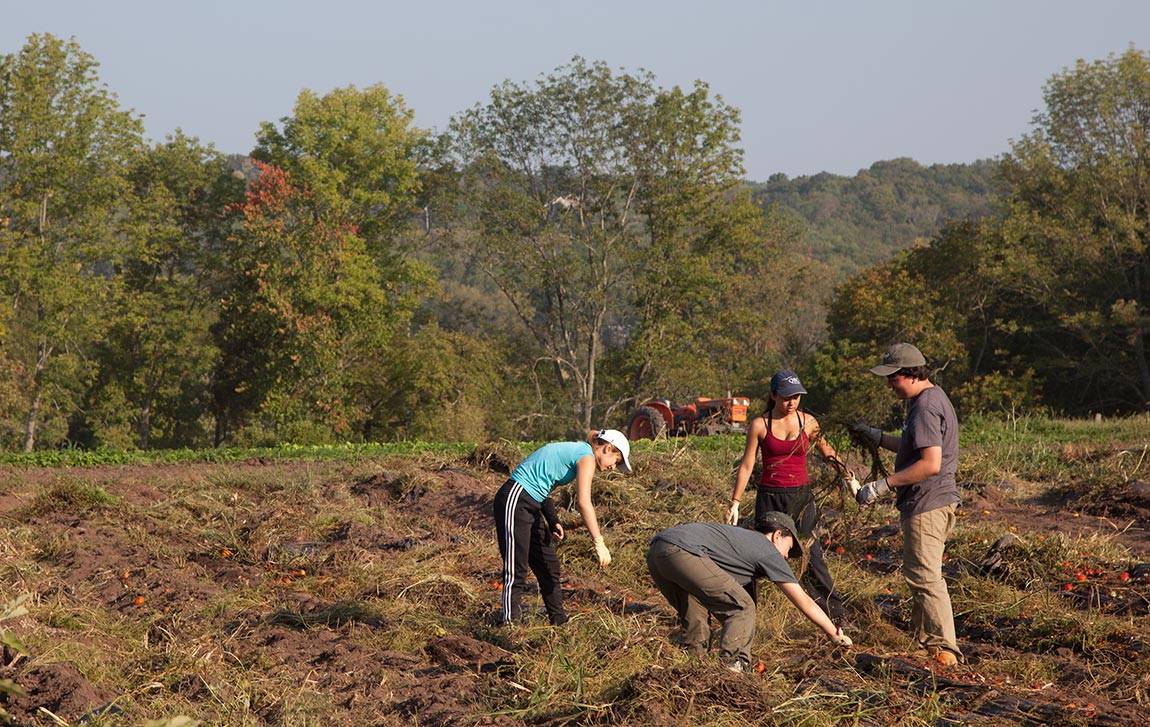 Members of Princeton University's Class of 2019 spent four days working and camping at Gravity Hill Farm, an organic farm in Titusville, New Jersey, for one of several freshman trips organized by the University's Outdoor Action program during the week before classes began. Princeton organizes numerous orientation events that help freshmen become familiar with one another, the University and the community they'll live in for the next four years. This year 726 freshmen took part in various Outdoor Action activities in eight states. (Photo by Morgan Kelly, Office of Communications)

Across a large field, Luke Shaw, of Scotland, wrested metal tomato stakes nearly his height from the ground, his back straight and knees tensely bent. Pouring sweat in the intense midday sun, he likened the task to tending fences on his grandparents' livestock farm. "I quite enjoy manual labor," Shaw said. "I thought this was a nice chance to do something and get something in return. With this, you feel like you're working toward something."

Gravity Hill farm manager Jill Thompson said the students were doing work especially important to an organic farm, tasks hard for her to get to as the end of the growing season nears. "I'm really surprised at how great these students are doing," Thompson said. "They're really focused and interested in doing everything right."

Selina Pi, from South Carolina, was one of many students at Gravity Farm who gained an appreciation and awareness for where their food comes from and for how difficult it is for farmers to produce it.

"I feel that a lot of people take for granted what's on our plate. We just go to the grocery store and it's there," Pi said. "I felt that way in the past. But going on this Outdoor Action adventure really helps me appreciate all the dedication, weather and chance that goes into producing the food that keeps me alive."

Fernando Hipolito of Queens, New York City, had never been camping or spent much time in the wilderness before his Outdoor Action trip. Yet, after a few days at the University-affiliated Princeton-Blairstown Center — an outdoor activity and educational facility in Hardwick, New Jersey, in the state's mountainous northwestern corner — Hipolito was the first to volunteer for an activity called the bird's nest.

Hipolito climbed a long beam of wood turned on its narrow end as his group members held it steady with pieces of rope. They provided encouragement and advice as he slowly ascended the metal pegs in the beam's sides toward the small platform atop the beam. Crouching on the platform, Hipolito carefully stood as the beam wobbled and his new friends cheered him on. Smiling, he extended an index finger — No. 1.

Living together in the woods doing activities based on trust and cooperation brought the group closer together than he expected, Hipolito said. "I thought it would be awkward because we don't know each other, but it's definitely been a bonding experience," he said. 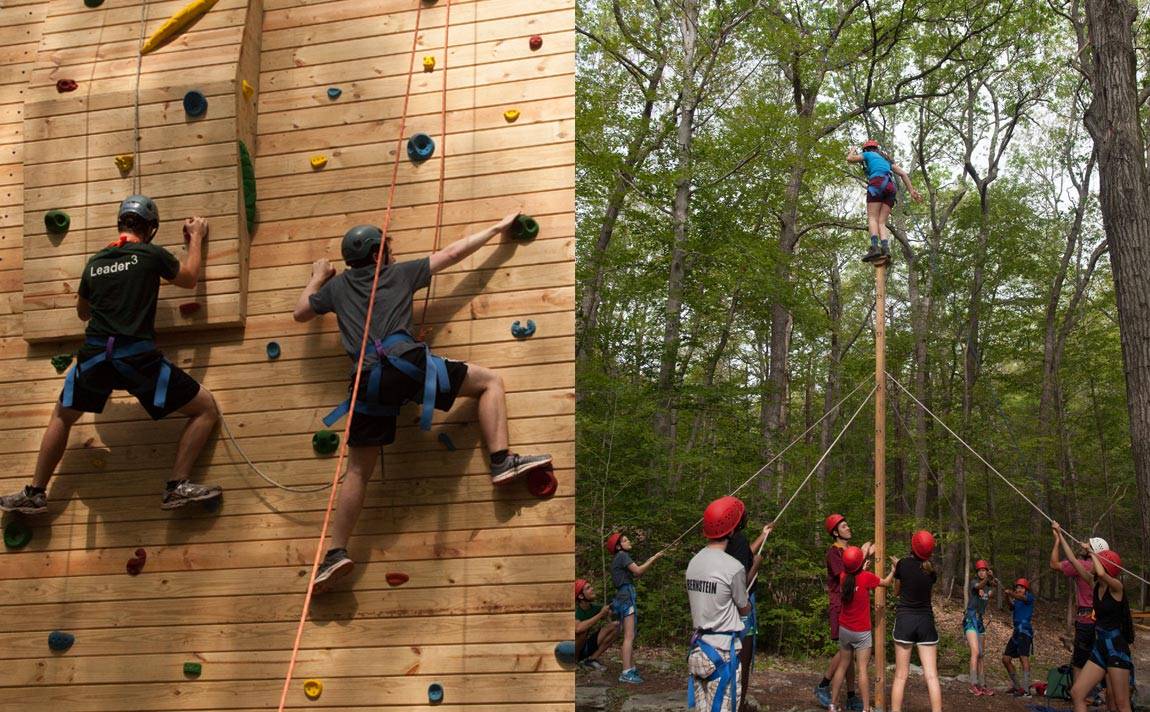 Many activities organized by Outdoor Action emphasize trust, camaraderie and teamwork. Freshmen groups are paired with upperclassmen leaders who help them acclimate to the outdoors and each other. At left, senior Mitch Shellman (left), a third-year Outdoor Action leader, ascends a climbing tower with freshman Noah Beattie-Moss of State College, Pennsylvania, at the University-affiliated Princeton-Blairstown Center, an outdoor activity and educational facility in Hardwick, New Jersey. At right, an activity called the bird's nest entails a student climbing a long beam of wood turned on its narrow end as members of their group hold it steady with pieces of rope and provide encouragement and advice. The climber ascends metal pegs in the beam's sides to a small platform atop the beam upon which they attempt to stand. (Photo by Morgan Kelly, Office of Communications)

Fresh from her turn on the zip line course that cruises from the treetops and high over a rocky brook to a nearby hill, Eliza Britt, of Newport Beach, California, stood atop a ladder held by her teammates as she detached herself from the zip line. The trip provides a context other than the busy halls of academe to get to know each other. "It's good to do something with your classmates outside of the classroom. I'm sure we have a lot of studying ahead," she said.

Angela Paoletta, of Rhode Island, laughed with her group members as they loosened her harness following her target jump — an activity where she leapt from a high tower to touch a suspended ball before slowly descending to earth via ropes. "We're all forced to be friends by living in the woods together, but I think we would have been friends anyway," she said.

The camaraderie freshmen feel during Outdoor Action can be lasting, said Mitch Shellman, a senior and Outdoor Action group leader. As a native of northern Idaho, he was thousands of miles from his family and friends when he came to Princeton. He met two of his best friends during his trip.

"It was the best college-entrance experience I could've hoped for," he said. "Once I got back on campus, I realized how close of a group we'd become and that I could turn to them anytime. The trip didn't end on the trail — it just took a different path." 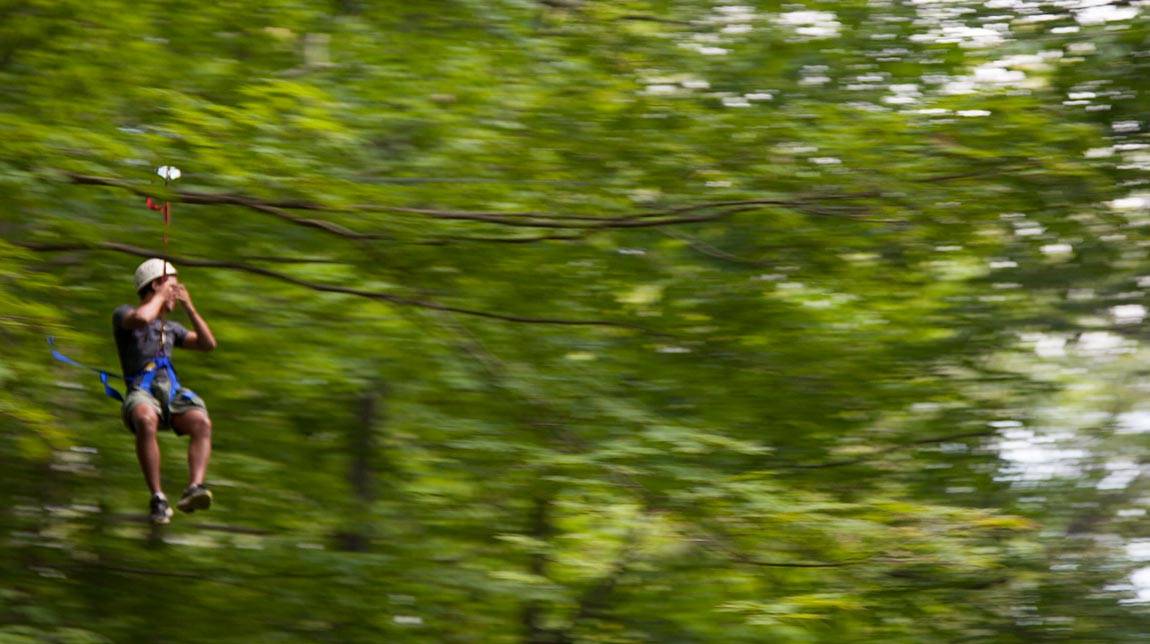 Coordinated by Princeton's Pace Center for Civic Engagement, Community Action featured 20 groups living and working with community partners in Princeton, Trenton, Newark and Philadelphia on topics including the arts and humanities, community development, education and literacy, environment and sustainability, health and human services, interfaith service, and law and justice.

On the afternoon of Sept. 8, members of a Community Action group focused on food insecurity in Mercer County — where Princeton is located — worked at the warehouse of the Mercer Street Friends Food Bank in nearby Ewing. Group members packaged food for the organization's mobile food pantry, filled orders for food pantries from the group's warehouse and prepared weekend meal kits for the Send Hunger Packing program for schoolchildren.

The weekend meal kits, which included breakfast cereal, boxed milk, cans of red beans and rice, and granola bars, were destined for the backpacks of needy students at John Witherspoon Middle School in Princeton. More than 650 students at 16 schools benefit from the program.

At the Westminster Presbyterian Church in Trenton, members of a Community Action team helped the pastor put on a back-to-school carnival for children in the neighborhood, among other tasks. The students toured Trenton, learning about the challenges besetting many sections of New Jersey's capital city.

The group also participated in "Discourse Night" Sept. 9, when all Community Action groups discussed service and civic engagement through the lens of the "Pre-read" book, which Eisgruber selected for all freshmen to read.

At the church, the students cooked a meal and shared it with church staff, members of the congregation and members of University staff who joined the discussion of "Whistling Vivaldi: How Stereotypes Affect Us and What We Can Do." The students shared what they had learned from their service in Trenton and made connections to what they learned from the book.