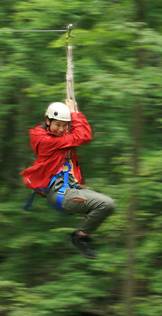 Lingzi Gui, a freshman from Beijing participating in Outdoor Action, zooms across the woods at the Princeton-Blairstown Center on the "super zip" line. More than 700 incoming freshmen are participating in Outdoor Action and Community Action, pre-orientation programs designed to help new Princeton students bond with their classmates and build leadership skills through adventure and service.

At left: As part of the Community Action program, freshmen ready wall sections for a Habitat for Humanity construction project in Trenton. Students are working with community organizations on 12 service projects in Trenton, Princeton and Philadelphia.

Below left: Outdoor Action leader Elizabeth Dilday receives encouragement from her team as she crosses a rope bridge, which the group encountered on a hike around Bass Lake at the Princeton-Blairstown Center.

Some 60 percent of the members of the class of 2010 are taking part in Outdoor Action and Community Action, experiential learning programs designed to build teamwork and leadership skills. Through Outdoor Action, 610 freshmen have ventured out on 68 different excursions through seven states from Virginia to Vermont, while 120 classmates are engaged in 12 Community Action volunteer projects in Trenton, Princeton and Philadelphia. 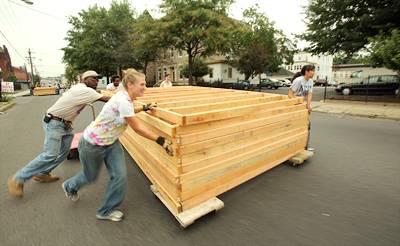 In each of the programs, which run Sept. 3-8, the freshmen are guided by upperclassmates whose own experiences in Outdoor Action and Community Action inspired them to return as mentors for the incoming class.

"Coming in as a freshman, I had so much fun last year. My group was very, very close, and knowing those 10 faces so well after a week put me at ease during my first few months on campus," said Elizabeth Dilday, a sophomore who is leading one of the Outdoor Action groups at the Princeton-Blairstown Center, a 275-acre camp in northwest New Jersey.

"We still talk about what happened on OA a year later. I had such a great time that I wanted to be part of it for three more years," Dilday said.

The five groups based at Blairstown are hiking, camping and participating in a variety of outdoor exercises that emphasize problem solving, such as navigating ropes courses and guiding blindfolded teammates through simulated minefields made of helmets and rocks.

"It's been amazing so far," said Idil Kore, a freshman from Nashville, Tenn., who was born in Somalia. "I've never been camping, but I love the outdoors. We hiked part of the Appalachian Trail, with a very intense hike up a mountain face. Reaching the summit was an amazing experience."

Kore added, "We've learned a lot of great games and had a lot of bonding experiences." 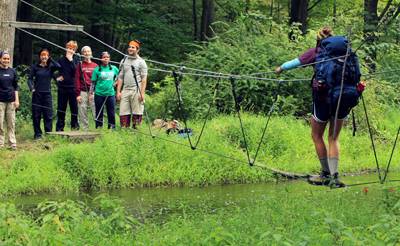 A highlight for many in the Blairstown group is zooming across the woods high above the ground on the "super zip" line. As each student zips across, others in the group spring into action as the "catch team" to help release their teammate from the harness and get safely to the ground.

"It's about team building and building communications and problem-solving skills," said sophomore Matthew Foglia, a group leader. "We've been having a lot of fun, and I think everyone has really been enjoying it."

In the Community Action program, students are working with service organizations such as Angel's Wings, the Crisis Ministry of Princeton and Trenton, Habitat for Humanity, the Hunger Coalition and Isles Inc. to support projects including building construction and rehabilitation, children's programs and soup kitchens and shelters.

One group working with Habitat for Humanity is assisting with construction of a group of row houses in Trenton. "I like the mission," said freshman Mickheila Jasmin of Queens, N.Y. "I want to make an impact on somebody's community. It would be great for me to see a house and say, 'I helped make that house for somebody. I helped make somebody's life a lot better.'"

Group leader Chelsea Craigie, a sophomore, said that while students learn new skills through their construction tasks, those are secondary to the lessons of teamwork and togetherness that students take away from Community Action.

"The freshmen who are here are starting their Princeton careers off with a tone of service, and they get to start school with the friends they've made," Craigie said. "I'm from Connecticut and didn't really know anyone when I arrived at Princeton. Living and working together, you really bond with each other during this first week."

The full complement of the class of 2010 -- a total of 1,230 students from 47 states and 42 countries -- will be on campus to begin an orientation program on Saturday, Sept. 9. Among the first activities for the freshmen will be joining the rest of the University community at Opening Exercises at 3 p.m. Sunday, Sept. 10, in the University Chapel. Classes begin Thursday, Sept. 14.