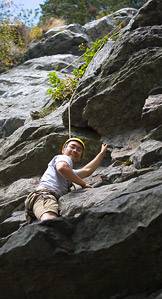 This year's Outdoor Action program added a new issue to its list of topics important for freshmen to know: sustainability. In addition to meeting classmates, building teamwork and learning about social life, diversity and respect for others, the new students discovered just how big their own carbon footprint could be. The lessons were woven in between the traditional activities of rock climbing, backpacking and canoeing. Here, George Che scales an 80-foot rock face for the first time in his life. 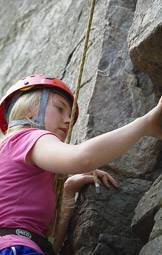 Freshman Julia Rees said after learning about what goes into catching, packaging and processing food such as tuna, she's going to be more careful with her own eating habits. 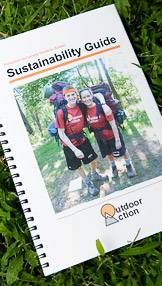 A sustainability guide prepared by consultant Jessica Kellett served as a resource manual on the trail. It includes information on the University's Sustainability Plan, background on climate change, games and activities, and readings. (Download a .pdf copy.)   Photos: Brian Wilson 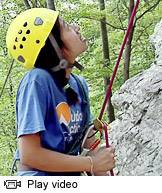 View a video of students on Outdoor Action's frosh trip learning about sustainability. 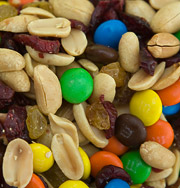 Even the gorp, that staple snack food for hikers, had locally produced ingredients, with dried cranberries and M&Ms from New Jersey.

George Che still had a week to go before his classes began at Princeton, but the freshman was already learning some lessons.

Hanging from a rope on an 80-foot rock face near New Jersey's Delaware Water Gap one morning earlier this month, he quickly was overcoming his fear of heights. Far from his home in suburban Boston, he was experiencing for the first time in his life what it was like to sleep outdoors overnight. Hiking along the trail, he was gathering a multitude of facts about humans' impact on the environment.

And he found out how quickly people become friends, despite differing backgrounds, when they spend six days together on wilderness adventures intended to build teamwork and leadership skills.

"I definitely will keep in contact with all the people in our group [when I return to campus]," Che said. "They've been really great to me and hopefully I've been able to return the favor." 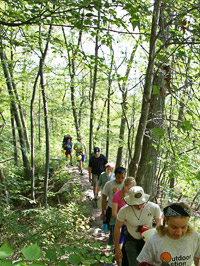 Some of the discussions about sustainability took place on the trail, while others occurred as the group sat down to eat.

Che was one of 700 entering freshmen -- 56 percent of the class of 2012 -- who elected to participate in Outdoor Action, Princeton's oldest and largest pre-orientation program. A total of 83 groups headed by 190 student leaders departed on Aug. 31 for backpacking, canoeing, rock climbing and other activities in eight states ranging from Vermont to Virginia. Another 145 freshmen were participating in the volunteer service-oriented Community Action program.

For the past 34 years, Outdoor Action trips have provided a fun-filled introduction to life at Princeton. In 1999, a more focused orientation program was introduced, training the student leaders to serve as better role models and to answer questions more effectively on topics including social life, alcohol, diversity, tolerance, respect for others and making responsible choices.

This year, another topic was added to the list: sustainability. Outdoor Action received support from the High Meadows Foundation this spring in the first round of initiatives funded under the University's new Sustainability Plan.

"Part of what we try to do is give students a really unique group experience in the outdoors with other freshmen," said Rick Curtis, director of Outdoor Action, "but what we hope they do is translate the things that they've learned out there back to campus, such as 'Wow, I got along with a bunch of people who were really different from me and I can do it when I get back to campus.' 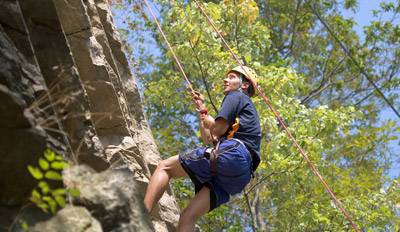 Freshman Ryan Ellis neared the top of the rock face in the Delaware Water Gap, where his group spent six days hiking, camping and climbing.

"So we said, 'How can we do that with sustainability?'" he said. "The High Meadows funding really made all the difference because it provided the support to research and develop a sustainability curriculum for Outdoor Action leaders."

Jessica Kellett, a consultant who has led environmental policy and education programs since graduating from Colby College five years ago and who also worked with the Princeton Student Environmental Communication Network this summer, put together the curriculum for Outdoor Action leaders to use on the trail, produced a sustainability guide for them as a resource manual and organized a day of leader training focused on sustainability.

During the training session, the leaders gathered in Dillon Gym to hear about the University's Sustainability Plan from Jeff Domanski, associate manager of the Office of Sustainability and a graduate student in the Woodrow Wilson School of Public and International Affairs. Stu Orefice, director of Dining Services, told them how campus dining halls have expanded to provide locally grown, sustainable food.

During leader training on sustainability, Jeff Hoaglund, education director for the Stony Brook-Millstone Watershed Association, discussed how to create an atmosphere in which the land plays an integral role in the students' experience -- as opposed to being a scenic backdrop.

They also learned about the changes made to Outdoor Action from sophomore Emily Sung. She and sophomore Colleen Driscoll spent the summer working for Outdoor Action as High Meadows Fund Sustainability Interns, exploring how to make the program more sustainable by researching alternatives for food, transportation and equipment for the trips, as well as better ways to handle waste. The leaders then broke into groups, listening to presentations and participating in exercises intended to increase their awareness of and knowledge about sustainability.

In addition to serving as an intern, Sung was a trip leader this year. She and senior Clay Puryear guided one of two expeditions designated as "eco-trips." These trips were outfitted with environmentally friendly equipment and had a more heightened focus on sustainability. 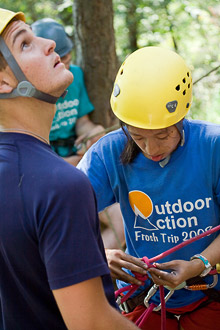 Leader Emily Sung secured the rope for freshman Dash Adam before he made the climb.

Back in the New Jersey Skylands, Sung perched on a rock discussing the challenges of the work as her group members took turns climbing with Puryear and sophomore support staff member Robert McGibbon belaying.

"The main goal is to get our students to come back to campus with a slightly different attitude toward their impact on the environment," she said. "On the trail, sustainability is woven into the activities that we do and the meals that we eat. So for instance, some of the meals this year are a little different from last year. We mixed in some wild-caught salmon with the pouched tuna we normally get. Some of the packs [and sleeping bags] are made out of recycled soda bottles. And if we're sitting down and eating a meal that was grown or produced locally, then we'll open up a conversation about it."

Like many issues she investigated this summer, Sung said the salmon versus tuna question is "pretty complicated" and highlights some of the challenges of identifying how to purchase more sustainable products.

While the tuna is fished in the north to mid-Pacific and then sent to Ecuador for packaging the interns say the fishing practices are less sustainable. The salmon, they say, is produced in some of the best-run fisheries in the states, but is sent farther away to Thailand for processing. 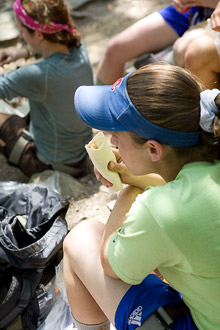 Freshman Lexi Johnson enjoyed salmon on a tortilla during lunch.

"Although the salmon has to travel farther to reach us, its comparison to tuna in terms of sustainability is anything but straightforward," Sung said. "Colleen and I couldn't say for sure which product is ultimately the better option, but we thought that for the purposes of education it would be worth mixing it in the menu so that we could talk about it."

Sung admits it is difficult to change people's habits, but she hopes the new curriculum has made some impact on the freshmen.

"I think that we're getting them to think a little bit outside the box, and that's definitely a step forward," she said.

The discussions have had an effect on Julia Rees, a freshman from Bethesda, Md., in Sung's group. "The carbon footprint for a little pouch of tuna fish is just way too large," she said. "Having heard just how much transportation goes into catching, packaging, processing food, I'm going to be a lot more careful in my own life. I'm going to take that with me. I'm going to tell my family all about it. We eat a lot of tuna. I'm going to try to get them to switch to salmon. As soon as I get my cell phone back, I'm going to call my mother and tell her that."

George Che said the talks during the trip have made him think about transportation choices and changed his opinion of the recycling program in his hometown of Malden, Mass. "I wasn't really conscious about how humans do so many things that pollute the environment," he said. "This has really opened my eyes. Going back home, I think I won't drive my car so much and will recycle more."

On their return to campus, groups previously would bring along their waste from each trip. This year, they also were asked to sort it.

Freshmen and their leaders arrived back at Princeton Stadium on Friday, Sept. 6, where a variety of receptacles were set up to take the trash from the trail.

"We have regular trash, such as granola bar wrappers, dirty plastic bags, basically waste that is human-generated in some way," Sung said. "Then we also have a compost bag for items like orange peels, rotten peppers, uneaten vegetables or fruit waste. Then we have another bag, which is for other kinds of food waste like uneaten macaroni and cheese." 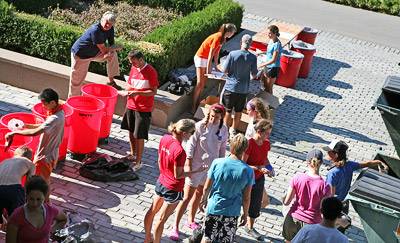 Princeton Stadium was set up with receptacles to receive the sorted trash the Outdoor Action groups brought back from their trips. Much of the material was recycled, rather than being sent to a landfill.

Unopened food items were sent to the Trenton Area Soup Kitchen. Fruit and vegetable waste was sent to a compost pile in the student-run organic garden at Forbes College. Miscellaneous leftover food was sent to a pig farmer who receives food waste from the University's Dining Services. Clean plastic bags leftover from double-bagging were headed for a recycling facility. And the rest would go to a landfill.

While Curtis received immediate positive feedback from many students, he said he looks forward to seeing the results of a Web-based survey so he and his staff can further refine the sustainability initiative for next year's trips.

"Outdoor Action provides a fantastic small-group environment for exposing students to really important issues that they will need to deal with for the next four years as students at Princeton," he said. "Hopefully, we're doing our part to help students understand that by making certain choices we all can have an influence on what happens both in the world on campus and the world outside."