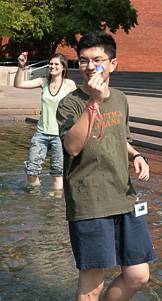 At the pre-orientation for newly arrived international and exchange students, held Sept. 4-7 to introduce them to life at Princeton, games such as a scavenger hunt helped students get to know the Princeton campus. Charles Li, a member of the class of 2011 from Australia, plunged into the Scudder Plaza fountain and discovered poker chips under his feet as part of the hunt.

Top and middle left: Following further clues for the scavenger hunt led the new international students to the cannon in front of Cannon Club, where they found a bundle of chocolate candies. 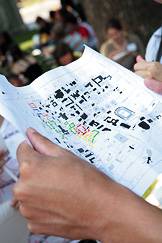 Students checked out the campus map for the scavenger hunt. Bottom left: The pre-orientation program for international students provides an introduction to Princeton's academic and extracurricular offerings as well as an opportunity for students to get acquainted. "We want them to have an opportunity to meet each other. Sometimes that's the hardest part for international students," said Rachel Baldwin, an assistant dean in the Office of the Dean of Undergraduate Students and the event's organizer. Photos: Denise Applewhite

Ninety-four international students hailing from 38 countries got a hands-on introduction to Princeton University last week by fishing poker chips out of the Scudder Plaza fountain, doing push-ups on the top floor of Fine Tower and finding an upperclassmate in Firestone Library just by using the barcode of a nearby book. The scavenger hunt assignments were part of a four-day program tailored to introduce newly arrived international and exchange students to life at Princeton.

"We want to provide them with a pipeline to everything Princeton has to offer," said Rachel Baldwin, an assistant dean in the Office of the Dean of Undergraduate Students and the organizer of the Sept. 4-7 international pre-orientation. "And we want them to have an opportunity to meet each other. Sometimes that's the hardest part for international students."

Students found lots of other friendly faces during the program's lunches, game nights and, of course, the scavenger hunt, which split the group into teams of eight students who were sent all over campus and into town to accomplish 14 Princeton-related assignments, including singing a song together while accompanying themselves on a piano at Forbes College, visiting Hoagie Haven and looking for a chocolate surprise in the cannon outside Cannon Club.

"I'm meeting lots of people from all over the world," said Cristina Popa, who is from Romania, as she shared pizza with other students at a lunch outside Whig Hall last Thursday. "It's been really interesting, and I've made a couple of friends so far."

The lunch was an opportunity for the students to sample kettle corn and snow cones and to mingle with each other and with new graduate international students.

"I see a lot of international students, which I didn't expect," said Sara Munoz, a graduate student from Spain. "It's good to connect with them at the beginning. Once you get into your program, it will be more difficult."

Veteran international students served as volunteers during the program to guide the new freshmen through their introduction to campus.

"The program was so helpful to me last year, so I came back to volunteer to help this year," said Auxilia Munhutu, a sophomore from Zimbabwe. She and 13 other upperclassmen explained residential college life, helped students move into their rooms and organized game nights. 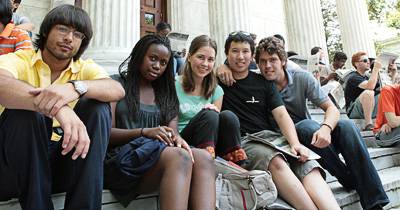 Two-thirds of all incoming international and exchange students attended the international pre-orientation, which included a session that introduced them to the many student organizations on campus, a tour of the campus libraries, a presentation about community service at Princeton and a shopping trip to purchase essentials for school.

Nelson Chiwara, who is from Zimbabwe, said the program has gotten him acquainted with the campus and much more. "It has helped me to get used to the American way of life and culture," he said. He also enjoyed the shopping excursion. "I love Wal-Mart."

Nithiya Muthusamy, a native of Malaysia, was happy to have been introduced to the international community.

Other members of the freshman class participated in Outdoor Action and Community Action pre-orientation programs Sept. 2-8, which welcomed students to Princeton by offering opportunities to make new friends while taking part in outdoor and volunteer activities.

Students participated in 74 Outdoor Action trips across eight states, including an excursion of canoeing, rock climbing and trail restoration at the Princeton-Blairstown Center in northern New Jersey. Community Action brought students to 12 sites in Princeton, Trenton and Philadelphia, where they prepared food at a soup kitchen, repaired houses in an urban renewal project and stocked shelves at a food pantry. A total of 758 freshmen were involved, while upperclassmates provided guidance as leaders and mentors.