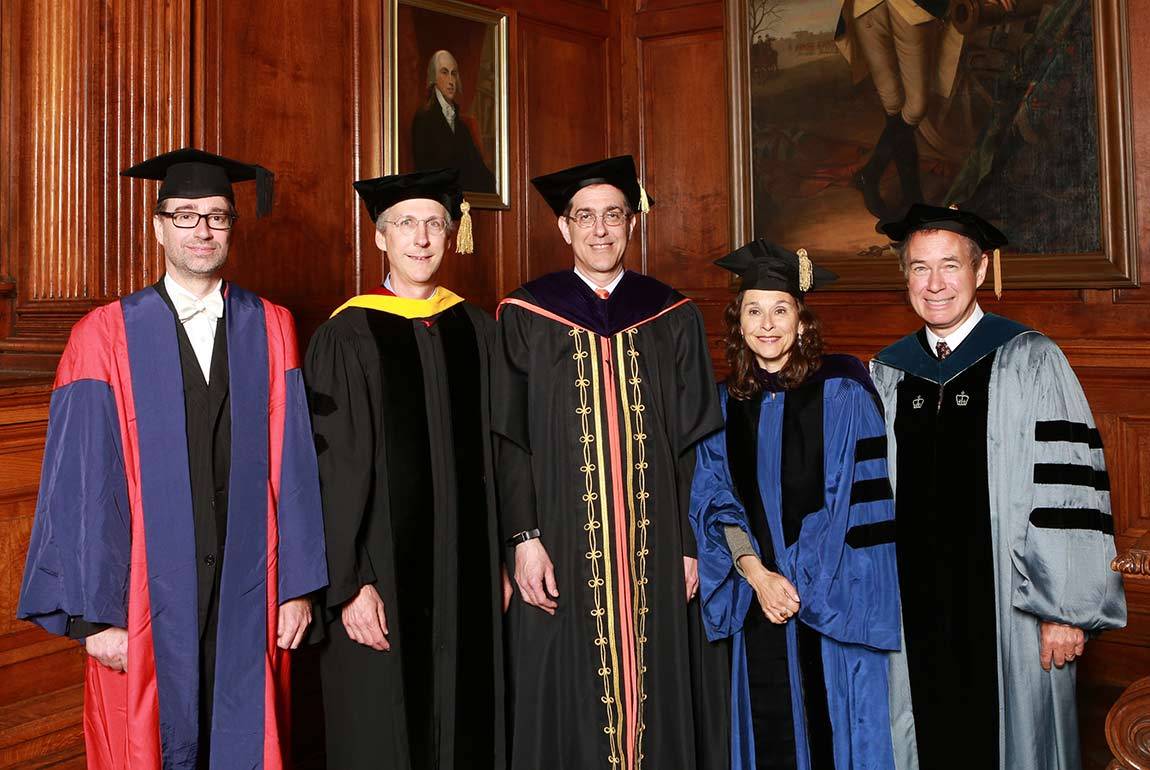 Hughson, a faculty member since 1994, specializes in structural cell biology with a particular focus in intracellular transportation and quorum sensing of bacteria.

A faculty member noted that Hughson is a "truly great science teacher" who redesigned the required lecture course for molecular biology majors, "Biochemistry," in a way that "inspires our students to understand and deduce, rather than to memorize." He also developed a core biochemistry course for graduate students that successfully "molded the students into thinkers and made it so they could be successful in graduate school."

One undergraduate described taking Hughson's "Biochemistry" course as "a lot of fun," made more so by Hughson's approach. "He has an endearing way of speaking about his material — you know he thinks the science is awesome, and he conveys his enthusiasm in his lectures in such a way that you start to get genuinely, I-will-bring-this-up-at-the-dinner-table excited about things like biotin's swinging arm or ATP synthase."

Graduate students, who have learned about gifted teaching from Hughson, also value him as a mentor. "Top to bottom he is an exemplary mentor," said one graduate student. "He is extremely smart and constantly challenges me to explore new topics and push myself to become better in all facets of my research."

In addition to teaching University students, Hughson has directed the HHMI summer program at Princeton for high school science teachers from across the United States and Canada. "Thus, students far removed from Fred's classroom benefit from his teaching skills: Fred's work is truly 'in the nation's service,'" stated a colleague.

Morison, who has served on the faculty since 2009, specializes in ancient philosophy. His scholarship focuses on logic, physics, geometry and epistemology in Plato, Aristotle and the Hellenistic period.

Colleagues underscore Morison's talent in bringing his material to life. A faculty member who has co-taught graduate seminars with Morison said, "The one feature of his teaching that has always impressed me is his astonishing ability to make the subject matter he presents accessible and engaging to his students, whether they be beginners with little or no background, or specialists in his own field, ancient philosophy."

A Ph.D. candidate highlighted Morison's attention to the work of individual students, noting that "among Professor Morison's many exemplary qualities, what I find most striking is his ability to combine the highest level of academic scholarship with a deep concern for the pedagogical needs and individual strengths of his students."

With a record of teaching at Princeton that a colleague described as "truly staggering," last summer Morison added to his repertoire a course on Plato taught in Berlin for undergraduate students interested in philosophy. One student said Morison was "the perfect instructor" for such a course. Added another student: "A great professor does much more than just 'profess' — he or she should also aim to help students refine their perception of the world within the context of a particular discipline. That is exactly what Professor Morison helped me and my class achieve." Morison will teach "Plato in Berlin" again this summer.

Prucnal, who joined the Princeton faculty in 1988, focuses on investigating ultrafast optical techniques with application to communication networks and signal processing.

Prucnal is highly regarded as a mentor. One former undergraduate student embarking on graduate study in engineering said Prucnal was "incredibly kind and encouraging" even when the student changed his academic focus to electrical engineering and entered his class two weeks late. A current student said that Prucnal "tirelessly explains concepts until they are crystal clear," and would "go out of his way to understand his students' problems and offer meaningful advice."

Students appreciate Prucnal's efforts in expanding their research opportunities in the classroom and in his research lab. A graduate student who has served as Prucnal's teaching assistant underscored his emphasis on the "importance of quality laboratory work in supporting class material" and his eagerness to "include class demos to complement his teaching." Prucnal is known for stimulating creativity in a course, such as by introducing class projects such as the development of an electrocardiogram system, for which Prucnal "always volunteered to come down to the lab" and also "hook himself up" to the students' electrical circuits.

In referring to Prucnal's "calling" and "joy" as a teacher, a colleague emphasized his successes through three main points: "Paul's students are unmatched in their ability to communicate their scientific achievements; they are unmatched in their intellectual independence and ability to self-study; and Paul's record in winning teaching awards given by student selection is unmatched."

Noted one graduate student: "Prucnal's group is a big family . . . For me, Professor Prucnal is an amazing teacher, an excellent adviser and a kind friend."

Schor, who has served on the faculty since 1986, is a scholar of British Romanticism and literature, scripture and religion.

Known as "Starry" to her colleagues, she is valued as an innovative teacher who has "made her mark on multiple corners of the University's curriculum." Noted a faculty member: "She is a humanist in the best tradition, a believer in the importance of words and ideas to human existence, a creative and often wry commenter on the sad human condition, and a teacher who suggests the deep value of great literary texts with subtlety and compassion."

Students emphasize the sense of community Schor brings to the classroom. One undergraduate recalled reading a poem as a group at the end of Schor's first class on poetry. "Together we chanted, at first shy, and soon — via her encouragement — communal, in no time drumming on our thighs, rejoicing in the silliness of the sounds and the power of naming. Professor Schor fostered this environment, one in which the class was able to engage with the poetry without self-consciousness."

Noted a graduate student, "She is deeply invested both in sharpening her students' critical thinking and in fostering a community of collaboration, which, as she has revealed, in many ways go hand-in-hand."

A former student, now a novelist, described Schor's influence on her life: "Starry Schor was my hero (I was not unique in this), and became a friend. In her class I fell in love with certain poets and writers, yes; more than that I learned that understanding English literature is a way of understanding oneself."