by Katherine T. Rohrer for the Office of the Dean of the Graduate School

The Graduate School has presented nine graduate students with its annual Teaching Awards in recognition of their outstanding abilities as teachers. An additional one-time Service in Teaching Award also was granted this year. 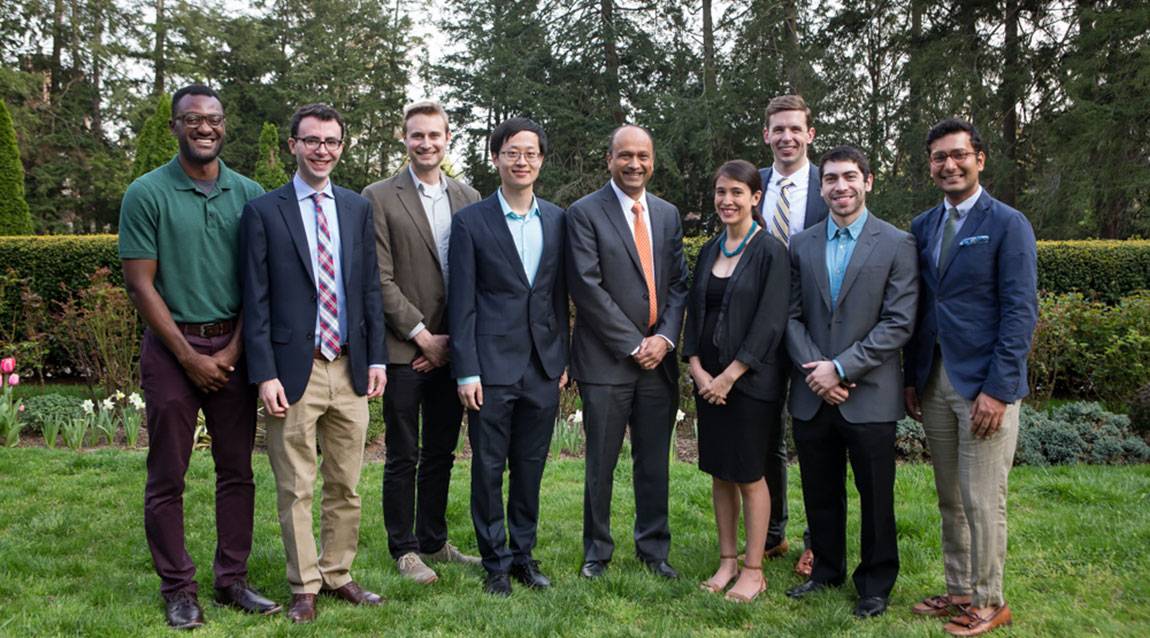 Winners were selected by a committee chaired by the Dean of the Graduate School Sanjeev Kulkarni and comprising the academic affairs deans and staff from the McGraw Center for Teaching and Learning. The pool of nominees was put forward by academic departments and programs.

On April 20, the Graduate School presented the awards at the Tribute to Teaching Reception, which Kulkarni hosted. Each winner receives $1,000.

Daniel Blank is a sixth-year Ph.D. student in English and was nominated for his innovative teaching assistance in ENG 320, "Shakespeare I." Professor of English Jeff Dolven relates that Blank, a student of Renaissance drama, has in four separate semesters "organized a troupe of actors from the students in my lecture course. He got to exercise his theatrical and pedagogical curiosities, and I got a series of lively examples to draw on as I lectured — scenes I could conjure at the snap of my fingers." According to a student in his precept in 2016: "Dan pushed me to develop my work by heightening my curiosity about the material with his flexibility and detailed feedback. I cannot sufficiently articulate how much Dan's enthusiasm and dedication shaped my approach not only to this particular course, but also to my overall outlook on immersing myself in each of my classes." Blank expects to complete his degree in 2018.

Jorge Gaupp Berghausen, a fourth-year Ph.D. student in Spanish and Portuguese, was nominated for his teaching in SPA 207, "Studies in Spanish Language and Style."  The head of course, Lecturer Mariana Bono, called him "a gifted and patient instructor" who approached his teaching "with maturity and enthusiasm." One student described his embarrassing SPA 207 debut — mispronouncing his own name in Spanish — to which Jorge responded by writing on the board "in all capital letters, 'COMETER ERRORES' [make mistakes]." This student added: "Jorge made it clear that he wanted class to be interactive, engaging and helpful to all of us as Spanish speakers. This message that he put forth so clearly on the first day of class set the tone for the rest of the semester, especially for me. By the end of the semester, instead of being scared to mispronounce my name, I was fearlessly raising my hand for almost every question." Another student agreed that Berghausen had "mastered the mysterious alchemy, creating an environment in the classroom that made it easy for everyone to speak up and make mistakes loudly, which is the only way to learn a foreign language." Berghausen plans to finish his degree in 2018.

Marcus Johnson is a sixth-year Ph.D. student in politics and the winner of the Quinn Morton Graduate Teaching Award for instructors in the Princeton Writing Program. He taught his writing seminar, WRI 186, "Politics and Identities," for the first time last fall. According to the director of the program, Amanda Wilkins, "His impressive course evaluations, as well as a classroom visit, revealed a deeply committed, intellectually challenging teacher who motivates his students as colleagues in the enterprises of deep reading, critical thinking, research and writing." His demanding course draws on source material from James Madison's Federalist Papers to Barack Obama's 2016 State of the Union address to the lyrics to "Hamilton." "Marcus Johnson is a phenomenal professor," wrote one student, "who prioritizes his students and makes sure they are successful." Commented another: "I have learned so much that I don't know where to begin. Not much is left of what was once my high school writing." Johnson expects to complete his degree this year.

Jonathan MacArt is a fourth-year Ph.D. student in mechanical and aerospace engineering.  He served as an assistant in instruction (AI) for MAE 427, "Energy Conservation and the Environment: Transportation Applications" and MAE 335, "Fluid Dynamics." According to Assistant Professor of Mechanical and Aerospace Engineering Michael Mueller, "Jon showed a tremendous ability to be able to explain concepts to students in a variety of ways that helped them better understand the course material. He provided hand-written notes on his precepts that were universally praised by the students for their clarity." One student said: "He did not give us the answers to problem set questions during office hours as many TAs do. Instead, he challenged us to work through problems ourselves. His answers to our questions were never yes/no, but 'what do you think?' and 'why?', which encouraged us to really dig deep into the equations and theorems we were presented with, rather than accept a relation as true just because it was written that way in the textbook." MacArt expects to finish his degree in 2018.

Mayank Misra is a second-year graduate student in the science, technology and environmental policy (STEP) track of the Ph.D. program of the Woodrow Wilson School of Public and International Affairs. He was nominated by David Wilcove, professor of ecology and evolutionary biology and public affairs, and by Jin Sato, visiting professor of public and international affairs, for assisting in WWS/ENV 350, "The Environment," and for serving as a graduate consultant to the undergraduate task force "Mainstreaming Environment in Asia." Sato praised Misra's accessibility to students and "tailor-made mentoring." Noted Sato, "He was not only approachable but also offered the right advice depending on the personality and the situation of the student in question." Undergraduates hailed him as "the most ridiculously amazing preceptor I have ever had"; "phenomenal"; and "not only incredibly knowledgeable, but truly funny, engaging and kind." Misra expects to finish his degree in 2020.

Rebecca Napolitano is a second-year graduate student in civil and environmental engineering. She served as an AI for three courses: CEE 361/MAE 325/MSE 331, "Matrix Structural Analysis and Introduction to Finite-Element Methods"; CEE 102, "Engineering in the Modern World"; and CEE/LAS 463, "A Social and Multi-Dimensional Exploration of Structures." She was nominated by Associate Professor of Civil and Environmental Engineering Branko Gli?i?, who described Napolitano's magic in an 8:30 a.m. precept: "She managed to create an incredibly awake and positive learning environment where students from different departments will speak the same language, and eagerly and intensively collaborate on solving the problems. Every success was loudly cheered by students, and I could witness widespread genuine joy that students felt when learning." According to one of her many students, "Becca did not feed us answers, but rather guided us to think about problems and different ways of solving them, giving us transferable skills." Another spoke of her "dedication to teaching and natural ability to excite academic curiosity in her students."  This spring, Napolitano will complete the M.S.E. degree and then continue on in her department's Ph.D. program.

Anibal Velozo is a fourth-year graduate student in mathematics, who this year taught MAT 201, "Multivariable Calculus." Lecturer in Mathematics Christine Taylor describes Velozo as "a master teacher" whose students not only give him exceptional ratings but also fare significantly better than the norm on course-wide exams: "I think the secret to Anibal's success is that he trusts that his students will appreciate mathematics if mathematical ideas can be shown to be simple and natural rather than hard and strange." As one of his students related: "His teaching style was amazing; he could explain the rather abstract and difficult-to-visualize 3[SP1]-dimensional concepts with exact drawings and explicit, simple descriptions. Anibal guided me to an innate understanding of the material." Velozo expects to finish his degree in 2018.

Elise Wang is a seventh-year graduate student in comparative literature and assisted simultaneously in HIS 380, "The History of U.S. Foreign Relations," and CHV 375/COM 364/ENG 374, "Clues, Evidence, Detection: Law Stories." Peter Brooks, lecturer with the rank of professor in comparative literature and the University Center for Human Values, described how Wang met individually with each student in her precept at the beginning of the semester to discuss "their preparation for the course (and its writing assignments), their expectations for what they would learn, and how it fit into the rest of their program at Princeton. She came to know her students, their limits and capabilities, extremely well." Her students singled out her ability to maximize their participation in precept: "She has a rare gift for sparking discussion — bit by bit, she'd coax out our opinions and stances before directing the conversation towards a particularly interesting topic to set the class ablaze." She expects to complete her Ph.D. degree this year.

Ziwei Zhu is a fourth-year Ph.D. student in operations research and financial engineering.  He was independently nominated by the faculty instructors in both courses in which he assisted as Head AI, ORF 350, "Analysis of Big Data," and ORF 245, "Fundamentals of Statistics." Jianqing Fan, the Frederick L. Moore, Class of 1918, Professor in Finance, professor of operations research and financial engineering, and director of the Committee for Statistical Studies, commented on the complexity of teaching a first course in statistics to students with widely varying backgrounds. He said that Zhu "took the leading role in the development and teaching of this challenging course and made significant and profound contributions throughout the semester. He is passionate about bringing interesting and concrete problems or examples to our undergraduate students and cultivating their interest in statistics." As one student described it, "Ziwei is knowledgeable, approachable and clear. His teaching was instrumental in helping me succeed in the course." Another praised his patience and called him "very talented at explaining complex concepts to beginners." Zhu expects to finish his degree in 2018.

Matthew Spellberg, a sixth-year Ph.D. student in comparative literature, is being honored with a one-time Service in Teaching Award for his extensive work with the Prison Teaching Initiative (PTI), for which he has taught eight courses since 2011. He was nominated by Jenny Greene, professor of astrophysical sciences, and who is the math and science co-chair of the PTI Leadership Committee. Thanks to a grant (which he co-wrote) from the University Center for Human Values, Matthew was able to teach separate precepts in CHV 375/COM 364/ENG 374, "Clues, Evidence, Detection: Law Stories," on the Princeton campus and within the Edna Mahan Correctional Facility in Clinton, New Jersey. The project concluded with a joint precept conducted at the prison, "in which students from these very different environments found common ground in a discussion of literary and judicial texts," said Greene. She added, "Matt has brought a unique educational experience to those in Princeton by taking them inside prisons and outside their daily lives." Spellberg plans to finish his degree this year.