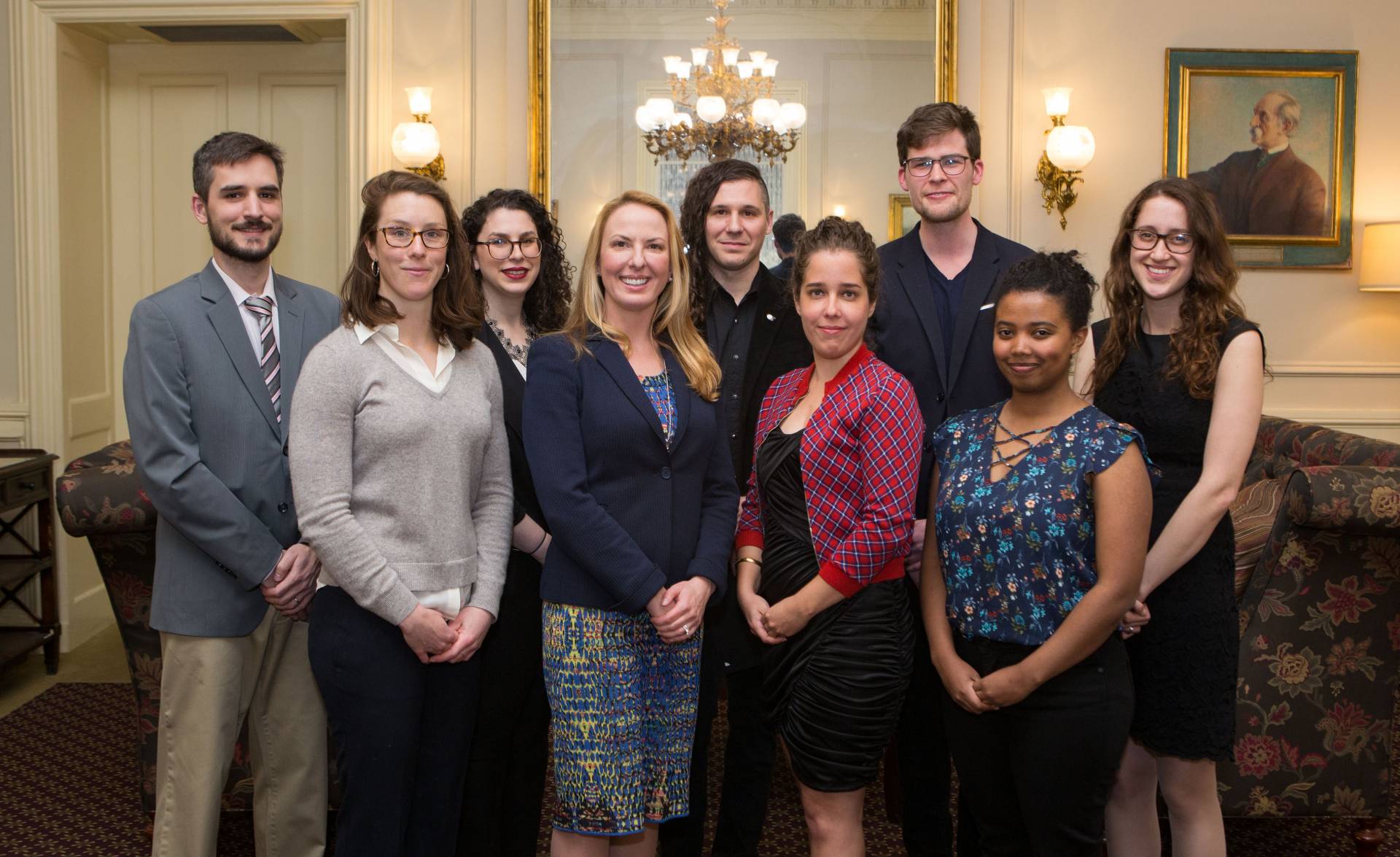 The Graduate School has presented eight graduate students with its annual Teaching Awards in recognition of their outstanding abilities as teachers.

Winners were selected by a committee chaired by Cole Crittenden, deputy dean of the Graduate School, and comprising the academic affairs deans and staff from the McGraw Center for Teaching and Learning. The nominations were made by academic departments and programs.

Brioso Rieumont is a third-year Ph.D. student in Spanish and Portuguese. She served as an assistant in instruction (AI) in “Intensive Beginners and Intermediate Spanish,” a preceptor in “Masterpieces of Latin American Literature,” and course administrator for the 500-level “Seminar in Archival Research.”

“This was the first time Ingrid taught a literature course but I would not have guessed it: she ran her section with such enthusiasm, professionalism and good energy that it seemed as if she had been teaching on her own for years,” said Rubén Gallo, the Walter S. Carpenter, Jr., Professor in Language, Literature and Civilization of Spain, about Brioso Rieumont’s work as AI for “Masterpieces of Latin American Literature.”

“In all those teaching experiences, Ingrid distinguished herself as an intelligent, resourceful and extremely creative and engaged educator,” said Alberto Bruzos Moro, senior lecturer in Spanish and Portuguese and director of the Spanish Language Program. Brioso Rieumont planned and coordinated several notable experiences for her students outside the classroom, including a trip to see a play at the Spanish Reperatory Theatre in New York. “Ms. Ingrid was a stellar teacher who went beyond what was required to ensure that our entire class was learning,” said a student. Brioso Rieumont expects to complete her degree in 2020.

Iannarone is a sixth-year graduate student in comparative literature. He was an AI for “American Cinema” and “Topics in American Literature: Henry James and William Faulkner.” Iannarone also has organized and run the department’s undergraduate thesis and junior-project writing “Boot Camp” for the past three years.

“This workshop is a keystone of the way that we prepare students for the ambitious and complex writing projects they undertake, and Antonio’s work here has been outstanding,” said Ben Conisbee Baer, director of graduate studies and associate professor of comparative literature.

“Walking around campus together while discussing the premise of my first essay on Jason Compson [from ‘The Sound and the Fury’] was what pulled my ideas from a hazy scattering into a distinct argument,” said a student. “Antonio’s ability to challenge and synthesize what I was saying helped me see what details in the text and notions on the whole I was missing.” Iannarone expects to complete his degree in 2019.

Lemma is a second-year doctoral candidate in chemical and biological engineering. She was nominated for her work teaching “Introduction to Chemical and Biological Engineering Principles.”

“Annabel committed an extraordinary amount of time assisting the students with the course material, and she was an approachable and valuable resource for students who had just begun the engineering curriculum or had recently declared CBE as their intended major, which are often two times of high anxiety in an undergraduate’s education,” said Mark Brynildsen, associate professor of chemical and biological engineering.

Students said Lemma distinguished herself as an instructor through her accessibility, her patient and detailed explanations and her calming influence. “When I confided in her, Annabel helped me assuage my fears in adjusting at Princeton and the rigor of the engineering program,” said a student. “She reassured me that everything would work itself out and explained how everyone felt overwhelmed and that I should not worry too much.” Lemma expects to finish her degree in 2021.

Nielsen is a fourth-year Ph.D. student in economics. He served as teaching assistant for “Introduction to Macroeconomics” and “Economics of the Labor Market.” Elizabeth Bogan, senior lecturer in economics, said she knew within the first two meetings with her preceptors that Nielsen was “a rare find.”

“He went beyond what I ask of my preceptors and distributed handouts on the key elements of the precept each week and posted them on Blackboard for all the students in the course if they wished to read them,” Bogan said.

“When it came to time outside of the classroom, he was incredible,” said a student. “Another unique aspect to his help was his ability to reply within minutes on email,” remarked another student. “I personally took huge advantage of this and must have sent him 20 emails over the course of a week before the final. Each one [received] a detailed and comprehensive reply.” Nielsen expects to complete his degree in 2020.

Robinson is a seventh-year doctoral candidate in history and a recipient of the Quin Morton Graduate Teaching Award for instructors in the Princeton Writing Program. Her writing seminar, “Justice After Empire,” invites students to explore questions about justice and reconciliation in post-colonial Africa in the late 20th century.

“Morgan has demonstrated remarkable skill at leading her students to cultivate their critical curiosity and to deepen their sense of why scholars research and write the way they do,” said Amanda Irwin Wilkins, director of the Princeton Writing Program. “With her guidance, Morgan’s students gain a very real sense of how their arguments, as junior scholars, can join wider conversations at both the university and in public life.”

Said one student: “I now know how to engage with other authors and understand exactly where my contribution to the academic discussion starts.” Another student commented, that with Robinson’s guidance, “my writing has changed from just regurgitating information to contributing to the scholarly debate.” Robinson expects to finish her degree this year.

Schlesinger is a third-year graduate student in geosciences. She taught precepts for the interdisciplinary course “Environmental Geochemistry: Chemistry of the Natural Systems.”

“She can explain the most difficult concepts in chemistry in the simplest ways so students can follow the course content well,” said Satish Myneni, professor of geosciences. “Not only non-chemistry majors appreciated her help, but also the chemistry majors for in-depth discussions.”

Schlesinger created problem sets for the course using environmental disasters, such as drinking water problems in Flint, Michigan. She also was exemplary in her mentorship. “I have never had a preceptor that opened up so much of her free time to help us with any questions we may have,” said one student. Said another: “Danielle was extremely approachable during class and was always available to help outside of it. She would frequently schedule individual meetings in addition to holding regular office hours, so that no student felt left behind.” Schlesinger expects to finish her degree in 2020.

Schwab is a fourth-year doctoral candidate in psychology. She served as an AI for “Psychology of Gender” and “Cognitive Psychology,” and as head AI for “Developmental Psychology.” Casey Lew-Williams, assistant professor of psychology, called her “a golden example of sciencehood, teacherhood and personhood.” He also praised her mentorship. “Her students rave about her, in essence, treating her as a role model,” he said.

“She went above and beyond what any previous assistant instructor has done in my classes,” said a student. “Her precepts are always engaging, and she makes sure that student participation is voluntary.”

Schwab has volunteered with the Prison Teaching Initiative. As a graduate teaching fellow, she has led orientations, developed materials and taught fellow AIs at the McGraw Center. She also has performed classroom observations for her peers and is co-developing a pedagogy workshop. Schwab expects to complete her degree this year.

Taunay is a fourth-year graduate student in mechanical and aerospace engineering. He served as an AI for “Microprocessors for Measurement and Control,” “Aircraft Flight Dynamics” and “Automatic Control Systems.”

Michael Littman, professor of mechanical and aerospace engineering, said Taunay learned how to design the microcomputer for his class ahead of time and guided students to develop their own designs. “The trick in instruction is to guide — not do it,” Littman said. “I was very impressed with his skills as an instructor.”

Said a student: “I’ve had Pierre-Yves as a TA for two classes now, and each time, his kindness, enthusiasm and hard work have made him stand out as an exceptional TA.” Commented another student: “The duration and difficulties of [‘Microprocessors for Measurement and Control’s'] final project was making everyone involved frustrated — except for Pierre-Yves. We wouldn't have been able to complete our project without him.” Taunay expects to finish his degree in 2020.