The Graduate School has presented nine graduate students with its annual Teaching Awards in recognition of their outstanding abilities as teachers.

Winners were selected by a committee chaired by the Dean of the Graduate School Sanjeev Kulkarni and comprising the academic affairs deans and staff from the McGraw Center for Teaching and Learning. The pool of nominees was put forth by departments and programs.

On April 26, the Graduate School presented the awards at the Tribute to Teaching Reception, which Kulkarni hosted. Each winner receives $1,000. 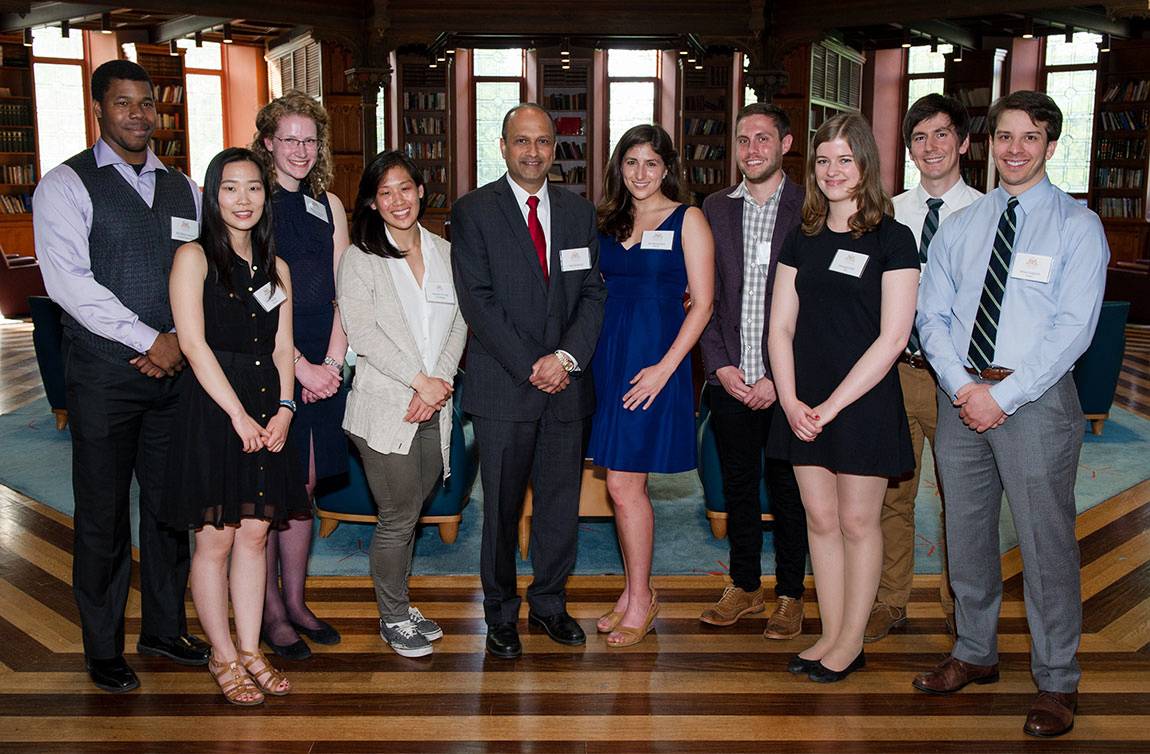 Brockett is a fourth-year graduate student in psychology and an assistant in instruction (AI) for "Introduction to Psychology" and "Psychopathology." Chair of the Department of Psychology Elizabeth Gould said in nominating him that "Adam is a truly gifted, innovative and dedicated teacher with talents teaching in multiple settings, including lab sessions, precepts and at the bench, as well as with students of various levels ranging from non-science majors to advanced students engaged in laboratory research projects." One student wrote: "Adam values his field and communicates his passion like no AI I had known before. He knows how to challenge a class and instill a foundation of excellence and desire to learn in his students." In addition to teaching current Princeton students, Brockett has also taught and mentored several undergraduates from other institutions during the past two summers through the Princeton Summer Undergraduate Research Experience program and the Princeton Neuroscience Institute Summer Internship program. Brockett expects to complete his Ph.D. in 2017.

Buonaiuto is a third-year graduate student in history and served as an AI for the courses "The Soviet Empire" and "The Western Way of War." Said Chair of the Department of Sociology Miguel Centeno, for whom Buonaiuto taught three precepts: "Zoe was rated higher than the course in all of her precepts and the comments singled her out as the best part of the class. I have only seen comments like this for a previous preceptor who also happened to be a Navy SEAL and brought an experience into the classroom that few could match. Zoe's familiarity with history and her great teaching skills equaled his 25-year career in the Navy as far as the students were concerned." One student commented that "Zoe is the most caring and thoughtful preceptor I have had here at Princeton. The time and effort she devoted to making sure my classmates ... not only understood the class material, but also engaged with it in entirely new ways, was something that set her apart." Buonaiuto expects to complete her degree in 2018.

Cheong is a third-year graduate student in sociology and social policy and served as a preceptor for the course "Government, Poverty and Inequality in Modern America," and also for the course "Race and Ethnicity." Senior Lecturer in Sociology Patricia Fernandez-Kelly, who worked with Cheong for nearly three years, wrote: "She is a dedicated instructor who goes beyond the line of duty in order to make learning exciting for undergraduates. She is able to condense information in ways that benefit individual discovery and comprehension." A student said: "One thing I really appreciated about Amanda as a teacher is that she consistently asked us to relate reading back to our own experiences. I believe Amanda's tactic of moving the discussion from theoretical to personal gives everyone a common language that make the issue of race easier to understand and discuss." The student continued, "More than anything, Amanda has a wonderful, warm energy that made coming to a 9 a.m. precept not only bearable, but enjoyable." Cheong expects to complete her degree in 2019.

Gingrich is a fifth-year graduate student in English and was a teaching assistant for several courses including "American Genres," "Children's Literature," "American Cinema," and "Short Stories." Professor of English Lee Mitchell, who co-taught two courses with Gingrich, described him as one of the three best graduate student teachers he has known over four decades at Princeton. Mitchell wrote: "Brian's brilliance as a mentor owes to something more than sheer familiarity with conveying ideas, grammatical or otherwise. More likely, his exceptional rapport with students is due to a genuine love for the give-and-take of intellectual conversation and exchange. Uniformly, students commented on his ability to lead discussions, to offer inspiring as well as informative introductory remarks, to elicit provocative readings and generally to inspire students." One undergraduate student simply stated, "As an aspiring graduate student in English, I can only hope to grow into the teacher that Brian is and to replicate this experience for others." Gingrich plans to finish his degree in 2017.

Hall is a fourth-year graduate student in operations research and financial engineering. She served as a teaching assistant for "Computing and Optimization for the Physical and Social Sciences," "Convex and Conic Optimization," and "Probability and Stochastic Systems," which had more than 200 students. In one semester, she eagerly served as an AI for two separate courses. Assistant Professor of Operations Research and Financial Engineering Amir Ali Ahamdi, who co-taught with Hall for four semesters, wrote: "She simply shined in both courses. And she won a teaching award from the Engineering Council for her performance in ORF 309." Professor of Operations Research and Financial Engineering, Emeritus, Erhan Cinlar added: "Georgina was one of the great teaching assistants. Her precepts were well attended, her grading was impeccable, and she was appreciated by the students for her ability to explain difficult matters of logic and analysis. Ever since, she was every faculty member's first choice for a teaching assistant." Hall expects to complete her degree in 2018.

Johannessen is a sixth-year graduate student in politics and social policy and the Quin Morton Teaching Fellow in the Princeton Writing Program. He served as teaching assistant for "Protest," "Politics of Developing Countries," and "Latin American Politics." Associate Director of the Princeton Writing Program Keith Shaw said: "In a very short time, Peter demonstrated that he is a first-rate instructor, inspiring students' best efforts and measurably improving their performance. His impressive course evaluations, along with in-class observation, reveal a deeply committed teacher who engages his students as colleagues in the scholarly enterprise." One student in his "Protest" writing seminar wrote, "I've learned a lot of useful techniques that I can use in my writing to better improve my argument. I feel that now I am a much more focused writer who has a better understanding of how to structure my work and present my material in a clear and engaging way." Johannessen will finish his degree in 2017.

Lee is a second-year graduate student in chemistry. She served as teaching assistant for numerous courses including "General Chemistry" I and II, and several courses on physical chemistry. Said Lecturer in Chemistry Robert L'Esperance: "Tia is always looking for ways to improve, and different methods to try. Tia is passionate about teaching, but at the same time knows how to have fun with it and is an excellent role model for women in STEM fields." One student commented: "Precept was my favorite part of the Chem class. After coming out of precept, I always felt like I had learned something and had a much better understanding of the material than I did before."  David B. Jones Professor of Chemistry Annabella Selloni, who co-taught with Lee, wrote: "At the end of the semester, the students had so much respect for Tia that one of them asked her for a reference letter for her summer research applications. Tia is absolutely [the] best teaching assistant I have worked with in my 15 years of teaching." Lee expects to complete her degree in 2018.

Verhey is a fourth-year graduate student in French. She served as a teaching assistant for "Beginner's French," "Intensive Beginner's and Intermediate French" and "Intermediate/Advanced French." In her nomination, Lecturer in French and Italian Murielle Perrier wrote: "On top of being an excellent teacher, Melissa is a caring person and generous colleague, both inside and outside the classroom. She contributed in many ways to the development of our class activities." Lecturer in French and Italian Vincent Chanethom added, "Melissa effectively accompanies her students in their learning process, acknowledging their previous knowledge, carefully introducing new information and staying available for further assistance beyond classroom time. Overall, Melissa knows how to put herself in the shoes of the learners, evidence of her genuine care for her students." Said one student, "I would not be the same had I not spent a semester under her instruction, and I would be eager to take another class from her in the future." Verhey plans to complete her degree in 2017.

Word-Daniels is a third-year graduate student in electrical engineering. He served as an AI for ELE 208, "Electronic and Photonic Devices," and in her nomination, Claire Gmachl, the Eugene Higgins Professor of Electrical Engineering and director of MIRTHE, described his efforts with this course. She wrote: "It was Akil who proposed and took upon himself to rework the Silicon Lab ... to give all students the very best lab experience. Akil designed a new lab project, taught it to his fellow AIs and guided 50 students through it; he did so on his own account and at significant extra workload for himself." Gmachl continued: "Akil made a real, positive and lasting difference for the students in ELE 208. He is one of the AIs who stands out far beyond the rest." One student commented, "Best Lab TA ever." And another added, "As far as the lab TAs go, Akil was my favorite. He was engaging and funny, but also dedicated to making sure everyone understood what was going on." Word-Daniels expects to complete his degree in 2018.