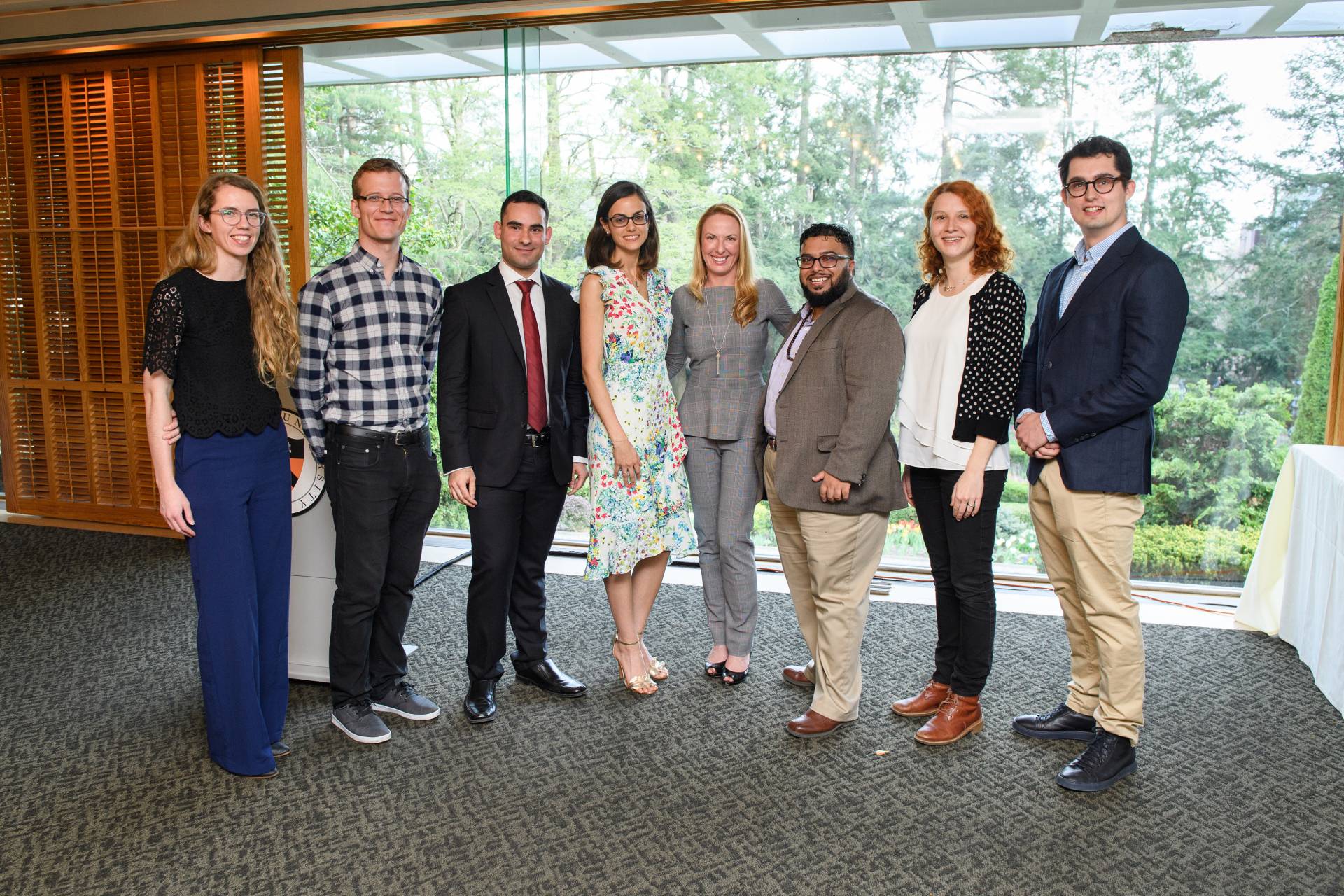 The Graduate School has presented seven graduate students with its annual Teaching Awards in recognition of their outstanding abilities as teachers.

Winners were selected by a committee chaired by Cole Crittenden, deputy dean of the Graduate School, and comprising the academic affairs deans and staff from the McGraw Center for Teaching and Learning. The nominations were made by academic departments and programs.

Elena Dugan is a third-year doctoral candidate in religion. She was nominated for her work as a preceptor for “Judaism, Christianity and Islam.”

“The best testimony to her success is not, I think, my words or even the words of her students, or the numeric evaluations,” said Moulie Vidas, associate professor of religion. “Rather, it is just how well-prepared her students were at the end of the semester.”

Students commented on Dugan’s ability to engage everyone in her precept through her subject knowledge, class activities and teaching style. “Elena is simply a master in her field,” said one student. “I’ve never taken a class where a professor can so easily hand the reins of a lecture to a preceptor and with such reward for all.”

Mattias Fitzpatrick is expected to graduate in June with a Ph.D. in electrical engineering (applied physics). He served as an assistant in instruction (AI) for “Foundations of Engineering: Electricity and Photonics.” He received the electrical engineering department’s Richard C. Hough Teaching Award and the Keller Center for Innovation in Engineering Education’s Outstanding Teacher Award.

James Sturm, the Stephen R. Forrest Professor of Electrical Engineering, said Fitzpatrick developed the entire lab component for the course, which was offered for the first time in spring 2018 to address the preparation of incoming engineering undergraduates. “Due to this new freshman physics/math sequence in the School of Engineering and Applied Science, approximately 20 sophomores are now majoring in engineering who would have otherwise transferred out,” Sturm said. “Mattias Fitzpatrick deserves the credit for a large fraction of this result.”

Said a student, “It has been very inspiring having a chance to learn from someone so passionate and enthusiastic about their field of study, who also has great skills in simplifying and clarifying the material.”

Emma Kast is a fifth-year Ph.D. student in geosciences. She has served four times as an AI for “Climate: Past, Present and Future.” She previously received the Arnold Guyot Teaching Award from the Department of Geosciences.

“Emma Kast is extraordinarily worthy of recognition for her contribution to undergraduate instruction at Princeton,” said Daniel Sigman, the Dusenbury Professor of Geological and Geophysical Sciences and professor of geosciences.

Students cited Kast’s “calm, thoughtful demeanor” and “her ability to make every lab accessible, relevant and engaging,” even for those with little lab experience or who were not pursuing science, technology, engineering or math (STEM) majors.

“My classmates and I felt very much at ease in asking any question, no matter how trivial or simple it might have been,” said a student. “From our many well-planned and inventive lab exercises, our confusion over any given topic was turned into natural curiosity, rather than frustration over misunderstanding of key topics.”

Laura Leal is a third-year Ph.D. student in operations research and financial engineering. She was nominated for her work as a preceptor for “Fundamentals of Statistics.”

“Being so close to the students, she understands the difficulties they experience, and being able to channel this information to the instructor of the class is invaluable,” said René Carmona, the Paul M. Wythes ’55 Professor of Engineering and Finance and professor of operations research and financial engineering. “I have found her insights to be extremely useful when preparing homework problem sets, [and] midterm and final exams, as she knows precisely how the students will fare, and how much further we can push them to achieve their best potential.”

Students said Leal was an enthusiastic instructor and dedicated to helping students understand course materials. “What truly sets Laura apart is the care and commitment she shows for each and every one of her students,” said one student. “More than any other preceptor I have had, Laura goes out of her way to ensure that her classroom is one in which everyone feels brave enough to try and safe enough to fail.”

Wasim Shiliwala plans to receive his Ph.D. in Near Eastern studies this spring. He served as the Quin Morton ’36 Teaching Fellow in the Princeton Writing Program, teaching a writing seminar titled “iPray” that examines the intersection of religion and technology.

“In a very short time, Wasim has already demonstrated remarkable skill at leading his students to deepen their sense of why scholars research and write the way they do; to cultivate their own critical curiosity; and to practice crafting arguments that contribute to wider conversations at both the University and in public life,” said Amanda Irwin Wilkins, director of the Princeton Writing Program.

“Wasim Shiliwala is an amazing, patient and humble teacher who helped me every step of the way,” said one student.

“I loved going to class,” said another. “It was a lot of fun, and Wasim helped to encourage student conversation/debate.”

Sorg-Langhans is a fourth-year Ph.D. student in economics. He taught multiple precepts for “Introductory Microeconomics” and previously received his department’s Graduate Teaching Prize.

“George’s teaching is lively and enthusiastic, and when students see his passion for the subject, it inspires them to find out what all the excitement is about,” said Harvey Rosen, the John L. Weinberg Professor of Economics and Business Policy.

“George explained concepts from start to finish, ensuring students not only understood that problem, but understood the foundational concepts so thoroughly, that we could apply them to more complex problems on our own,” said one student.

Said another: “I was always so excited to go to precept because I knew he would make the experience fun and enriching. He brought a general joviality to the classroom and brightened the room.”

David Villalobos-Paz is a third-year Ph.D. student in mathematics. He was an AI for “Linear Algebra with Applications.”

“Villalobos-Paz is an example for all of us on how to teach mathematics well,” said János Kollár, the Donner Professor of Science and professor of mathematics. “He clearly was energized by the chance to share his deep love of mathematics and win over a somewhat skeptical audience of students fulfilling a prerequisite or major requirement.”

“David not only presented the information in a manner that made the material understandable, but he also could answer any questions about the content regardless of the scope/difficulty with significant ease and clarity,” said one student.

Said another, “He teaches us how to do the work — not just the vague concepts — and his review sessions have been lifesavers.”