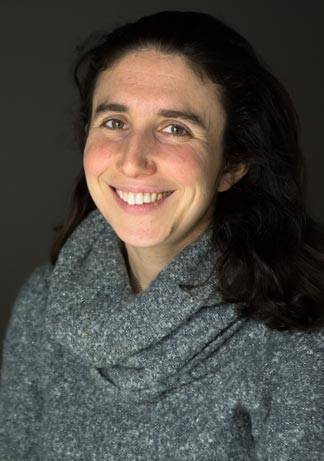 Jenny Greene, an associate professor of astrophysical sciences at Princeton University, studies supermassive black holes, objects so dense that not even light can escape their gravitational pull. Her research indicates that black holes have a bright side: they help to keep the size of galaxies in check by expelling gas that would otherwise go toward forming stars.

It takes two plane flights and a 180-mile car ride to get from Princeton to one of the darkest places in the continental United States, the McDonald Observatory in West Texas. From this isolated spot, Jenny Greene looks out into the universe.

Greene is accustomed to working in remote places — she also visits telescopes in Chile's Atacama Desert and in Hawaii, and she obtains images from an even more distant source, the Hubble Space Telescope. But she always brings back what she learns to share with others. In addition to her research and teaching at Princeton, Greene mentors undergraduates, gives talks at amateur astronomy clubs, and inspires some of the most challenging students — New Jersey state prison inmates — to love algebra.

Greene became interested in astronomy as a freshman at Yale University. "I love that astronomy answers very basic questions about the universe and how we came to be here," she said. "These are questions that everyone is interested in."

The big question occupying Greene these days is the relationship between galaxies and black holes, objects so dense that not even light can escape their gravitational pull. Once thought mysterious and rare, researchers have come to realize that black holes are surprisingly common: most large galaxies, including the Milky Way, play host to a resident supermassive black hole, which is millions to billions of times more massive than our sun.

Greene was drawn to studying black holes at Harvard University, where she conducted her thesis work. She came to Princeton in 2006 as a Carnegie-Princeton Joint Postdoctoral Fellow, which gave her access to the Magellan telescopes built by the Carnegie Institution of Science and located at the Las Campanas Observatory in Chile. After completing her postdoctoral fellowship, she served on the faculty at the University of Texas-Austin before joining the Princeton faculty in 2011. 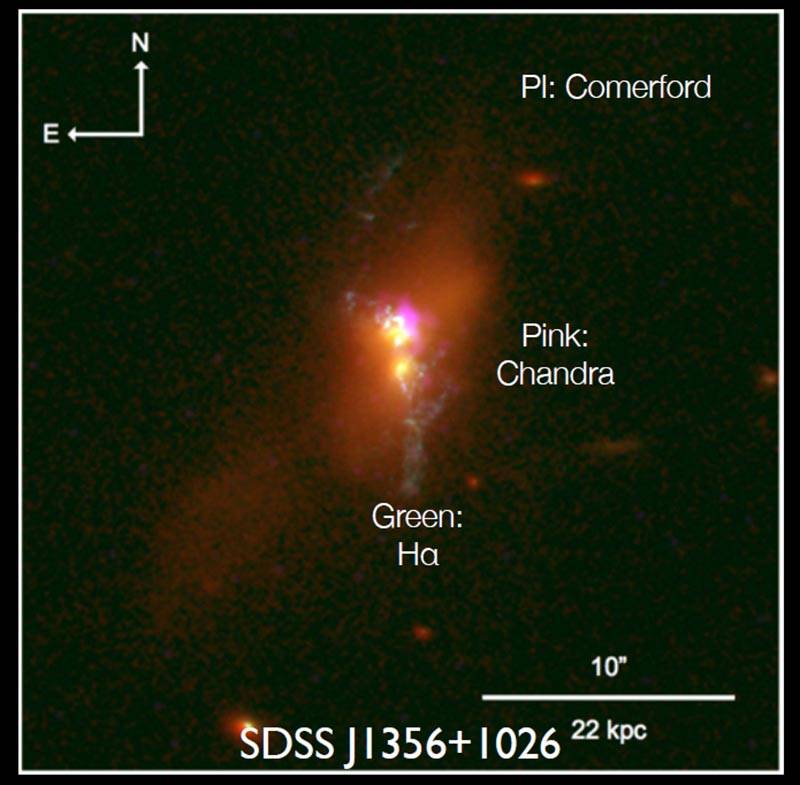 This image shows two galaxies (labeled as SDSS J1356+1026) that harbor a very luminous accreting black hole. The galaxies were imaged by the Hubble Space Telescope (yellow and green) and the Chandra X-ray Observatory (pink). The energy from the black hole is driving a powerful outflow of gas that travels well beyond the edge of the galaxy. The greenish light at the top and bottom of the image represents gas moving at approximately 1,000 kilometers (621 miles) per second. (Image courtesy of Jenny Greene, Department of Astrophysical Sciences)

At Princeton, Greene is gathering evidence to prove that black holes play a beneficial role by keeping galaxies from getting too big. The theory is that black holes restrict galaxy growth by occasionally cleaning house — chucking out extra gas — which if allowed to stay would coalesce into new stars and thus expand the galaxy's size and mass. Although astronomers know that powerful radio jets can carry gas out of galaxies, these jets are relatively rare — found in only one in 10 active galaxies. Greene is looking for something more commonplace, a maintenance method by which all active galaxies may sweep out gas.

Despite its reputation, a black hole usually does not directly swallow stars, gas or other matter. Instead, the matter first falls into a swirling disk surrounding the black hole. The matter trapped in this "accretion disk" gets very hot and radiates light that we can observe. The bigger the black hole, the more luminous it can become.

"Anytime gas gets too close to the black hole there is an episode where the black hole becomes active, accreting gas, getting hot and lighting up, and then pushing that gas out," said Greene. "Then everything is quiet for a while, but should another cloud of gas come near enough to feed the black hole, that gas gets expelled from the galaxy instead of forming new stars."

A recent study by Greene and colleagues showed this process in action. Published in the Astrophysical Journal in June 2014, the study looked a very luminous object called SDSS J1356+1026, which appears to be one or possibly a pair of black holes in two galaxies merging with each other. They found evidence that the energy from the black hole is driving a powerful outflow of gas.

To collect this evidence, the research team, whose other members were Princeton graduate student Ai-Lei Sun, David Pooley at Sam Houston State University, Nadia Zakamska at Johns Hopkins University and Julia Comerford at the University of Colorado-Boulder, gathered images from the Hubble Space Telescope and the Magellan telescopes. They also collected two other types of light, X-ray-frequency light from the space-based Chandra X-ray Observatory and radio-frequency light from the Atacama Large Millimeter/submillimeter Array (ALMA) in Chile.

Each type of light yielded slightly different views of the merging galaxies, and by comparing these views, the researchers could see gas streaming from the galaxies. The ALMA telescope images allowed Greene and colleagues to determine that the ejected gas was driven out by the black hole, rather than expelled during star formation, a process that can also propel gas out of galaxies. The detection of cold molecular gas provided additional evidence that the gas was ejected due to the black hole.

"Jenny is using an incredibly broad range of telescopes to study fundamental questions about how galaxies, and the supermassive black holes that live in their centers, have formed and evolved," said Michael Strauss, professor of astrophysical sciences at Princeton and associate chair of the department. "She is exploring the properties of the smallest galaxies and the largest, and is putting it all together into a comprehensive, multi-faceted picture of how galaxies grow."

Greene hopes to learn even more about how galaxies and black holes coexist from a new instrument that Princeton astrophysical scientists are building for the Japanese-owned Subaru telescope in Hawaii. The instrument, called the Prime Focus Spectrograph (PFS), will come online in 2019 and will split light into its various wavelengths, or spectra, to reveal the amounts of hydrogen, oxygen and other elements in the objects, as well as how fast they are moving and how far away they are.

"We cannot answer other questions — such as what is the mass of a black hole — unless we know how far away it is. For this and many other questions, we need spectra," Greene said. She is leading a team that will study the evolution of galaxies using the PFS, which, given Subaru's size and ability to image large swaths of the night sky, will enable researchers to look at spectra from galaxies at the very early stages just after the Big Bang, all the way to the present. 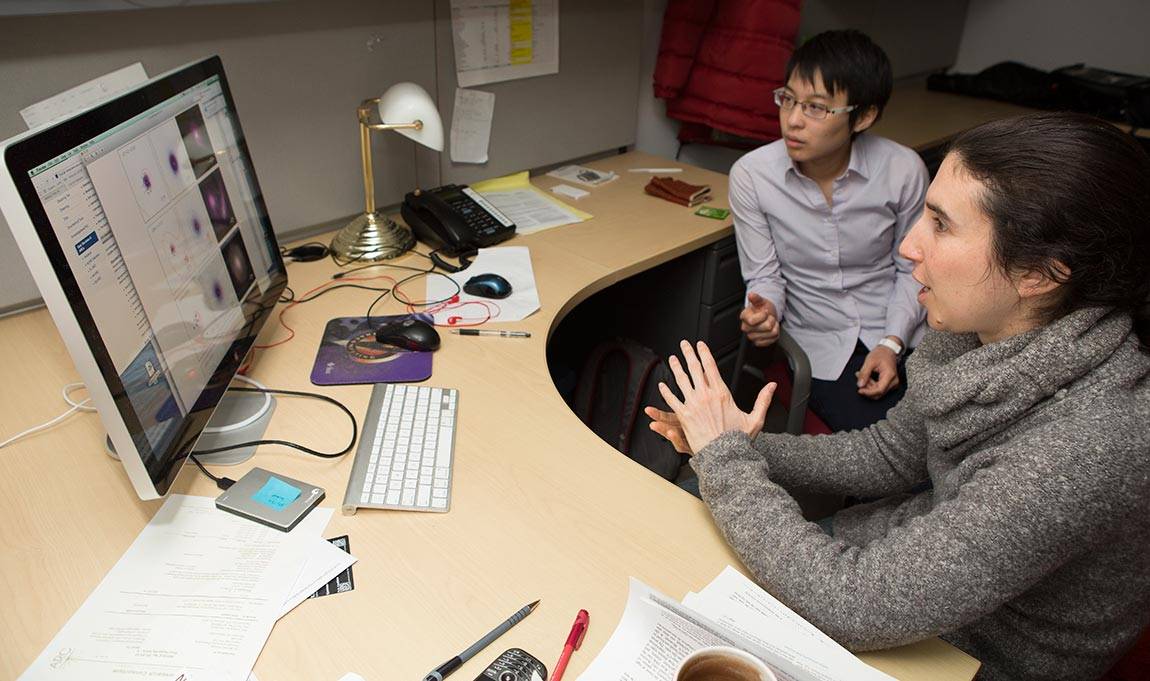 Greene (right) and Ai-Lei Sun (left), a Princeton graduate student in astrophysical sciences, have found evidence that supermassive black holes play a role in regulating the growth of galaxies. (Photo by Denise Applewhite, Office of Communications)

Greene's colleague Gillian Knapp, professor of astrophysical sciences, emeritus, has worked with Greene for the past decade both in astrophysical research and in another endeavor, teaching in New Jersey's state prisons. Knapp and Greene were two of the first Princeton researchers to volunteer to teach in the prisons when the program, now known as the Prison Teaching Initiative (PTI) and run by Princeton's Progam in Teacher Preparation, started in 2006.

"Jenny is incredibly smart, funny, hardworking and a clear thinker," said Knapp. "She goes in a straight line toward the answer. That she puts in a significant amount of time to teach in the prisons says a lot about the kind of person Jenny is."

Recently, the PTI offered its first lab courses, a challenge because most lab equipment is not allowed through the prison gates due to the risk that it could be fashioned into a weapon. Greene helped design a lab for an astronomy class that required the students to measure the mass of the Earth using only dirt, silicone wax and a piece of thread.

Greene said that teaching in the program, through which students can earn an associate's degree that can be applied toward a bachelor's degree upon release, is highly rewarding. "They are the most motivated students you'll ever encounter. They will stop you if they don't understand you and say, 'Tell me again, I really want to understand it.'"

On the Princeton campus, Greene teaches graduate-level courses and an astronomy class for non-majors. She serves as the adviser for the department's 25 graduate students, helping to organize teaching schedules, exams and thesis committees. And she takes on promising undergraduates who, like her, want to answer the biggest questions in the universe.

Rachael Alexandroff, Class of 2012, was one of those students. As an undergraduate, she worked with Greene to collect images of supermassive black holes, a project that included a trip to the Magellan telescopes in Chile. "I always felt as though she treated me as an independent researcher capable of formulating my own hypotheses for how to solve a problem," she said. "For example, I was largely in charge of assembling the sample we observed in Chile based on the targets I thought were most interesting." Today, Alexandroff is a graduate student in astrophysical sciences at Johns Hopkins University.

Visits to telescopes are extremely important for students, but not all researchers take the time to bring students to the telescopes in an age where the data are available online, Knapp said. "Jenny understands the importance of getting out to these instruments, and training students in how to use them. To go to a telescope is like getting to know a person; no description alone will tell you what that telescope is like."

On visits to these telescopes, Greene passes to her students the techniques of modern astronomy —from steering a telescope into position at McDonald Observatory to downloading data from the orbiting Hubble — that reveal the amazing dramas that play out in the universe. It is all part of the job she loves — sharing the excitement in answering the big questions of the universe and how we came to be here.