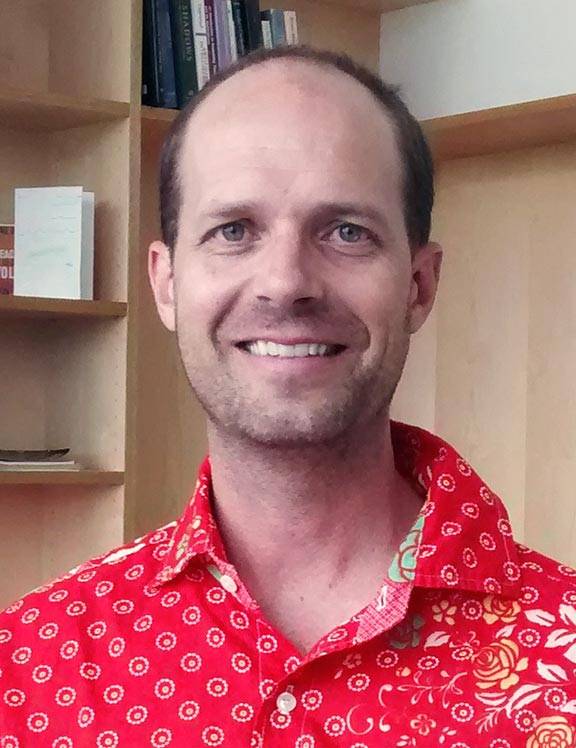 Jonathan Pillow, Princeton University assistant professor of psychology and the Princeton Neuroscience Institute (Photo by Catherine Zandonella, Office of the Dean for Research)

The brain is the ultimate big-data problem. Its billions of neurons give rise to numerous abilities, such as making decisions, interpreting color and even recognizing your best friend. Jonathan Pillow, a Princeton University assistant professor of psychology and the Princeton Neuroscience Institute, aims to understand the brain by using math and statistics to make sense of the reams of information collected by brain-imaging studies. Recently arrived from the University of Texas-Austin, Pillow, who also is affiliated with the University's Center for Statistics and Machine Learning, sat down to talk about how he got into neuroscience, his approach to teaching, and his latest research published earlier this month in the journal Science.

I was a philosophy major as an undergraduate and I was interested in questions such as where does the mind come from. I also studied mathematics and came to realize that neuroscience offered the kinds of tools that I thought would be most useful for understanding how the brain works.

What are the big questions that you are trying to tackle?

My research group is trying to understand how groups of neurons work together to process information. We aim to find out what is happening in the brain that allows you to recognize a face, identify what colors things are, or move your hand to catch a ball that is flying through the air.

How do you go about this research?

We analyze neural activity recorded using functional MRI and other brain-imaging technology, as well as recordings of single neurons, made while a human or animal is engaged in a task.
Given these recordings, our group works on figuring out what patterns of neural activity correlate with the incoming stimulus and the outgoing behavior.

How daunting is this challenge?

Understanding the human brain is one of the greatest challenges of science. The field of neuroscience is really in its infancy when it comes to understanding how behavior arises from neural activity. We understand a lot about how single neurons work, and in some cases how small groups of neurons work together to generate certain behaviors, but we still have a ways to go.

Where does mathematics fit in?

We have a "big data" problem because we can record what a lot of neurons are doing but the challenge is how those activities lead to behavior. It is an exciting time to be doing this because there are rapid expansions of computing power and a lot of exciting work in statistics and the theory of how to work with big data. My research group is developing algorithms that can extract the kind of patterns that we are interested in finding.

How can your research benefit society?

What motivates our research is the desire to understand how the healthy brain works so that we can figure out what goes wrong in brain disorders such as Alzheimer's disease, Parkinson's disease, dementia and schizophrenia. I am working in particular on decision-making, which seems to be compromised in a lot of brain disorders.

A potential application for this kind of fundamental research is sensory or motor prosthetics. If we can learn how your brain is able to recognize a face, or how it can plan a path through a cluttered environment, then we may able to design robots or other artificial systems that can solve those same tasks using the computational strategies that the brain uses.

You moved to Princeton recently from the University of Texas-Austin. What made you decide to come to Princeton?

It is an exciting time in the field of statistical neuroscience for developing tools to analyze data sets. At Princeton, I have the opportunity to collaborate with both theorists and experimentalists. It is an extraordinary group of collaborators and students.

What are you teaching?

I taught a course in the spring semester called "Sensation and Perception," which is sort of a tour of the sensory systems. About half of the course is on vision, so we looked at the earliest stages of processing, asking questions such as: How do neurons in the visual system collect light from the environment and transform that into representations that we can make sense of? What parts of the brain are responsible for carrying out those computations, and, what are the algorithms involved?

It was a really great time to be studying this topic because the dress illusion [Internet meme that asked whether a dress was white and gold, or blue and black, and was widely reported on, including by The New York Times] was in the news the very week that we were studying color perception, so we devoted an extended discussion to what were the mechanisms behind that. It is not often that perceptual sciences are on the front page of the newspaper.

We also cover the auditory system, touch, taste and smell. Each system has a unique set of external sensors that take energy from the environment and convert it into neural signals. My interest is what is involved in processing those signals so that they can drive behavior.

What is the topic of your recent research paper in Science?

We published a paper about the neural activity in a part of the brain that is responsible for decision-making. Neurons communicate with each other by sending little electrical pulses called spikes, and it is generally thought that the rate of these spikes is related to the signal that they are trying to send. Our study looked at changes in the rate of spiking while the brain is making a decision, and our result was quite unexpected.

To find out what is going on in the brain when we make decisions, in an experimental task, an animal looks at a screen containing dots moving to the left or to the right and tries to decide which direction the majority of dots are moving. The longer the animal looks, the more information it gets, until the animal accumulates enough information and makes a decision.

The standard theory is that neurons add up this evidence via the slow ramping up of spike rates over time as more evidence comes in. However, we used a statistical analysis of these spike patterns to show that that is not what is going on in these neurons. In fact, the majority of the neurons experience discrete jumps in the spike rate rather than a ramping up. This is consistent with a binary model where, before the decision, most neurons have one rate of spiking, and after the decision is made, most of them jump to a higher spike rate. So it is a fundamental new insight about the dynamics of these jumps and how they are related to how the brain makes decisions.

How did you come to this result?

This started as a course project for the lead author, Kenneth Latimer, who earned his Ph.D. this summer in my group at my former institution, the University of Texas-Austin. With assistance from Jacob Yates, Miriam Meister and Alexander Huk, Latimer implemented a statistical comparison of the two models. He compared the stepping model to a ramping model, and we thought the results would confirm the ramping model.

Instead, he found that the evidence pointed to the stepping model. This was quite a surprise, so we conducted follow-up experiments, and everything we tried confirmed these results. So it started as an exercise for implementing a technique for analyzing data where we thought we knew what the answers were, and it revealed something new and surprising.