Focusing on themes of acceptance, empowerment and empathy, Emmy-nominated actress Laverne Cox shared her personal story and advocated for the transgender community during the talk "Ain't I a Woman: My Journey to Womanhood," on Tuesday, Nov. 17, in Princeton University's Richardson Auditorium.

Cox, the first transgender woman of color to have a leading role on a mainstream scripted television show, plays Sophia Burset on the Netflix series "Orange Is the New Black." 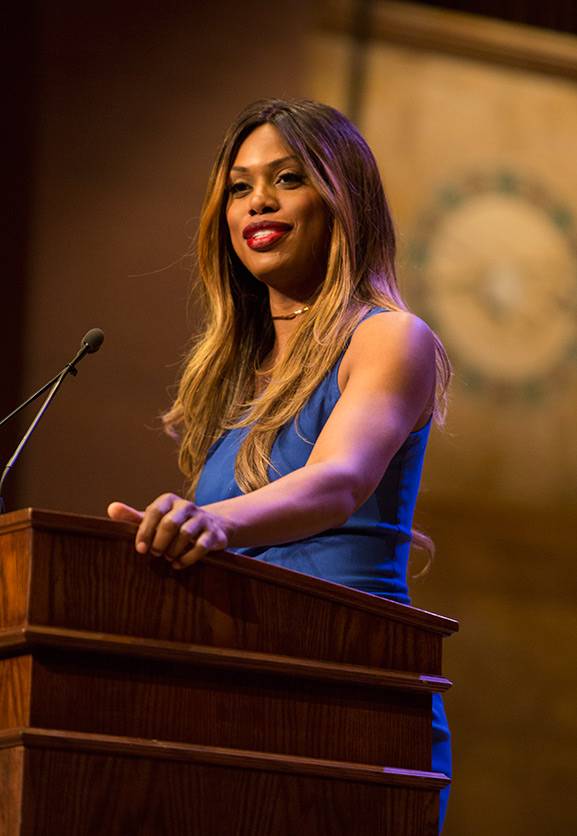 Laverne Cox, an Emmy-nominated actress and advocate for the transgender community, gives the talk "Ain't I a Woman: My Journey to Womanhood" on Tuesday, Nov. 17, at Princeton University. Cox said her message is about all people embracing what makes them unique and beautiful. (Photos by Denise Applewhite, Office of Communications)

"I'm truly honored to be here at the amazing and prestigious Princeton University," said Cox as the auditorium of students, faculty, staff and community members welcomed her with cheers.

"I stand before you this evening as a proud African American transgender woman from a working-class background, raised by a single mother," Cox said. "I stand before you as an artist, an actress, a sister and a daughter. I believe it's important to name the various intersecting components of my multiple identities because I am not just one thing and neither are you."

In a lecture that often evoked the style of spoken-word poetry, Cox told the audience of her journey being bullied as a child in Mobile, Alabama, to embracing her transgender identity as a college student in New York, and to her role today as an actress and voice for transgender awareness and equality.

Cox's speech was followed by a conversation with Dean of the College Jill Dolan, who previously directed Princeton's Program in Gender and Sexuality Studies.

"Your story is truly pioneering for someone who, in my own life, grew up looking for lesbian, gay and transgender people in television, film and theater," said Dolan, the Annan Professor in English and professor of English and theater in the Lewis Center for the Arts. "It gives me great pleasure and pride to know that you are in the world and we get to listen to you." 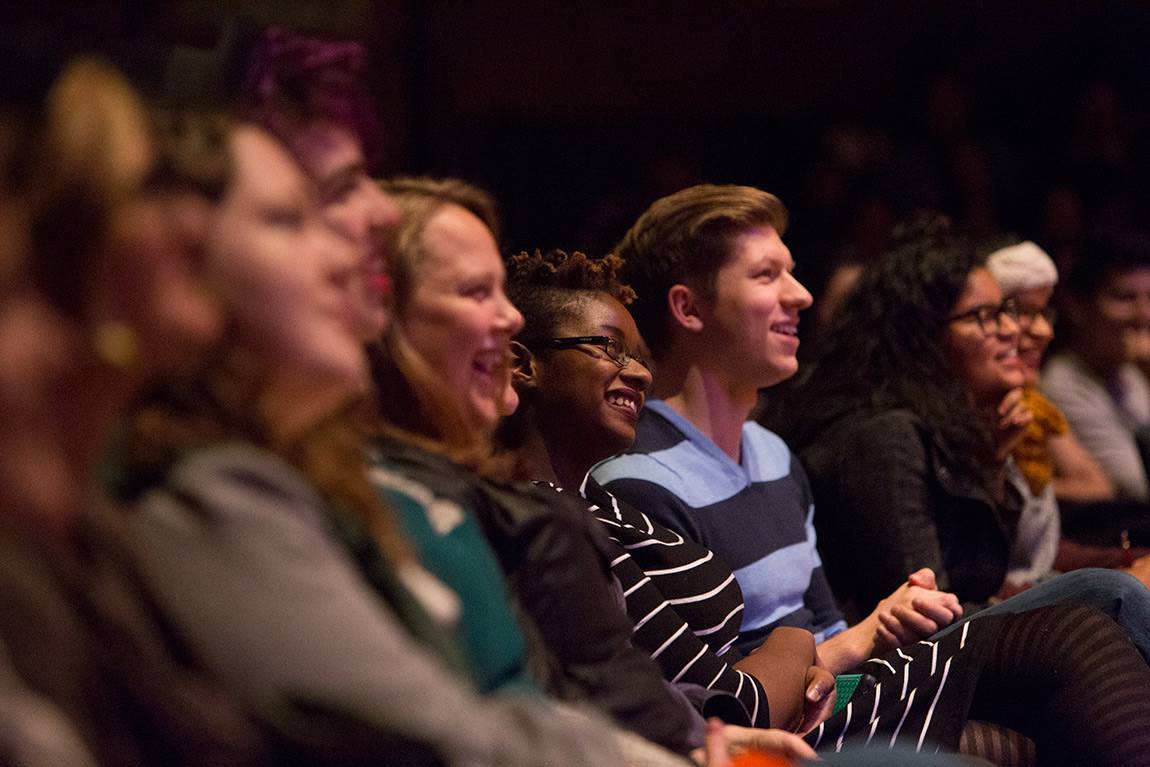 Students, faculty, staff and community members in Richardson Auditorium listen to Cox speak about her personal journey to embracing her transgender identity and her work today as a champion for transgender awareness and equality.

From an early age Cox said she was beaten up by other children and reprimanded by adults because "they said I acted like a girl — whatever that means because we know girls act all sorts of ways."

The turning point in her life, Cox said, was attending Marymount Manhattan College. She came to "critical consciousness" after reading works by seminal feminist authors and gender theorists, and for the first time she found transgender role models.

Based on her experiences, Cox said she is passionate about spreading the idea that "trans is beautiful." She cited as particular concerns combatting the high risk of suicide among transgender people, as well as violence against transgender women and transgender women of color. 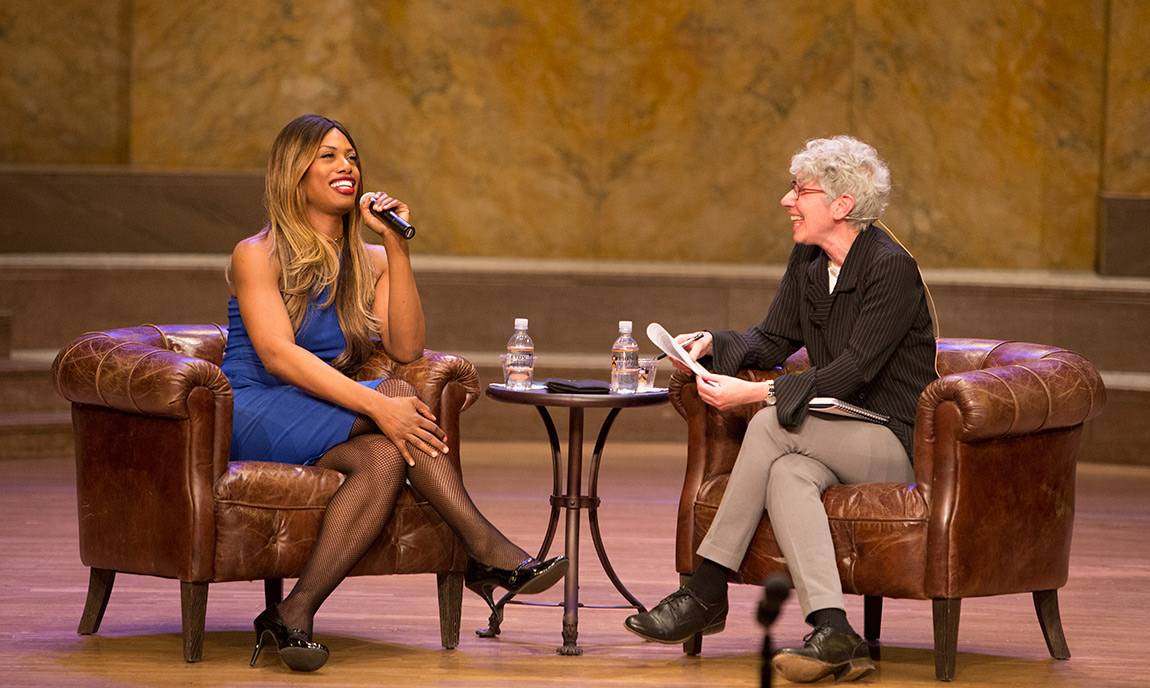 Cox talks with Princeton's Dean of the College Jill Dolan about her role as Sophia Burset in the Netflix series "Orange Is the New Black." Dolan said Cox's work as a transgender actress on a popular television show is pioneering.

"Trans is beautiful is not just about transgender people. It's about all of us," Cox said. "Very few of us fit neatly into the expectations of who we should be based on gender expectations. Celebrate all those things that make you uniquely and beautifully you."

During a question-and-answer session, students queried Cox on a range of subjects, from how students can be allies for marginalized groups to whether Cox's work as a social activist influence the roles she chooses as an actress.

"I kindly invite you to let your feelings guide your learning," Cofino said to the audience as the event started. "Feel your way to deeper understanding tonight about yourself, about the world, about people like you and people not like you. This too is part of your learning at Princeton."

Cox's talk was presented by the University's Carl A. Fields Center for Equality and Cultural Understanding, LGBT Center and Women*s Center, with support from the Conversations on Identity Public Programming Series, Office of the Dean of the Undergraduate Students, Lewis Center for the Arts, and the Woodrow Wilson School of Public and International Affairs.