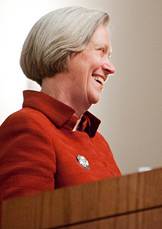 Play the "Every Voice'" video.

Play the "Every Voice'" video.

Princeton University's first conference for lesbian, gay, bisexual, transgender (LGBT) and ally alumni on April 11-13 gave a voice to hundreds of alumni, many who felt as if they did not have one as students on campus. The "Every Voice" conference brought together 550 undergraduate and graduate alumni, faculty, staff and students to celebrate how Princeton and the country have transformed during the past 50 years and to discuss the advances the LGBT community still seeks.

"In my life, in all of our lives, there are very few cultural changes that have happened as quickly as this one. I am so happy that it happened at Princeton," President Shirley M. Tilghman said during a conversation with alumni, referring to support for LGBT people and rights. 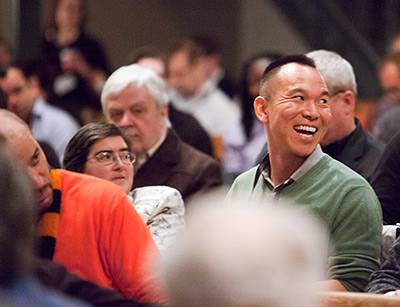 Stanley Shimamoto, a member of the Class of 1997, listens to alumni remarks during a discussion at the "Every Voice" conference. (Photo by Denise Applewhite)

Throughout the conference, alumni spoke of an evolution on campus — from the 1950s through 1970s, when LGBT issues were largely unacknowledged or underground; to the 1980s and 1990s, when speakers said many students felt uncomfortable being openly gay or encountered prejudice if they were; through the 2000s and today, when LGBT students, staff and faculty are a visible and vibrant part of the Princeton community.

"For me, this event fills a void and closes the circle and makes Princeton whole for us," said Abby Rubenfeld of the Class of 1975. "It makes us feel like part of the family."

Byron Austin, a member of the Class of 2007, said he appreciated the opportunity to talk with LGBT alumni from previous classes.

"Hearing about some of the difficult experiences they had really makes me grateful for the trailblazers who helped establish a culture on campus that was open and accepting by the time I was a student here," he said.

Organized by the Alumni Association and planned by a steering committee co-chaired by Karen Magee, of the Class of 1983, and Robert Gleason, of the Class of 1987, "Every Voice" featured faculty lectures on topics such as Shakespeare, identities, and gender and sexuality studies; panels on marriage equality and the LGBT student experience; remarks by alumni such as David Huebner, the U.S. Ambassador to New Zealand and Samoa and a 1982 alumnus, and U.S. Rep. Jared Polis of Colorado, a 1996 alumnus; and discussions on a range of other issues from public service to parenting.

A 'champion of LGBT students'

Many speakers credited Tilghman with Princeton's advancements on LGBT issues, including supporting the opening of the LGBT Center in 2006.

Tilghman said she became a "champion of LGBT students" after her 2003 Commencement speech on courage. The speech noted, among many examples, the courage it takes to come out of the closet. Afterward, Tilghman said she was flooded with positive responses from alumni, students, faculty and staff.

"I realized the power of my voice and then I realized I had to use that voice. There was a community out there that needed my voice," she said.

During his opening remarks, Executive Vice President Mark Burstein recalled his conversation with Tilghman nine years ago before he decided to work at the University. Burstein told her it was important to him that Princeton was comfortable with the fact he was gay and had a spouse.

"So she pauses and then she said, 'I had no idea, but now I want you even more.' And it was at that moment I decided to take the job," Burstein said. "Her unscripted enthusiasm and support were so present."

Noting Tilghman's retirement as president at the end of this academic year, some attendees wondered about the future for the Princeton LGBT community.

"I think the change is embedded in the DNA of the institution," Tilghman said in response to alumni questions. "A commitment to this kind of progress does not depend on a single individual at all."

She said recent efforts were built on the work of her predecessors to foster a more diverse campus community, and the Board of Trustees is concluding an 18-month study to identify ways to further enhance diversity of all kinds on campus. 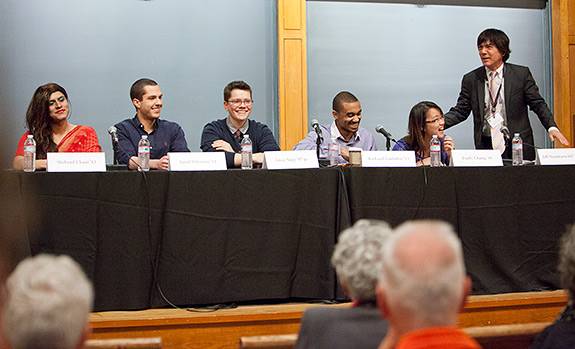 Professor of English and master of Rockefeller College Jeff Nunokawa (far right) moderates a panel on the student experience at Princeton today. (Photo by Denise Applewhite)

Being LGBT at Princeton today

The creation of the LGBT Center and the steadfast work of its director, Debbie Bazarsky, also were noted as significant milestones in LGBT history at Princeton.

"This conference is truly a dream realized for me," Bazarsky said during a staff panel about working at Princeton.

Bazarsky joined the University in 2001 as the first full-time, year-round administrator serving the needs of LGBT students.

"There were only a handful of LGBT students on campus. I could count them on my fingers," she said.

Now, Bazarsky noted, there are many LGBT students and allies on campus and various organizations supporting LGBT issues. 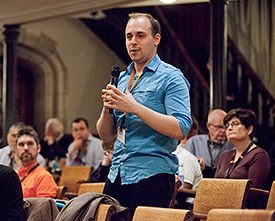 Senior Bruce Easop asks a question of panelists during the "Every Voice" conference. (Photo by Denise Applewhite)

During a panel on the Princeton student experience today, senior Richard Gadsden said he wrestled with coming out to his freshman roommates following a bad experience in high school. When he finally did, Gadsden said nothing changed among his friends, and he became more involved with LGBT activities on campus.

"I've been able to really discover myself and be comfortable with myself here so much more than I ever thought I could," he said.

Luca Nagy, who earned a Princeton undergraduate degree in 2007 and is currently a graduate student, said she has tried to change minds about LGBT issues among friends in her native Hungary.

"The great thing about Princeton … is a lot of people go out and become leaders. As we change Princeton, we do have this far reach outside of Princeton as well," she said.

The student testimonials were just one of the many examples of Princeton's progress. At another conference event, 1995 alumna Amy Escott said the campus climate seems more open since her last visit 15 years ago.

"This was the first event that made me want to come back to connect with other people and see how much has changed," she said. "Even something like the rainbow flags set up in front of Nassau Hall — I could have never imagined that when I was a student here." 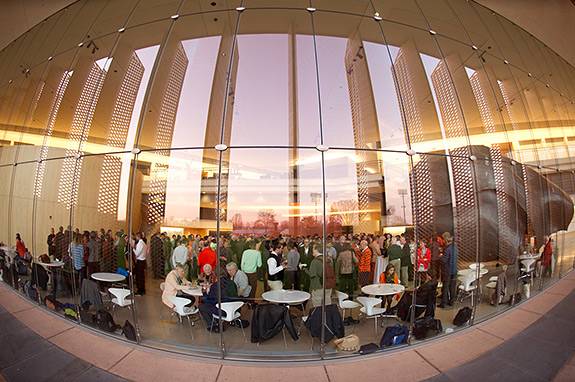 Alumni, faculty, staff and students gathered in Icahn Laboratory for a closing reception on April 13. (Photo by Sameer Khan)

In addition to reflecting on Princeton experiences, the conference featured a number of events that examined broader LGBT-related issues.

"What are social identities? You might think that was a strange question to ask, but until the 1950s it's fair to say that nobody had this notion," said Kwame Anthony Appiah, Princeton's Laurance S. Rockefeller University Professor of Philosophy and the University Center for Human Values in his lecture on identity. "It's not about as people who you are, but how to talk about and how to think about these [identities]."

In the panel "Marriage Equality and Beyond," legal experts discussed the two same-sex marriage cases before the U.S. Supreme Court.

Anthony Romero, a member of the Class of 1987 and executive director of the American Civil Liberties Union (ACLU), relayed the ACLU's experience challenging the federal Defense of Marriage Act on behalf of Edie Windsor in Windsor v. United States.

"When we win this case, it's going to be phenomenal," Romero predicted, noting the various federal benefits that could be extended to gay spouses whose states recognize same-sex marriage.

Colored flags were set up in front of Nassau Hall during the "Every Voice" conference on campus April 11-13. More than 540 undergraduate and graduate alumni, faculty, staff and students attended. (Photo by Denise Applewhite)

During a question-and-answer session, Charlie Katzenbach, of the Class of 1971, spoke of being transgender and her longtime wife's illness. Katzenbach said she worries that legally becoming a woman would risk her rights to care for her wife since her state does not recognize same-sex marriage.

"How do we take these successes [for equal rights] of the lesbian and gay community and translate them to transgender community? That is where we still have a lot of work to do," Romero said.

In a talk co-sponsored by the Woodrow Wilson School of Public and International Affairs, Dr. Michael Gottlieb shared his experience on the frontlines fighting AIDS, which he and colleagues identified in 1981 as a new disease. He said the development of treatments for HIV and AIDS during the past 30 years has been "spectacular" thanks to medical research and advocacy efforts to draw attention to the epidemic.

(From left to right) Margaret Sonser Breen, a member of the Class of 1984 and professor of English, women's, gender, and sexuality studies at the University of Connecticut, moderates a conversation between writers Jodi Picoult, a 1987 alumna, and Jennifer Weiner, a 1991 alumna. (Photo by Denise Applewhite)

During a luncheon, Margaret Sonser Breen, a 1984 alumna, interviewed writers Jodi Picoult, a 1987 alumna, and Jennifer Weiner, a 1991 alumna. The authors discussed how popular fiction could challenge opinions on social issues.

"I have tried to pick up topics that will entertain a reader, but that ultimately will leave a reader thinking after that last page is turned," said Picoult, whose 2011 book "Sing You Home" explores what it means to be gay in today's world.

Weiner talked about writing the mother character, a lesbian, in her 2001 book "Good In Bed."

"The mom is not the central character of the book, but I wanted to make her fully human. Not a punch line, not a caricature, not a collection of stereotypes, but a person," she said.

During the conference, organizers also premiered a video that chronicles the experience of LGBT students at Princeton during the past five decades through interviews with alumni, faculty, staff and students.

Reflecting on the three-day event, Alumni Association President Henry Von Kohorn, of the Class of 1966, said he hoped it was an opportunity for some alumni to reconnect with each other and with Princeton.

"What we wanted from this was for people to feel when they came back that they were wanted and they were valued," he said. "The theme of the conference is every voice and what we are hoping for is that people realize that we are all Princetonians, we are all the same, we are all part of the family."

Highlights from the "Every Voice" conference are available on the Alumni Association website.

Robertson Hall was illuminated by rainbow lights in honor of the "Every Voice" conference April 11-13. (Photo by Sameer Khan)