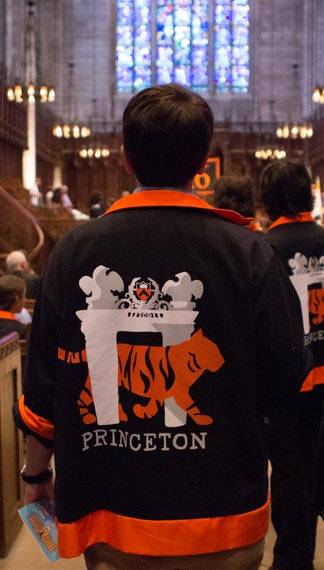 Photos by Denise Applewhite and Danielle Alio, Office of Communications

At Princeton's Class Day ceremony Monday, May 30, best-selling novelist and 1987 alumna Jodi Picoult encouraged seniors to raise "questions most people would rather not hear, much less discuss."

Picoult has published 26 novels, many of which, she said, "ask questions that made me, or others, uncomfortable." Such questions span whether we love our children equally in "My Sister's Keeper," to how to make the world safe for a son who comes out as gay in "Sing You Home," to the dubious advantages of white privilege in her forthcoming novel, "Small Great Things." 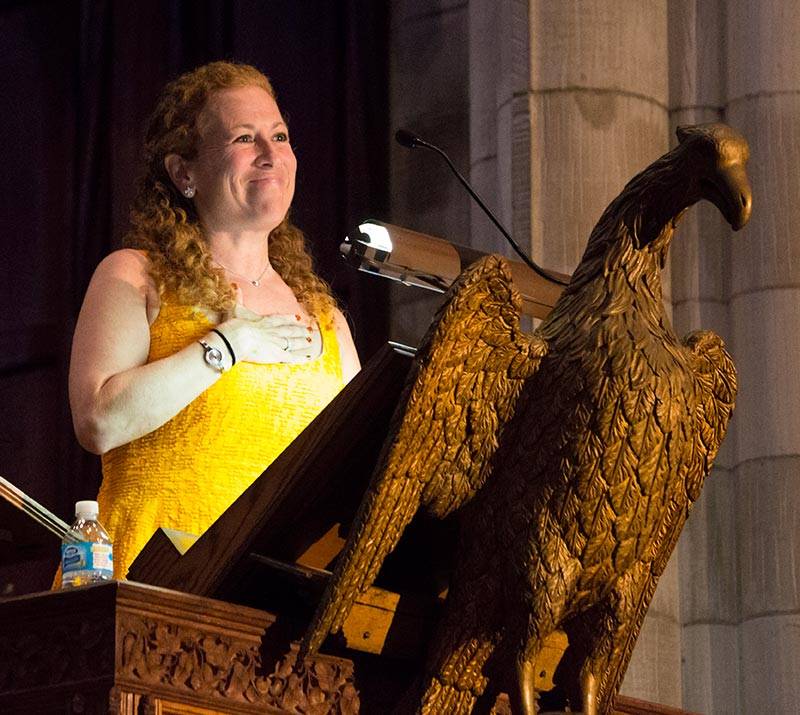 Humorously and movingly, keynote speaker Jodi Picoult, a bestselling novelist and 1987 alumna, spoke about her time at Princeton and her life afterward as an "accidental activist" fighting for gender and racial equity.

"At Princeton, I became someone I never expected to be: an accidental activist," said Picoult, who majored in English and studied creative writing. She recounted how her first short story, written in a creative writing workshop, was torn to pieces by the instructor, author Mary Morris. When she visited Morris during office hours and asked why, Morris said, "Because you needed it, and because you can take it." Picoult went back and edited — and re-edited — that story, then sold it to Seventeen magazine while still an undergraduate.

"This is what I mean by being an 'accidental activist,'" she said. "Sometimes, you don't know what you're capable of until you're told 'no.'"

Picoult recalled her time at Princeton as a series of breaking barriers — saying she was the first woman to set foot in a men's crew shell, where she met her husband, Tim van Leer, a member of the Class of 1986. "I like to say Tim and I started our relationship with me yelling at him and 26 years later, not much has changed," she said to hearty laughter. 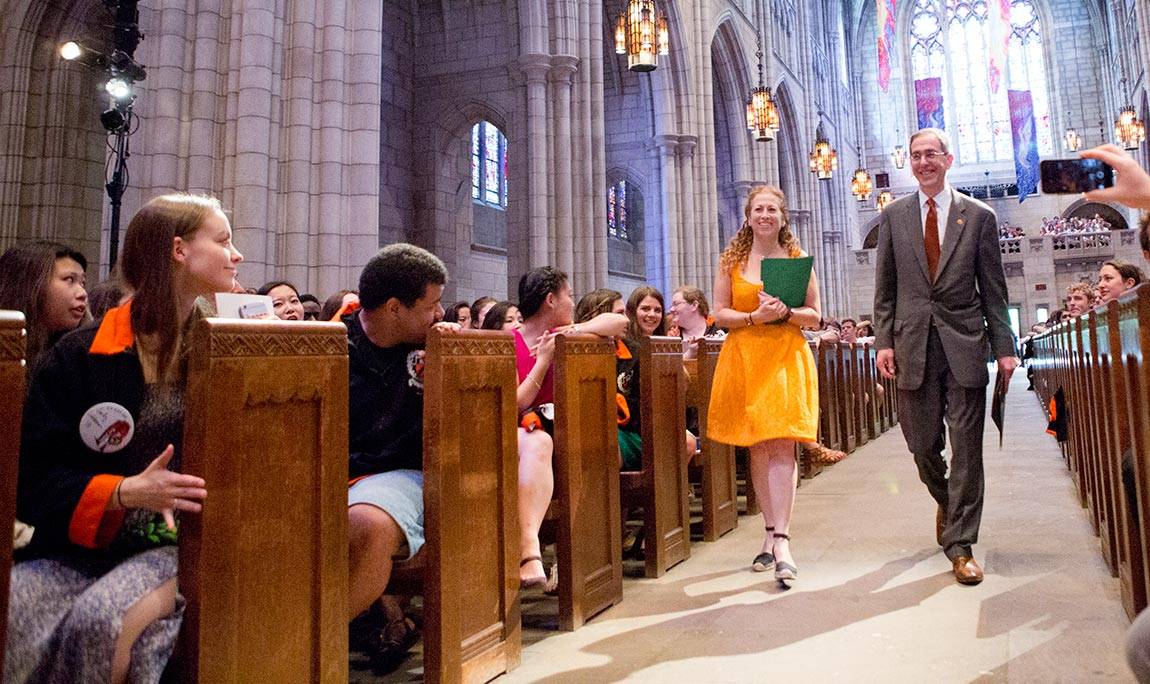 Picoult and President Christopher L. Eisgruber lead the informal processional at the beginning of the celebration.

Picoult's speech was the keynote of Class Day, an annual, traditionally lighthearted ceremony seniors organize to recognize the achievements of their class. The event was held in the University Chapel rather than on Cannon Green due to a threat of thunderstorms. Spirits were high as students — bedecked in their new black and orange class jackets — filled the pews and snapped selfies with their friends.

After graduating from Princeton and earning a master's degree in education from Harvard University, Picoult said she continued to push back. When critics in the publishing industry called her books "women's fiction," a euphemism for "chick lit," she dug in her heels. "I said the label didn't refer to my audience but to the fact that I have lady parts." Half her fan mail, she noted, comes from men. Picoult's books have been translated into 34 languages and have garnered numerous awards. "My Sister's Keeper" was made into a feature film and four other novels have been made into television movies.

When she and novelist Jennifer Weiner, a 1991 Princeton alumna, "dared to suggest that there was gender inequity in publishing," citing a study that shows male writers are reviewed more frequently than women, "we were told to stop whining … I'm still a thorn in the side of the publishing industry, because I won't stop talking about gender and racial equity," she said.

Picoult brought her point closer to home, noting the recent campus discussions surrounding Woodrow Wilson's legacy. "Comfort is not an inalienable right," she said to thunderous applause. "There are people on this campus who feel uncomfortable every day, who have to search harder to find the narrative of their story at Princeton."

Picoult challenged students to take the time to understand others' points of view.

"[T]he knowledge of what is right already burns inside you like a pilot light. Lots of things will threaten to douse it — money, fame success, privilege … You always have the choice to work for the greater good, to nurture the spark of what makes us accountable to each other. In fact, your only job, as an official grownup, is to not lose sight of that flame," she said.

From left, seniors Martina Fouquet, Justin Ziegler and Anna Aronson speak about cherished moments at Princeton and their deep connection to their academic home for the last four years.

Princeton President Christopher L. Eisgruber spoke to the students before Picoult, addressing the "Great Class of 2016" as the largest ever to graduate from Princeton, the most diverse, and the most global with students from 57 countries. He noted that their time at the University was filled with a number of transitions.

Those included a change in president — referring to his predecessor Shirley M. Tilghman, who greeted the Class of 2016 at Opening Exercises their freshman year — to the naming of a new dean of the college, Jill Dolan.

He spoke of two landmarks "of weight and gravitas that have defined this campus for generations" that experienced transitions in the last four years: the Dinky train station and the WaWa convenience store, which were rebuilt on new sites as part of constructing the new Lewis Center for the Arts.

Adopting a mock professorial tone, Eisgruber illustrated the moves of these beloved destinations with a slide show that included a hand-tinted postcard showing the Dinky's original 19th century location by Blair Arch and a photo of Deathstar 13 from "Star Wars" since the newly constructed WaWa "apparently reminds some people of an alien spaceship," he said.

Calling out the new WaWa fare — kale and quinoa salad — "that's kale with a K, not Yale with a Y," he informed the class that they would heretofore "be known throughout the world as the "Guardians of the Wa." 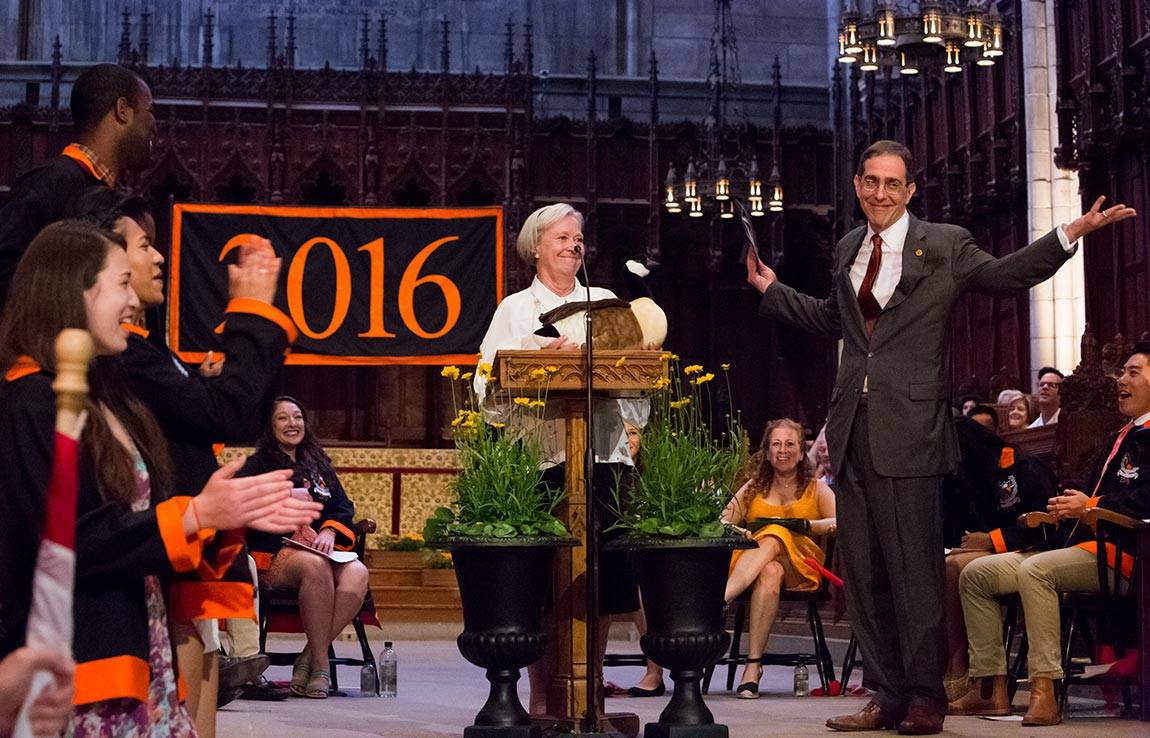 Eisgruber shrugs after his predecessor, Shirley M. Tilghman, tells him that "Canada goose" is the proper name for the waterfowl he had earlier called a "Canadian goose."

As Eisgruber bestowed the traditional key to Nassau Hall to the class officers, he said he would also present them with an authentic representation of a Canadian goose, a nod to WaWa's mascot and Tilghman's native Canada. Then all heads turned as Tilghman marched down the center aisle — Canadian senior Kyle Rankin carrying the maple leaf flag on one side of her and the Mathey College moose mascot marching on the other — bearing a big smile on her face and a large stuffed plush goose with four little stuffed geese on top.

Reaching the stage, Tilghman, who served as president from 2001 to 2013, chided Eisgruber: "You referred to this iconic animal as a 'Canadian goose' — this is a 'Canada Goose,'" to which Eisgruber turned to the audience and quipped "Wow. See? That's the great thing about a Princeton education: you keep learning important stuff long after you graduate!"

Student speakers Martina Fouquet and Anna Aronson recalled the Class of 2016's time at Princeton with reflection and playfulness.

Fouquet, of Coconut Creek, Florida, a politics major who also earned a certificate in creative writing, emphasized that Princeton, which may look perfect at first glance, is not perfect — "and that in and of itself is a part of its beauty," she said.

Naming milestones that shaped the University's diversity — from students arguing for desegregation in 1942 in a series of op-eds; the appointment of Carl Fields as the first African American dean of an Ivy League institution in 1968; and Princeton's acceptance of female students in 1969, Fouquet observed that Princeton today is "full of humans from many different places."

"We are all a series of imperfections. And we have brought those imperfections to this campus, burying a seed for the flowers that, while seemingly misplaced, add to the character that gives this campus life," Fouquet said. 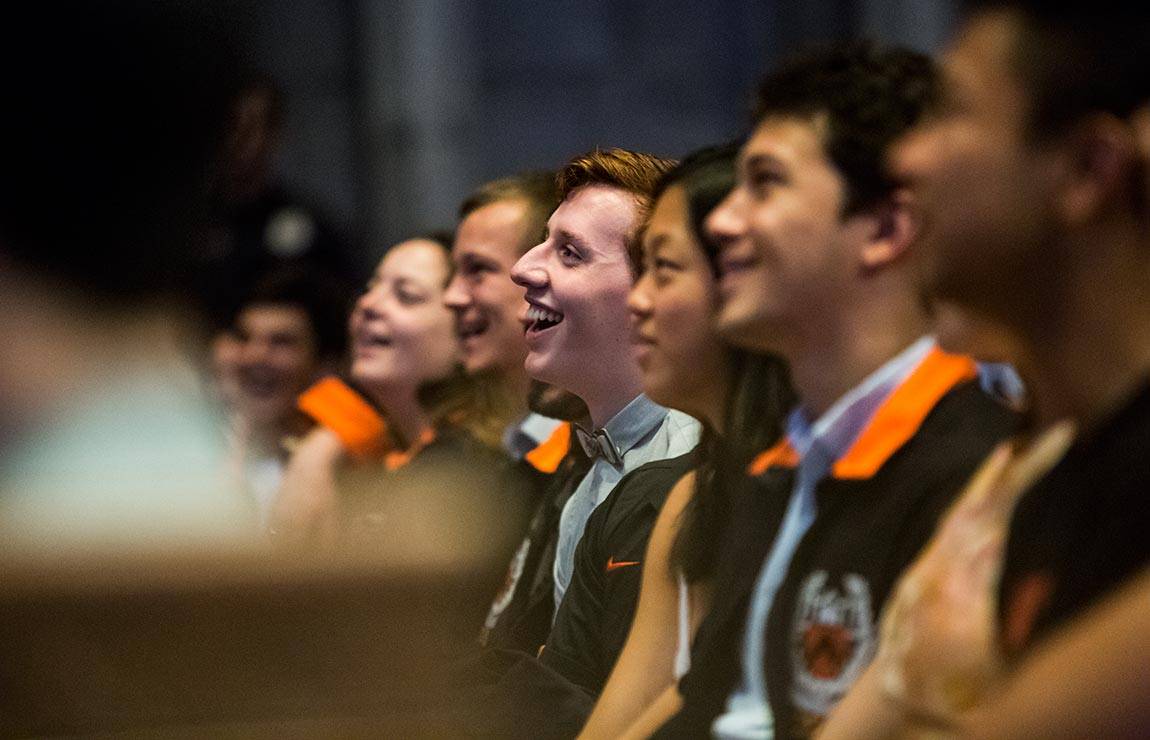 Students react with smiles and laughter as the Class Day speakers salute the Great Class of 2016.

Aronson, a sociology major who is also earning a certificate in theater, picked up on Eisgruber's theme of transitions, announcing she had recently opened a Tinder account for online dating — "one of those transitional acts that helps you envision your life beyond the gates."

Aronson, of Brooklyn, New York, compared the Class of 2016's time at Princeton to a four-year date, peppering her remarks with references to the bumps, challenges and humor that go along with dating. In closing she said: "Though we may feel butterflies about what lies ahead, our time with this handsome University has given us the courage to right swipe on new passions and pursuits in the future — a Ph.D., a family, a celebrity crush" as she glanced straight at Eisgruber, amid laughter and loud applause from the audience.

Justin Ziegler, of Leonia, New Jersey, thanked his peers for letting him serve as their class president for three years. "We are graduating from the number one college in the world," said Ziegler, who is a major in the Woodrow Wilson School of Public and International Affairs and is earning a certificate in African studies. "We will change the world." 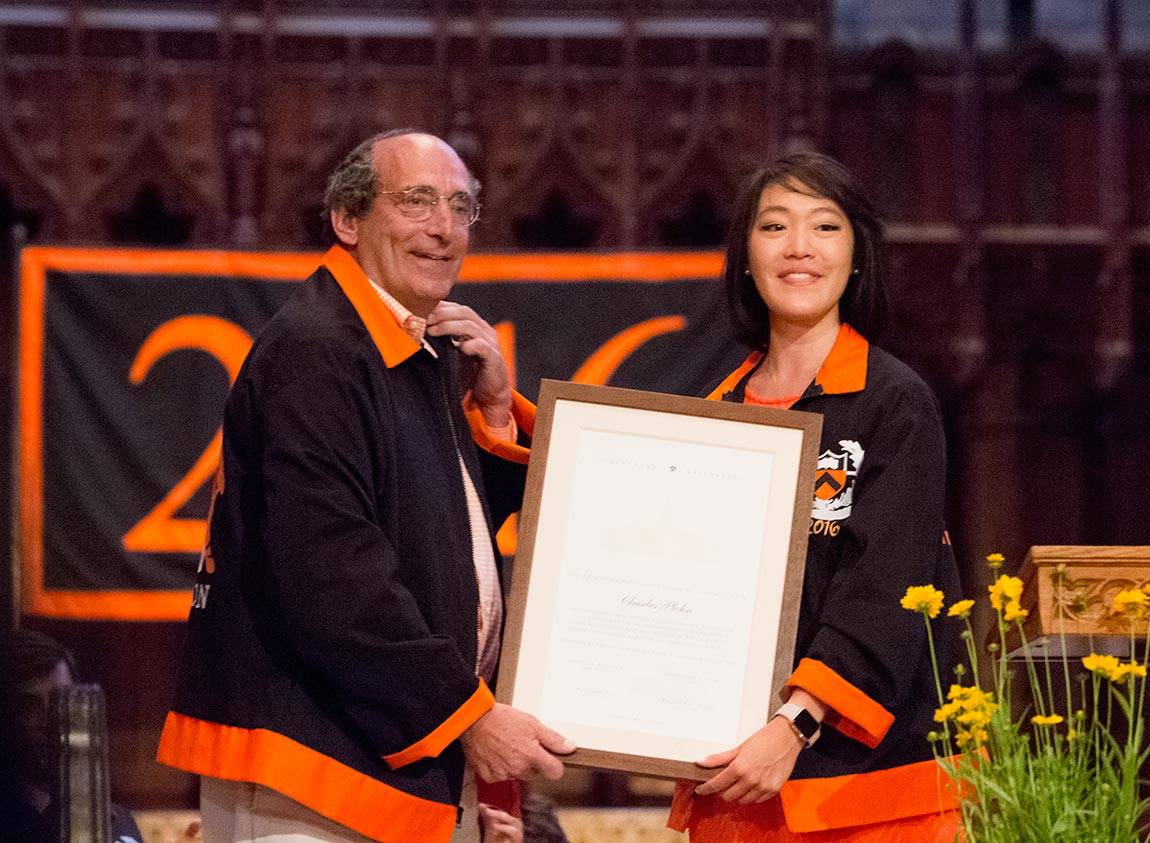 Saying that part of her job as a graduation speaker was to give advice, Picoult echoed an African proverb — "If you want to go fast, go alone. If you want to go far, go together." She encouraged seniors to enjoy their new diplomas at Commencement, but then get on with the real work ahead.

"Look down and pull up those who are still climbing, so that they can enjoy the same view. Look up and see where else you can climb," she said.

A webcast of the Class Day ceremony will be available later online. Graduation activities will continue with the University's 269th Commencement scheduled for 11 a.m. Tuesday, May 31. 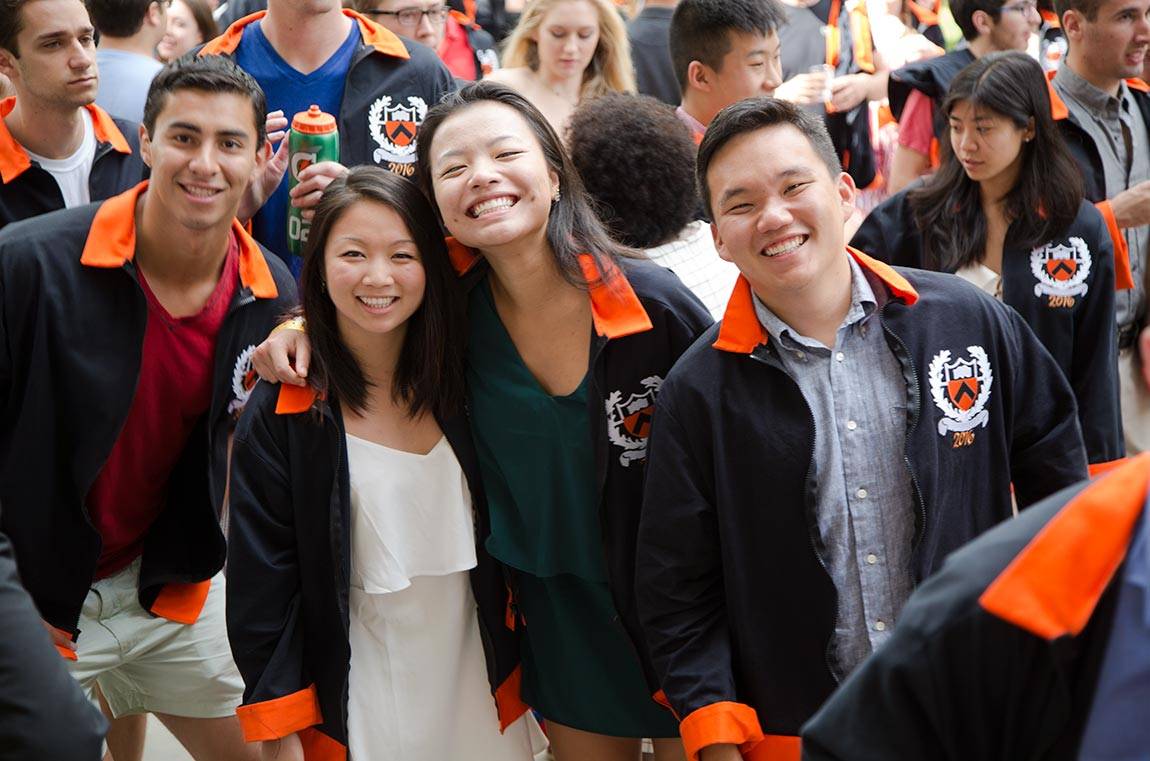 Full of smiles and good cheer, students gather outside with friends as they wait to enter the chapel. 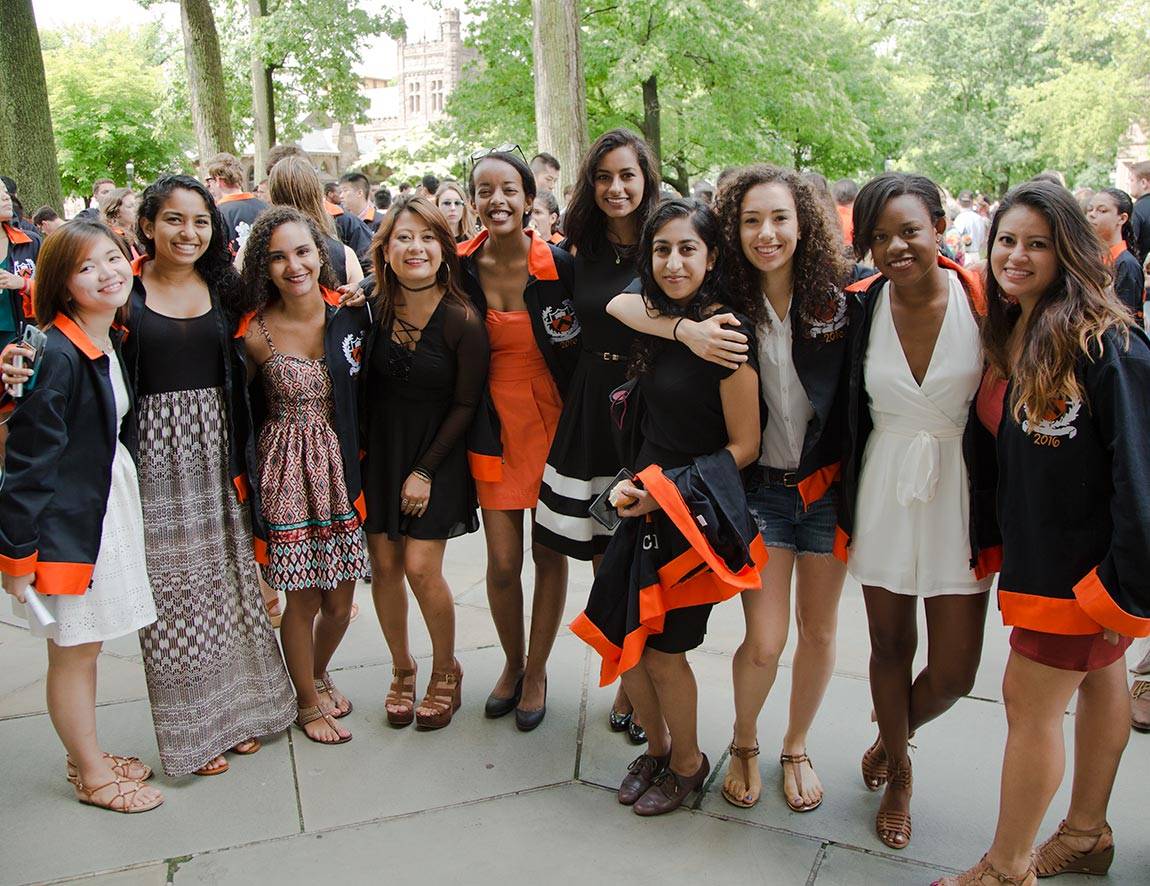 Members of the Class of 2016 enjoy a moment of camaraderie on Class Day. The annual event, held the day before Commencement, is organized by seniors to recognize the achievements of their class.