Executive Vice President Mark Burstein was one of several speakers who celebrated the opening of the LGBT Center in the Frist Campus Center. He lauded the establishment of the center as a milestone in Princeton's efforts to foster a diverse, inclusive campus. 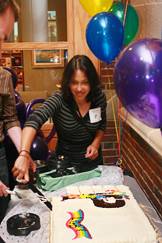 Below left: Three LGBT students discussed their experiences at Princeton and what the LGBT Center means to them. From left, senior Caitlin Edwards spoke as senior Paul Pawlowski and graduate student Larry Lyons listened, along with LGBT Center director Debbie Bazarsky.

The "grand opening" of Princeton's Lesbian, Gay, Bisexual, Transgender (LGBT) Center on Oct. 12 marked a significant step in the University's efforts to foster a welcoming, supportive climate for all campus community members.

Some 150 students, faculty, staff and alumni joined in celebrating the LGBT Center, which was established in summer 2005 and earlier this year moved into its new home at 246 Frist Campus Center. The grand opening ceremony, which was followed by a '70s-themed dance, was one of several events organized for LGBT Awareness Week.

"It is a very exciting day for the University to be able to fulfill the dreams of so many people," said Princeton President Shirley M. Tilghman, referring to the numerous campus community members who contributed to the establishment of the LGBT Center.

"This is really a milestone for us," Tilghman said.

The center serves as a hub for the many initiatives and services that have been developed for Princeton's LGBT students, including numerous student organizations; health, counseling and peer education services; LGBT course offerings; and social and educational programming. In recognition of these efforts, Princeton this summer was named one of the top 20 institutions for LGBT students in a nationwide ranking of colleges and universities by Advocate Magazine, the national newsmagazine for LGBT issues.

The establishment of the LGBT Center occurred more than a decade after Princeton became one of the nation's first universities to create an LGBT coordinator position to oversee student activities and support services. Debbie Bazarsky, the LGBT Center's director, recalled that when she was hired as the first full-time LGBT student services coordinator in 2001 there were no plans to establish a formal center at Princeton.

The center's creation was spearheaded by Bazarsky and the LGBT Task Force, a group of students, staff and faculty who felt the University needed to establish a center for LGBT students comparable to the Women's Center, International Center and Fields Center for Equality and Cultural Understanding. Three years ago, the University approved the task force's request for the center and for more support and resources to the LGBT community. 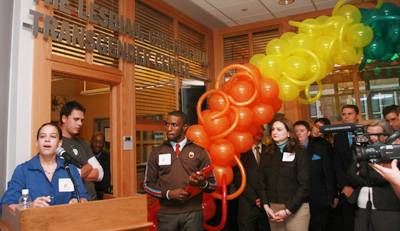 Kris Kersey, a member of the class of 2004 who helped present the task force's proposal to Tilghman, returned to campus for the center's dedication. "Having a center, a space that the University has given us … in one of its most critical and central buildings, says that being LGBT is a part of Princeton," he said. "What I'm celebrating today is not so much that we have a center, but the idea that being a Princetonian has opened up to include those who are LGBT. I don't have to say, 'I went to Princeton, and I'm also gay.' They are not two irreconcilable things."

Larry Lyons, a graduate student in the English department and a member of the Queer Graduate Caucus, said the center is a "social hub, library, de facto counseling center … and a rallying point for our campus activism." Lyons, one of three students who spoke at the ceremony, said it "serves as a beacon and a place of solace for those of us who have the misfortune of encountering homophobia or any form of intolerance."

Executive Vice President Mark Burstein, recounting his own experience in coming to the University, said that when he told Tilghman that he is gay, she stressed her commitment to "making the Princeton community someplace where anyone can thrive -- students, faculty or staff -- no matter what your background, no matter what your experience beforehand."

"She said it so passionately and persuasively that it was something that made me feel that I wanted to join Princeton as well," Burstein said. "I feel like this center is really another milestone in … making that happen. I'm very, very proud to be here today."

Princeton in top 20 for LGBT support