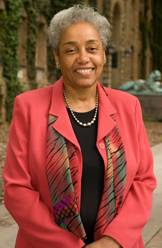 Janet Smith Dickerson, Princeton's first vice president for campus life, has announced plans to retire at the end of the academic year on June 30.

Dickerson, who joined the Princeton administration in 2000, has devoted a career of nearly 40 years to students at four U.S. colleges and universities. She intends to remain active in the Princeton community, but will spend more time with her family, including three daughters who live on the West Coast.

Executive Vice President Mark Burstein, to whom Dickerson reports, said that a search committee has been formed to seek a successor (see sidebar). He hopes to have a new vice president selected by the spring semester so that there are a few months of overlap.

"Janet's contributions to undergraduate and graduate student life at Princeton are immeasurable," he said. "She has significantly enhanced our community and culture, and has worked tirelessly to make sure that all students are able to take full advantage of the Princeton experience. Finding her successor will be a very difficult task. Fortunately we have time to conduct a thorough search, and her contributions to this institution will provide a superb platform for the next vice president for campus life."

Dickerson said, "I hope my successor will view this as a great job. It's been a wonderful job for me. I enjoy facing the opportunities and challenges each day brings."

Before Dickerson was hired, the title for the position was changed from dean of student life to reflect the broad administrative responsibilities of the position. She oversees the Office of the Dean of Undergraduate Students, the Department of Athletics, University Health Services, the Office of Religious Life and the Pace Center. She also had responsibilities for the Frist Campus Center when it opened in 2000. In addition, she has sought ways, in collaboration with the Graduate School, to enhance the quality of graduate student life.

"Janet Dickerson leaves a lasting mark on this university," said President Shirley M. Tilghman. "Not only has she championed many wonderful improvements to the experiences of students outside the classroom, most significantly the implementation of the four-year college system, she has personally touched the lives of so many students along the way. She has been a constant presence at student events, from football games in the stadium to prayer meetings in the chapel, and her door is always open for students in need of a friendly face and an understanding heart."

Princeton senior Connor Diemand-Yauman, president of the Undergraduate Student Government, added, "Vice President Dickerson is one of the most compassionate, dedicated and approachable administrators I've had the opportunity to work with. She has a rare ability to relate to students in a wide array of contexts and enthusiastically support them in their unique endeavors. She understands students, and fights fiercely for their right to have a fun, meaningful, unique and customized Princeton experience. She will be sorely missed, and I am personally very thankful for the profound influence that she has had on my time here at Princeton."

Dickerson came to Princeton from Duke University, where she had been vice president for student affairs for nine years. She spent 15 years at Swarthmore College, including the last 10 as dean of the college. She began her career in student life administration at Earlham College, where she was associate dean of students and assistant professor of education from 1971 to 1976. She earned her B.A. from Western College for Women (later merged with Miami University of Ohio) and her M.Ed. from Xavier University. She has done advanced graduate study at the University of Pennsylvania and at Harvard University.

At Princeton, Dickerson was part of the leadership team, along with Burstein and Dean of the College Nancy Malkiel, that planned for the transition from the two-year to the four-year residential college program. The final pieces of that program, for which planning began in 2000, are in place this fall with the opening of the new Butler College dormitories.

"I'm proud of the fact that we have six directors of student life who are additional and very important members of the team of deans and directors that create a support structure for the students in each college," Dickerson said.

She said she is "thrilled" to have new spaces on Prospect Avenue to complement the residential college program, including Campus Club, which is a gathering place for undergraduate and graduate students, and 58 Prospect, which is the home of the Fields Center, Community House and a portion of the Pace Center staff. Both of those facilities opened this fall.

Dickerson also co-chaired with Burstein the Diversity Working Group, which recommended steps the University could take to increase the diversity of its staff and outlined efforts to ensure a long-term commitment to supporting a staff that reflects a broad range of talents and perspectives. As a result, the University increased its administrative capacity and leadership in areas related to staff diversity in 2006.

Among Dickerson's other responsibilities during her tenure was co-chairing the Task Force on Health and Well-Being and its successor, the Healthier Princeton Advisory Board, with Vice President and Secretary Robert Durkee. In 2004, the task force made many recommendations, including increasing the staff in University Health Services and improving Campus Recreation facilities, that have been implemented.

Dickerson said she has been successful in seeking funds for improvements in those areas and others through the Priorities Committee process.

"I'm really proud to say that we received Priorities Committee support every year that I've been here," she said. "I'm so grateful that our staff has put together excellent proposals, but also that we've been able to capitalize by having students on the committee and others who know how much we needed the additional support in health services, the dean's office and Campus Recreation."

She is particularly pleased with the progress University Health Services has made since she arrived. "It is still an integrated service with medical and psychological services under unified leadership, but it's at a place closer to the center of the University," she said. "It's become in many ways a national model. We have a great staff."

One outgrowth of the two health groups she co-chaired is the Alcohol Coalition Committee. Made up mostly of students but also including faculty and staff, the committee is working to address high-risk drinking among undergraduates. Dickerson is the group's executive sponsor.

"This group has a wonderful structure that gives students the responsibility for taking up these issues," she said. "It has recognized that we can't change campus culture unless students have a leadership role."

In reflecting on areas where she felt she has contributed the most at Princeton, Dickerson constantly listed the people, groups and offices that have helped her in her endeavors.

"I certainly don't want to take credit for anything personally," she said. "Together, we've really worked to expand opportunities for students."

Some of the other areas where Dickerson felt she and others have made significant progress included:

• the thriving of the Frist Campus Center, which some administrators feared might be a "white elephant" and which has become "central to all of our lives," she said.

• the expansion of facilities and the building of a community of friends groups in athletics.

• the establishment of the Lesbian, Gay, Bisexual, Transgender Center in Frist and enhanced support for the other cultural centers.

• the flourishing of the Pace Center, bringing under one umbrella the University's civic engagement efforts.

• the work of the Undergraduate Life Committee, which she co-chairs with a student and has helped deal with issues including substance-free sections and smoking in the dorms, alcohol, health services, career services, the bookstore, transportation and parking, public safety, race relations, independent student issues, students with disabilities, and economic equity.

• the efforts -- such as Sustained Dialogue, which Dickerson has been instrumental in supporting -- to increase understanding between divisions in society including race, gender, religion and social class.

• the success of efforts to enhance the presence and voices of students at University trustees' and other leadership meetings, and to make the Princeton community a more inclusive place for all.

Dickerson acknowledged that her roles as University liaison to the ROTC and to the Princeton Blairstown Center have been personally as well as professionally rewarding, as has her service as a trustee of McCarter Theatre. She also has enjoyed representing Princeton on the Policy Committee of the Ivy League.

As for her fondest memories, Dickerson brings up a sad time, but one she felt demonstrated the unity among her staff that she had been seeking to achieve. A student had died in an accident off campus, and the community had gathered for a memorial service.

"One of the things I was working on was to help us feel like we have a mission in common even though we are actually very different groups from one another," Dickerson said. "But we are all focused on the student and the student experience. We all care deeply about the whole student. Even in the face of such pain, we were all there together. And we made a lot of connections with those most impacted by the tragedy."

After she retires, Dickerson said that she first plans to take "a little sabbatical." Then she intends to continue her work as an active member of community organizations. She also hopes to travel and to write.