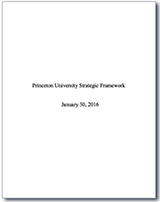 Princeton University's Board of Trustees has adopted a strategic planning framework that aims to enhance the University's core commitments to excellence in teaching and research, and to such fundamental principles as affordability, diversity, inclusivity and service, while also strengthening its capacity to have "significant and lasting impact" at a time of transformative social and technological change.

The framework identifies key goals and major priorities for the University and articulates standards and questions that will be used over the coming years to guide decisions about new programs and capital investments. While it identifies some areas where specific decisions have been made, its principal objective "is not to specify all of the University’s future initiatives, but to create a planning framework for determining them and for understanding the trade-offs among them."

The chair of the board, Kathryn A. Hall, said the trustees "adopted the framework enthusiastically" following two years of intensive deliberations, informed by extensive background information and the work of numerous campus-based task forces. "We believe the framework provides a clear reaffirmation of Princeton's mission and its defining characteristics, and a compelling blueprint for building on and enhancing Princeton’s capacity to achieve the highest possible standards of teaching and research," she said. "We look forward to working with President Eisgruber and other members of the University community to achieve the goals and priorities that we have articulated."

"I am very grateful to the trustees and the many members of the University community who helped to develop a framework that builds on Princeton's distinctive strengths, reaffirms our commitment to the liberal arts and to the value of service, and lays out a compelling vision for the University's future," said President Christopher L. Eisgruber.

"While the completion of this framework is a significant achievement, more planning remains ahead of us," he said. "The framework identifies a number of goals that will require very substantial commitments of resources and significant fundraising—including expansion of the undergraduate student body and new facilities to support engineering and environmental studies—and all of the priorities it articulates will require thorough consultation, wise decision-making, and the judicious allocation of funds."

In the framework document, the trustees reaffirm Princeton's distinctive mission as a "residential research university committed to an expansive vision of the liberal arts" that encompasses the arts and humanities, the social sciences, the natural sciences, and engineering and the applied sciences. Incorporated into it is a mission statement and a set of defining characteristics and aspirations; the mission statement calls upon the University to continue to advance "learning through scholarship, research, and teaching of unsurpassed quality, with an emphasis on undergraduate and doctoral education that is distinctive among the world's great universities, and with a pervasive commitment to serve the nation and the world."

Under "supporting excellence in the University’s core mission," the framework calls for:

Under "meeting Princeton’s responsibilities for leadership in research and education," the framework calls for:

Under "responding to technology’s impact on research, education, and society" the framework calls for: 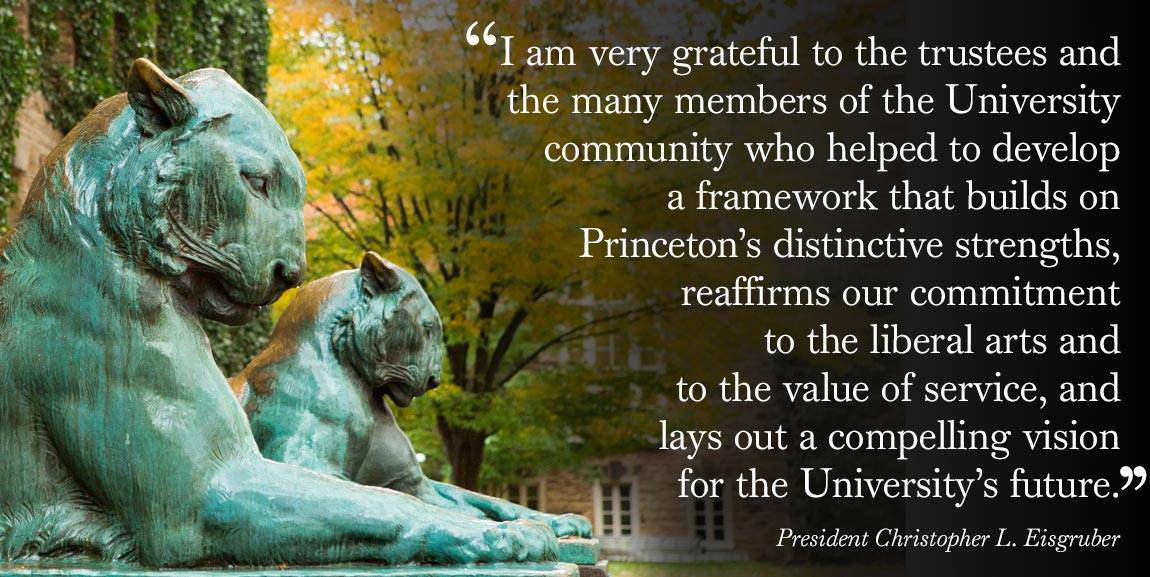 The framework points out that "to execute its mission successfully, Princeton must have the resources needed to attract talented faculty members who are leaders in their fields and students from a broad range of backgrounds and circumstances, and enable them to develop and use their abilities fully." It also points out that the University must be "able to grow its financial aid budget to ensure that every student it admits can afford to attend, while it must also be able to increase research and scholarly expenditures to ensure that faculty members have access to the equipment and archives that their work requires."

The framework attributes the financial strength of the University principally to the generosity of its donors and exceptional stewardship of their gifts through the endowment. Whereas endowment payout provided only about 14 percent of the University's operating revenue in 1985, it now accounts for 47 percent. Princeton uses its endowment payout every year to support current programs as well as new initiatives and capital projects.

As part of the planning process, the trustees last summer modified the University's endowment spending policy by increasing the upper level of the target range for annual payout from the endowment from 5.75 percent of its value to 6.25 percent. (The lower level of the target range remains at 4 percent.) The trustees made this change to accommodate increasing market volatility and reduce the likelihood that future generations would be favored over present ones or that financial capital would be favored over human and physical capital.

The trustees noted that the current spending rate is close to the low end of the range, and concluded that the University should be willing to make greater use of its financial capital to enhance its human capital, physical capital and mission at times when it is able to act strategically. The trustees agreed to consider proposals for increased spending from the endowment in the coming years to give the University greater capacity to co-invest with donors to achieve its strategic priorities.

The strategic planning process began in January 2014. Campus task forces were formed to deliberate on a broad range of topics; a number of them continue to meet and new ones may still be formed. The trustees met with representatives of many of the task forces and considered preliminary reports from them in preparing the planning framework. (Completed task force reports are posted on the strategic planning website.) One goal of the planning process was to generate more proposals than could be implemented to allow for full appreciation of the tradeoffs involved in proceeding with any particular proposal.

Guided by the planning framework, the administration will review the task force recommendations with an expectation that some will be pursued further, some will not, and some will go forward only if there is sufficient philanthropic support to pay for them. Proposals that require a significant commitment of resources will be brought to the trustees through their usual processes and both the administration and the board will evaluate proposals on the basis of criteria that are outlined in the report.

The planning framework is intended to be flexible and revisable, and both the trustees and the administration will annually review progress toward its goals. It proposes standards for evaluating success that the board will use as it conducts quadrennial reviews of the framework and updates and revises it so it remains a useful guide for decision-making.

'A liberal arts university for the 21st century'

The framework concludes by noting that "among the world’s great universities and colleges, Princeton University has long been recognized for its distinctive model and mission. In an era when many other research institutions have become 'multiversities' … Princeton has remained resolutely focused on the excellence of its programs in the arts and humanities, the social sciences, the natural sciences, and engineering and the applied sciences. In times when many people measure the quality of universities through metrics that privilege size or quantity, Princeton has instead emphasized the uniformly high quality of its faculty and students and the vibrancy of the personalized contact made possible by the human dimensions of its campus and its educational enterprise. When much of the world separates higher education institutions into colleges that focus on teaching and universities that concentrate on research, Princeton insists that teaching and research are not only mutually compatible but indeed synergistic, demanding that the frontiers of scholarly inquiry be brought into its classrooms and recognizing that exchanges between teachers and students may generate sparks of creativity that ignite innovation and discovery.'

The trustees concluded that 'Princeton’s distinctive model and mission are today more vibrant, valuable, and relevant to the world’s problems than ever," that the University has a "special capacity to deliver teaching and research on questions both profound and urgent," and that achieving the priorities identified in the report would allow the University to extend "the principles that define it as a liberal arts university into the 21st century" and to honor "its commitment to serve the nation and the world."