"India has growing importance to the world and to Princeton," Eisgruber said. "I am delighted to have had the opportunity to visit this fascinating country and to connect with alumni, parents and friends of the University who live there. We learned a great deal from the alumni, business leaders and academics with whom we met.  I look forward to returning."

Eisgruber kicked off the busy week by speaking in Mumbai on Sunday, March 13, at a gathering attended by about 60 alumni and other guests. About 90 people attended a gathering in New Delhi on Tuesday, March 15. Both events drew undergraduate alumni, graduate alumni, parents of Princeton students from India and students given early-action admittance to the Class of 2020.

On Wednesday, March 16, Eisgruber met in New Delhi with officials at the American embassy, where former Princeton President Robert Goheen – who had grown up in India – served as U.S. ambassador from 1977 to 1980.

Michael Pelletier (left of center), the deputy chief of mission at the US embassy in New Delhi, is flanked by Princeton President Christopher L. Eisgruber and University Vice President and Secretary Robert Durkee in a photo taken at the embassy March 16. Other senior officials at the embassy are in the photo along with Cecilia Rouse (second from left), dean of Princeton's Woodrow Wilson School of Public and International affairs; Margaret Miller, associate vice president of Alumni Affairs; and Livia Wong McCarthy, senior associate director for regional affairs in the Office of Alumni Affairs. (Photo courtesy of US embassy, New Delhi)

Later that day, Eisgruber was the featured speaker at a higher education roundtable convened by Ashoka University, a residential liberal arts institution near New Delhi that accepted its first undergraduate class in 2014. Eisgruber stressed the importance of investing in higher education in democratic societies – in both state-supported and private colleges and universities – a theme he emphasized again Thursday, March 17, in a roundtable discussion at the Centre for Policy Research.

Eisgruber also met with several representatives of the Indian press. A reporter from the Indian Express newspaper asked Eisgruber about recent comments by an Indian government minister who, following the arrest of a student leader in India, asserted that no American university would allow students to hold a meeting commemorating Osama bin Laden.

Eisgruber said that Princeton’s policies regarding freedom of speech would protect the right of students to hold such a meeting. Citing a policy Princeton’s faculty adopted last year, he said the University's commitment to freedom of speech protects the right of a speaker to make even very offensive comments and that the University would not discipline a student based on the nature of the student’s statement. As a constitutional scholar, he noted that free speech protection is provided in the United States by the First Amendment to the constitution.

"We at Princeton believe that it is a fundamental advantage for a university to be able to tolerate even offensive kinds of speech and to respond to bad arguments when they are made with more speech rather than with disciplinary actions," Eisgruber said, adding that under some circumstances he might issue a statement saying that the offensive comments were inconsistent with the views of the University.

The India trip is the latest round of international outreach Eisgruber has made since becoming the University's 20th president in 2013. Previous trips have included stops in Beijing, Berlin, Davos, Hong Kong, London, Paris, Seoul, Singapore, Tel Aviv, and Tokyo. 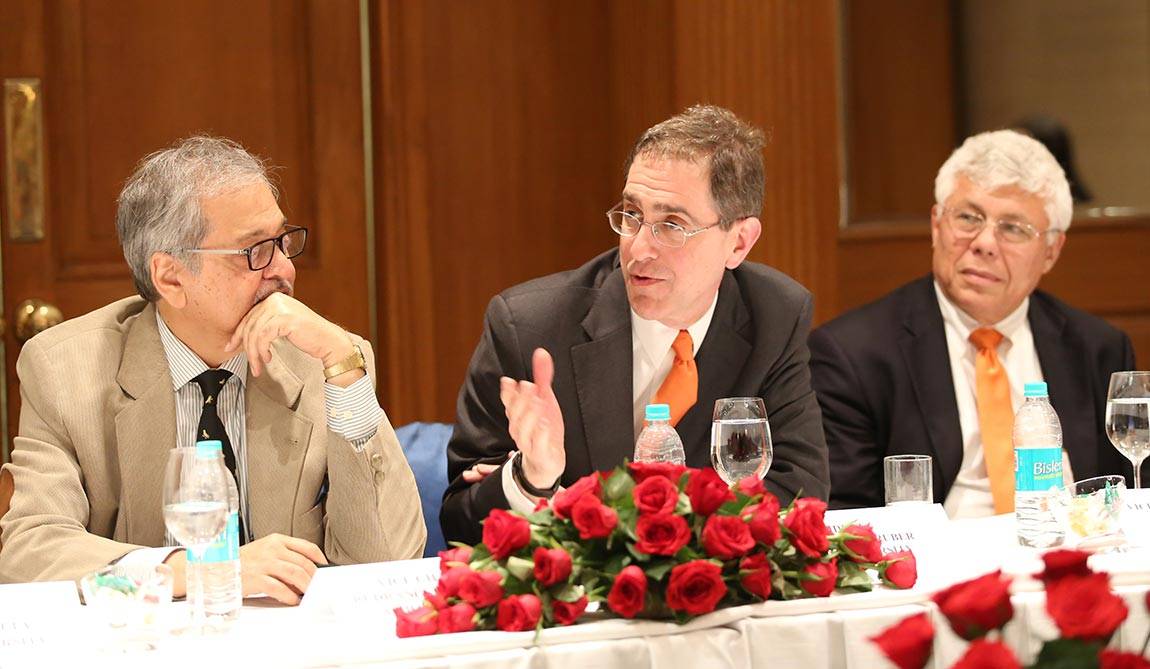 President Eisgruber begins Asia trip in Tokyo, then to Seoul and Beijing

President Eisgruber heading to Asia for visits with alumni, universities