Researchers have found that the "Great Firewall" technology that controls internet traffic entering and leaving China is not merely an apparatus that statically blocks traffic. It also actively sends probes to other machines that are connected to the internet, preemptively searching for internet infrastructure and services that seek to circumvent its defenses.

"The Great Firewall is actively trying to find these sites so it can block them," said Nick Feamster, a professor of computer science at Princeton and the acting director of the University's Center for Information and Technology Policy. "Active reconnaissance is the next step in the arms race."

In contrast to the decentralized management that characterizes much of the internet, China's internet is tightly controlled: traffic entering and leaving the country passes through infrastructure in just a few physical locations.

"It allows the Chinese government to see most traffic between China and the rest of the world," said Roya Ensafi, a postdoctoral researcher in computer science at Princeton who worked on the project.

In a paper presented at the Association for Computing Machinery's SIGCOMM Internet Measurement Conference in Tokyo on Oct. 30, the researchers demonstrated how the Great Firewall identifies and blocks traffic. As a first step, Ensafi said, the system searches for keywords and terms in a message: something like "Falun Gong" might cause the Great Firewall to block subsequent communication, for example.

To circumvent these controls, citizens often use software that obfuscates the communications, such as the Tor network. This system sends traffic through a sequence of network nodes called relays in between the sender and receiver. At each relay, traffic is re-encrypted, ensuring that no node in the network can link the sender to the receiver. The encryption itself also provides a level of confidentiality. 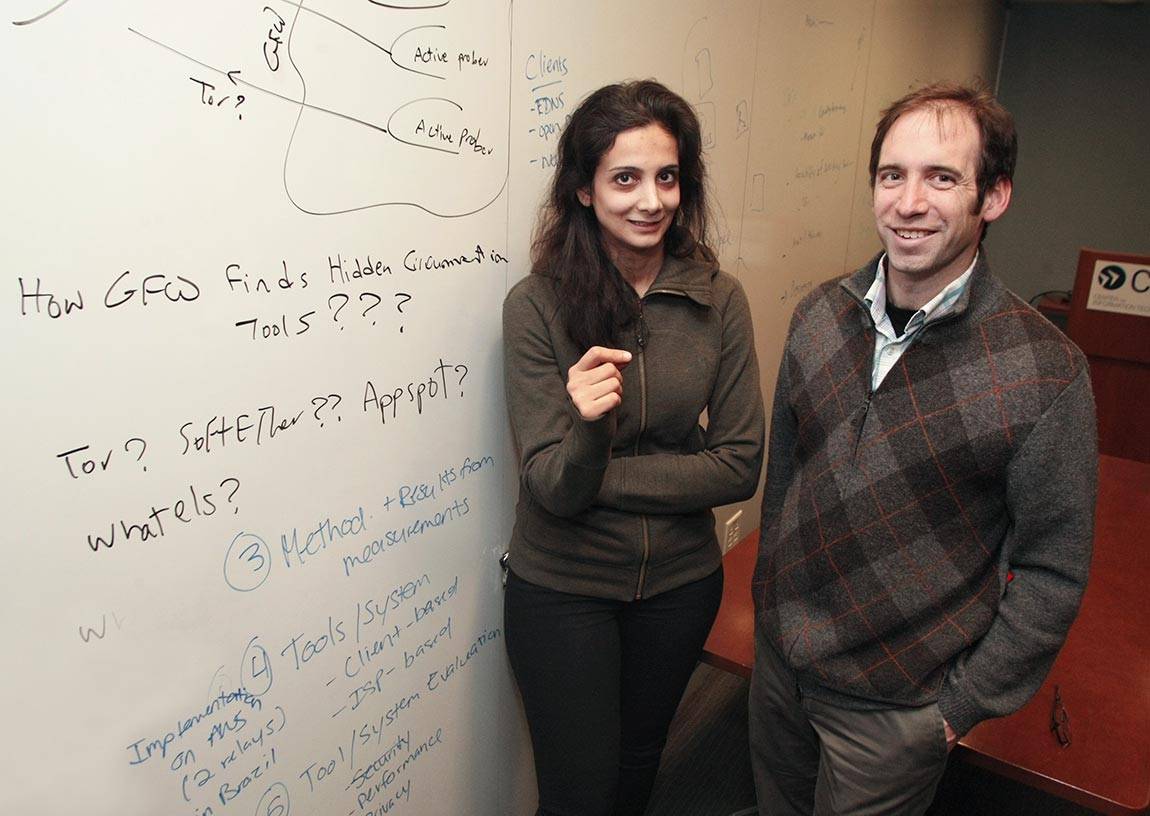 Network operators in China do not want to block all internet connections, but they do want to prevent users from accessing any service that helps them circumvent the Great Firewall, the researchers said. When the firewall determines that traffic might involve Tor usage, they typically need to take extra steps to confirm that the traffic pertains to Tor before blocking the communication.

"Incorrectly blocking traffic that appears to be Tor traffic but is not can cause collateral damage, and they [network operators] cannot afford to block everything," Ensafi said. "To increase the confidence in what they are blocking, they began actively probing machines that appear to be running Tor infrastructure."

"If they guess it is Tor, they try to make a connection to establish whether it is using the Tor protocol," Ensafi said. "If it is, they block traffic coming from that connection."

Keith Winstein, an assistant professor of computer science at Stanford University who was not involved in the research, said the paper carefully measured the probing techniques used by the Great Firewall.

"It really shows a level of sophistication of the Chinese system that I don't think was publicly appreciated before," said Winstein, who also has an appointment at the Stanford Law School. "It is hard to think of a more important topic for security research than the cat-and-mouse game between the authors of communications tools and governments who want to monitor and police communications on the internet."

The researchers said it is not possible for systems like Tor to completely prevent the Great Firewall from probing the Tor network because the firewall continually changes the locations from which it sends its active probes.

One way to avoid blocking is to deploy circumvention systems like Tor across a set of machines distributed across the Internet, known as a Content Delivery Network (CDN). These delivery networks tend to host content for a large number of internet websites and services. Therefore, firewall administrators would not be able to simply block access to the network locations hosting the Tor entry nodes without also blocking access to other content, thus inflicting significant "collateral damage."

The researchers said Tor has begun to take this approach and is also trying to make its communications more difficult to detect in general.

"In response to the Great Firewall's active probing, Tor developers are developing new techniques to obfuscate the handshakes between the client and Tor entry nodes," Ensafi said. "These obfuscation techniques work by encapsulating the initial handshake inside other 'innocuous' protocols to make it more difficult to identify the initial handshake."

The ongoing efforts to obfuscate Tor traffic has led to a cat-and-mouse game, as Tor tries to disguise its traffic, and Chinese network operators continue to develop techniques to detect it.

"It is an ongoing battle," Ensafi said.

In addition to Feamster and Ensafi, the paper's authors include Philipp Winter, a postdoctoral researcher in computer science at Princeton and a fellow at Princeton's Center for Information Technology Policy (CITP); and David Fiefield, Vern Paxson and Nicholas Weaver of the University of California-Berkeley. The National Science Foundation, the Open Technology Fund and the U.S. State Department funded the project.

New tool detects malicious websites before they cause harm