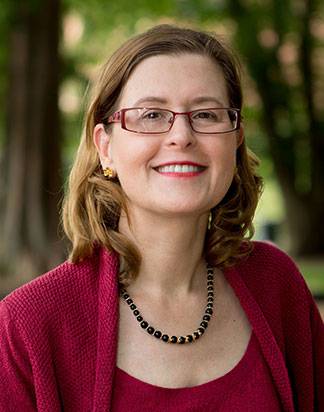 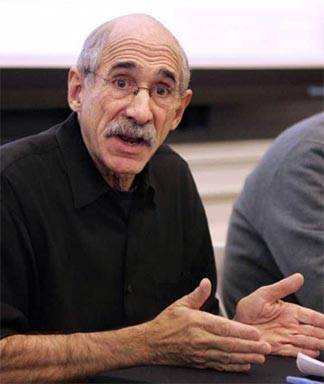 The negative effects of climate change on the world's children and possible responses brought together two Princeton researchers from very different fields to contribute to the new issue of The Future of Children, a journal that promotes effective policies and programs for children.

Janet Currie, the Henry Putnam Professor of Economics and Public Affairs, chair of the Department of Economics and director of the Center for Health and Wellbeing, served as co-editor of the "Children and Climate Change" issue of The Future of Children, which was released Wednesday, May 4.

Michael Oppenheimer, the Albert G. Milbank Professor of Geosciences and International Affairs and the Princeton Environmental Institute, co-wrote the issue's first article, which explores "The Science of Climate Change."

The journal is available online here.

The Future of Children is a joint publication of the Woodrow Wilson School of Public and International Affairs at Princeton and the Brookings Institution. Sara McLanahan, the William S. Tod Professor of Sociology and Public Affairs and director of the Center for Research on Child Wellbeing, is editor-in-chief of the journal. Cecilia Rouse, dean of the Wilson School, the Lawrence and Shirley Katzman and Lewis and Anna Ernst Professor in the Economics of Education and professor of economics and public affairs, is a senior editor. Currie is also a senior editor, along with Ron Haskins and Isabel Sawhill of Brookings.

Currie, whose research focuses on child health, and Oppenheimer, who studies the mechanics of climate change, answered questions about what drew them to the topic of children and climate change and how it fits with their own work. 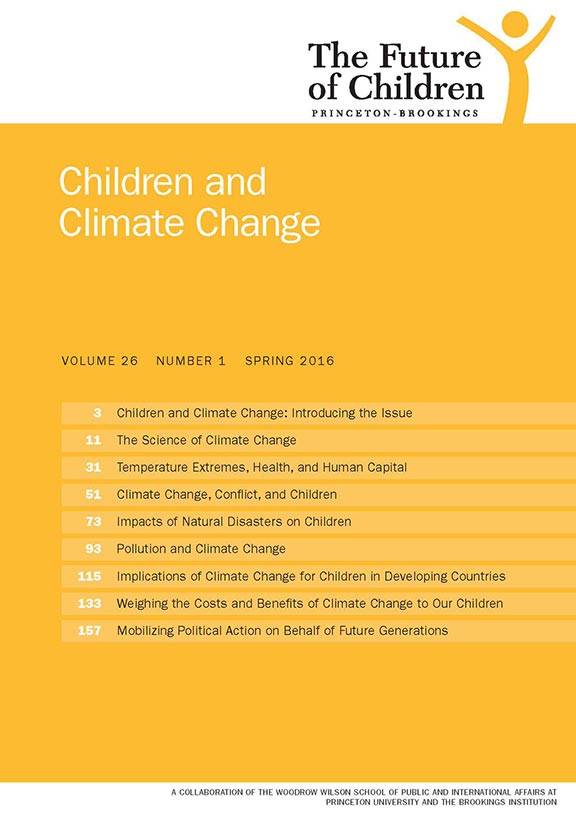 Question: Why is the topic of children and climate change so important?

Currie: While people often talk about climate change as something that will affect "future generations," we thought it important to be more specific about the very real ways in which children are likely to suffer.  For instance, children are more sensitive to high temperatures than adults, and in natural disasters (which are expected to become more frequent because of climate change) children are often the most impacted. Moreover, because most spending on children is discretionary while spending for the elderly is not, increased spending for the mitigation of climate change threatens programs for children much more than it threatens programs like Social Security.

Q: What are the key overall takeaways from this issue of the Future of Children?

Currie: There are several themes that run through the chapters of this volume. First, there is no longer any doubt that climate change will fundamentally alter the earth's climate system in ways that threaten children's physical and mental well being. In fact, children will bear a disproportionate share of the impact.  Poor children (both domestically and internationally) will face the greatest risk because they will have access to fewer resources to try to mitigate the effects. Finally, there are good reasons why it has proven so difficult to muster the will to act decisively. There remains a great deal of uncertainty about what exactly the impacts will be. And any mitigation effort requires sacrifices now for gains that will only accrue in future. This makes climate change policy a very "heavy lift."

Q: How does the issue of children and climate change relate to your broader research?

Currie: My work over the past 25 years could be characterized as assessing the impact of "the environment" broadly defined on children's health and well being. So it is fairly natural to go beyond thinking about the child's immediate family, to the local and national policy environment, and ultimately to the global climate. I was personally particularly interested in the chapter on pollution and climate change. I have done a good deal of research looking at how specific pollutants such as carbon monoxide, and more recently lead, affect young children. It was interesting to consider the fact that some measures aimed at mitigating climate change will also reduce pollution, while other pollution controls measures, such as limiting particulates, might actually hasten global warming.

Oppenheimer: Most of my work aims to understand the physics of the Earth system, especially sea level rise, and ways society can defend itself while reducing the emissions causing the problem. Children and other vulnerable groups have done the least to cause the problem in the first place. Any plausible concept of fairness would require us to make special efforts to shape solutions with a special focus on the welfare of those most vulnerable.

Q: As one of the editors of the journal, Professor Currie, why was it important to include Professor Oppenheimer's overview of "The Science of Climate Change"?

Currie: Professor Oppenheimer is one of the foremost authorities on the science of climate change, so it was wonderful to have him set the stage by discussing the hard scientific facts about global warming. There is no longer any room for doubt that climate change is happening and will have a significant impact going forward.

Q: What are some of the lessons from science about the impact of climate change on children?

Oppenheimer: Climate change entails a panoply of risks, many of which are already manifest in detectable ways: extreme heat, regionally intensified drought, stronger rain events accompanied by inland flooding, rising sea levels and increased coastal flooding. Children are more vulnerable to each impact than a typical adult: more sensitive to heat, unable to swim through rising waters, more at risk from nutrition deficits. The threat to adults is amplified for children across the board.

Q: Why is it important to apply the work you do to this kind of project?

Oppenheimer: Science is wonderful, but its highest value is manifest when it can be applied to improve the human condition. Identifying the risks of climate change and quantifying them as precisely as possible not only makes the stakes clear to governments implementing emissions reductions but allows policy makers to pinpoint adaptations which can reduce the threat. That kind of proactive remediation doesn't come from physical science alone. This kind of project brings together natural and social scientists in productive partnership to develop the policy concepts that, when implemented, can give adults and children alike a chance to cope with the looming difficulties.