by Sharon Adarlo, Andlinger Center for Energy and the Environment, and Stacey Huang, Class of 2016, for the Office of Engineering Communications

In his presentation last week at the Andlinger Center for Energy and the Environment at Princeton University, Avalos said current efforts to improve the yeast used to make biofuel often ignore the role that natural selection can play in the development of new yeast strains. A different approach would be to use evolutionary forces to develop new strains better suited to biofuel production.

Avalos, one of the center's new faculty, was one of 17 speakers to present their innovative ideas at the center's Building Opening Celebration and Symposium May 18-20. The symposium featured the center's jointly appointed faculty highlighting their research in sustainable energy, as well as industry and government leaders outlining their visions for the future of energy and the environment. Beyond Avalos, Andlinger faculty presented novel approaches to batteries and electrical storage, environmentally sustainable concrete and building materials, improved thin-film LEDs and solar cells, energy-efficient building systems, and control of fusion plasmas.

"Instead of working against evolution, it would be better to make evolution work for us," Avalos, an assistant professor of chemical and biological engineering and the Andlinger Center, said after his presentation about efforts to create a strain of yeast that produces heavy alcohols with higher energy density than ethanol, the biofuel that is used currently. Switching to heavier alcohols would allow the United States to greatly increase the amount of biofuel that can be used above the 10-15 percent that is most commonly used in gasoline blends. Avalos also wants to make biofuels from cellulose and other non-edible sources to ensure their production is sustainable. 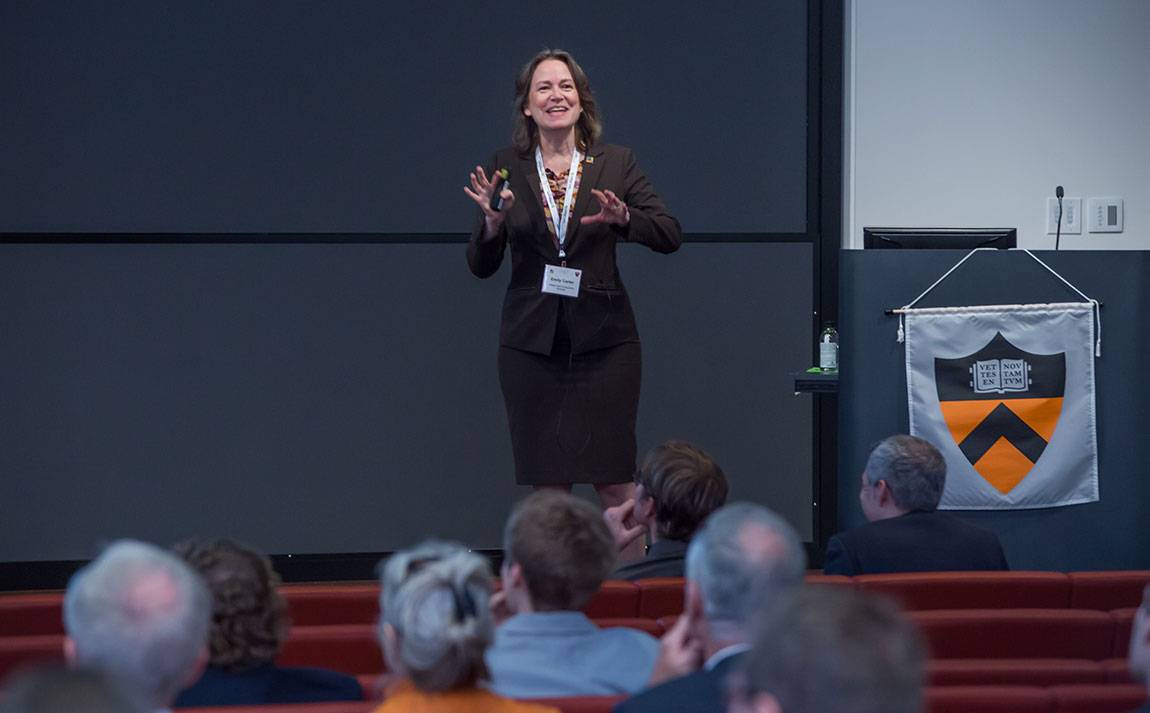 A three-day symposium May 18 to 20 celebrated the opening of the new building for the Andlinger Center for Energy and the Environment at Princeton University. The symposium featured talks by Andlinger Center faculty, who highlighted recent research advances, as well as government and industry leaders outlining their visions for the future of energy and the environment. The center's founding director, Emily Carter (above), gave opening remarks and an overview of the center's activities since it was founded in 2008. (Photos by David Kelly Crow for the Office of Engineering Communications)

The Andlinger Center's building was completed this year, enabled by a gift in 2008 by Gerhard Andlinger, a member of the Princeton Class of 1952 and chairman and founder of the private investment firm Andlinger & Co. Constructed to accommodate specially built themed laboratories and state-of-the-art central facilities, along with abundant natural light and many green building features, the complex is a physical manifestation of the center's mission: to preserve the planet for future generations through innovative, sustainable, energy and environmental technology and policy research and education that is collaborative and crosses disciplinary and professional borders.

"You don't know where the breakthroughs will come from," said the center's founding director, Emily Carter, the Gerhard R. Andlinger Professor in Energy and the Environment and professor of mechanical and aerospace engineering and applied and computational mathematics. Carter, who will become dean of Princeton's School of Engineering and Applied Science on July 1, explained that the center's approach is to support research and education in a wide variety of technologies and policies to build a portfolio of solutions to provide sustainable energy and environmental protection for the future. "You don't place bets on just one idea," she said.

The symposium was preceded by a ribbon-cutting ceremony to celebrate the opening of the building and began with a second ribbon-cutting to dedicate Maeder Hall in recognition of a gift from Paul Maeder, a 1975 Princeton alumnus and managing general partner and founder at Highland Capital Partners. 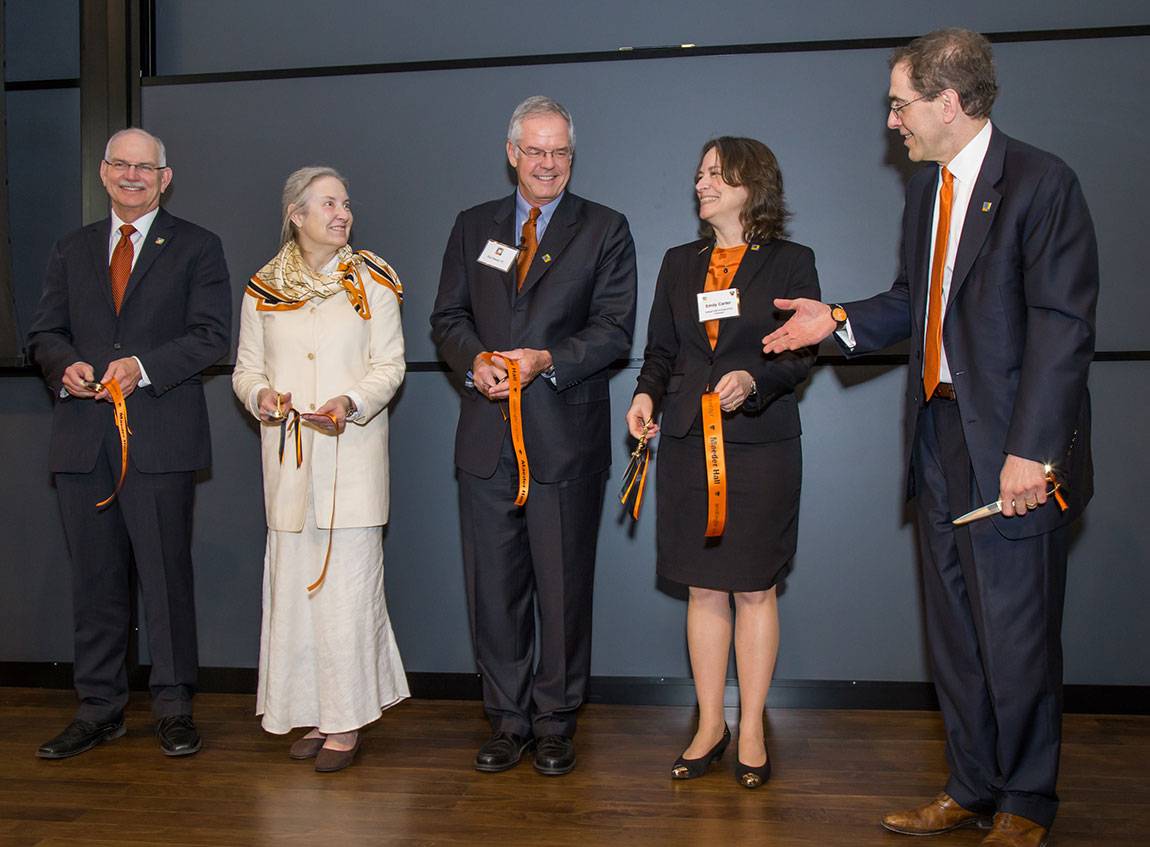 The symposium opened with a ribbon-cutting ceremony for Maeder Hall to honor a gift by 1975 Princeton alumnus Paul Maeder. Participating in the ceremony were, from left, H. Vincent Poor, dean of engineering; Gwill York and husband Maeder; Emily Carter, founding director of the Andlinger Center; and President Christopher L. Eisgruber.

Speakers included Ralph Cicerone, president of the National Academy of Sciences and renowned atmospheric scientist, who opened the symposium by laying out the lines of evidence for climate change induced by fossil fuel burning; he was followed by Ellen Williams, director of the U.S. Department of Energy's Advanced Research Projects Agency–Energy (ARPA-E) who offered glimpses into possible solutions. The slate of high-profile speakers continued with Elizabeth Sherwood-Randall, deputy secretary of energy of the energy department; Norman Augustine, Princeton Class of 1957 and former CEO of Lockheed Martin; and Richard Kauffman, chairman of energy and finance for New York State.

In his remarks, Cicerone presented sobering data about how human activity and the burning of fossil fuels are affecting climate change.

"The underlying trend is up," he said regarding increasing sea levels, warming temperatures in Arctic areas and other signs. 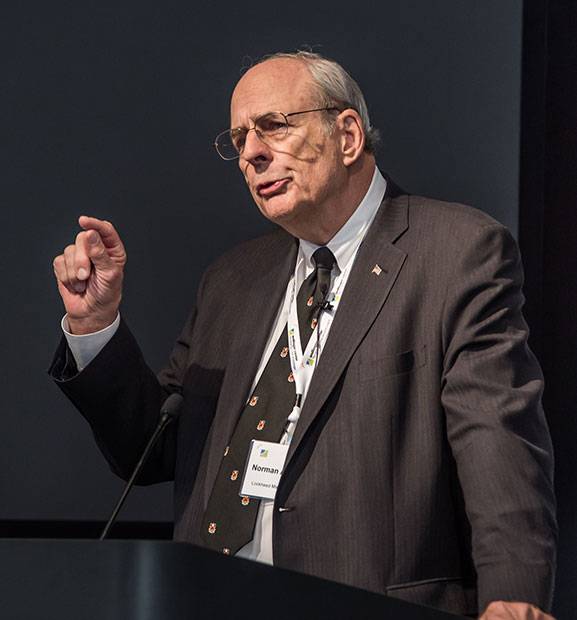 Norman Augustine, a member of the Class of 1957 and a 1959 graduate alumnus and retired chairman and CEO of Lockheed Martin Corporation, gave a wide-ranging speech that covered the future of energy and environment research, climate change's impact, and the need for investment and research collaboration.

Complementing Carter's call for a broad suite of new technologies, Williams emphasized the importance of creating practical solutions in research, whether for commercial products or research infrastructure. It is important, she said, to show to others that this research is useful and economically feasible.

Williams highlighted projects ARPA-E is funding such as developing materials to retrofit single-pane windows in older homes for greater energy efficiency, and developing plants that would capture more carbon dioxide in their roots.

Augustine warned that such critically needed efforts are underfunded and called for sustained public investment in research and education.

Kauffman discussed New York's efforts to modernize utilities and the energy infrastructure. He underscored the state's sustainable energy goals such as having renewable sources power 50 percent of its energy needs.

The symposium concluded with a panel discussion on the center's Energy Technology Distillates, a series of publications that provide succinct yet substantive information on emerging topics in energy and the environment that combine technological, economic and policy considerations, including teaching key concepts for the non-expert. The briefings are geared for policymakers, educators, students and any interested citizen. Robert Socolow, professor of mechanical and aerospace engineering emeritus and a senior research scholar, chaired a panel of four graduate students who were among 10 who, together with Socolow, researched and wrote the latest Distillate, "Fusion Energy via Magnetic Confinement."

"Many U.S. Congress members are interested in fusion energy, but are confused by the technology," said Janam Jhaveri, one of the panelists and a doctoral candidate in electrical engineering, pointing out one need for the Distillate.

The symposium also included a poster session highlighting results from postdoctoral and student research related to energy and the environment. The subjects on display showed the breadth of projects being pursued at the University and the center — from electric boat motors to innovative alternatives for low-carbon-emission concrete.

Many of the speakers saluted the center's focus on fostering dialogue between researchers, industry and policymakers.

"A breakthrough is unlikely to come from scientists and policymakers just working harder on what we're already working on in isolation," said Augustine. "Breakthroughs are likely to be the result of a confluence of scientists and engineers from government laboratories, universities and industry, working together with policymakers. Together, they bring the knowledge base and the financial resources that are needed for the development of new technologies."

"That's one of the greatest strengths of the Andlinger Center," Augustine noted. His remarks echoed those Maeder made in his opening statement.

"There's a huge gap in understanding between the researchers who do climate science, the policymakers and ultimately the voters who really create policy," said Maeder. "If we don't bridge that gap, we're going off a cliff. I think the most important thing that the Andlinger Center can do is to bring people from across campus and get them to understand this difference." 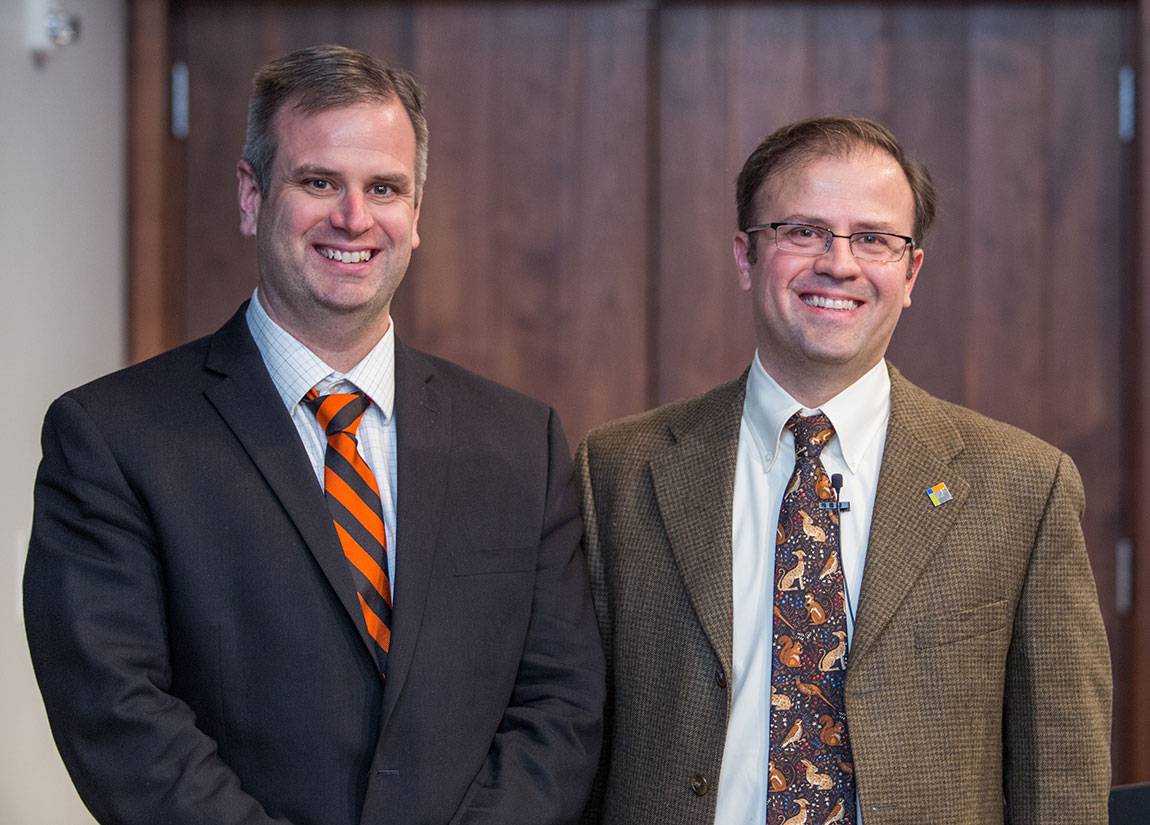 At the symposium were, from left, Paul Chirik, the Edwards S. Sanford Professor of Chemistry and associate director for External Partnerships in the Andlinger Center; and José Avalos, assistant professor of chemical and biological engineering and the Andlinger Center. Avalos gave a presentation on biofuels at the event.