Alumnus Norman R. Augustine and his wife, Margareta “Meg” Engman Augustine, have made a gift to Princeton University to endow three professorships in the School of Engineering and Applied Science. 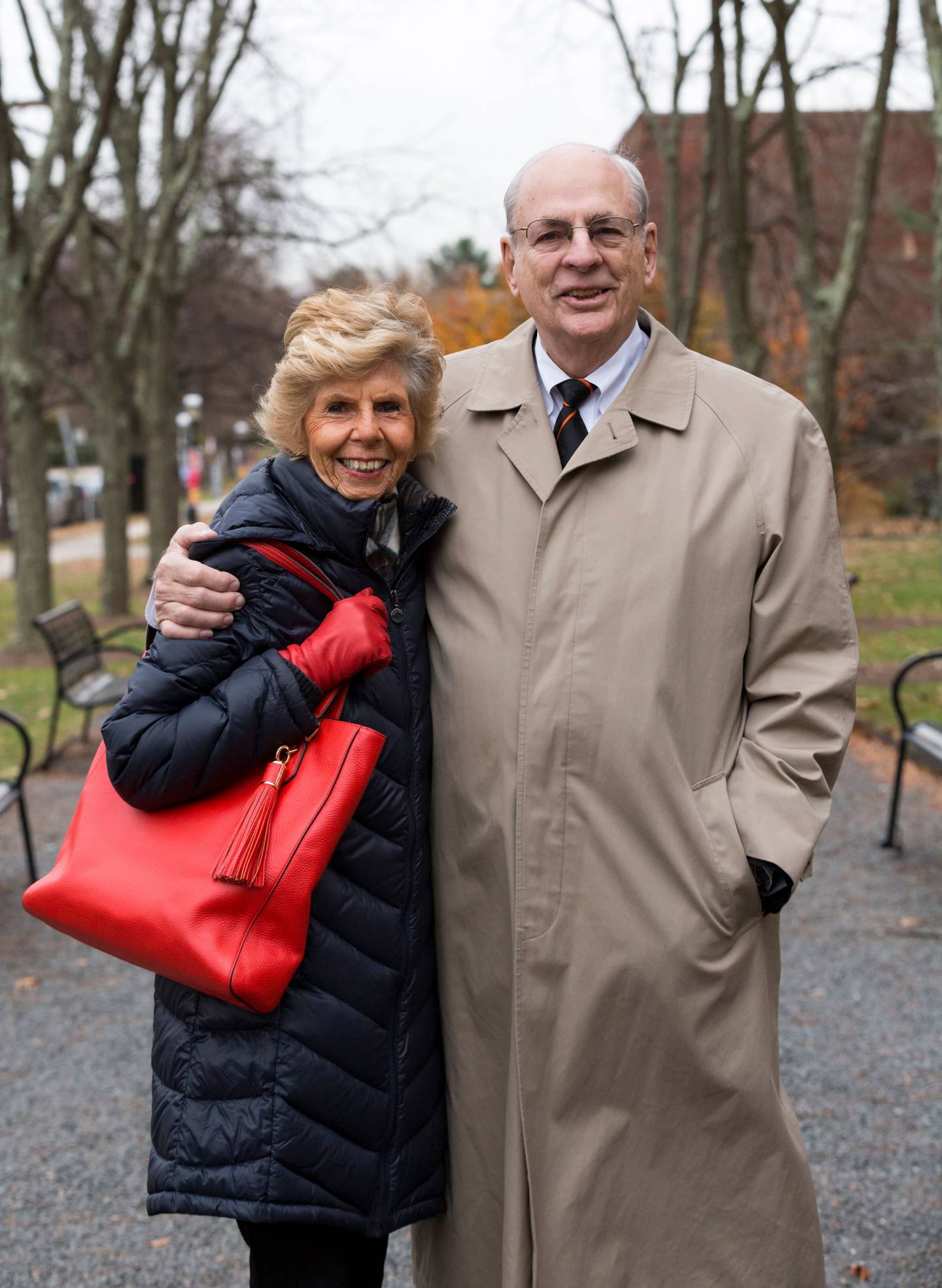 Endowed professorships are Princeton’s highest academic honor for faculty members, bestowed on distinguished professors who break new ground in their disciplines and inspire their students.

“These three professorships will honor accomplished scholars who address the world’s most urgent challenges through outstanding teaching and groundbreaking research,” said Princeton President Christopher L. Eisgruber. “Norm and Meg Augustine are special friends of this University who have exemplified its values throughout their lives. They have my deepest gratitude for their exceptional generosity.”

The Augustines cite climate change, health care, infrastructure and job creation as key examples of challenges that demand scientific and technological solutions. “If you need clean sources of energy, who do you go to? You go to engineers and scientists to develop them,” Norman Augustine said. “You can go on down the list with other critical problems that face us, and it’s amazing how many of them require engineering for at least part of their solutions. World-class faculty is absolutely critical to addressing these issues and creating the next generation of engineers.”

The Augustines have also supported Annual Giving, scholarships and athletics at Princeton, and Norman Augustine has been a lecturer with the rank of professor in the School of Engineering.

“The Augustines have long been two of our most enthusiastic and dedicated advocates, and I am tremendously grateful for this visionary gift and the impact it will have,” said Emily Carter, dean of the engineering school, the Gerhard R. Andlinger Professor in Energy and the Environment, and professor of mechanical and aerospace engineering and applied and computational mathematics. “The Norman R. Augustine ’57 *59 Professorship, Margareta Engman Augustine Professorship and Augustine Family Professorship will all support the excellent education and mentorship that students must have to devise innovative solutions to the challenges facing the world.”

Norman Augustine, who earned a bachelor’s degree from Princeton in 1957 and a master’s degree from Princeton in 1959 — both in aeronautical engineering — has been a leader in industry, government and the nonprofit world. He has been the acting secretary of the Army, undersecretary of the Army, president and then chairman and CEO of Lockheed Martin, and chair of several commissions, including the National Academies “Gathering Storm” committees and the Advisory Committee on the Future of the U.S. Space Program. He was a member of the advisory board to the Department of Homeland Security, a member of the Hart/Rudman Commission on National Security, and served for 16 years on the President’s Council of Advisors on Science and Technology. He is a member of the National Academy of Engineering, the National Academy of Sciences, the American Academy of Arts and Sciences, and the American Philosophical Society.

Augustine was chairman and principal officer of the American Red Cross for nine years, chairman of the National Academy of Engineering, president and chairman of the Association of the United States Army, chairman of the Aerospace Industries Association, and chairman of the Defense Science Board. A former president of both the American Institute of Aeronautics and Astronautics and the Boy Scouts of America, his many honors include the National Medal of Technology presented by the President of the United States, and the Joint Chiefs of Staff Distinguished Public Service Award. He has received the Department of Defense’s highest civilian decoration, the Distinguished Civilian Service Award, five times.

A former member of Princeton’s Board of Trustees and a current member of its Department of Mechanical and Aerospace Engineering Advisory Council, he holds 35 honorary degrees and was named one of “Fifty Great Americans” by the Library of Congress.

Meg Augustine, who came to the United States from Sweden when she was 19, has served as president of Polaris USA, a fashion eyeglass firm, and as head of Regards!, a stationery retail business. She has long championed advanced medical research and STEM (Science Technology Engineering and Math) education for elementary and junior high school students.

“We’re both very interested in education, and you tend to be drawn towards the organizations and the universities that can make the biggest impact,” she said. “I don’t think you can find any other place in the world like Princeton. There is some magic here that you don’t find anywhere else.”