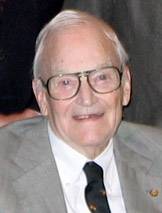 Courtland Perkins, a pioneer of modern aircraft stability and control, gifted teacher and international leader in the field of engineering, died Jan. 6. He was 95.

Perkins joined the Princeton faculty in 1945 as part of a fledgling aeronautical engineering group and led the department in becoming the foremost in the nation in his quarter century as its chair. During leaves from Princeton and after retiring in 1978, Perkins served as chief scientist and undersecretary of the Air Force, chair of NATO's aerospace advisory group and president of the National Academy of Engineering.

In addition to his own research contributions -- his seminal 1949 text on aircraft stability and control is still in print -- Perkins was renowned for his ability to attract the best students and colleagues as well as the resources to support them.

"He not only knew the subject cold, but he really sparked the students' interest and inspired a lot of us to pursue careers in the aerospace industry," said retired NASA engineer Jack Franklin, who earned his Ph.D. from Princeton in 1970 and served as a teaching assistant in Perkins' popular undergraduate course.

"Court was a tremendous influence on my life," Condit said in 1999 when he established a fund for engineering education in Perkins' name. "He was the reason that I attended Princeton."

With his characteristic eye for translating academic research into practical products, Perkins also pushed Condit to leave Princeton after earning his master's degree. "He said, 'You need to go make things.' He was right and is the reason I ended up at Boeing."

Courtland Davis Perkins was born Dec. 27, 1912, in Philadelphia and received his undergraduate degree from Swarthmore College. He earned a master's degree from the Massachusetts Institute of Technology in 1941 and went to work at Wright Field, the legendary U.S. Army Air Corps testing ground for flight technology. The hands-on experience Perkins gained as leader of the Air Corps' Stability and Control Unit informed his teaching and research for years to come.

Following World War II, in 1945, Perkins joined the Princeton faculty as an associate professor and was promoted within a year to full professor. In 1949, with Wright Field colleague Robert Hage, he published a book, "Airplane Performance, Stability and Control," which became the standard text in the field and remains in print.

"During the war, as airplanes became faster and more powerful, problems that hadn't shown up in the past suddenly became apparent," said professor emeritus Howard "Pat" Curtiss, who earned his Ph.D. from Princeton in 1965 and joined the department faculty the same year.

The Perkins-Hage text provided a rigorous and practical guide for controlling the performance and stability of aircraft. "His work on evaluating the handling characteristics of modern airplanes put the entire field of flight testing on a sound engineering basis for the first time," said Alexander Smits, the current chair of the Department of Mechanical and Aerospace Engineering.

In 1951, Perkins became chair of the Department of Aeronautical Engineering and quickly demonstrated a talent for inspiring and managing strong-willed colleagues. "As far as handling a disparate and sometimes prickly group of faculty members, he was magnificent," said David Hazen, who earned his bachelor's and master's degrees from the department in 1948 and 1949, respectively, and stayed on to become a faculty member.

And when it came to raising money, Hazen said, Perkins "could charm the back fillings out of anybody."

"Court was a wonderful chairman," said professor emeritus Sau-Hai "Harvey" Lam. "Everybody -- the faculty, the students and the staff -- loved him."

In growing the department, Perkins built on the pioneering work of his predecessor as chair, Daniel Sayre, who played a pivotal role in developing research facilities on Princeton's Forrestal Campus. Under Perkins, members of the department built world-class wind tunnel and propulsion labs, while Perkins himself built a flight test facility, complete with airplanes, a hangar and a runway.

Perkins, an avid pilot, was known for rigging instruments to airplanes to obtain in-flight data that were nearly impossible for other academic researchers to obtain. In some cases, the tests pushed the limits of safety. Hazen recalled one experiment that involved altering the tail of a Navion airplane to make it marginally stable. In addition, a pipe with a lead weight was installed, allowing him to shift the center of gravity in flight. "They were able to make it just stable enough to take off and then shift the weight when they were flying," Hazen said.

"He had the plane instrumented in all kinds of ways. He had the original idea to do sophisticated tests with a relatively cheap airplane."

Beyond his hands-on work, Perkins cultivated contacts in all areas of the aerospace industry and developed a reputation for knowing and predicting emerging areas of research. Each year he gave a state-of-the-profession talk that drew on his knowledge and served as an inspiration to colleagues and students.

"It was really a tour-de-force presentation," said Franklin.

Perkins also used his knowledge to great effect in the classroom. "He was a marvelous teacher," said Hazen. "He made sure you knew what was going on but he made it fascinating because he was able to tell firsthand stories. The effect was magical."

Perkins took a leave of absence in 1956 and 1957 to serve as chief scientist for the Air Force and then returned to Washington in 1961 for two years as assistant secretary of the Air Force for research and development.

His other government service included membership on the Space Sciences Board for National Aeronautics and Space Administration (1965-70) and the Central Intelligence Agency's Intelligence Review Board (1986-88). He also chaired NATO's advisory group for aeronautical research and development (1963-67).

After stepping down from his chairmanship in 1974, Perkins served for a year as associate dean of engineering. He became professor of aerospace and mechanical sciences emeritus in 1978 and left Princeton to take on the presidency of the National Academy of Engineering, where he served until 1983.

Princeton awarded Perkins an honorary degree in 2001. In 2004, he received the Daniel Guggenheim Medal, the highest honor in aviation, whose first recipient was Orville Wright in 1929.

Memorial gifts may be made to benefit the Department of Mechanical and Aerospace Engineering. Checks should be made payable to Princeton University and note "for Courtland Perkins Memorial Fund" in the memo line or cover letter. Gifts can be sent to the Courtland Perkins Memorial Fund, Princeton University, c/o Helen Hardy, Alumni and Donor Records, P.O. Box 5357, Princeton, NJ 08543-5357.