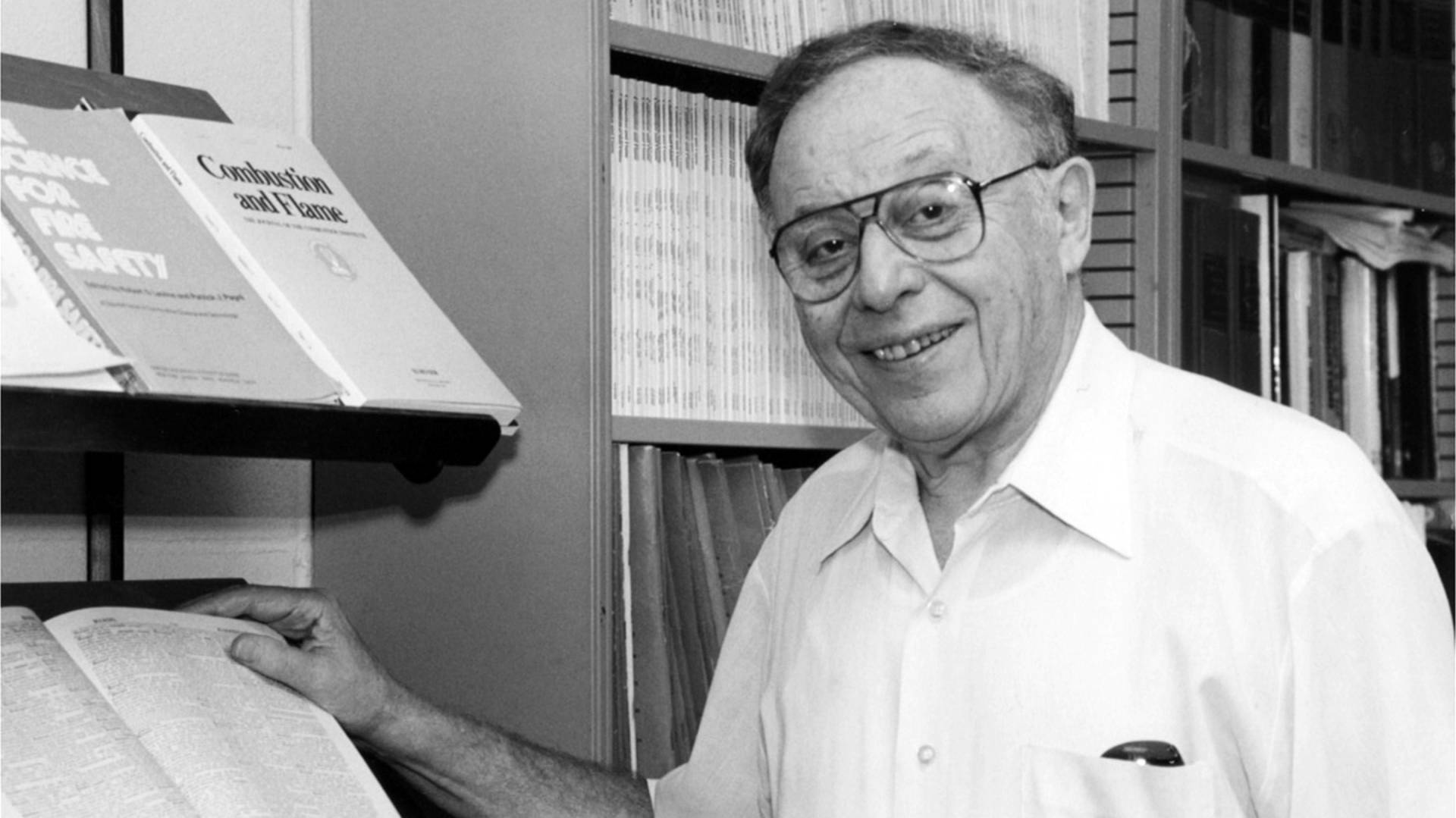 Irvin Glassman, a leading authority on combustion and propulsion who served on the Princeton faculty for 49 years, died Dec. 14, 2019, at his home in Princeton. He was 96.

Glassman, the Robert H. Goddard Professor of Mechanical and Aerospace Engineering, Emeritus, was affectionately known among colleagues and former students as the “Grand Old Man of Combustion.” Besides teaching at Princeton and other universities, he was an adviser to NASA, the National Institute of Standards and Technology, the State of New Jersey, and many industries, notably United Technologies Corporation.

“If future historians were to write the impact of chemical propulsion and fundamental combustion on humanity in the second half of the 20th century, Professor Glassman would be the singular person who represents the coming of age of the discipline, particularly the robustness of combustion chemistry,” said Chung Law, the Robert H. Goddard Professor of Mechanical and Aerospace Engineering at Princeton.

Glassman joined the Princeton faculty as an assistant professor in 1950 and was promoted to full professor in 1964. He was appointed to the Goddard professorship in 1988 and elected to the National Academy of Engineering in 1996. A founder of Princeton’s Center for Energy and Environmental Studies and the journal Combustion Science and Technology, Glassman was the author of 250 scholarly articles and two books including the standard text “Combustion.” A fellow of the American Institute of Aeronautics and Astronautics and the New York Academy of Sciences, Glassman transferred to emeritus status at Princeton in 1999. He received an honorary degree from Princeton in 2009.

In 2018, Glassman was awarded the Daniel Guggenheim Medal for his contribution to the fields of combustion and propulsion. The medal was established in 1929 to honor innovators who make notable achievements in the advancement of aeronautics. Its first recipient was Orville Wright. The medal is jointly sponsored by the American Institute of Aeronautics and Astronautics, American Society of Mechanical Engineers, SAE International (originally the Society of Automotive Engineers) and the Vertical Flight Society (originally the American Helicopter Society).

Princeton celebrated Glassman’s achievement at a reception on Aug. 18, 2018.

“Irv, the legacy you built here at Princeton lives on in the strength of the MAE [mechanical and aerospace engineering] department and, indeed, the larger School of Engineering and Applied Science,” Emily Carter, then dean of engineering, said at the event. Carter, who was also a faculty member in mechanical and aerospace engineering, is now the executive vice chancellor and provost of the University of California Los Angeles.

“As dean, I speak for all of your SEAS colleagues in saying congratulations and thanks for all you did for Princeton and indeed for the world,” she said.

In a letter supporting Glassman’s nomination for the Guggenheim Medal, Robert Santoro, the George L. Guillet Professor of Mechanical Engineering Emeritus at Pennsylvania State University, praised Glassman’s scientific contributions as well as his role as a teacher, adviser and mentor.

“A measure of his impact is that 21 of the 35 of his graduate students awarded Ph.D.s were or are faculty members at major universities,” Santoro noted. “At least two in that group, like Professor Glassman, have been elected to the National Academy of Engineering. In addition, five of his former research staff also now hold faculty positions and I am proud to be one of them,” Santoro said.

“He is widely recognized as an inspirational faculty member devoted to the teaching of fundamentals — and doing so in a manner that instills fascination in his students and the application of basic knowledge,” said Norman Augustine, retired chairman and chief executive officer of Lockheed Martin Corporation, who received bachelor’s and master’s degrees from Princeton in aeronautical engineering.

Glassman is survived by his wife of 68 years, Beverly Wolfe Glassman, and his three daughters, Shari Powell, Diane Gienger and Barbara Glassman; their husbands, Warren Powell, Edwin Gienger and Arthur Rubin; and six grandchildren, Eddie (Nicole Kennedy) and Megan Gienger, Elyse and Daniel Powell, and Maya and Noah Rubin. In lieu of flowers, memorial contributions can be made to the Irvin Glassman Fund at the Trustees of Princeton University to support the next generation of Princeton University engineering students (Princeton University, Alumni and Donor Records, P.O. Box 5357, Princeton, NJ 08543-5357).

This obituary includes content from a release from the American Institute of Aeronautics and Astronautics on Glassman receiving the Daniel Guggenheim Medal.

View or share comments on a blog intended to honor Glassman’s life and legacy.