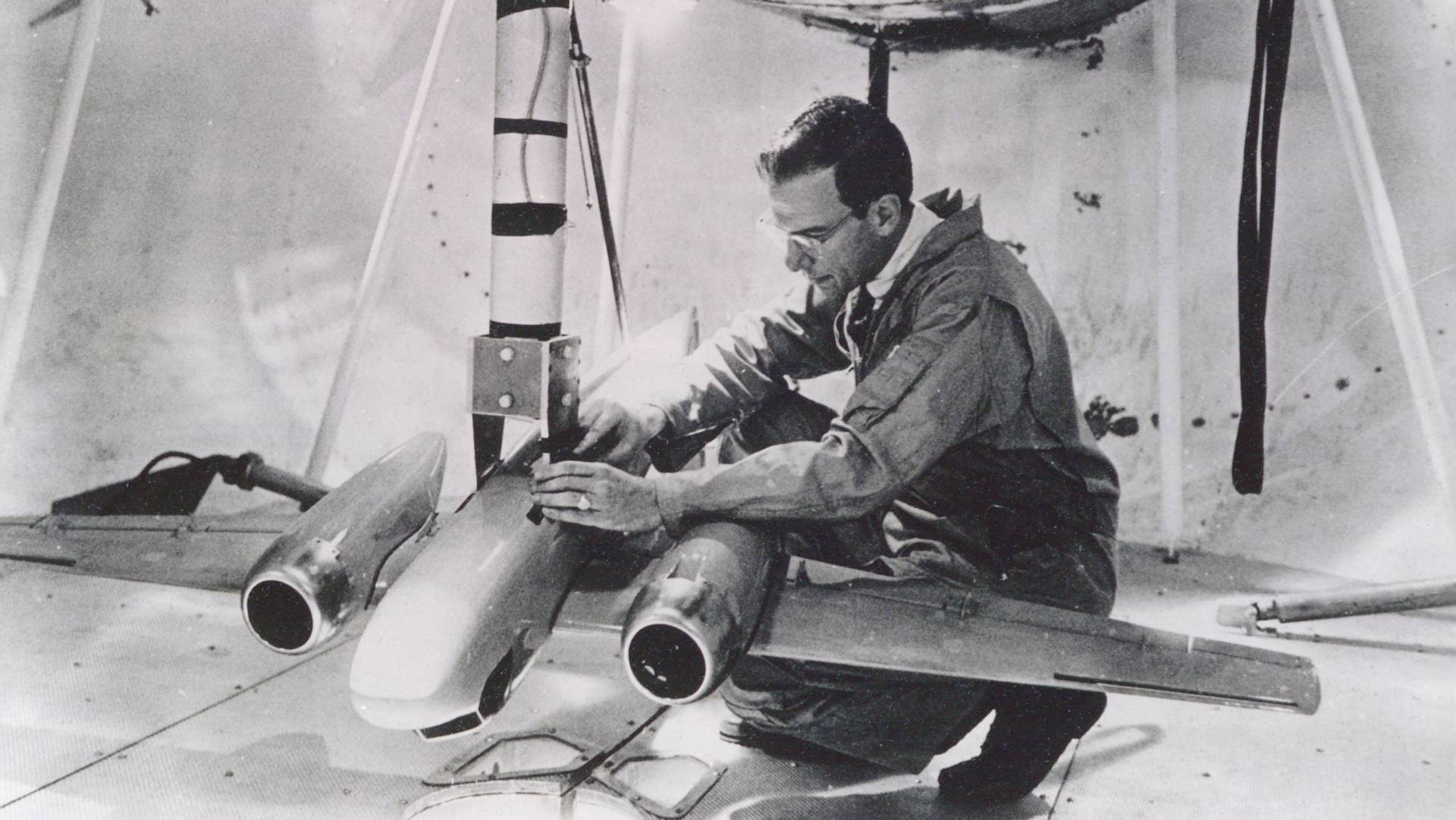 David Hazen works on a model plane to be tested while suspended from a Navy airship at speeds up to 60 mph.

David Comstock Hazen, Princeton alumnus and professor of mechanical and aerospace engineering, emeritus, who received the Navy’s highest civilian honor, died on April 27 at Talbot Hospice House in Easton, Maryland. He was 91. 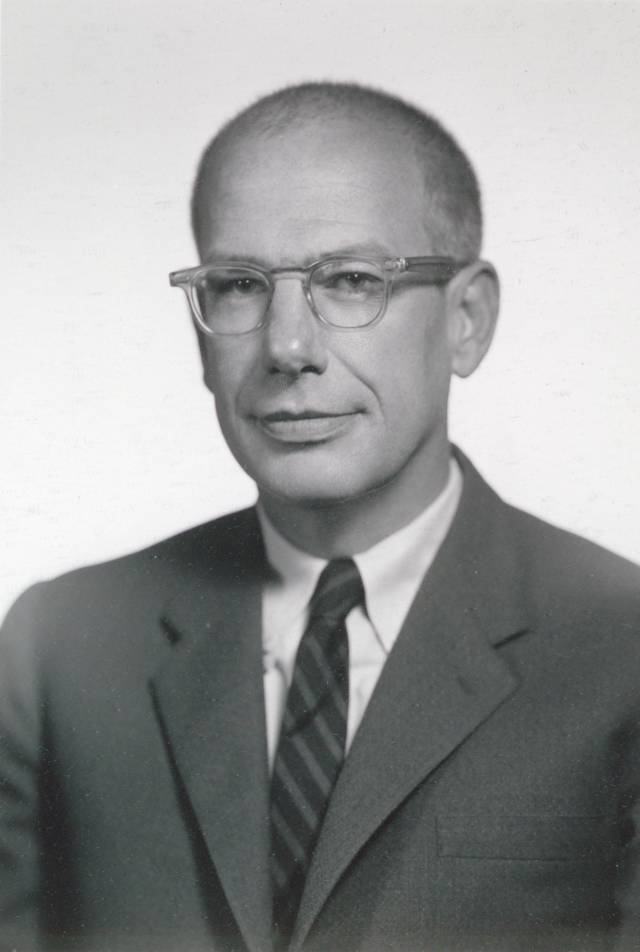 Hazen was an original thinker, working on problems that had far-ranging applicability and fundamental impact. “Some think we’re the slow-flying Beatniks — the non-conformists — of the industry,” he said in 1961 in an interview for the Princeton Alumni Weekly, “but for every advance in [aeronautics at] high speeds new problems spring up in low speeds.”

In an era where the industry was pushing flight faster and higher, his contributions to the research of aeronautical engineering were in the area of low-speed aeronautics and aerodynamics. Hazen’s work helped to optimize aircraft at low speeds to make planes safer to land and forged the way for the shorter runways common today. This allowed airports to be closer to major cities and increased the number of flights per day to take off.

Hazen is remembered by his colleagues and students as a generous teacher and colleague with “a wonderful sense of humor,” said Professor Robert Stengel, who recalled Hazen as being “kind to [him] and helping to establish connections inside and outside the department.”

One former student, Robert Klein, Class of 1978, remembered that “for most of us entering Princeton with enthusiasm about studying aerospace engineering, he helped amplify that enthusiasm.”

Hazen was born on July 3, 1927, in Hastings-on-Hudson, New York. He graduated from Princeton in 1948 and earned his master’s in 1949, when he joined the faculty in the newly formed aeronautical engineering department. He was appointed full professor in 1963. He served as associate dean of the faculty from 1966 to 1969 and was associate chair of the Department of Aerospace and Mechanical Sciences from 1969 to 1974. He transferred to emeritus status in 1982 after 33 years of service.

From 1975 to 1977 at the conclusion of the Vietnam War, Hazen served as chairman of the Naval Research Advisory Committee (NRAC). The committee was formed by Congress in 1946 following World War II. For his work with NRAC, Hazen received the Distinguished Public Service Award and was praised for his “dedication, hard work, and scientific competence and knowledge.”

Throughout his academic life, Hazen was involved with naval research on low-speed flight. Aircraft that travels below Mach 1, or the speed of sound, are considered subsonic. This includes all commercial airliners, helicopters and airships, as well as many military aircraft. The engineering challenge is in attempting to shorten the strip needed for landing and takeoff, which was crucial for naval aircraft housed on aircraft carriers. Beyond military uses, short takeoff and landing (STOL) aircraft are vital for communities that may live in remote areas that may be very hilly or where water landings and takeoffs are necessary. Much of modern aviation owes its lift, takeoff and landing capabilities to innovations on these types of aircraft.

Hazen conducted much of this research in an experimental wind tunnel lab created at Princeton’s Forrestal Campus, as well as with the help of Navy blimps used to suspend model aircraft to test aerodynamics at slow speeds.

In 1971, he served on the seven-member Faculty Advisory Committee to the Trustee Search Committee for the 17th president of Princeton, which conferred the honor to William C. Bowen that same year.

At a symposium commemorating the centennial celebration of engineering at Princeton from 1872-1972, Hazen, the director of the year-long observance said “[…] technology is the only way out of technologically caused problems,” emphasizing the centrality of technology and engineering to the modern age. But, it was also important to Hazen that the school of engineering help society, “develop[ing] a body of people who will go into public service with a firm grounding in technological subjects,” effectively harnessing technology for the service of humanity.

Hazen was a committed teacher. He taught such courses as “Aircraft Structures” for undergraduates and “Aeroelasticity” for graduates. As demonstrated in this archived video at MIT on the concept of boundary layer control, he described fundamental topics with clarity and purpose through vivid demonstration and keen explanation.

Former students remember Hazen fondly. Robert McKillip, Class of 1978, said “Prof. Hazen crossed my path several times, always for the better […]. He found humor in pretty much everything, so you always left from your contact with him with a smile.”

And just as Hazen’s research optimized aircraft, as a teacher, too, he was committed to drawing out the best in his students. Steve Sliwa, Class of 1977, remembers: “Professor Hazen was one of our most interesting faculty members; […] he was an incredible teacher and motivator. He had a knack of somehow getting each of us to reach to our limits and little beyond.”

Hazen was involved in promoting aeronautical engineering education worldwide, and he traveled to Kanpur, India, during academic year 1964-1965. He was part of a delegation from nine American universities designated to help the Indian government establish the Indian Institute of Technology.

He and two of his graduate students helped to found India’s first Department of Aeronautical Engineering, supervising the construction of experimental facilities complete with flight-test laboratories and convening technical staff for the instructional laboratory program. He also assisted in the development of the engineering school at the University of Jordan.

Lighthearted, he used his knowledge for public benefit. In 1967, he participated as a judge for the paper airplane contest held in the Hall of Science as part of the World’s Fair that took place in Flushing Meadow, New York, that year.

He was a member of Phi Beta Kappa, Sigma Xi and the American Institute of Aeronautics and Astronautics.

Memorial contributions in Hazen’s honor may be made to the Naval Airship Association or Delmarva Public Radio, P.O. Box 2596, Salisbury, MD 21802.

View or share comments on a blog intended to honor Hazen’s life and legacy.