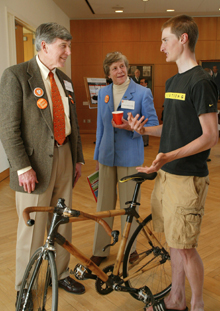 From left, Dennis and Constance Keller admire a high-performance bicycle made from bamboo shown by senior Nick Frey, a mechanical and aerospace engineering major. Student presentations concluded the daylong event celebrating the dedication of the Keller Center for Innovation in Engineering Education. (Photo: Frank Wojciechowski)

Dennis Keller, who graduated from Princeton in 1963 with a degree in economics, and his wife, Constance Templeton Keller, were honored during a dedication ceremony Thursday, April 16, for endowing a center in Princeton's School of Engineering and Applied Science.

The Keller Center for Innovation in Engineering Education is a cross-disciplinary initiative focused on preparing Princeton students to be leaders in an increasingly complex and technology-driven society. Members of the University community gathered to celebrate the naming of the center for the Kellers, who made a $20 million gift last year to support it.

Keller, co-founder and director emeritus of DeVry Inc., one of the largest publicly held higher educational organizations in North America, and the parent organization for DeVry University, said he's learned to appreciate the value of engineering in society and the significance of the problem-solving skills students acquire from studying engineering.

"I've come to see the important role engineering has played in our history and will play in the future of our species," said Keller, who serves on Princeton's Board of Trustees and co-chairs the engineering school's advisory council. "We need the best work in applied science and engineering that the human mind is capable of providing."

The daylong celebration included meetings of advisers of the center and the engineering school, a formal dedication ceremony and a panel discussion with the deans of six engineering schools: Princeton, Yale, Stanford and Tufts universities, the University of Michigan and the Massachusetts Institute of Technology.

The Keller Center dedication was held in the Friend Center for Engineering Education, which was funded by a previous gift from Keller, and named in honor of his friend and classmate, the late Peter Friend. 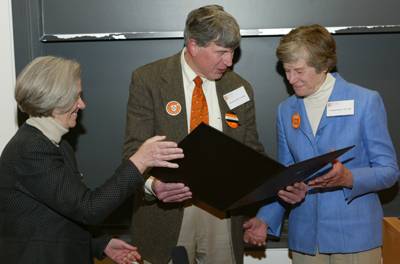 The Kellers look at a framed collage of some of the student projects that the Keller Center has supported, presented to them by President Shirley M. Tilghman during the dedication ceremony. (Photo: Andrea Kane)

"We live in a society where it is increasingly difficult to imagine personal and professional lives that do not have a significant technological component," President Shirley M. Tilghman said at the dedication ceremony. "The Keller Center broadens the understanding of our students -- engineers and non-engineers alike -- of the economic, social and environmental forces that shape, and are shaped by, technology."

The center, which opened in 2005, supports the development of courses and projects that cross conventional academic disciplines to prepare students in engineering, the natural sciences, humanities and social sciences to work side by side to solve global problems.

In his remarks as guest speaker at the dedication, Norman Augustine, a Princeton-educated engineer who served as undersecretary of the Army and as the head of aerospace industry giants Martin Marietta and Lockheed Martin, emphasized the tremendous challenges facing society. He said well-trained engineers will be crucial to addressing problems such as a broken healthcare system, aging infrastructure, increasing demand for energy and growing pressures on the environment. 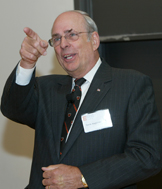 Norman Augustine, who earned his BSE in 1957 and his MSE in 1959 from Princeton, was the guest speaker at the dedication. An industry leader, he stressed the need for well-trained engineers to address the challenges facing society. (Photo: Andrea Kane)

Princeton and other universities have done a good job of training engineers, he said, but the curriculum needs to evolve as the world changes. "As they like to say on Wall Street, past performance is no guarantee of future performance -- and they weren't kidding," he said, drawing laughter from the audience.

H. Vincent Poor, dean of the School of Engineering and Applied Sciences, said the Keller Center has already made strides in making engineering accessible to a wider range of students.

He noted that under the leadership of director Sharad Malik, the George Van Ness Lothrop Professor in Engineering, the Keller Center has expanded the number and visibility of engineering courses available for all students, has helped more students participate in engineering projects outside the classroom -- including international projects -- and has hosted many visitors and guest lecturers.

Malik told the attendees that 60 percent of liberal art majors now take an engineering course during their time at Princeton, and that the valedictorian and salutatorian of the class of 2008 had embodied the cross-disciplinary approach the center hopes to achieve.

The valedictorian, Zachary Squire was a classics major, yet spent his last summer as a researcher in the Center for Mid-Infrared Technologies for Health and the Environment, investigating possible applications of quantum cascade lasers and studying the interaction of scientists and policymakers. The salutatorian, James Morrison, was a chemical engineering major, yet also took classes in a dozen other departments and programs, including a course on the Latin lyric poems of Horace.

"At the Keller Center, we connect engineering students to the world around them through experiential learning both inside and outside the classroom," Malik said. "And we connect students in other disciplines to engineering through courses that touch the essential issues that face society now and into the future, from energy and climate change to high-tech entrepreneurship." 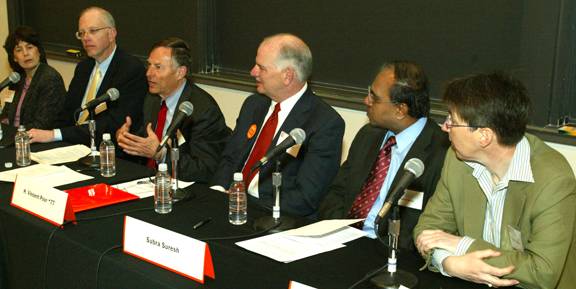 The center's second annual report, which was distributed during the dedication, highlighted several courses the center supports that have attracted students from across the University. These include a hands-on class in optical engineering, a class on alternative energy sources such as wind and solar power, and classes on science writing that help students better communicate complex ideas.

The Keller Center also sponsors "Special Topics in Entrepreneurship," taught by visiting professor John Danner from the University of California-Berkeley's Haas School of Business, and "Harnessing the Power of Entrepreneurship," taught by Julian Lange from Babson College. Both courses are intended to inspire engineering students to consider turning ideas into businesses, as was the center's 2008 "Leadership in a Technological World" lecture series, which brought the heads of technology-based companies to campus to talk about their experiences as high-tech entrepreneurs.

The event concluded with poster displays and presentations by students who received funding from the Keller Center for independent projects, including students who are creating autonomously controlled vehicles and a student making high-performance bicycles from bamboo.