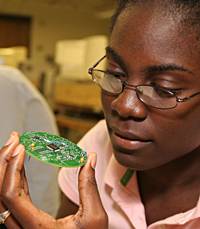 The departments of physics and mathematics collaborated with the engineering school to create an innovative series of courses that integrate all their subjects into a multidisciplinary curriculum for freshman engineers. The courses are an initiative of Princeton's newly created Center for Innovation in Engineering Education. ABOVE: Freshman Nicole Clarke works on an electronic device that will measure the acceleration of a water-propelled rocket. BELOW: Physics graduate student Vassilios Papathanakos (left) helps freshman Liz Brennan with the device. The students expect to build and launch the rocket by the end of November. 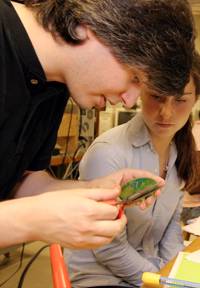 Below left: H. Vincent Poor will serve as the center's first director.

Responding to a national need to rethink the teaching of engineering, Princeton University has created the Center for Innovation in Engineering Education, an initiative to better prepare all students -- both engineers and non-engineers -- to be leaders in an increasingly complex, technology-driven society.

The center is creating new courses and strengthening existing ones that go beyond purely technical subjects to provide students a broader understanding of the global economic, environmental and cultural forces that shape and are shaped by technology. At the same time, the center is improving students' technical education by exposing them to real engineering projects throughout their four years, through internships, entrepreneurial opportunities and multidisciplinary courses.

"Engineering and applied science are going to play a key role in determining what happens to the world during the next 25 years," said Maria Klawe, dean of Princeton's School of Engineering and Applied Science. "The difference between technology that makes the world a better place and technology that creates additional problems will depend on our ability as a society to educate leaders who are well versed in both technical and nontechnical fields."

The creation of the center is one of the key initiatives to emerge from the engineering school's strategic plan, "Engineering for a Better World: The Princeton Vision," which it adopted in May 2004. Poor was appointed director of the center in February 2005, and its first curriculum innovations are starting this fall.

The center's initial projects are to:

• introduce, starting this fall, a freshman curriculum that combines math, physics and hands-on engineering into an integrated series of courses;

• expand the engineering school's already strong offering of interdisciplinary courses that attract humanities majors and other non-engineers; the goal is for more than 90 percent of all Princeton students to take at least one engineering course during their four years;

In all these efforts, the center will seek to attract students from a wide variety of backgrounds and bring an international and interdisciplinary perspective to their education.

William Wulf, president of the National Academy of Engineering, said the center's agenda addresses important issues confronting the U.S. engineering profession, including the need to expose students to real engineering problems in all four years. "If there were one thing I would change in all engineering curricula, it would be exactly that -- giving students more experience with the practice of engineering," Wulf said.

The center's plan to foster connections between engineers and non-engineers also is crucial, Wulf said. "As engineers, we create solutions to human problems. We do it within a set of constraints that are not just issues of size, weight and power consumption. If you ignore the human dimension, you are not going to get as good a solution."

The center's efforts began this fall with the introduction of a course called EMP, which combines engineering, math and physics. In conventional engineering programs, students spend their first year taking required foundational courses that provide little exposure to real engineering problems. The new Princeton course, which involves 10 faculty members from seven departments, addresses the fundamentals in tandem with hands-on projects that show students where their preparations are leading. Labs, for example, deal with problems of energy consumption, robotic sensing and digital image transmission. 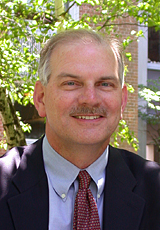 "The idea here is to integrate the subjects so students see the connections," said Poor. "They can transfer something they learned in math to physics, and back and forth. Those ideas will then improve their engineering work, which, coming full circle, will motivate and deepen their understanding of math and physics."

The center is starting from a solid base in its effort to reach beyond students majoring in engineering. With nearly two-thirds of all Princeton students already taking at least one engineering class, a goal of 90 percent is ambitious but attainable once the school introduces more interdisciplinary courses, according to Poor.

"Everyone receiving a first-rate education -- everyone who wants to make a positive difference -- has to understand the technologies that are going to affect the future of the world, as well as the public policy and other societal choices that are to be made in concert with technological developments," he said.

The center also will broaden the education of engineering students by working with businesses to create summer internships, which will expose students to the real applications of their learning and allow them to bring new perspectives back to the classroom.

At the same time, some Princeton engineering classes will adopt more elements of the business world, with a particular focus on invention and entrepreneurship. The center will build on the success of courses such as "High-Tech Entrepreneurship" led by longtime entrepreneur and former Harvard Business School professor Ed Zschau. For example, Daniel Nosenchuck, a professor of mechanical and aerospace engineering, has created a course in which teams of engineering majors and humanities majors will work together to analyze markets and design products, which will be judged and possibly adopted by executives from major consumer products companies.

Taken together, the center's initiatives are intended to advance another major goal: increasing the diversity of engineering students. Among the many cultural barriers and stereotypes that have limited the diversity of the pool of people who chose careers in engineering, a persistent problem has simply been the way engineering is taught, said Klawe. "We lose students who have outstanding technical skills but are not willing to devote their entire educations to the study of technology for its own sake," she said. "These students want to use their skills to make a difference in the world. The Center for Innovation in Engineering Education will help them do that."