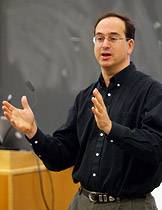 Visiting professor Gordon Bloom is teaching a course this semester titled "A Collaboratory for Social Entrepreneurship," in which students are designing and developing organizations to tackle some of society's biggest challenges. "We're not talking about opportunity discovery, but opportunity creation," Bloom said. (Photo: Frank Wojciechowski)

Watch a video on YouTube of freshman Eden Full, who is using the course to develop a business model for implementing a device she invented while in high school for making solar energy more cost effective in the developing world. As an Ashoka-Lemelson fellow at the Massachusetts Institute of Technology in June, Full gave a talk explaining how her device orients a solar electric panel to face the sun without drawing from the panel's electricity.

The laboratory course taking place in the basement of Princeton's Friend Center is not a traditional one -- in lieu of microscopes, there are discussions of microfinance, and students seek to create not chemical changes, but social ones.

"A Collaboratory for Social Entrepreneurship," which provides an opportunity for undergraduate and graduate students to design and develop social change organizations, is taught by Gordon Bloom, the Dean's Visiting Professor in Entrepreneurship in the Keller Center for Innovation in Engineering Education. Some 75 students are diving into 20 projects that target some of the largest challenges facing society today, including poverty, disease, security and energy.

The course, nicknamed the "SE Lab," was conceived by Bloom during his time on the Stanford University faculty. He then taught it at Harvard University's Kennedy School of Government before he came to the Keller Center at Princeton. Throughout the semester, students explore the theoretical framework of social entrepreneurship through readings, discussions, case studies and guest lectures, while developing their own plans.

One morning in late September, Bloom led the students in an analysis of the problems addressed and social value created by four pioneers of social entrepreneurship, including Nobel Peace Prize-winner Muhammad Yunus, the father of microfinance, and Bill Drayton, founder of Ashoka: Innovators for the Public.

Creating opportunities is exactly what the students, drawn from 16 majors and varied personal backgrounds, are doing in their projects.

Veda Sunassee, a senior majoring in politics who is from Mauritius -- a tiny island nation in the Indian Ocean -- said his interest in the class stemmed from his own nonprofit work. During time off from Princeton in his sophomore year, Sunassee founded the Young Volunteers Association in his native country to promote civic engagement, and last summer he interned at the Ashoka global office in Washington, D.C.

"We have in Professor Bloom a very articulate, experienced and passionate guide and mentor for this class, which in itself is not only an incubator for entrepreneurial and innovative ideas but also a laboratory -- to borrow Professor Bloom's terminology -- to execute the idea," he said.

Engineering school freshman Eden Full was still in high school when she invented a system for rotating solar panels to face the sun without using electricity. She founded a venture, Roseicollis Technologies, to advance the use of the invention to promote sustainable energy collection in developing areas. In the SE Lab, Full is working with four other students to create a business model for implementing the invention in Indonesia.

"In class, we are studying about a lot of other social enterprises and what makes them successful," said Full. "What I have found to be very interesting is that we are actually applying these models to our own projects. It is truly amazing to see so many unique ideas get off the ground."

Other projects range from a garbage-to-methane energy venture in a Karachi, Pakistan, slum to an education innovation effort in Colombia. A number of projects focus on improving human health, including an AIDS and breast cancer initiative in Kenya and a mobile phone-enabled malaria information system in Tanzania. 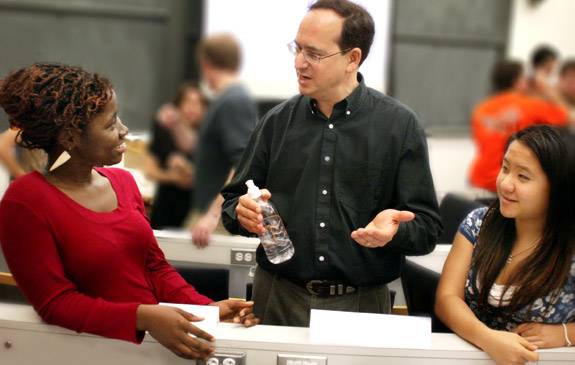 Bloom talks with seniors Fatu Conteh (left) and Kate Hsih during a class session. Some 75 students are diving into 20 projects that target issues including poverty, disease, security and energy. (Photo: Frank Wojciechowski)

"I love the diversity in our class," Full said. "There are students taking economics, engineering, molecular biology and so many other disciplines. Yet we all come together to form these plans to tackle some of the world's largest issues."

Bloom said this process of students joining forces echoes Princeton's Grand Challenges Program for energy, development and health, which links many parts of the University. He also is connecting students to alumni through an environmental initiative with the class of 1976 and a social entrepreneurs competition sponsored by the classes of 1956 and 1981. Reaching beyond Princeton, Bloom and his students have brought in guest speakers, including Iqbal Quadir, the founder of GrameenPhone in Bangladesh and the Massachusetts Institute of Technology's Legatum Center for Development and Entrepreneurship, and Harold Rosen, the founder of the Grassroots Business Fund, a World Bank spinoff that supports business enterprises in developing nations. 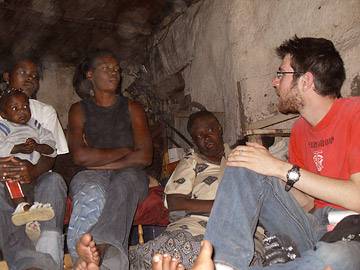 In one of the course projects, junior Daniel Echelman is working with classmates to expand a pilot health education project he started in Kenya. While working with a nonprofit agency near the city of Nakuru in June on HIV/AIDS education, he started a side project to teach people about breast cancer prevention and treatment, which he said is often viewed as a matter of witchcraft rather than medicine. He met with a women's group (above) to discuss science, screening and medical resources related to the disease. (Photo: Julian Tuwei Kiprotich)

In one SE Lab project, Bloom has joined with Wole Soboyejo, professor of mechanical and aerospace engineering, to co-advise four Woodrow Wilson School of Public and International Affairs graduate students conducting a water filtration project in Nigeria.  The students also are investigating possible pilots of the system in their countries of origin -- Pakistan, India, Mexico and El Salvador.

In encouraging students who are eager to effect change, Bloom also seeks to promote changes in higher education.

"My own personal experience was that universities were pretty traditional places and it was difficult to be innovative there," he said. "And students love to be innovative. After my own sense of frustration due to lack of support in launching different projects, I vowed I would try to provide opportunities for students to have ways to turn their visions into reality."

Bloom, who is at Princeton for the 2009-10 academic year, is the third holder of the Dean's Visiting Professorship in Entrepreneurship, which was inaugurated in 2007. His interest in entrepreneurship is informed by his own work in the private and nonprofit sectors in the United States, Europe and Asia as CEO of a medical technology company and an international strategy consultant. 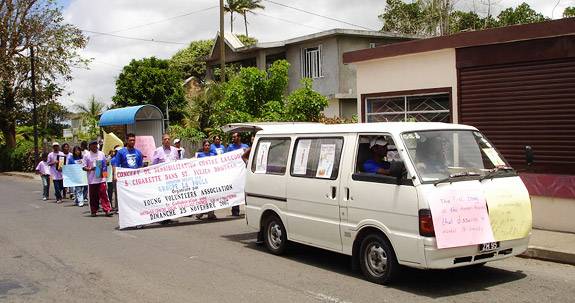 One participant in the course is Veda Sunassee, a senior from the island nation of Mauritius, where he founded the Young Volunteers Association to promote civic engagement. In one project, Sunassee drove a van as the organization campaigned to raise awareness about the dangers of smoking and alcoholism. (Photo: Courtesy of Veda Sunassee)

Bloom praised the Keller Center for its focus on social entrepreneurship and initiative to develop leaders in an increasingly technological world.

"It's part of a big wave of interest in universities in making research and teaching relevant to global problem-solving," he said. "My strong belief is that the students are the engine -- just give them opportunity."

Measuring the success of microfinance