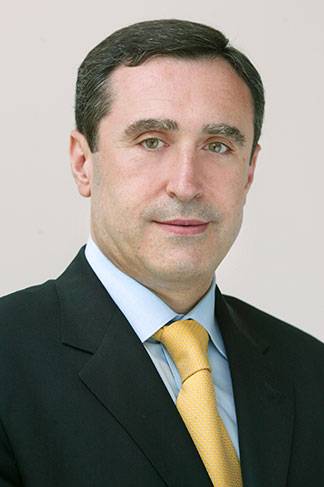 Princeton University emeritus professor Christodoulos "Chris" Floudas, who applied the disciplines of mathematics and chemical engineering to complex systems that include protein folding and fuel refining, died Aug. 14 while vacationing with his family in Greece. He was 56.

Floudas, the Stephen C. Macaleer '63 Professor in Engineering and Applied Science, Emeritus, and professor of chemical and biological engineering, emeritus, joined the Princeton faculty in 1986 and served as a professor for 29 years before moving to Texas A&M University in February 2015. He was director of the Texas A&M Energy Institute and the Erle Nye '59 Chair Professor for Engineering Excellence.

"Princeton Engineering mourns the far-too-early passing of Chris Floudas — an immense loss for the global chemical engineering community," said Dean of Engineering Emily A. Carter, the Gerhard R. Andlinger Professor in Energy and the Environment, and professor of mechanical and aerospace engineering and applied and computational mathematics.

"His exceptional intellectual contributions to chemical engineering will live on through the many students he educated and trained and his written words," Carter said. "What I will remember most is his extraordinary enthusiasm for his research and his always-ready smile."

As a researcher, Floudas employed the discipline of optimization, in which mathematicians find the best solutions among an often-complex array of alternatives to grapple with a wide range of problems. He wrote key papers on the structure of proteins and the behavior of protein fragments called peptides.

In 2012, his research played a key role in a white paper from the American Institute of Chemical Engineers that proposed a method to form a national system to create synthetic fuels. He was the author of two graduate textbooks and co-editor of the 4,600-page Encyclopedia of Optimization. During his career, Floudas was an author of more than 300 scholarly articles. The scientific publisher Thomson Reuters said in multiple years that Floudas' papers ranked in the top 1 percent of those cited in their research fields.

"Chris really was a pioneer of global optimization, which he applied not only to chemical-process systems — such as the optimal design of chemical plants — but also a wide variety of topics such as protein folding and peptide docking," said Richard A. Register, the Eugene Higgins Professor of Chemical and Biological Engineering. "In doing so, he substantially advanced every one of them."

For decades, Floudas taught the University's chemical-process design class, a capstone course for chemical engineering students. Known to be rigorous, the class required teams of students to apply their knowledge to the design of a realistic chemical process.

Register, who was chair of chemical and biological engineering during Floudas' most recent years at Princeton, said that Floudas always developed a new and innovative project for the students rather than relying on older examples. His last class at Princeton developed plans for a refinery to transform a mixture of coal, natural gas and biomass into a liquid transport fuel.

"Chris wanted the students to feel that what they were doing was relevant to the future," Register said.

Athanassios Panagiotopoulos, the Susan Dod Brown Professor of Chemical and Biological Engineering and department chair, said Floudas was known for developing "truly outstanding Ph.D. students," many of whom have emerged as leaders in their field.

"He thought big — in the problems he tackled and the resources he mustered to bear on them," Panagiotopoulos said.

Pablo Debenedetti, Princeton's Dean for Research, said Floudas was an indisputable leader in the theory and numerical methods of global optimization, and their application to chemical-process systems engineering, computational biology and energy-systems optimization. He described Floudas' exceptional scholarly work and ability to train numerous superb students as "a unique intellectual gift."

"He was an extraordinary person and his untimely death is a tragedy that leaves an enormous void in the chemical engineering profession at large, and in the lives of all of us who were privileged to know him well," said Debenedetti, the Class of 1950 Professor in Engineering and Applied Science and professor of chemical and biological engineering.

Yannis Kevrekidis, who collaborated on research projects with Floudas, said he was a trailblazer who defined the frontiers of his discipline.

"More than anything, to me, my friend Christos was a man of principle," said Kevrekidis, the Pomeroy and Betty Perry Smith Professor in Engineering and professor of chemical and biological engineering.

"He would stand for what he believed no matter the consequences in science, at work and in life. He was honest and upfront and consistent — what you saw is what you got," Kevrekidis said. "He was the kind of friend you can count on to stand by you, come what may. In Greek, we call such a person 'a sword.'"

In a statement on his death, the National Academy of Inventors (NAI) said Floudas was a "world-renowned authority in mathematical modeling and the optimization of complex systems."

"His passing is a colossal loss for me personally and for the world which he has so greatly impacted with his prolific work," Nicholas Peppas, a professor of chemical engineering at the University of Texas-Austin, said in the NAI statement.

At Texas A&M, Floudas was instrumental in the growth of the Energy Institute. During his tenure, Texas A&M reported, the university assumed a prominent position in U.S. Department of Energy initiatives in refining and manufacturing. As director, Floudas increased the number of associated faculty from around 70 to more than 245.

"He was an amazing scholar who demonstrated leadership in discovery, in innovative teaching and practice, and in serving his discipline and all of society," Texas A&M University President Michael Young said in a statement.

Floudas was born in Ioannina, Greece, in 1959. He earned an undergraduate degree in chemical engineering from the University of Thessaloniki in 1982, and a Ph.D. in chemical engineering from Carnegie Mellon University in 1986. His research accomplishments earned him numerous awards and honors, including election to the U.S. National Academy of Engineering in 2011, the Academy of Athens in 2015, and the U.S. National Academy of Inventors in 2015. He was a fellow of the American Institute of Chemical Engineers and the Society for Industrial and Applied Mathematics.

Floudas is survived by his wife, Fotini, and their daughter, Ismini. The funeral service is scheduled to take place Aug. 17 in Thessaloniki, Greece. The Department of Chemical and Biological Engineering will schedule a campus memorial service.

Shenk named to the National Academy of Inventors