Photo courtesy of the National Endowment for the Humanities

Princeton University faculty member Elaine Pagels, an authority on the religions of late antiquity and the author of "The Gnostic Gospels" and "Beyond Belief: The Secret Gospel of Thomas," has been named a recipient of the 2015 National Humanities Medal. The announcement was made today by the White House. The medal will be conferred by President Barack Obama at a ceremony at the White House on Sept. 22, which will be webcast live.

The medal honors an individual or organization whose work has deepened the nation's understanding of the human experience, broadened citizens' engagement with history and literature, or helped preserve and expand Americans' access to cultural resources. Pagels was among 12 recipients of the award.

The official citation for the award honored Pagels "for her exploration of faith and its traditions. Through her study of ancient manuscripts and other scholarly work, she has generated new interest and dialogue about our contemporary search for knowledge and meaning."

In addition to Pagels, two other winners of this year's National Humanities Medal have Princeton ties. Isabel Wilkerson, an author and Pulitzer Prize-winning former national correspondent and Chicago bureau chief for The New York Times, was a Ferris Professor of Journalism in 1997-98. Louis Menand, a critic, cultural historian and staff writer for The New Yorker, was a Whitney J. Oates Fellow of the Council of the Humanities at Princeton and guest of the Department of English in 2008-09.

"Through path-breaking research and dedicated teaching, Elaine Pagels has enlivened the study of religion and helped to shed light on the development of Christianity and Gnosticism over many centuries," said Princeton President Christopher L. Eisgruber.

"A gifted writer, scholar and teacher, she has mentored students at all levels — from brand-new undergraduates in her freshman seminar to the most advanced graduate scholars. Elaine embodies many of the core values that define this University, and I am thrilled that she has been recognized with this well-deserved honor," Eisgruber said.

Pagels, the Harrington Spear Paine Foundation Professor of Religion, joined the Princeton faculty in 1982, shortly after receiving a MacArthur Fellowship. Her books bring a fresh perspective to the history of Christianity. "Gnostic Gospels," an examination of the early Christian religious movement called Gnosticism, won the National Book Award and the National Book Critics Circle Award and was selected by the Modern Library as one of the best 100 English-language nonfiction books of the 20th century. "Beyond Belief: The Secret Gospel of Thomas" was a New York Times bestseller and examines the Gospel of Thomas, written around 100 C.E., which was discovered buried in a jar in Egypt in 1945 with other early Christian writings.

Her newest book, "Revelations: Visions, Prophecy and Politics in the Book of Revelation," explores the New Testament Book of Revelation and other Jewish, Christian and pagan books of Revelation written around the same time. Other books include "Reading Judas: The Gospel of Judas and the Shaping of Christianity," co-authored with Karen King, a professor of divinity at Harvard University; "The Origin of Satan"; and "Adam, Eve and the Serpent."

Last year, she taught the freshman seminar "Who Is — Or Was — Jesus?" and a graduate course "Studies in Greco-Roman Religions: Authority, Ritual and Politics in Early Christianity." She has also taught "Christianity: From Illegal Movement to World Religion," "Jesus of Nazareth: Ancient Controversies" and "From Jesus to Constantine," among many other courses. 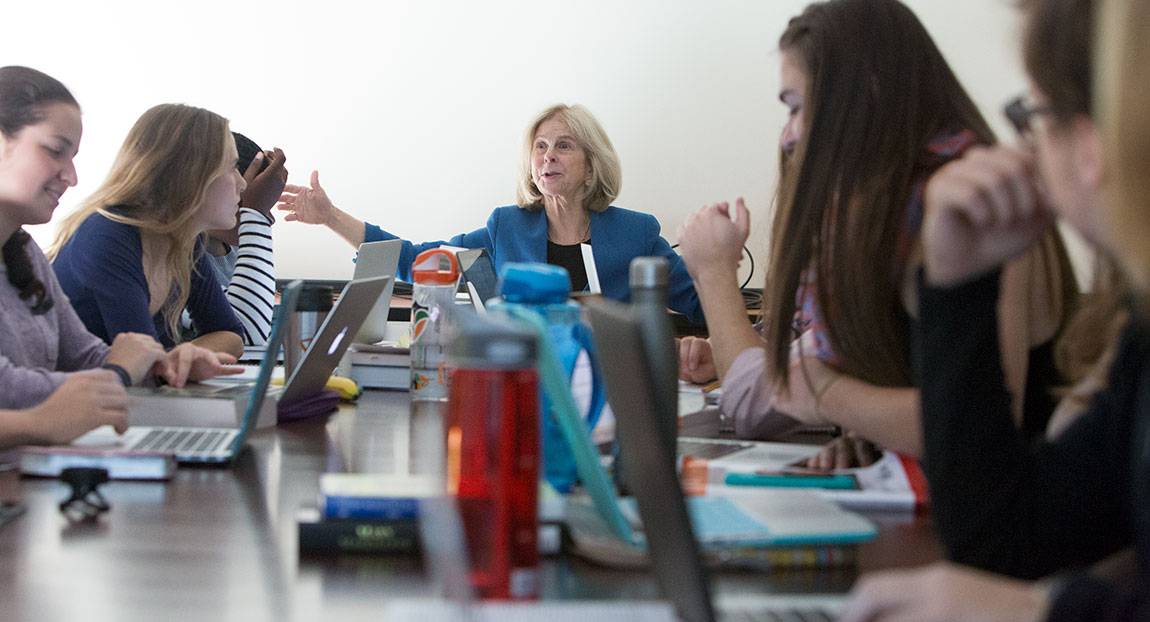 Pagels, the Harrington Spear Paine Foundation Professor of Religion, facilitates a discussion in the freshman seminar "Who Was — or Is — Jesus?" The class examined the life of Jesus using sources that span from ancient texts to contemporary writings, film, music and art. (Photo by Denise Applewhite, Office of Communications)

Prior to coming to Princeton, Pagels was a professor and chair of the Department of Religion at Barnard College, and an associate professor at Columbia University.

Pagels earned her bachelor's in history and master's in classics from Stanford University and her Ph.D. in religion from Harvard. She received Princeton's Howard T. Behrman Award for Distinguished Achievement in the Humanities in 2012. Her other fellowships and awards include a Rockefeller Fellowship, Guggenheim Fellowship and the Centennial Medal for Outstanding Contributions to Society from Harvard.