Forty-six people from 28 countries became citizens of the United States during a naturalization ceremony held Wednesday, April 12, at Princeton University. 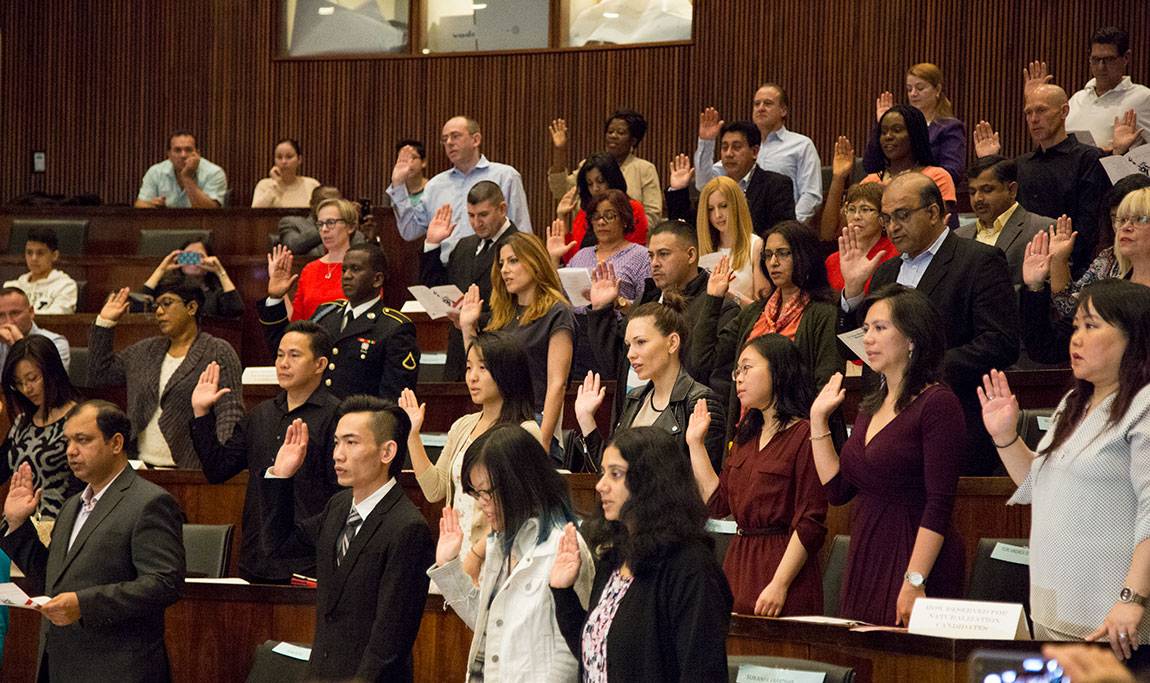 Forty-six people take the Oath of Citizenship during a naturalization ceremony Wednesday, April 12, at Princeton University. The oath was administered by James Thompson, director of the U.S. Citizenship and Immigration Services Newark District. (Photos by Nick Barberio, Office of Communications)

The new citizens live in 27 New Jersey communities and include two members of the University's faculty and one student. Joined by family and friends, the new citizens filled Dodds Auditorium in Robertson Hall for the ceremony.

"I feel admiration for what all of you have accomplished in your lives, gratitude for the perspective and talent that you will bring to our country, and joy at welcoming you as fellow citizens," Eisgruber said.

Eisgruber, a noted constitutional scholar, also spoke about the importance of the citizens' pledge to support and defend the U.S. Constitution, a pledge echoed in the oath he took when he was installed as the University's president. 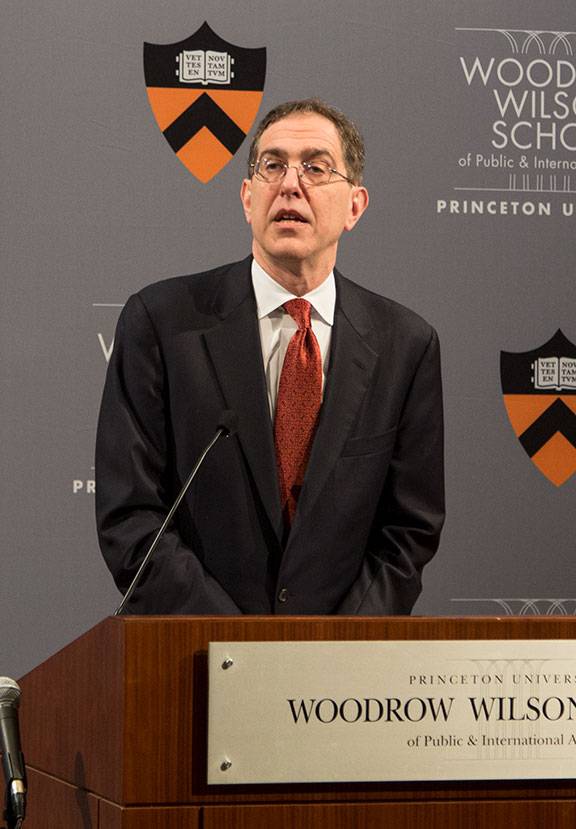 "If you and I are to fulfill our shared promise to support the Constitution, we must dedicate ourselves to the ideals that animate it," he said. "Each of us must be willing to investigate the content and meaning of those ideals. We must challenge ourselves and our fellow citizens to live up to them fully. We must demand that our government strive always to achieve them more completely. That, in my view, is part of what it means to bring about, in the Constitution's words, a 'more perfect union.'"

Following a performance of "The Star-Spangled Banner" by three University staff members and a patriotic film presentation, the Oath of Citizenship was administered by John Thompson, director of the U.S. Citizenship and Immigration Services Newark District. Then, all stood to recite the Pledge of Allegiance.

The new citizens were recognized one by one, receiving certificates and congratulatory handshakes from Thompson, Eisgruber and Princeton Mayor Liz Lempert, to applause from the audience. 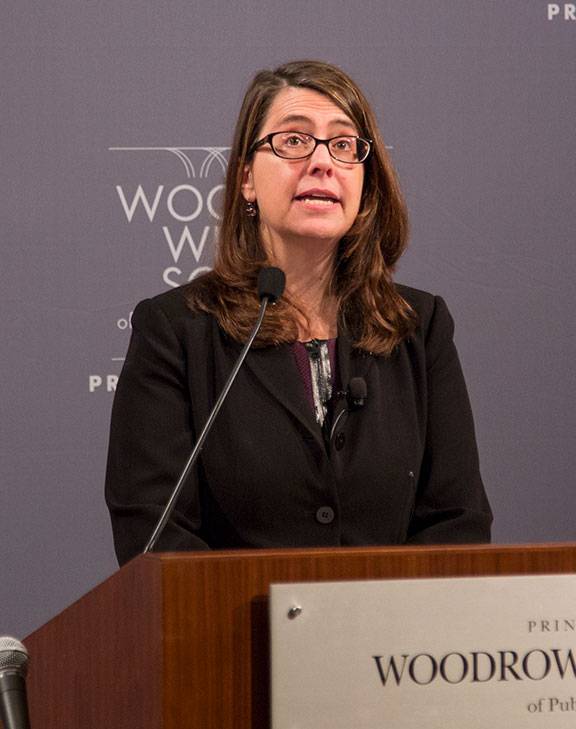 "In broad strokes, your reasons for coming to America are not different than the reasons our forefathers came here in search of freedom, opportunity and a new start," Lempert told the new citizens. "And today, each of your individual stories becomes part of the great American story."

At the conclusion of the ceremony, the new citizens received a standing ovation. Many took time for photos with family and friends and to pose with the American flag.

Each year, between 700,000 and 750,000 new citizens are welcomed at naturalization ceremonies across the United States and around the world. Among the requirements for citizenship are a knowledge of U.S. government and history, the ability to speak, read and write English, and meeting residency requirements. 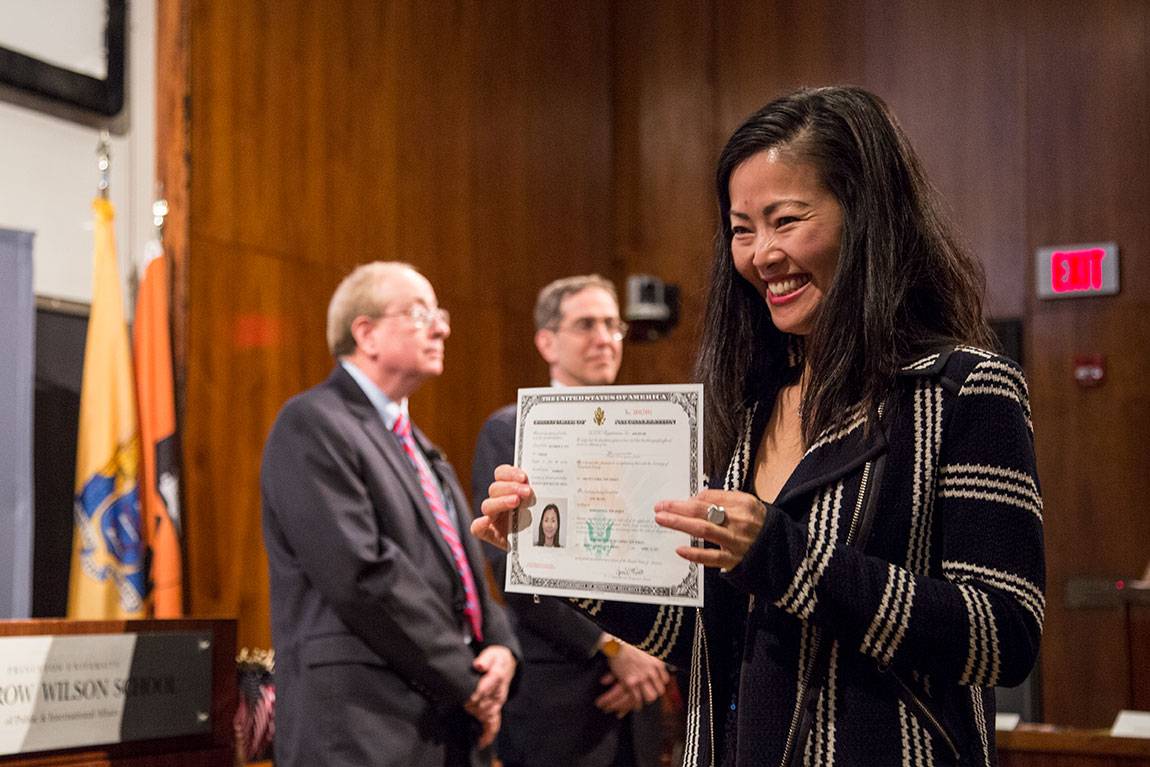 The new citizens were recognized one by one, with each receiving a certificate of naturalization.

At a reception in the Shultz Dining Room followed the ceremony, Cecilia Rouse, dean of the Woodrow Wilson School of Public and International Affairs, read a letter of congratulations from U.S. Rep. Bonnie Watson Coleman and offered her own welcome.

"I want to send my warmest congratulations to you and your families on this phenomenal day," Rouse said. "I'm proud and honored that the Woodrow Wilson School was able to host today's ceremony."