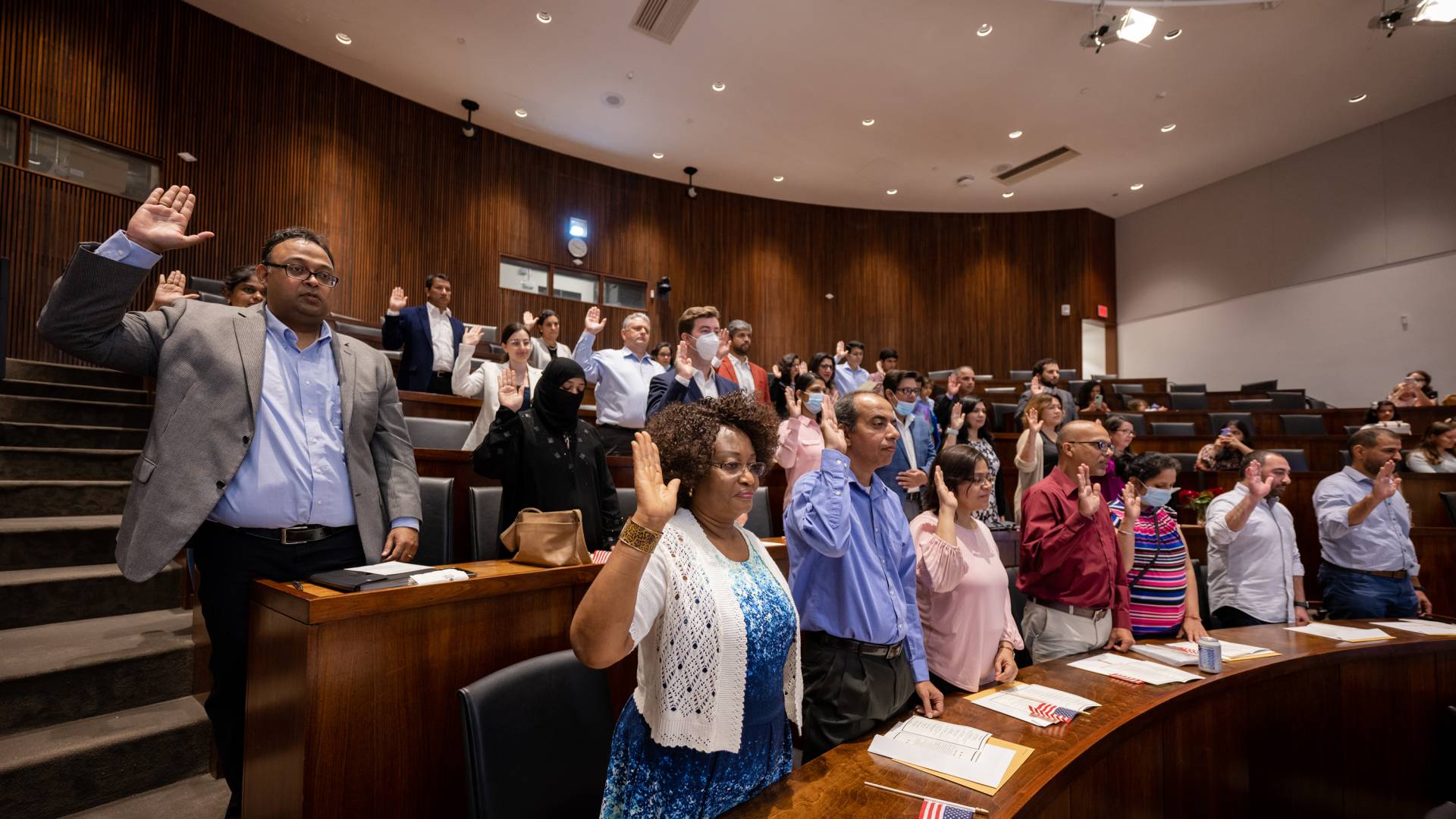 Thirty Princeton-area residents raise their hands as they recite the Oath of Allegiance to become naturalized citizens of the United States on campus Saturday, Sept. 17. In the foreground is Hannah Aryeetey from Ghana, a caregiver who said she was inspired to become a citizen in part to help people. "A lot of people need care, especially the elderly," she said.

Thirty people from 11 countries took the Oath of Allegiance to become naturalized citizens of the United States in a weekend ceremony on campus that celebrated the diversity, freedom and opportunities that abound in a nation where, the keynote speaker said, “there is always hope.”

The new citizens, all Princeton-area residents, took their oath in the Arthur Lewis Auditorium at the School of Public and International Affairs (SPIA).

“The United States has always been committed to and held together by shared values of freedom, liberty and equality,” SPIA Dean Amaney Jamal said in the keynote address Saturday. “I’m proud that these values are also held dear by both Princeton University and the School of Public and International Affairs. Both institutions promote and celebrate diversity in all of its forms, and seek to be a welcoming place for students, faculty and administrators from all over the world.”

Jamal related how her parents came to America as immigrants seeking a better life for her and her siblings. “Both my parents were displaced by wars,” she said. “But they believed in the American Dream, not the romanticized, idealized dream that everything is spectacular and easy. But the American dream that despite the challenges, despite the obstacles, despite the difficulties and hard work, there is always hope in America.” 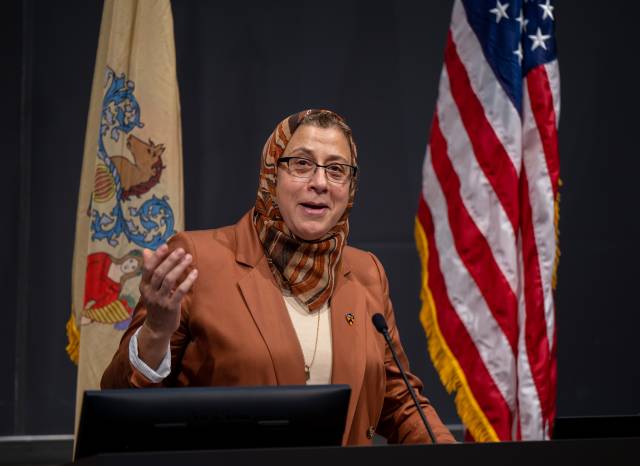 In the keynote address, Amaney Jamal, dean of Princeton's School of Public and International Affairs, told the story of how her parents immigrated to America to offer her and her siblings a better life.

John E. Thompson, Newark district director for U.S. Citizenship and Immigration Services (USCIS), gave the history of the oath, first administered at Valley Forge in 1778 during the American Revolution.

“Although oaths were historically made to declare allegiance to a person, a king, a queen, a feudal lord, the U.S. Oath of Allegiance was always unique because you’re not doing an oath that leads to a person,” Thompson said. “You’re taking an oath to support and defend the Constitution and the laws of the United States.”

The ceremony began with a rendition of Woody Guthrie’s “This Land is Your Land” by the Princeton a cappella group Shere Khan, which also led the audience in singing the U.S. national anthem.

Kristin Appelget, the University’s assistant vice president for community and regional affairs, welcomed the audience. She noted that the event was part of Welcoming Week, an effort by the municipality's human services department and the Princeton Public Library to promote inclusiveness, unity and diversity. 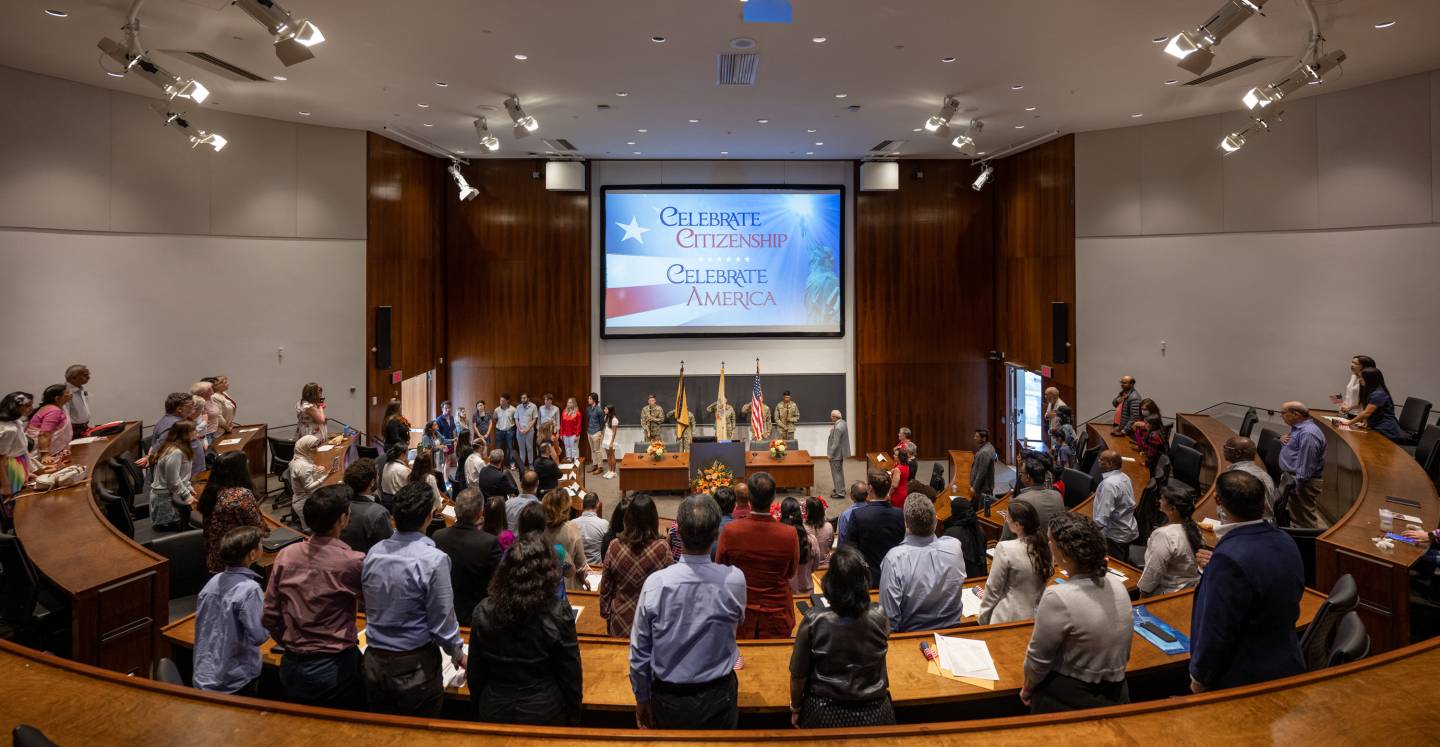 With the Shere Khan a cappella group leading, the audience sings the U.S. national anthem.

An ROTC color guard presented the U.S., New Jersey and Princeton ROTC flags. A video of Lee Greenwood’s “God Bless the U.S.A.” was shown, as was a video greeting from President Joe Biden.

Calling America a great nation of immigrants, Biden praised the new citizens for their courage to uproot their lives and come to a country “that is more than just a place, but an idea, an idea where everyone is created equal and deserves to be treated equally.”

Those taking the oath came from Canada, Egypt, Ghana, Hungary, India, Pakistan, Russia, Spain, Syria, Taiwan and the United Kingdom. In interviews, they expressed a variety of circumstances and reasons for becoming American citizens.

Kamesh and Mahathi Mutyam of India were sworn in while their daughter, Hassini, a student at South Brunswick High School, looked on. Kamesh Mutyam said he came to the U.S. on a visa while doing a project for his company and decided to stay. He now works for Bank of New York Mellon.

Christopher Green said he first came to the United States from Vancouver, British Columbia, as a first-year student in Princeton’s Class of 2012. His wife and classmate, Ariel, attended the ceremony along with their 2-year-old daughter, Eva. Green is now a visiting assistant professor of art history at Swarthmore College.

“It’s hugely special for me to come full circle” to campus for the ceremony, he said.

Claire Bertrand from Scotland, who works at the Princeton Public Library and lives in Princeton with her husband, Al, and their children Eve and James, said she was looking forward to voting. 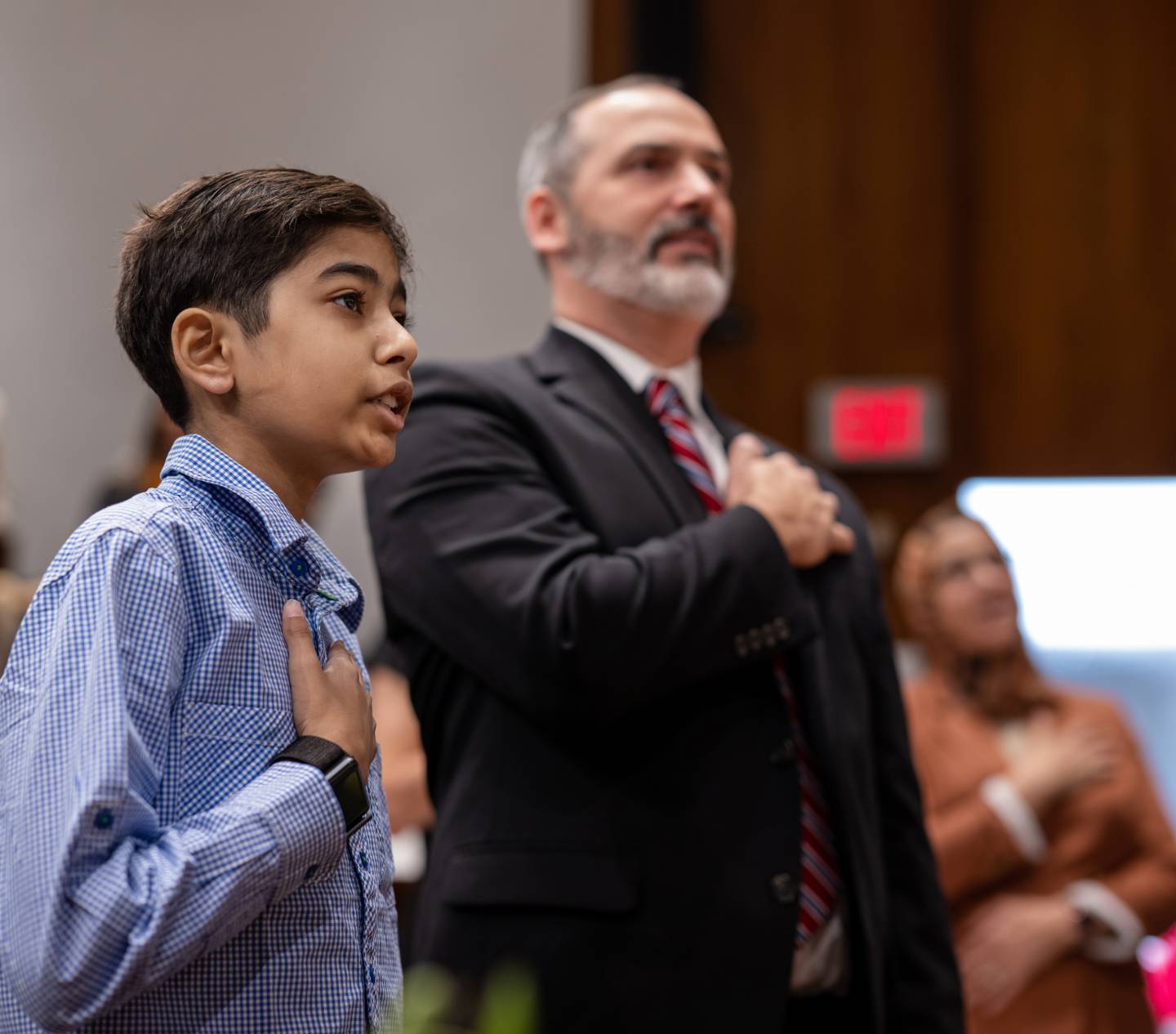 Aarush Tripathi, 13, joins Keith Dorr of U.S. Citizenship and Immigration Services in leading the new citizens and the rest of the audience in the Pledge of Allegiance.

Toward the end of the 40-minute program, Aarush Tripathi, a 13-year-old eighth grader in the West Windsor-Plainsboro school district, was invited by Keith Dorr, USCIS supervisory immigration officer from Mount Laurel, to help lead the audience in the Pledge of Allegiance. Aarush, from India, had just taken the oath with his father, Ashok, and his older brother, Arihant, joining his mother, Nandini, in U.S. citizenship.

“As citizens of the U.S., we are also citizens of the world,” she said. “And as we build bridges of understanding, compassion and empathy, here in the U.S. and abroad, please don’t forget that you are now the stewards of the U.S. And the U.S. is now a stronger and a better place, here and in the world, because of you.”