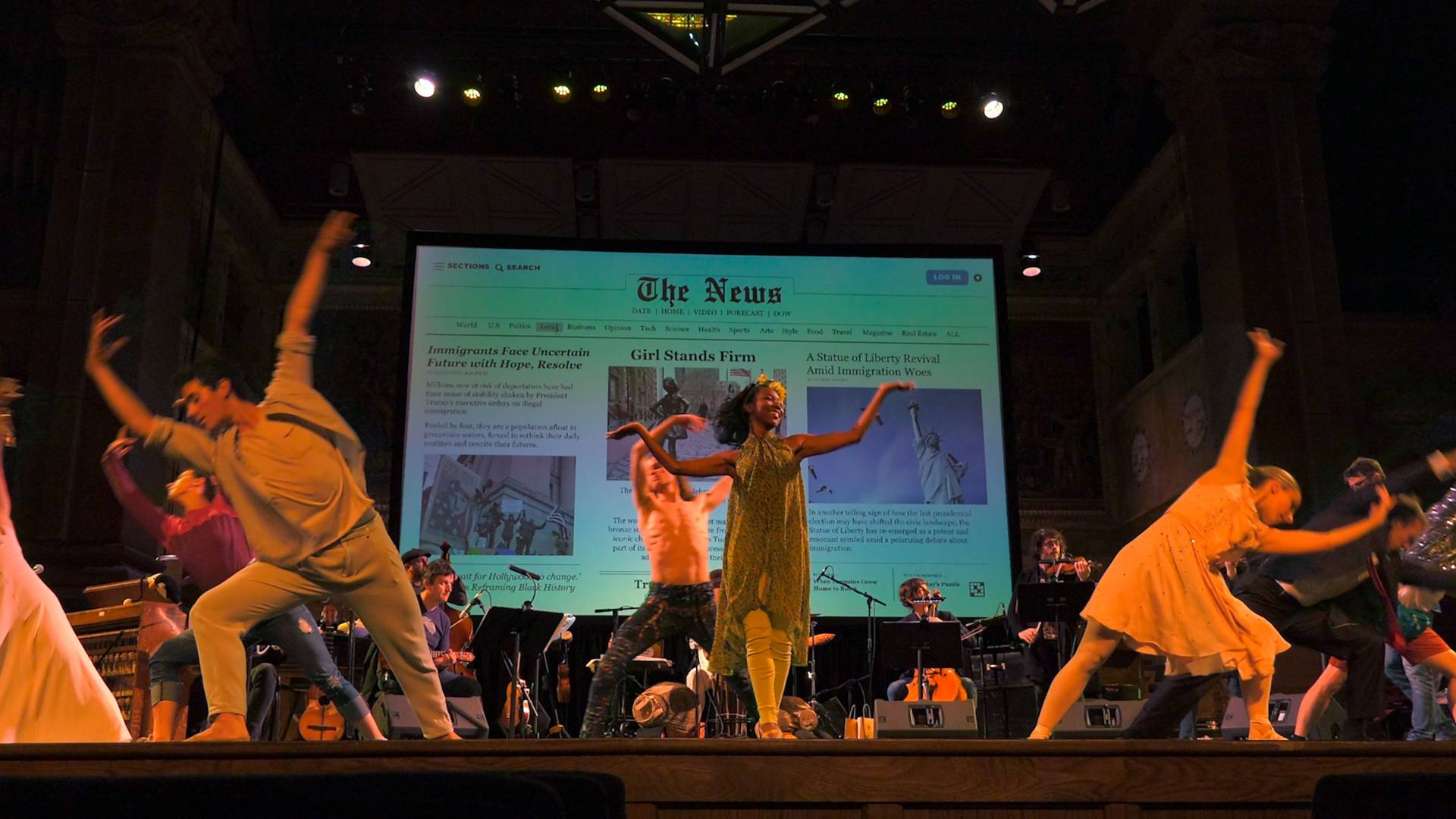 This spring, in a reimagined production of a rarely performed pantomime-ballet, members of Princeton University Ballet explored how the arts can serve as an avenue for political expression. The original 1923 production of "Within the Quota" with music by Cole Porter responded to immigration quotas enacted in 1921; the new production, choreographed by Julia Jansen, of the Class of 2019, updates the original "American stereotype" characters to reflect the current political climate.

From Petipa to Puccini to Shakespeare, classical works of dance, opera and theater are often adapted to contemporary times. This spring at Princeton, a rarely performed pantomime-ballet — "Within the Quota," with music by American composer Cole Porter — was reimagined to reflect the current political climate.

The original 1923 production responded to restrictive immigration quotas based on national origin that were enacted in 1921. Students of the Princeton University Ballet mounted the new production in Richardson Auditorium at Alexander Hall on Thursday, May 4. Porter's music was performed live in a new arrangement prepared by Simon Morrison, professor of music, and the London-based Penguin Cafe, whose 10 members traveled to Princeton for the show.

When he composed the score for "Within the Quota," Porter was an ambitious young songsmith. He was deeply troubled by the Emergency Quota Act of 1921, which slashed immigration into the United States and established strict quotas based on the 1910 census to ensure an unchanging ethnic and religious population. Porter's acerbic 16-minute pantomime-ballet, a series of duets in which an immigrant meets — and dances with — a series of American stereotypes from a New York heiress to a Hollywood starlet, tested the truth of America as a nation of immigrants.

The ballet premiered in Paris by the Ballets Suédois before itself immigrating to the United States. Little of the original production remains, just some photos. Its reimagining, under the directorship of dance historian Morrison with choreography by Julia Jansen, a member of the Class of 2019 and the artistic director of Princeton University Ballet, explores how dance and music can reflect as well as resist the political context.

Jansen, a politics major who performed the updated role of a feminist, formerly the "jazz baby" character, said her choreography intentionally reflects the current political climate.

"The way we've updated 'Within the Quota' is that we've added a political element to every character in the original production, and this element consists of an alteration of the character to reflect a policy issue or political issue which we're facing today, and more specifically, immigration," she said.

Princeton University Ballet member Paige Shaw, a member of the Class of 2017 who has studied ballet for 18 years and danced the role of Lady Liberty, formerly the Hollywood starlet, said the new production resonated with her on several levels.

"This is a really interesting project for me as a history major and historian because we get to look at this ballet, which was basically lost to history and take that original ... production and bring it into the contemporary era," she said.

Morrison — who re-orchestrated the Cole Porter score, which had been stored for decades in an archive at Yale University — noted that the arts at Princeton give students a unique avenue for expression.

"During periods of crisis, the arts really matter. And if you are actually going to make a point, political or otherwise, the arts is the best vehicle for it," he said. "And as I said to the students involved in this production, 'If you can't go for it in this context, making a statement, or actually offering a solution, when can you and in what context can you do that?'"

Swanee Golden, a politics major and member of the Class of 2019, danced the role of the Greenpeace activist in the production. She said that since she was a child, she has expressed herself through dance and this production is especially meaningful for her.

"To have the opportunity to react to the current political times in a method of dance ... supported not only by the University but by an international orchestra is an incredibly amazing opportunity," she said.

The original backdrop for the ballet depicted the front page of a daily newspaper stuffed with satirical headlines gently castigating the culture of the Jazz Age. In preparing new projections for this production, high-school students at the all-girls Stuart Country Day School of the Sacred Heart in Princeton designed the homepage of an online news site that reflects current political debates about cultural divides in the United States.

Princeton University Ballet, in existence since 2008, is the only student-run dance group at Princeton dedicated to the art of contemporary and classical ballet. All members are full-time undergraduates at Princeton and have studied at such institutions as the School of American Ballet, San Francisco Ballet School, the Jacqueline Kennedy Onassis School, Washington Ballet School, the Juilliard School, LINES Ballet School and the National Ballet of Canada.

Penguin Cafe draws from a diverse range of sources, incorporating elements of African, Venezuelan, Brazilian, classical, avant-garde and minimalist music into their work, and using everything from strings, pianos, harmoniums and slide guitars to cuatros, kalimbas, experimental sound loops and mathematical notations as their instruments.

Jansen said she hopes the production will appeal to a wide audience.

"It is a ballet which invites everyone, invites all Americans, invites international students. It's not made for a single group of individuals. It's made for everyone. And that, I think, is the bottom line of the story — is that America, as a society, despite the hardships that we're going through, is a place for everyone, is a place of hope and prosperity. We are not exclusive," she said.