Uwe Reinhardt, one of the nation’s leading health care economists and a beloved Princeton University professor, died Monday, Nov. 13. He was 80. A memorial service will be held at 2 p.m. on April 21, 2018, in the University Chapel. 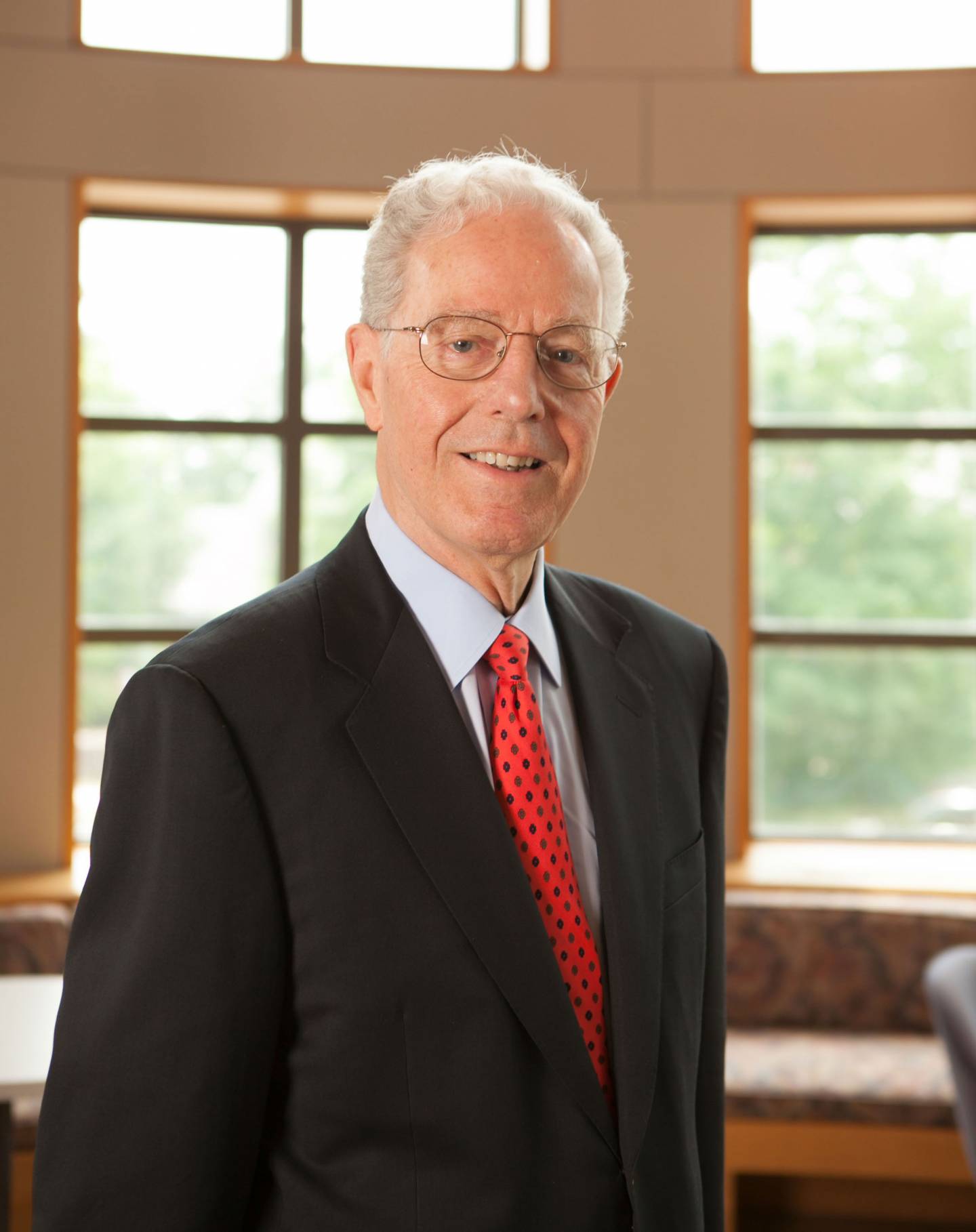 During the nearly 50 years that Reinhardt was at the University, he was regarded as one of the most influential health economists and health policy experts in the country, known for his ability to explain extraordinarily complex health care issues to a very broad audience. Considered “a moral compass for American health care” by the Kaiser Family Foundation, he advised both domestic and international bodies on a number of issues related to health policy.

A charismatic and engaging teacher with a razor-sharp wit, Reinhardt was the James Madison Professor of Political Economy and professor of economics and public affairs at the University’s Woodrow Wilson School of Public and International Affairs.

“Uwe Reinhardt was one of Princeton’s most beloved teachers. He had a lasting impact on generations of students, and we will miss him tremendously,” said Christopher L. Eisgruber, president of Princeton University.

Prominent in health policy circles, Reinhardt’s research spanned a wide spectrum of health policy issues, including equity, cost and cost-effectiveness of health care, payment reforms, veteran’s health care, and the political economy of U.S. health care. He was vocal in his view that high prices, and not excessive quantities of care, are the main driver of rising health care costs in America.

He tied the lack of transparency among health care costs — which he once expressively described as the “shroud of secrecy” draped across America’s “health care fortress” — as a primary reason for market failures in health care. His work was instrumental in advocating some of the reforms embodied in the Affordable Care Act, such as having Medicare pay for performance rather than entirely on a fee-for-service basis.

Reinhardt actively served as an adviser for governments, government commissions and advisory boards. He was routinely called upon to brief members of the U.S. Congress on complex health care issues. He served three consecutive terms, from 1986 to 1995, on the Physician Payment Review Commission, which was established by the U.S. Congress to advise it on issues related to physician payment now part of the Medicare Payment Advisory Commission.

Reinhardt also advised the National Council on Health Care Technology of the U.S. Department of Health, Education and Welfare (now the Department of Health and Human Services) as well as the Special Advisory Board of the Department of Veterans Affairs (VA) and the National Advisory Board of the Agency for Health Care Quality and Research, Department of Health and Human Services (DHHS). Since 2010, he served on the Medicare Technical Advisory Panel of the Centers of Medicare and Medicaid Services at DHHS, which advises the chief actuary of Medicare on making long-range forecast of health spending in Medicare. Reinhardt also served on various advisory panels of the VA and was a member of the National Academy of Medicine, on whose governing council he served in the 1980s.

Reinhardt also was involved in public policy issues abroad, and was a member of the Science and Technology Advisory Group to Premier of Taiwan from 2002 to 2012, advising Taiwan on public policies regarding health, science and technology. In many of these endeavors, Reinhardt worked alongside his wife of a lifetime, Tsung-Mei “May” Cheng, a health policy research analyst at Princeton. Inspired by their son’s service in the United States Marine Corps, they often collaborated on issues and research related to U.S. military policy.

A prolific scholar, Reinhardt took strong stances when it came to health care quandaries. He tackled these issues and more in a regular column he penned for The New York Times’ Economix blog as well as work he published in numerous scientific and policy journals. 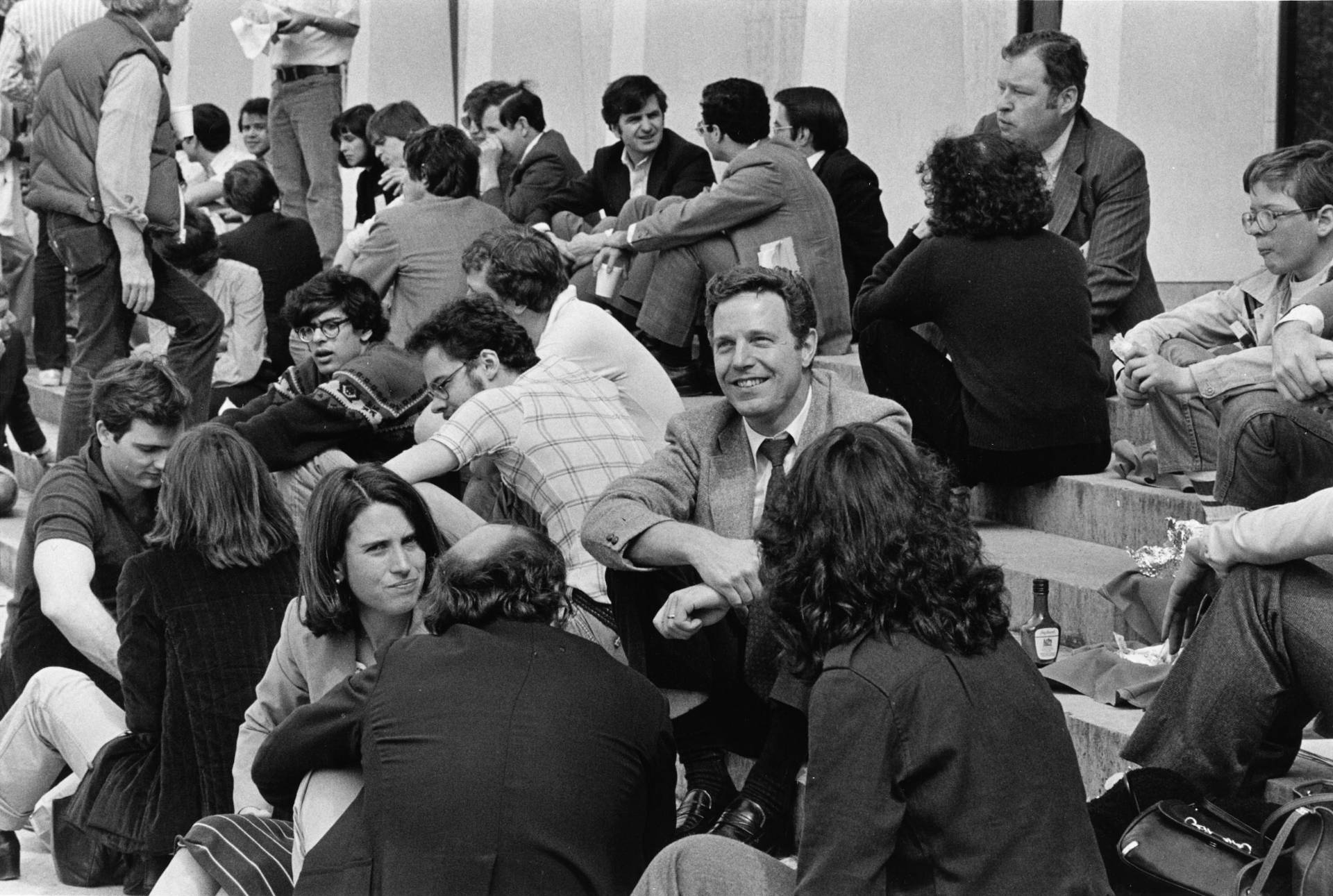 Uwe Reinhardt sits on the stairs of Robertson Hall with policy students early in his career at Princeton.

At Princeton, Reinhardt was known for his teaching and scholarship. He co-directed the Benjamin H. Griswold III, Class of 1933, Center for Economic Policy Studies, formerly known as the Center for Economic Policy Studies, and, for a number of years, he taught Economics 100, which attracted an enrollment of around 300 students each semester. He also taught courses in finance and health policy. He won the Richard E. Quandt Award for Excellence in Undergraduate Teaching by the economics department in 1996.

“Uwe was a consistently popular and entertaining teacher, beloved by generations of students in economics and the Woodrow Wilson School,” said Janet Currie, chair of Princeton’s Department of Economics and the Henry Putnam Professor of Economics and Public Affairs. “He was a kind, warm and humorous colleague who always seemed to have time to stop and chat despite his busy schedule. He will be very sorely missed by his colleagues and former students.”

In his nearly five decades of teaching, Reinhardt influenced thousands of students, many of whom he kept in contact with after they graduated from Princeton. He was named an honorary classmate of the undergraduate classes of 1974, 1983, 1995 and 2000.

Mitch Julis, a graduate of the Class of 1977 and co-founding partner of Los Angeles hedge fund Canyon Capital Advisors, took an accounting class with Reinhardt that still resonates with Julis today.

“Asked once why he taught accounting, he said, ‘In a democracy you need accountability and accounting is one of the surest ways to ensure that.’ That speaks to his values — not only to his students but to his adopted country. He taught with humor, great insight and elegance,” Julis said.

William Frist, a nationally acclaimed heart and lung transplant surgeon and former U.S. Senate majority leader, formed a bond with Reinhardt as a freshman at Princeton in 1970, which bloomed into a 46-year friendship.

“I showed up to Princeton as a kid from Nashville who didn’t know a soul,” Frist said. “Uwe quickly became my mentor. I was just a young student asking a naive question about health policy, but he made it seem like the most important question in the world. We’d talk for hours. I loved his ability to listen.”

Frist described Reinhardt’s approach to teaching as “funny.” In a corporate finance class taught by Reinhardt in the early 1970s, Frist and his fellow students were asked to take the financial reports from the annual report of a specific public company and imaginatively “cook the books” in a way to maximize the profitability and future growth. Reinhardt chose assignments like these to make learning fun, Frist said.

“A week later, when I got the exam book back, in red ink and scribbled across the front, he wrote, ‘You are the #1 SHYSTER.’ When I turned the book over, I saw he gave me an A,” Frist said. “Thus began our decades-long friendship and mentorship.”

Frist and Reinhardt collaborated on writing, teaching and speaking. They also traveled together with their families to South Africa to study health policy and on camping trips in the redwood forests of California. One time, they went on a double date to the Bluebird Café in Nashville to listen to country songwriters, as Reinhardt was a “diehard” country music fan.

At Princeton and afterward, Reinhardt served as influential mentor to Frist. His spirit will live on, Frist said, through the students he affected both in and outside the field of economics.

“Uwe imaginatively captured the minds of generations of students and inspired them to do good,” Frist said. “His content was economics and policy. His engagement was personality and charisma and humility. His product was a better world for us all.”

Over the course of his career, Reinhardt received numerous awards in recognition of his work, including the Bundesverdienstkreuz — the Federal Cross of Merit — by then federal health minister Ulla Schmidt on behalf of the president of the German Federal Republic in 2010, as well as the Presidential Prize from the president of the Republic of China in Taipei, Taiwan, in 2015. In 2016, he was awarded the Gerard Gäfgen Medal by the Deutsche Gesellschaft für Gesundheitsökonomie, or German Association of Health Economics, and, in October this year, he was honored with a Bipartisan Health Policy Leadership Award from the National Alliance of Health Policy, a Washington-based bipartisan health policy organization.

Reinhardt was a trustee of the National Bureau of Economic Research and also served on the Kaiser Family Foundation’s Commission on Medicaid and the Uninsured, and the National Institute of Health Care Management.

He was a senior associate of the Judge Institute for Management of Cambridge University, United Kingdom, and served on the World Bank External Advisory Panel for Health, Population and Nutrition. In October 2006, Reinhardt was appointed by Gov. Jon Corzine of New Jersey to chair the health reform commission for the state.

Throughout his career, he served on the editorial boards of the Journal of the American Medical Association, New England Journal of Medicine, Health Affairs, Health Economics, and the Milbank Memorial Fund Quarterly, among others.

Reinhardt was born in Osnabrück, Germany, and later immigrated to Canada. He earned his bachelor of commerce degree from the University of Saskatchewan in 1964, where he received the Governor’s Gold Medal (valedictorian of the year); and his Ph.D. in economics from Yale University.

Reinhardt is survived by his wife, May (Tsung-Mei Cheng), sons Dirk and Mark (Class of 2001) Reinhardt, daughter Kara Reinhardt Block (Class of 1997), and two grandchildren.

View or share comments on a blog intended to honor Reinhardt's life and legacy.