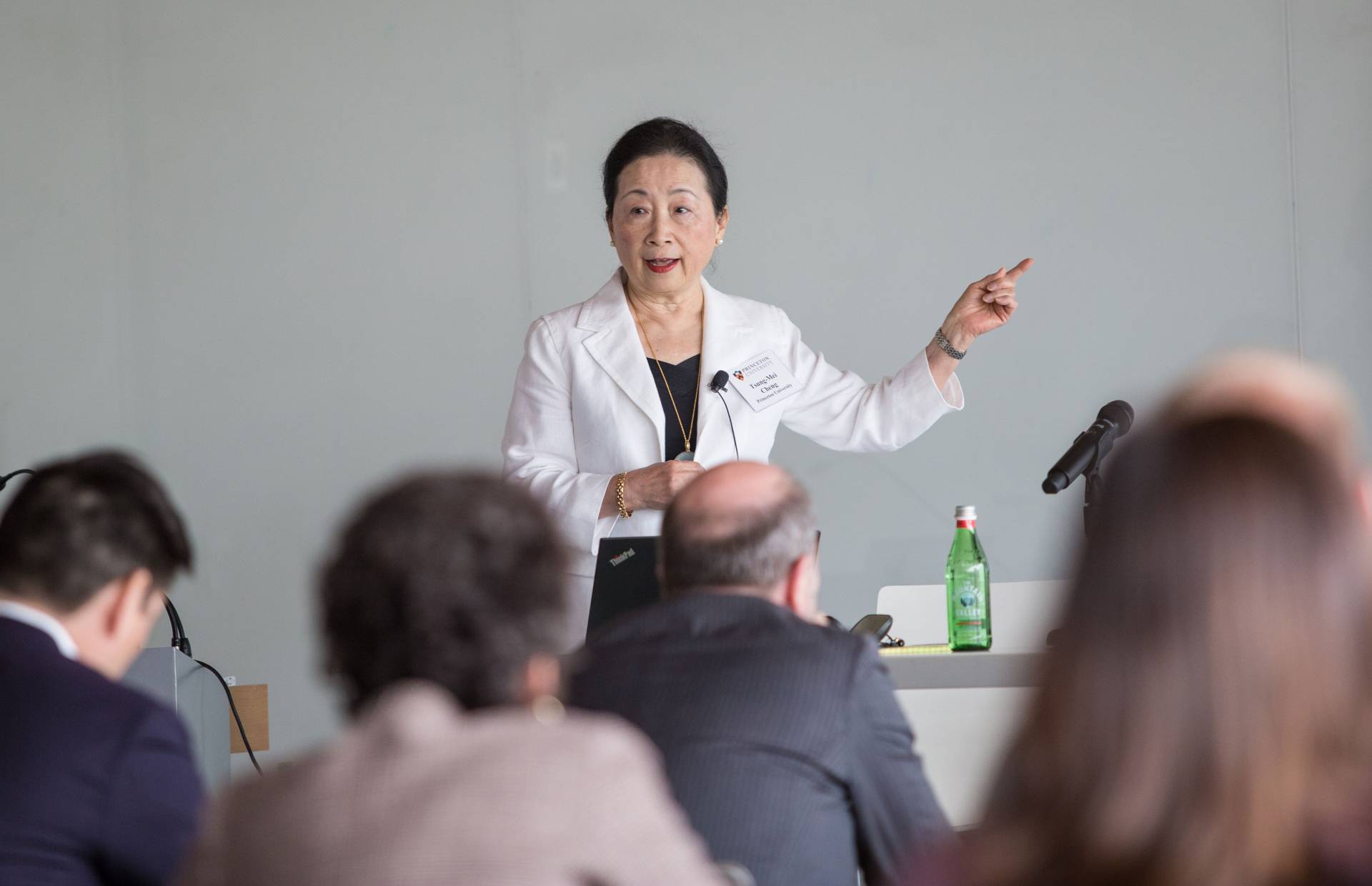 Tsung-Mei Cheng, research scholar, speaks at the conference “Insights In Health Policy,” an event honoring Uwe Reinhardt, the late health policy expert and professor at Princeton. Cheng, Reinhardt's partner in work and life, opened the first panel with a discussion on Taiwan’s adoption of a single-payer system, which she and Reinhardt recommended to the government in 1989, and which was implemented in 1995.

As the United States grapples with the future of the Affordable Care Act (ACA), a group of academics gathered at Princeton University to discuss the future of health care in America.

The conference, held April 11 and 12, covered four health care issues of particular concern to the late Uwe Reinhardt, to whom the conference was dedicated. It was organized by Princeton’s Center for Health and Wellbeing with co-sponsorship from the Griswold Center for Economic Policy Studies and Bendheim Center for Finance, all centers with which Reinhardt was affiliated during his time at Princeton.

A giant in the field of health care policy, Reinhardt spent nearly 50 years at Princeton, most recently as the James Madison Professor of Political Economy and professor of economics at Princeton’s Woodrow Wilson School of Public and International Affairs.

Throughout the event, health care experts from around the country debated what the U.S. could learn from other countries, how prices are driving high health care spending, if major health reform is possible, and the importance of covering the uninsured. It was organized by Princeton’s Center for Health and Wellbeing with co-sponsorship from the Griswold Center for Economic Policy Studies and Bendheim Center for Finance, all centers with which Reinhardt was affiliated during his time at Princeton.

In each panel, an ethical question resurfaced — one deeply embedded in Reinhardt’s work: Does the U.S. have a social obligation to provide care for all? Panelists agreed that answering this question is critical to the success of future health care reforms. And while panelists emphasized an evidence-based approach, they also recognized that, as Jeffrey Clemens of University of California-San Diego said, “Data can’t be the last word on important policy questions. We must keep this in mind for our future work.”

“Uwe said it was immoral for a country as rich as the United States not to cover all of its citizens,” said Janet Currie, the Henry Putnam Professor of Economics and Public Affairs, as she introduced the event. “This was an issue dear to Uwe’s heart, as well as the other topics we’ll discuss today.” 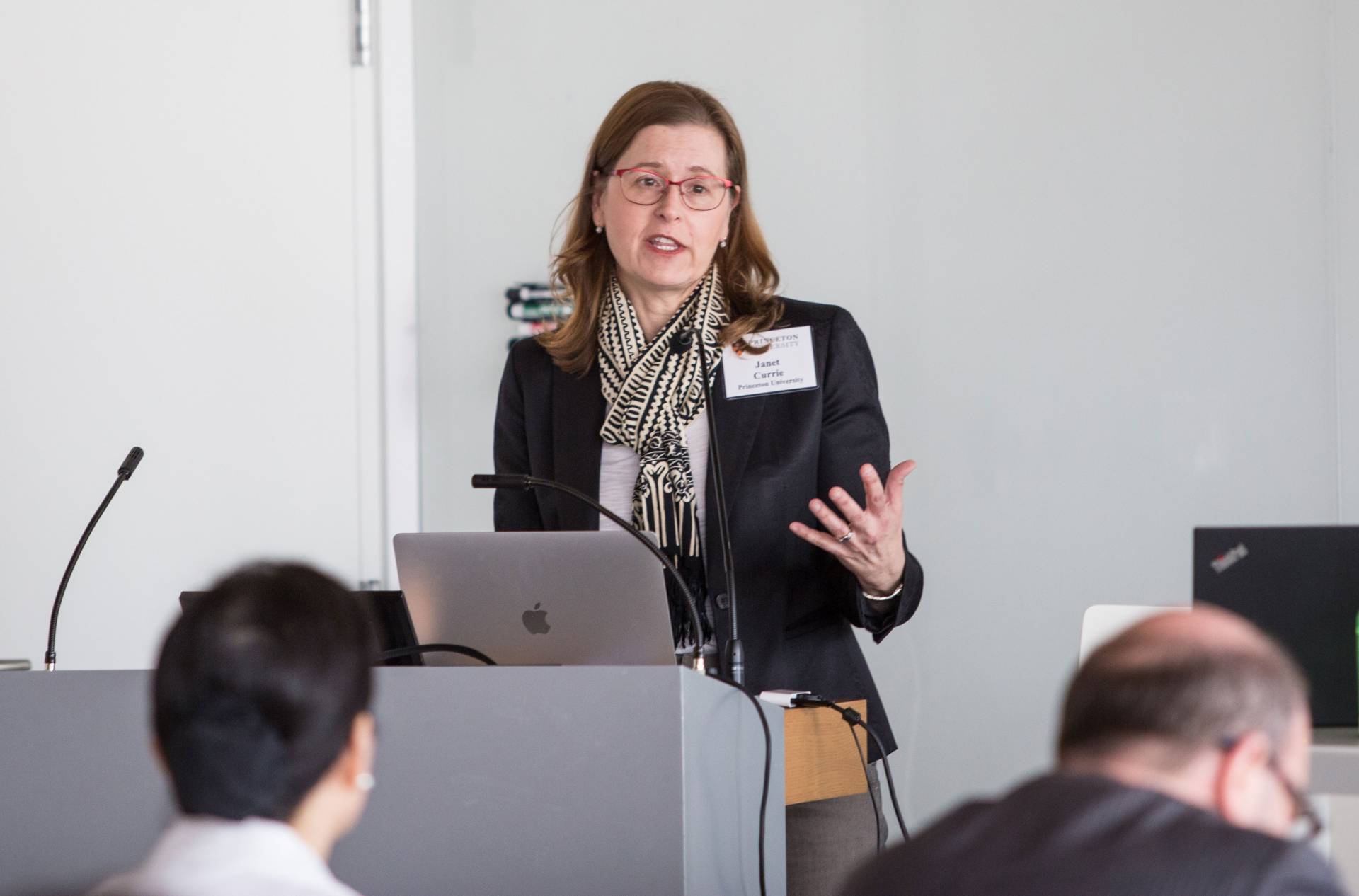 What can the U.S. learn from other countries?

The first panel of the conference compared the U.S. to the health care systems of four other countries: Taiwan, Germany, Canada and Switzerland. Throughout the discussion, panelists agreed that when it comes to reform, the size of the country and health care choices matter, as well as implementation and maintenance. History also plays a role.

Tsung-Mei Cheng, research scholar and Reinhardt’s partner in work and life, opened the first panel with a discussion on Taiwan’s adoption of a single-payer system, which she and Reinhardt recommended to the government in 1989, and which was implemented in 1995. This approach was successful as it provided care for all, controlled costs and remains inexpensive to administer.

“When we made the recommendation of single payer, no one knew what it was. Ever the teacher, Uwe invented another name, calling it the ‘one-pipe system.’ The next day, it was all over the Taiwanese newspapers,” Cheng said. “It remains a very successful and highly popular government program, where 99.99% of people are covered with the same generous benefits package."

Turning to Germany, Reinhard Busse explained how, like the U.S., Germans place an emphasis on choice, utilizing a multi-payer approach that keeps costs low, but forces an overutilization of services. Canada has universal health care for all, but, like the United States, cannot control costs, according to Gregory Marchildron of the University of Toronto. And similar to the U.S., Switzerland has introduced a number of reforms since 1996 tied to government-controlled spending, but absorbing these changes has been difficult, Thomas Zeltner of the University of Bern explained.

The lesson for the United States? Regardless of approach, adopting new health reforms does not come without discomfort or uncertainty, the panelists said. While the U.S. ranks above other countries in terms of health care spending, it, with few exceptions, consumes less health care than citizens in many other rich countries.

“Europeans and Canadians sometimes assume the United States is a complete disaster zone, but the U.S. is a laboratory for trying out new ideas, and this is really important,” Marchildron said. 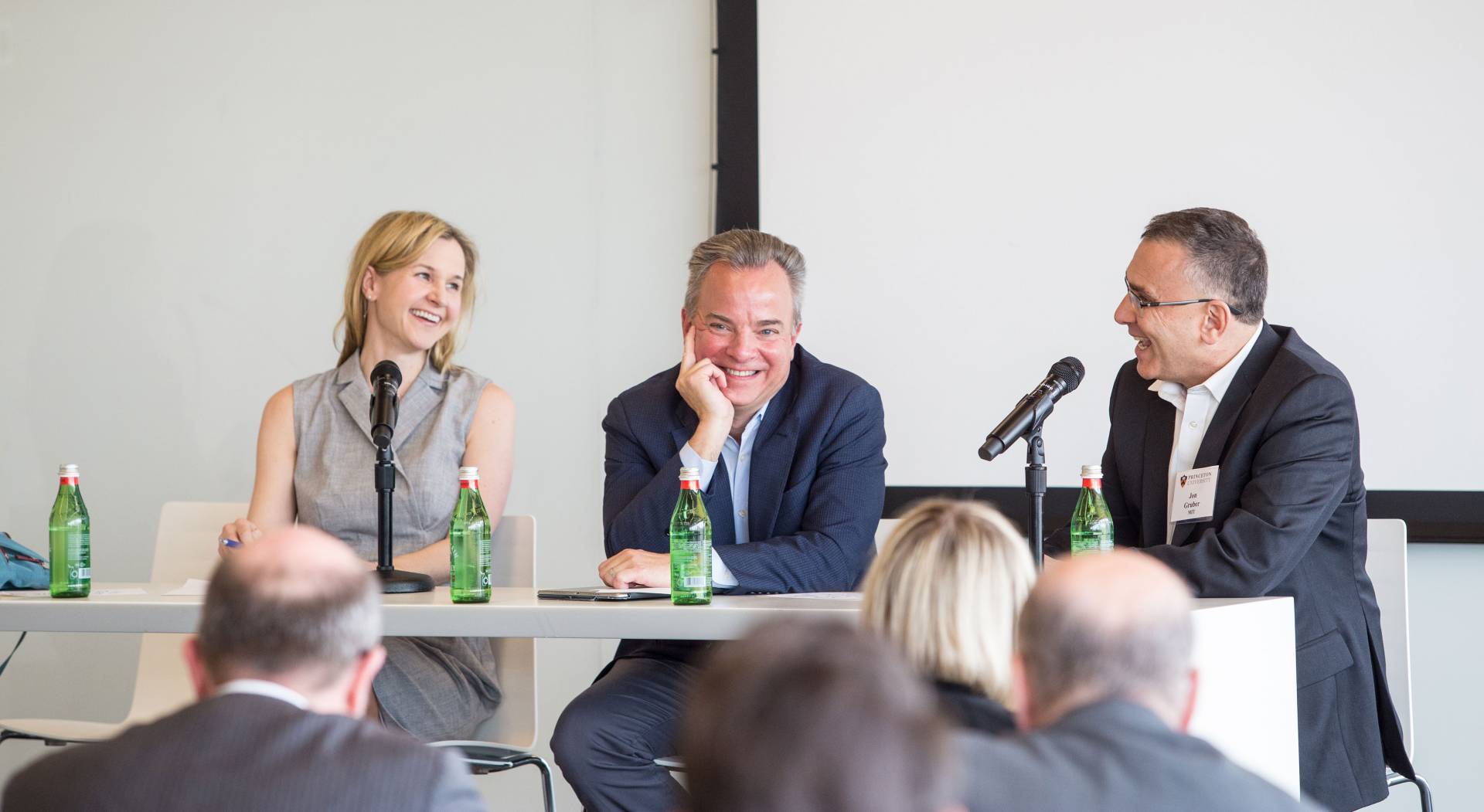 Panelists debate wide-scale health reform in the United States, especially as the country inches closer toward the 2020 presidential election. From left: Ilyana Kuziemko, an economics professor at Princeton; Mark McClellan of Duke University; and Jonathan Gruber of MIT.

One of Reinhardt’s most famous articles, published in Health Affairs, was called “It’s the Prices, Stupid.” In the paper, Reinhardt probed the common finding that the United States spends more on health care than any other country and showed that it is because Americans pay higher prices for care. In fact, they get less care than people in other countries, but pay higher prices for it.

These findings were cited often throughout the second panel of the conference, which featured Clemens, Zack Cooper of Yale University, and Kate Ho of Princeton. As the panelists debated what exactly is driving high health care costs, they also asked: Why is it still the prices?

“Uwe was sensitive to the moral implications of prices, markets and policy,” said panel moderator Austin Frakt of the VA Boston Healthcare System. “This was communicated in many ways. Should the maximum price we pay for health care be the same for all socioeconomic classes, or vary with a person’s ability to pay?”

Panelists highlighted huge variations in prices across markets and the important role of concentration in health care markets in driving that variation.

In Medicare — the health insurance program for the elderly  — Cooper said prices are fixed so cost variation is driven by the amount of services used. Cooper has shown that in contrast, much of the variation in cost in the non-elderly population is driven by differences in prices. Medical innovations have also affected spending, especially given that the U.S. has the most MRI machines and CT scanners in the world, Clemens said. The million-dollar cost of these machines is being folded into the average cost of care. Finally, Ho warned, vertical mergers — alliances between hospitals and doctors and insurers and pharmacies — are affecting prices. Removing an insurer from a choice set often causes premiums to go up.

The by-invitation event, held April 11 and 12, covered four health care issues of particular concern to the late Uwe Reinhardt, to whom the conference was dedicated. It was organized by Princeton’s Center for Health and Wellbeing with co-sponsorship from the Griswold Center for Economic Policy Studies and Bendheim Center for Finance, all centers with which Reinhardt was affiliated during his time at Princeton.

The feasibility of major health care reform in the U.S.

Given the challenges currently plaguing the complex U.S. health care system, is reform even possible? This is the question academics debated in the third panel of the conference, concluding that reform is doable, though not without discomfort.

Catherine Rampell of The Washington Post moderated the discussion. She reminisced about Reinhardt’s columns on economics in The New York Times, and their many “pearls of wisdom.”

One of the major barriers to change is found in American attitudes to current and past health systems, according to Ilyana Kuziemko of Princeton, who also helped organize the conference. She explained that many Americans strongly oppose change, especially those over the age of 65. Kuziemko’s work found that the elderly’s increasing hostility toward universal health coverage is rooted in fears that health care may be redistributed away from them.

“They see universal health care as ‘Medicare for others,’” Kuziemko said. “They already have Medicare and are increasingly against the idea of further government involvement in their health care.”

Jonathan Gruber of MIT, who was an architect of the Affordable Care Act (ACA), argued that further health care reforms are in jeopardy because we do not know how to control costs in ways that are politically feasible. This has caused political turmoil in debates about care.

“It’s a weird tug of war. The left’s loss of faith in markets has boosted a belief in single payer, providing fuel for the GOP to attack the ACA,” Gruber said. “I think we need to follow Uwe’s message here and highlight the need for nondiscriminatory comprehensive coverage. Costs are hard. Coverage is easier.”

Regardless of the issue, the panelists agreed that Reinhardt’s approach to health care was instrumental during each of their periods in government (all three panelists served in the federal government). Reinhardt helped them understand complex policy issues, often in ways that made them laugh.

“We need to keep working on these issues,” said Mark McClellan of Duke University. “Regardless of what happens, we need to have some laughs and some fun along the way and keep up optimism about the future.”

Is major reform possible? Perhaps, but not without answering a fundamental question, the panelists said: Do we have a social obligation to insure everyone?

The importance of covering the uninsured

Economists have long documented the benefits of health insurance. Those with insurance are more financially secure and are in better physical and mental health. There is also good evidence that expansions of Medicare and Medicaid, the public health insurance programs for the elderly and for the poor, respectively, have reduced mortality.

This is how the fourth and final panel of the conference opened its debate. Panelists included

Katherine Baicker of the University of Chicago, Amitabh Chandra of Harvard University, Janet Currie of Princeton, and Sherry Glied of New York University. The moderator was Elisabeth Rosenthal of Kaiser Health News.

Currie’s work investigates the effects of health care reform on pregnant women and children. The expansion of Medicaid in the late ’80s and early ’90s provided a natural experiment for this. Her work shows that as adults these cohorts are more likely to graduate from high school, have fewer chronic conditions or hospital visits, and have higher personal incomes. They also report less mental distress.

The facts supporting coverage are there, Baicker argued, but health care in America continues to be driven by income. “As it stands, we live in a world where there are different utilization patterns based on how much money a person has,” she said. “If we are not comfortable with that, then we have to restrict what rich people get and open up the floor for the poor.”

Having public programs pay for care so that everyone receives what the rich get would greatly increase health care costs. Baicker suggested that the U.S. should consider having an “adult conversation” about the trade-offs and resources available given budget constraints.

Chandra agreed, saying that the United States cannot dodge the moral question of coverage. He said Uwe taught him the importance of socializing people about health care, so that they understand what is at stake. Glied noted that information sharing is also critically important for the health insurance enrollment process. “The moment you give people information really matters,” Glied said. “If we believe it is good for people to be insured and that it builds social solidarity, then it is incumbent on us to make it very easy.”

Reinhardt, an educator and health policy expert, believed that health care is a public good, not a private consumption good. Panelists agreed this should be top of mind, especially as the United States enters the 2020 campaign season. Scholars and the public must also remember that, like plumbing systems, quality health care requires constant upkeep.

To learn more about Reinhardt’s work, read his new book, “Priced Out: The Economic and Ethical Costs of American Health Care,” published this month by Princeton University Press.