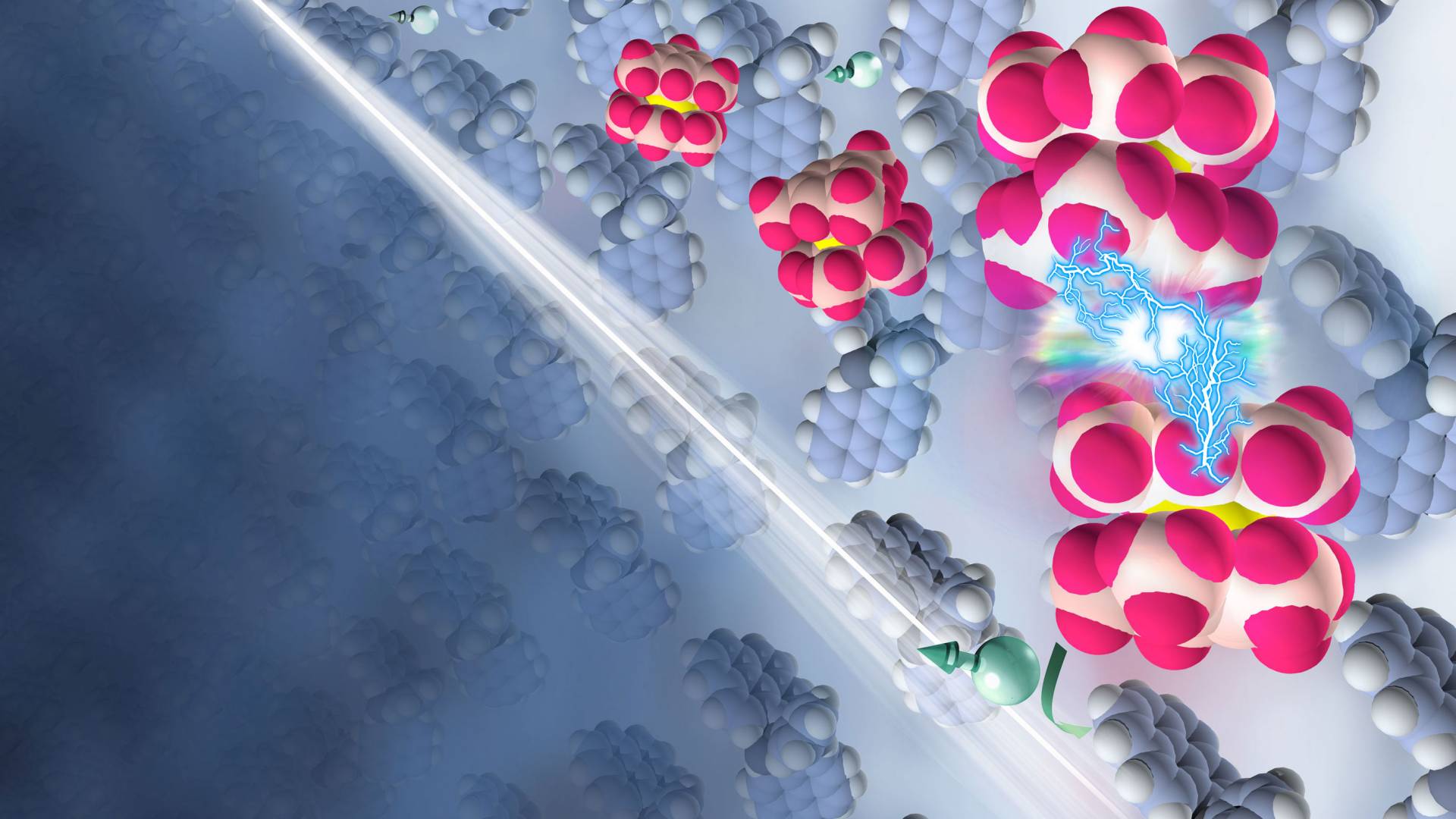 An international team of Princeton and other researchers used ultraviolet light to split molecules (colored white and magenta) that had been added to a semiconductor. The reaction involves transferring an electron (shown with a green arrow) from the added molecule to the semiconductor. This process, called doping, results in a surprisingly stable structure and improves the conductivity of the semiconductor dramatically. The discovery points the way to more widespread use of an advanced technology generally known as organic electronics.

A discovery by an international team of researchers from Princeton University, the Georgia Institute of Technology and Humboldt University in Berlin points the way to more widespread use of an advanced technology generally known as organic electronics.

The research, published Nov. 13 in the journal Nature Materials, focuses on organic semiconductors, a class of materials prized for their applications in emerging technologies such as flexible electronics, solar energy conversion, and high-quality color displays for smartphones and televisions. In the short term, the advance should particularly help with organic light-emitting diodes that operate at high energy to emit colors such as green and blue.

"Organic semiconductors are ideal materials for the fabrication of mechanically flexible devices with energy-saving low-temperature processes," said Xin Lin, a doctoral student in electrical engineering at Princeton and the lead author. "One of their major disadvantages has been their relatively poor electrical conductivity. In some applications, this can lead to difficulties and inefficient devices. We are working on new ways to improve the electrical properties of these organic semiconductors."

Semiconductors, typically made of silicon, are the foundation of modern electronics because engineers can take advantage of their unique properties to control electrical currents. Among many applications, semiconductor devices are used for computing, signal amplification and switching. They are used in energy-saving devices such as light-emitting diodes and devices that convert energy such as solar cells.

Essential to these functionalities is a process called doping, in which the semiconductor's chemical makeup is modified by adding a small amount of chemicals or impurities. By carefully choosing the type and amount of dopant, researchers can alter semiconductors' electronic structure and electrical behavior in a variety of ways.

In their article, the researchers describe a new approach for greatly increasing the conductivity of organic semiconductors, which are formed of carbon-based molecules rather than silicon atoms. The dopant, a ruthenium-containing compound, is a reducing agent, which means it adds electrons to the organic semiconductor as part of the doping process. The addition of the electrons is the key to increasing the semiconductor's conductivity. The compound belongs to a newly introduced class of dopants called dimeric organometallic dopants. Unlike many other powerful reducing agents, these dopants are stable when exposed to air but still work as strong electron donors both in solution and solid state. 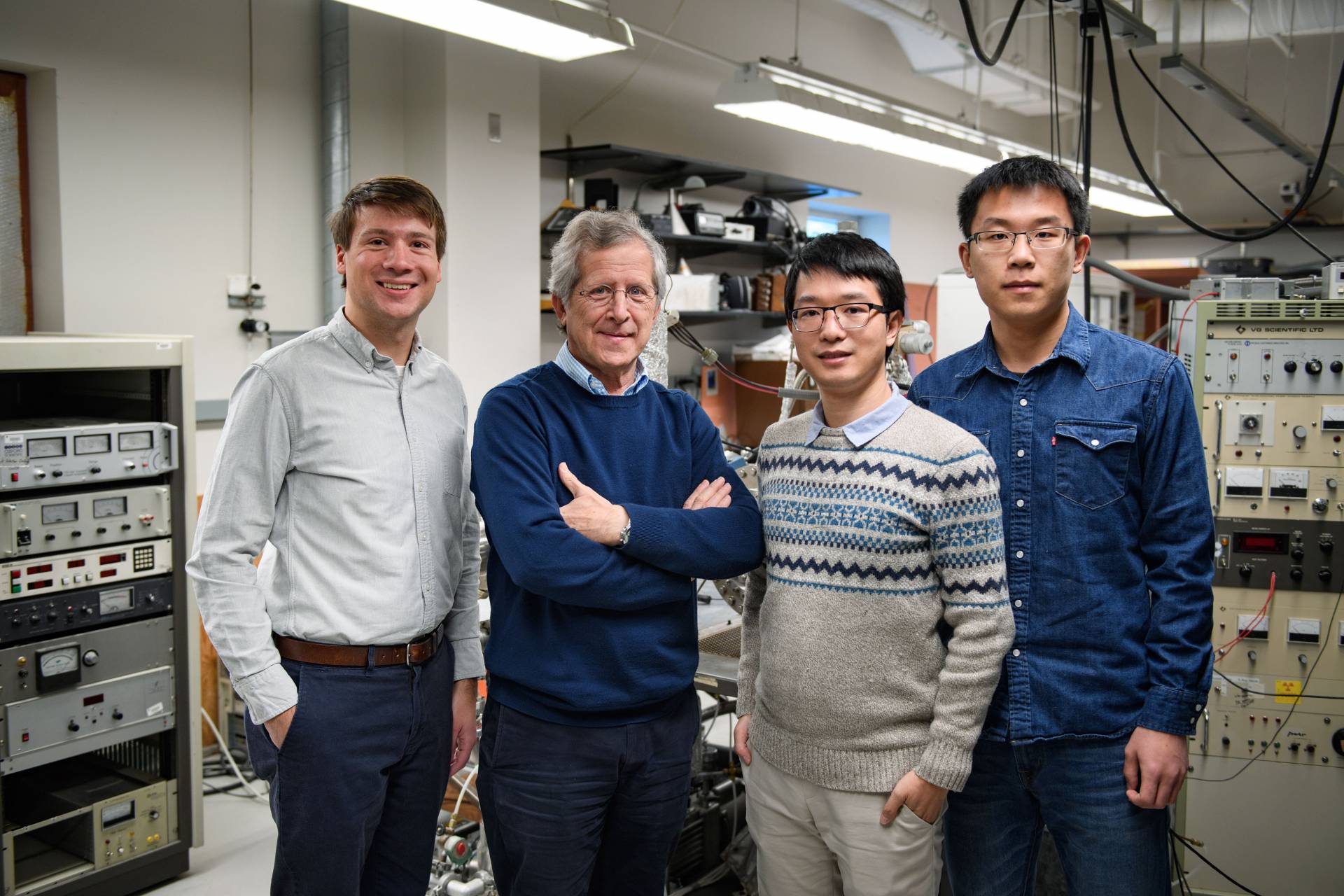 Seth Marder and Stephen Barlow from the Georgia Institute of Technology, who led the development of the new dopant, called the ruthenium compound a "hyper-reducing dopant." They said it is unusual, not only in its combination of electron donation strength and air stability, but in its ability to work with a class of organic semiconductors that have previously been very difficult to dope. In studies conducted at Princeton, the researchers found that the new dopant increased the conductivity of these semiconductors about a million times.

The ruthenium compound is a dimer, which means it consists of two identical molecules, or monomers, connected by a chemical bond. As is, the compound is relatively stable and, when added to these difficult-to-dope semiconductors, it does not react and remains in its equilibrium state. That posed a problem because to increase the conductivity of the organic semiconductor, the ruthenium dimer needs to react with the semiconductor it and then split apart.

Lin said the researchers looked for different ways to break up the ruthenium dimer and activate the doping. Eventually, he and Berthold Wegner, a visiting graduate student from the group of Norbert Koch at Humboldt University, took a hint from how photosynthetic systems work. They irradiated the system with ultraviolet light, which excited molecules in the semiconductor and initiated the reaction. Thus, under exposure to the light, the dimers were able to dope the semiconductor, leading to a roughly 100,000-times increase in the conductivity.

After that, the researchers made an interesting observation.

"Once the light is turned off, one might naively expect the reverse reaction to occur" and the increased conductivity to disappear, Marder said. "However, this is not the case."

The researchers found that the ruthenium monomers remained isolated in the semiconductor — increasing conductivity — even though thermodynamics should return the molecules to their original configuration as dimers.

Antoine Kahn, the Stephen C. Macaleer '63 Professor in Engineering and Applied Science who leads the research team, said the physical layout of the molecules inside the doped semiconductor provides a likely answer to this puzzle. The hypothesis is that the monomers are scattered in the semiconductor in such a way that it is very difficult for them to return to their original configuration and reform the ruthenium dimer. To reform, he said, the monomers must be facing in the correct orientation, but in the mixture they remain askew. So, even though thermodynamics shows that dimers should reform, most never snap back together.

"The question is why aren't these things moving back together into equilibrium," said Kahn. "The answer is they are kinetically trapped."

In fact, the researchers observed the doped semiconductor for over a year and found very little decrease in the electrical conductivity. Also, by observing the material in light-emitting diodes fabricated by the group of Barry Rand, an assistant professor of electrical engineering at Princeton and the Andlinger Center for Energy and the Environment, the researchers discovered that doping was continuously reactivated by the light produced by the device.

The light activates the system more, which leads to more light production and more activation until the system is fully activated, said Marder, the Georgia Power Chair, in Energy Efficiency and Regents Professor of Chemistry. "This alone is a novel and surprising observation."

Other paper's authors include: graduate students Kyung Min Lee, Michael A. Fusella and Fengyu Zhang of Princeton, and Karttikay Moudgil of the Georgia Institute of Technology.

The work was supported in part by the National Science Foundation and the U.S. Department of Energy.