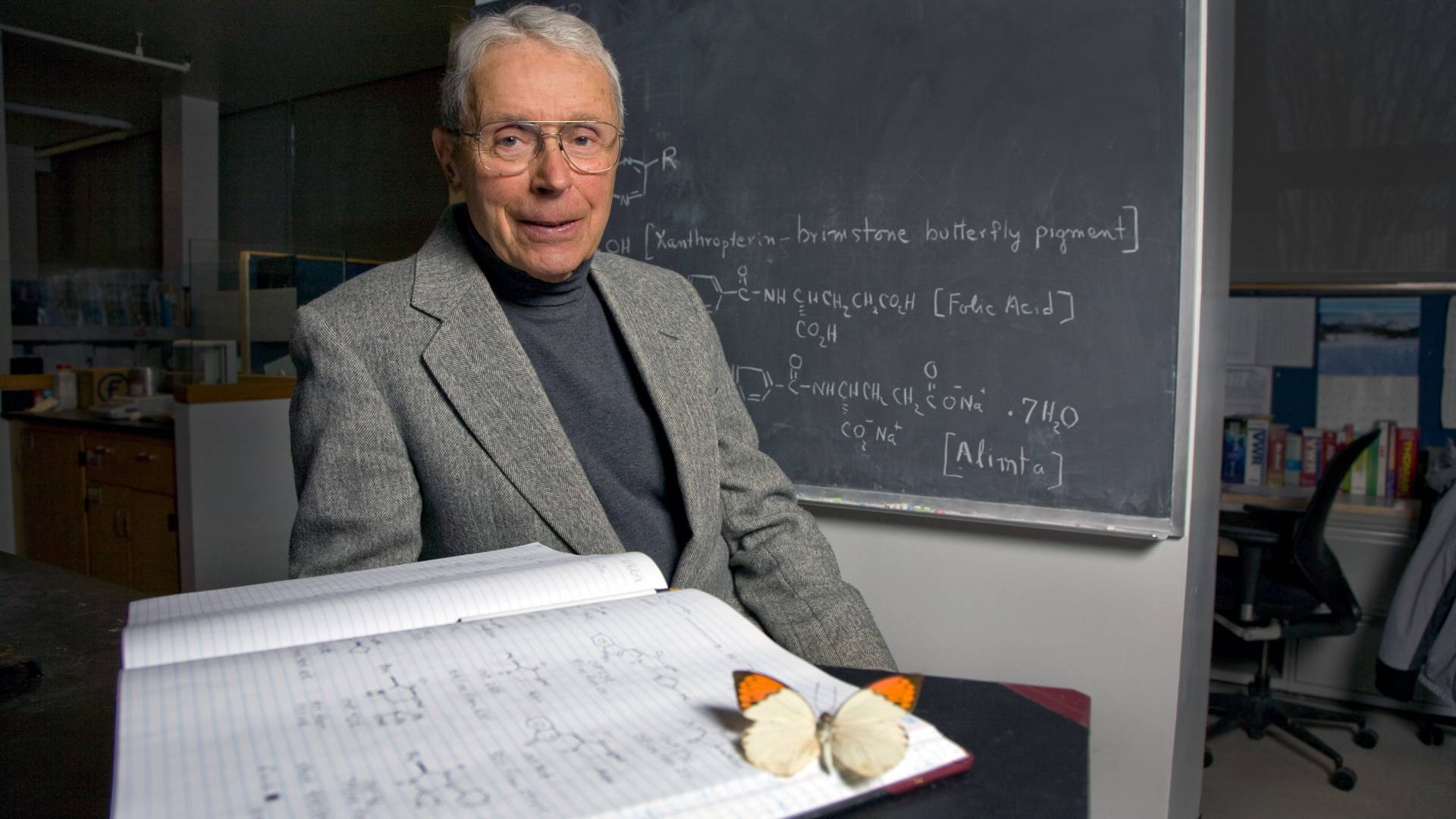 Edward C. Taylor, a Princeton University chemistry professor whose research into butterfly wing pigments led to the development of a cancer-fighting drug used worldwide, died Nov. 22 in St. Paul, Minnesota. He was 94.

"Ted Taylor's scientific discoveries contributed greatly to this University and to the medical treatments available to cancer patients," said Princeton President Christopher L. Eisgruber. "His ebullient love of chemistry and his cheerful spirit made him a mentor to many and a treasured friend to the Princeton Department of Chemistry. We will miss him greatly."

Taylor, the A. Barton Hepburn Professor of Organic Chemistry, Emeritus, joined the Princeton faculty in 1954 and transferred to emeritus status in 1997.

He was one of world’s leading heterocyclic chemists and made pioneering contributions to areas spanning synthetic methodology, natural products synthesis and medicinal chemistry.

Taylor's research led to the development of the anti-cancer drug Alimta in cooperation with the pharmaceutical company Eli Lilly to treat malignant pleural mesothelioma, a lung cancer often caused by exposure to asbestos. Approved by the U.S. Food and Drug Administration in 2004, the drug has since received additional approvals for treatment of other tumors.

The drug came about through Taylor's study of the properties of butterfly wing pigments. As a graduate student starting in 1946 at Cornell University — his undergraduate alma mater — Taylor was fascinated to learn that a compound obtained from spinach and liver had a unique chemical structure with a nucleus previously only observed in the pigments of butterfly wings.

This compound, now known as folic acid, proved essential for the synthesis of DNA and RNA, and for cell growth. Taylor had found his research focus: studying how changes made to folic acid could transform it from a growth-promoting compound to a growth-inhibiting compound — with the potential to kill cancer cells.

"I didn’t start out trying to find a cancer drug. Not at all," Taylor said at a symposium held in his honor on campus in April 2016. "I was just exploring the chemistry of these beastly chemical compounds with a two-ring structure that had been found in the wing pigments of butterflies.

"I admit that it’s nice, but anybody who knows how things are done when one accomplishes something like Alimta realizes that a lot of people contributed in all sorts of ways," he said.

One of the people at Eli Lilly with whom Taylor worked very closely on developing Alimta was Joe Shih. The two started collaborating in 1984 through the launch of the drug in 2004.

Shih described Taylor as "an extraordinary scholar, teacher, mentor and human being." He said that throughout the decades of collaboration, he "witnessed firsthand the great scientific prowess, passion on pursuit of excellence, highest standard of integrity in building a trustworthy atmosphere among all the collaborators, wonderful mentorship to younger colleagues, and finally, the never-fading enthusiasm and encouragement as a fellow human being, all from Ted, in making the collaboration a huge success for both Princeton and Lilly."

"Ted was a key member of our department for several decades," said Tom Muir, the Van Zandt Williams Jr. Class of 1965 Professor of Chemistry and chair of the department. Muir said that beyond his research, Taylor was a dedicated teacher who also served as chair of the department from 1973 to 1979. The U.S. patent for Alimta yielded royalties that supported the construction of the Frick Chemistry Building, which was completed in 2010.

"Ted was an incredible human being," Muir said. "His joie de vivre, fueled by a piercing intellect, was a rare thing indeed, as was his remarkable generosity — and that of his family. He will be greatly missed by everyone fortunate to have met him."

Taylor taught and mentored generations of Princeton students. Even in retirement, he continued to support and shape new generations of scientists by establishing the Edward and Virginia Taylor Professorship in Bioorganic Chemistry and the Edward C. Taylor Fellowships for third-year graduate students in chemistry.

One of the graduate students Taylor mentored was John Warner, president and chief technology officer of the Warner Babcock Institute for Green Chemistry, who received his Ph.D. from Princeton in 1988. Warner described Taylor as "the doting husband and father, the jazz trumpeter, the avid hiker, the scratch golfer (having never played before his 60s), and of course the brilliant chemist.

"Ted’s intellect and abilities were matched by his extremely warm heart and generous spirit," Warner said. "As a first-generation college student arriving at Princeton, Ted made me feel welcome and worthy. He had gentle, humble exuberance with which he pursued everything he did. Ted mastered the art of being human. He will be missed dearly, but his impact on chemistry and those whose lives he has touched is indelible."

Christina Bodurow, who earned her Ph.D. from Princeton in 1984, has known Taylor for 30 years, from her days as a graduate student and when working with Taylor at Eli Lilly, where she is senior director of external sourcing in the Medicines Development Unit of Lilly Research Laboratories.

"Ted worked in close collaboration with Lilly scientists and clinicians throughout the development of Alimta to help it finally reach literally thousands of patients," Bodurow said. "Ted was highly respected at Lilly and in the oncology community, and made hundreds of professional and personal friends during his nearly 50 years of consulting for the company. His extraordinary story is one to inspire the future generations of chemistry and oncology researchers, and he will be greatly missed."

"Ted was always the quintessential gentleman-scholar: engaging, warm-hearted and collaborative," said Homer Pearce, who worked with Taylor at Eli Lilly on developing Alimta. Pearce said the discovery of the drug "was due in the greatest measure to Ted’s encyclopedic knowledge of both chemistry and the role of folate requiring enzymes in cellular metabolism — all fueled by Ted’s boundless energy and intellect."

Wendy Young, who received her Ph.D. in chemistry from Princeton in 1993 and is vice president for discovery chemistry at Genentech, said: "Ted Taylor was the ultimate scientist, and I am forever grateful for the training I received in his lab. I feel fortunate to have been on the team that ultimately generated pemetrexed (Alimta), a drug that benefits so many cancer patients and is a standard treatment in mesothelioma and lung cancer. At Genentech we routinely combine pemetrexed with our novel oncology agents in the pursuit of further improving outcomes for lung cancer patients."

Taylor wrote more than 460 papers and holds 52 U.S. patents. He is the author of or served as editor or co-editor of 89 books on heterocyclic chemistry and organic synthesis.

In 2013, Taylor received the National Academy of Sciences Award for Chemistry in Service to Society. He was inducted into the New Jersey Inventors Hall of Fame in 2009 and received the 2010 Alfred Burger Award in Medicinal Chemistry from the American Chemical Society (ACS). Also in 2010, he was awarded an honorary degree from Princeton. Taylor’s other honors include the ACS’s Heroes of Chemistry Award, the International Society of Heterocyclic Chemistry Senior Award in Heterocyclic Chemistry, and the Research and Development Council of New Jersey’s Alva Edison Patent Award for Invention.

For the past 50 years, Taylor was a consultant for the research divisions of a number of pharmaceutical and chemical companies. He also served as an editorial adviser in organic chemistry to John Wiley & Sons. He was a member of the ACS, the Royal Society of Chemistry, the German Chemical Society, Phi Beta Kappa, Phi Kappa Phi and Sigma Xi, and was a fellow of the American Institute of Chemists, the New York Academy of Sciences and the American Association for the Advancement of Science.

A memorial service will be held at 3 p.m. on Saturday, Dec. 9, at the Central Presbyterian Church, 500 Cedar St., St. Paul, Minnesota. Donations may be made in Taylor's memory to the Thompson Senior Center, 99 Senior Lane, Woodstock, VT 05091.

View or share comments on a blog intended to honor Taylor's life and legacy.