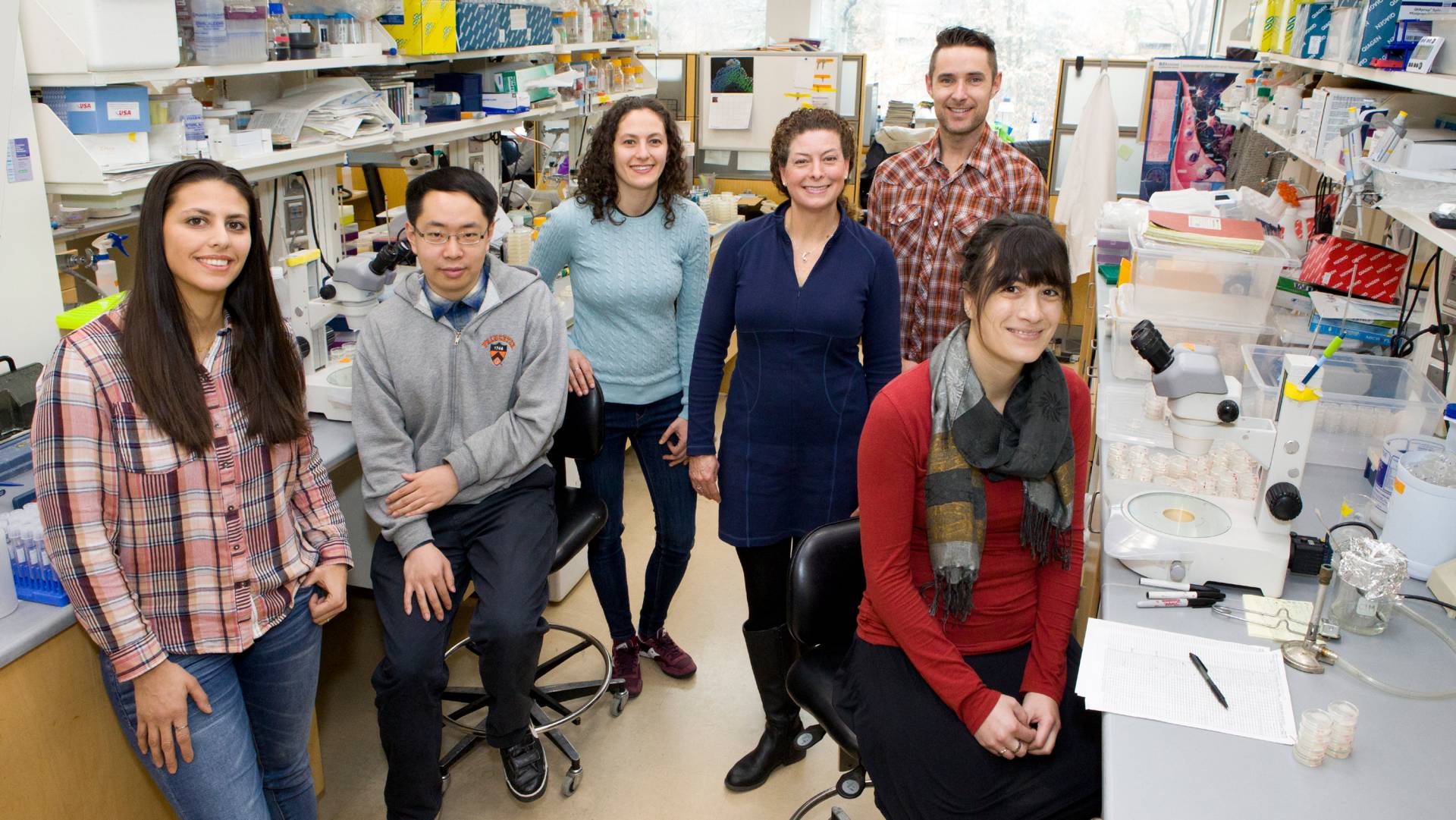 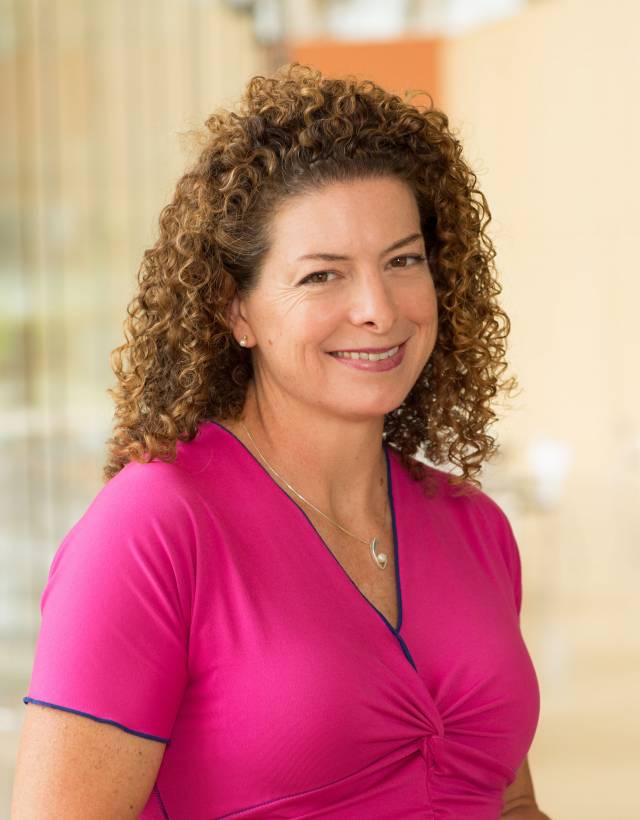 Women have been told for years that if they don’t have children before their mid-30s, they may not be able to. But a new study from Princeton University’s Coleen Murphy has identified a drug that extends egg viability in worms, even when taken midway through the fertile window, which could theoretically extend women’s fertility by three to six years. Her work appears in the current issue of the journal Current Biology.

“One of the most important characteristics of aging is the loss of reproductive ability in mid-adulthood,” said Murphy, a professor of molecular biology and the Lewis-Sigler Institute for Integrative Genomics. “As early as the mid-30s, women start to experience declines in fertility, increased rates of miscarriage and maternal age-related birth defects. All of these problems are thought to be caused by declining egg quality, rather than a lack of eggs.”

When she reviewed the literature on aging and on reproductive health about a decade ago, she discovered that this particular question — how to maintain egg quality with age — had been overlooked by researchers from both fields. “It’s really why we started this,” she said. “They were missing something that’s really important to a lot of people. We just wondered whether we could do anything to contribute to that.”

Murphy, who is also the director of the Paul F. Glenn Laboratories for Aging Research at Princeton, specializes in using a microscopic worm, Caenorhabditis elegans, to study longevity. These worms have many of the same genes as humans, including those that drive the aging processes of their three-week-long lives. Several years ago, researchers in her lab discovered that C. elegans not only exhibits a similar mid-life decline in reproduction, but also that their unfertilized eggs (oocytes) showed similar declines in quality with age to human eggs.

As they investigated why, the researchers in her lab focused on the genes and proteins that are more common in healthy, young eggs than aging ones. They recently decided to try the opposite approach — investigate why some proteins are “downregulated,” or less common, in the lower-quality oocytes.

Nicole Templeman and Rachel Kaletsky, postdoctoral research fellows in Murphy’s lab, investigated one downregulated group of proteins, cathepsin B proteases, that are rare in high-quality eggs and more common in eggs that have begun degrading with age. The existence of drugs that block these exact proteins provided an opportunity to test their effects.

As she prepared to block the proteins, “there were at least three possibilities,” Murphy said. “One, that this was just an inert marker of good oocytes, in which case, there would be no effect from blocking these proteins. Two, their expression increased as a compensatory mechanism to fight the effects of aging, in which case, blocking the proteins’ activity would make things even worse. Or three, that these proteins normally increase in old, poor-quality oocytes and are part of the problem — in which case, their loss would help slow age-related decline.”

When Templeman administered the drug, she found that the answer was behind door number three: The treated worms still had healthy eggs long after the control group did not.

They had administered the drug at the beginning of the worms’ reproductive window, the equivalent of puberty, so even though the drug worked, it wouldn’t be helpful to adult women, Murphy said.

“What you want is a drug [that] you could give to a woman in her mid-30s, and it would still preserve the oocytes that she has,” Murphy said. So that’s what Templeman tried next. She waited until halfway through the worms’ reproductive period before she gave them the drug.

“Nicole was very restrained,” Murphy said. “She said, ‘I think I might have interesting to show you,’ and I’m jumping around. Because you can really see it — see the difference between the worms that were treated and not treated.” 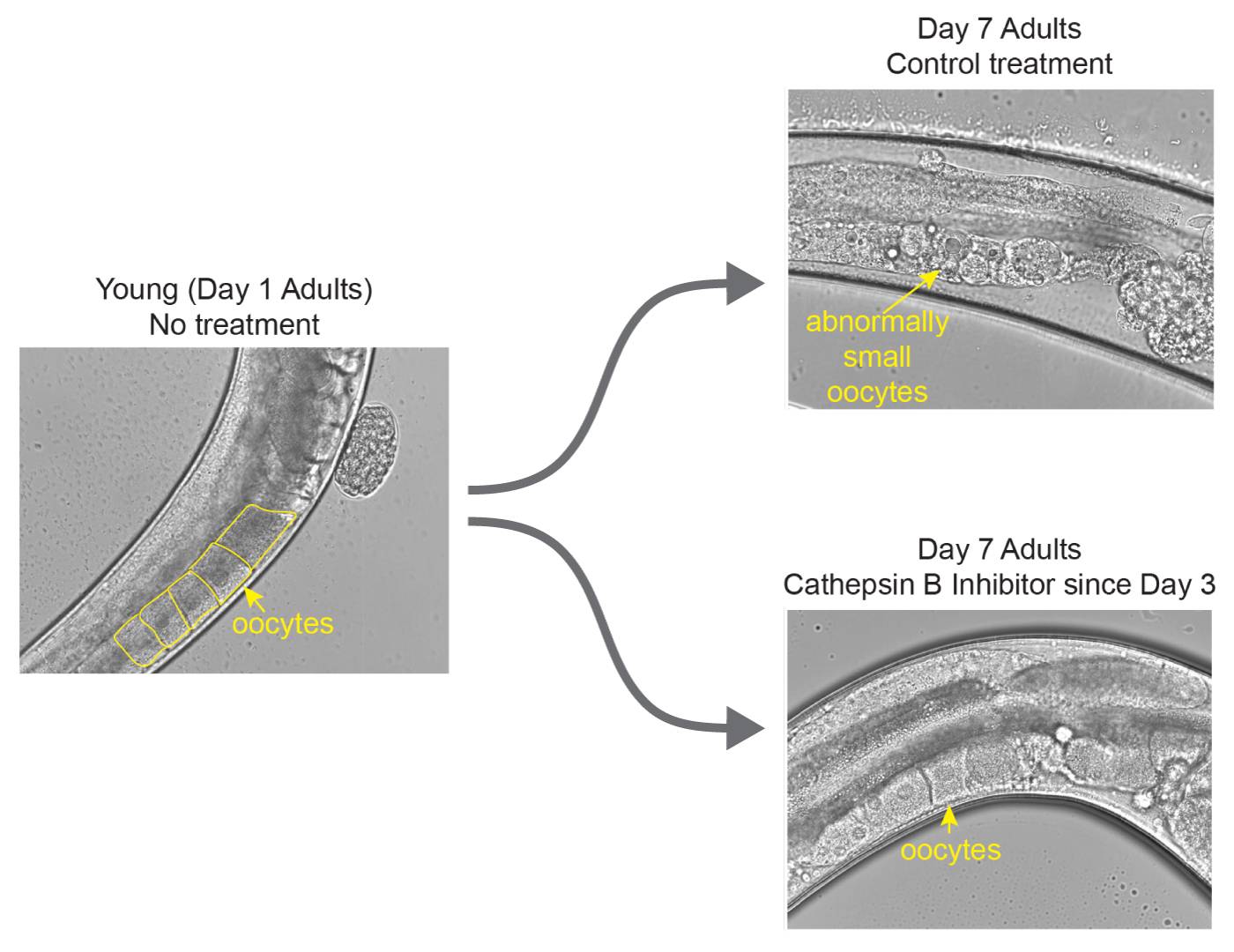 The Princeton research team identified a key protein in old, poor-quality C. elegans oocytes (unfertilized eggs): cathepsin B. When they administered a cathepsin B inhibitor midway through the fertile window — on day 3 of the worms' adulthood, the equivalent of a woman in her early 30s — they successfully extended egg viability beyond the normal span. Here, the image at the left shows a worm at the beginning of its reproductive window (day 1 of adulthood) with healthy, squarish unfertilized eggs. Worms who did not receive the treatment (upper right) have abnormally small, misshapen eggs by day 7 of adulthood. Worms who did receive the inhibitor (lower right) still have healthy, squarish eggs on day 7.

The results were better than they had hoped, showing that even a late administration of the drug could extend the worms’ egg quality. Another experiment that knocked out the cathepsin B genes entirely succeeded in extending worms’ fertility by about 10 percent. If applied to humans, Templeman said, “It could be a three- to six-year extension of your reproductive period.”

It can be hard to believe that microscopic worms could have anything in common with mammals, let alone humans, Murphy admitted. That’s why she and Templeman were delighted to discover a cattle breeding study that found the cathepsin B proteins that affect the C. elegans oocytes play the same role in cows.

“Any time you can do something in worms where you really feel you might be on the right track for mammals, that makes it pretty exciting,” Murphy said. “There’s still this idea out there that ‘Worms are so different from mammals.’ But we keep finding the same genes — and now we’re finding the same kind of drugs could affect this.”

“This study is significant on several fronts,” said Sean Curran, an associate professor of biogerontology at the University of Southern California Leonard Davis School who was not involved in the research. “Reproductive decline is a hallmark of aging, but despite its prevalence, interventions to slow the loss of reproductive capacity are lacking. Dr. Murphy and colleagues have capitalized on their rich data sets to identify a pharmacological target to quell the loss of reproductive decline that comes with age.”

The cathepsin B inhibitor is nowhere near ready for testing in humans yet, Murphy said. “That’s not our area,” she said. “We wanted to say: This is something that could work. … The idea that you could do something mid-reproduction to improve the rest of reproduction — for me, that’s a game changer.”

The article, “Insulin signaling regulates oocyte quality maintenance with age via Cathepsin B activity” by Nicole Templeman, Shijing Luo, Rachel Kaletsky, Cheng Shi, Jasmine Ashraf, William Keyes and Coleen Murphy appears in the journal Current Biology on March 8, and was released online today. The study was supported by the Glenn Foundation for Medical Research, and National Institute of Health New Innovator (1DP2OD004402-01) and March of Dimes awards to Murphy. Templeman was supported by a Banting Postdoctoral Fellowship.

Editorial note: Worm researchers distinguish between “oocytes,” unfertilized eggs and “eggs,” which have been fertilized, but this article uses the terms interchangeably. For details about the experiments done with oocytes or fertilized eggs, please see the published research.