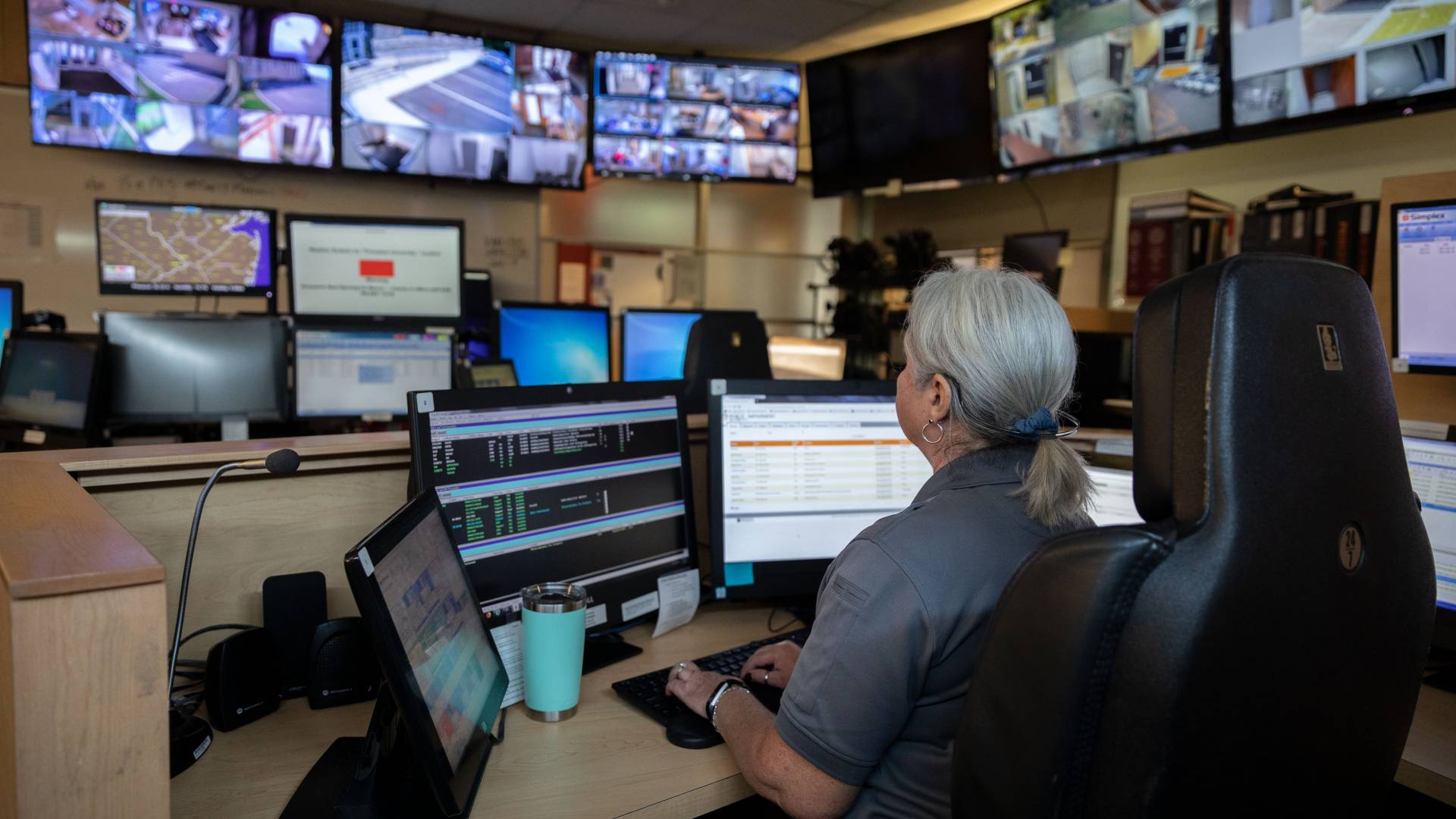 Princeton University Department of Public Safety’s Communication Center will be one of the first in the nation to have access to pinpoint-accurate 911 mobile call data when Apple introduces iOS12 for the iPhone later this year. Pictured here, Dispatcher Terri Vandegrift monitors emergency calls and campus security operations from the Communication Center at 200 Elm Drive.

Princeton University’s Department of Public Safety will be among the first emergency dispatch centers across the country to receive precise location data for 911 mobile calls placed within its jurisdiction.

For nearly a year, the department has been involved in beta testing and development for RapidSOS NG911, an Internet Protocol-based system that gives emergency responders rich data about 911 callers. Apple announced June 18 that it is partnering with RapidSOS, an emergency communications startup, to provide accurate location information to emergency dispatchers receiving 911 calls from iPhones.

“Since August of 2017, the emergency call management system at Public Safety has been integrated with the RapidSOS NG911 Clearinghouse for testing this solution,” said Paul Ominsky, executive director of Princeton’s Department of Public Safety. “The results were incredible, and the announcement by Apple means that Princeton University’s Department of Public Safety will be among the first call centers in the nation to be able to take advantage of this fast, accurate caller location information when calling 911 from an Apple device.”

Princeton University’s Communication Center is the first in New Jersey to test and deploy this technology and is among a handful of early adopters nationwide.

The 911 location service will be operational later this year with the rollout of the next generation of Apple’s operating system, iOS 12. A similar announcement from Google regarding Android phones is hoped for in the near future, said Keller Taylor, infrastructure operations manager for the Department of Public Safety.

“In the 911 community, this is absolutely huge,” Taylor said. “When you place a 911 call, the first thing you hear is, ‘9-1-1, where is your emergency?’ Because if you know where the person is, even if you get disconnected, at least you can send somebody to check and try to identify what the concern is. Without the location, and especially without the accurate location, in many cases you don’t know where to go. You don’t know what to do.” 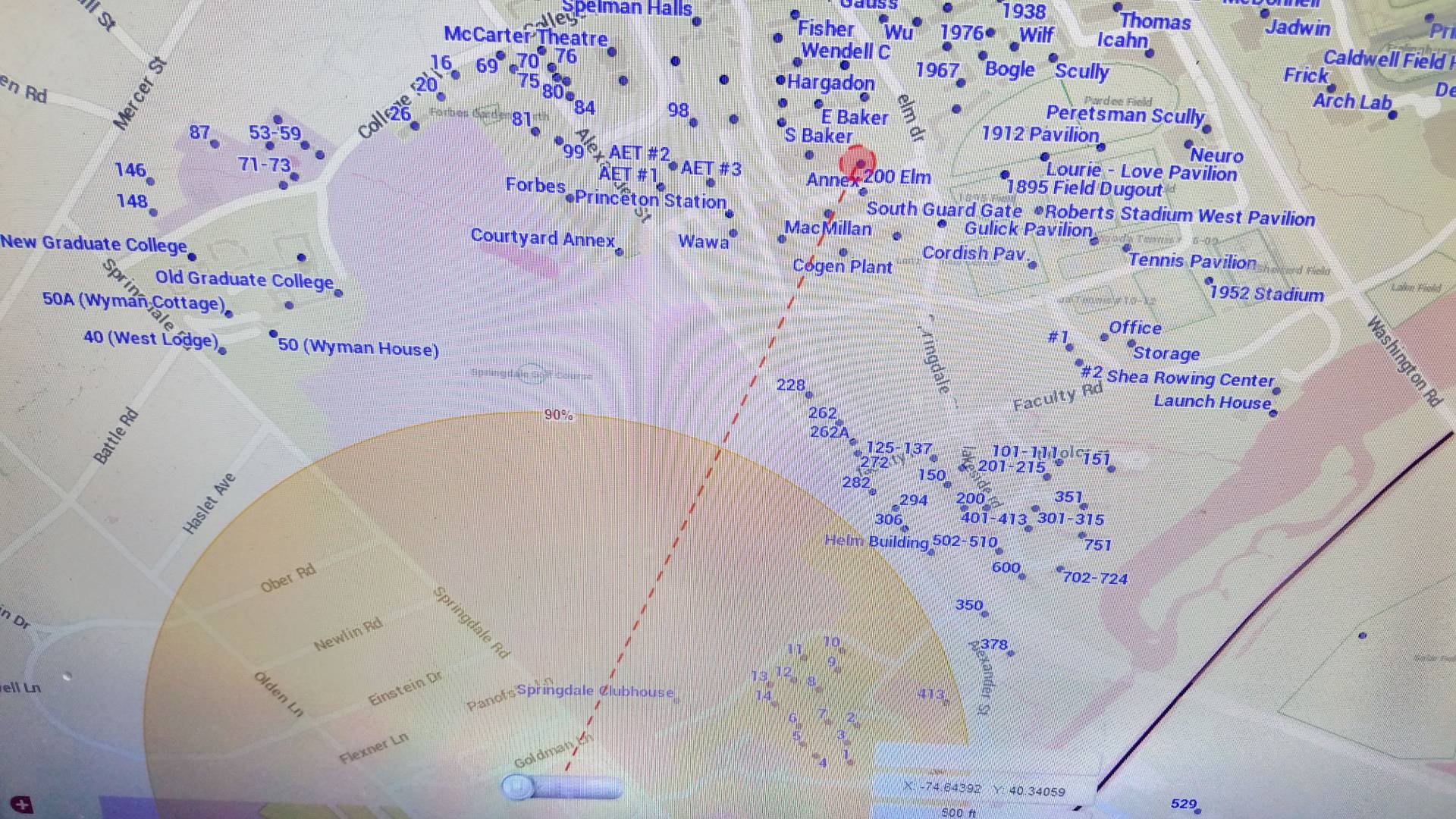 A test of the RapidSOS NG911 system shows where the current 911 system thinks a mobile emergency call was placed (within the yellow circle) and the actual location (the red circle). The yellow circle is a best guess generated from cellphone tower triangulation, while the red circle comes from location information that RapidSOS relays to the Communication Center directly from the caller’s own phone.

At least 80 percent of all 911 calls nationwide are placed from mobile devices, according to the National Emergency Number Association. Most emergency call centers, however, still use systems and software that are based on a landline infrastructure, making it difficult to pinpoint where the calls originate.

Princeton has worked with Motorola, a leading provider of emergency communications software and equipment, for the past eight years to upgrade its Communication Center technology, Taylor said. At present, whenever a 911 call comes in from a mobile phone, a circle appears on a map of the campus estimating the location of the caller using cellphone tower triangulation. The dispatcher also is given the likelihood of the caller being within that area. “It will say, for example, we’re 90 percent certain that the caller is somewhere in this circle,” Taylor said. “In some cases, it could be half a mile in terms of the diameter, which is basically useless.”

Once the RapidSOS data is live in the system, the location appearing on the screen will be pinpoint accurate, using data directly from the caller’s phone. Dispatchers will receive x and y and soon z coordinates (latitude, longitude and height — the latter of which is essential in determining on which floor a caller is situated in a multi-story building).

What the dispatcher sees on the screen is similar to the Uber car ride app, which shows in real time the precise location of Uber drivers and their customers, Taylor said.

“We see that caller, and we see as they’re moving around, which is something you cannot get today from the [phone] carriers themselves with this degree of accuracy,” he said.

Taylor said knowing a caller’s exact location is especially critical at Princeton when responding to emergencies involving the University’s 850,000 annual visitors. Many University buildings and locations look similar and signs are often small or located only at the front of a building. Callers unfamiliar with the campus can be hard-pressed to explain to a dispatcher where they are.

The location map provided through RapidSOS not only helps first responders know exactly where to find 911 callers, but it also gives dispatchers a tool to direct emergency workers in real time. “Because of the extensive mapping that we have of the campus that is on our maps in the Communication Center, they’re able to clearly say, this building, this side, this location,” Taylor said. “They can say, instead of coming down Elm Drive, your best access is going to be coming off of Washington, for example. Being able to determine on a map what side of the building they’re on can be very, very critical.”

RapidSOS determines a caller’s location from data collected from Wi-Fi access points, nearby cellular towers and GPS. It sends the information through an encrypted connection, and only the responding call center can access the user’s location during an emergency call, according to the company. IPhone users will have the ability to opt-out of the service in their phone settings.

“Since this was announced I’ve had several other agencies here in New Jersey reach out to find out what we did, why we did it, how we did it, the benefits that we’re hoping to get from it, which is great — to know we’re on the leading-edge of technology solutions when it comes to public safety,” Taylor said.

Campus residents displaced by storms being sheltered in Frist