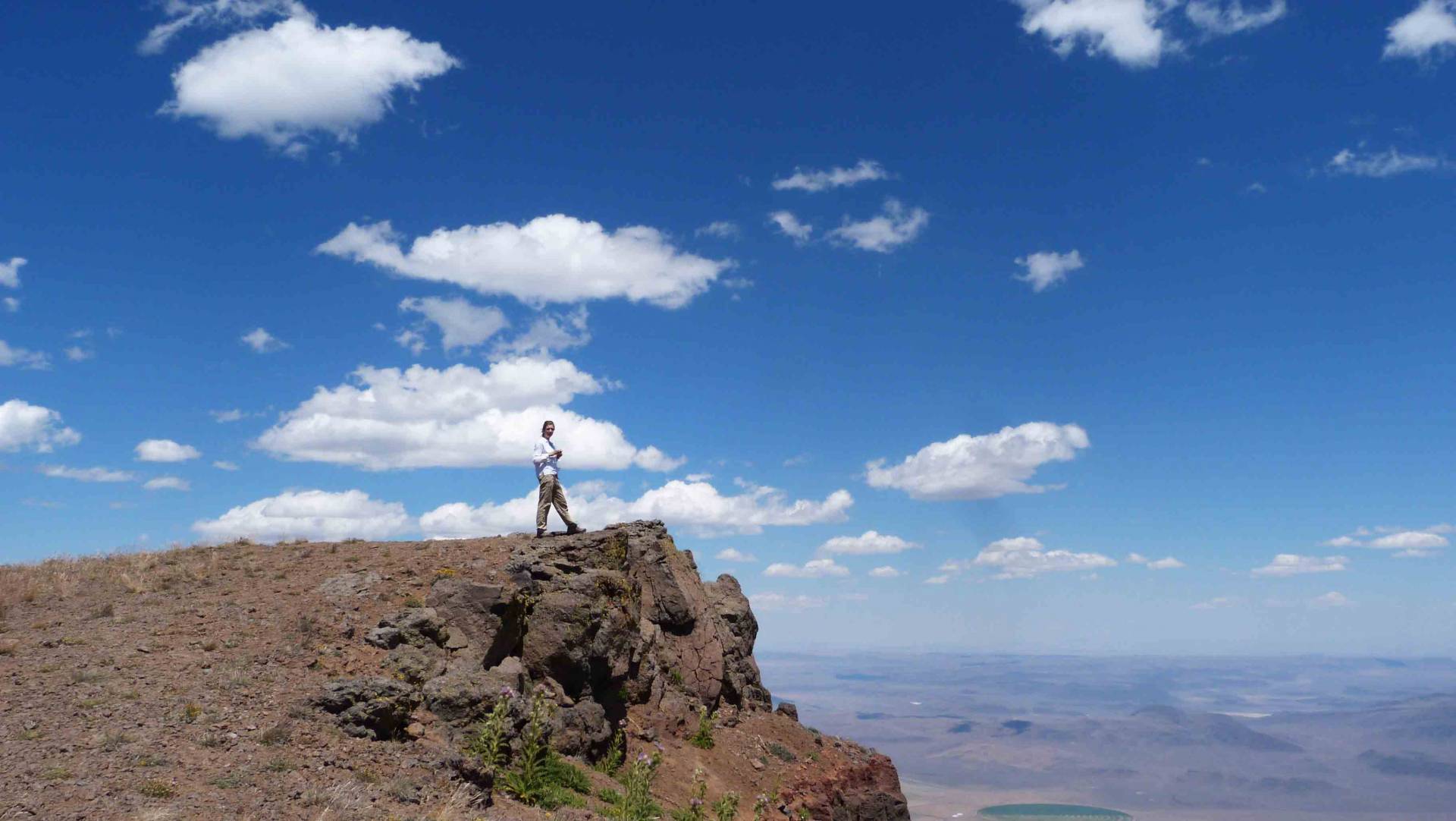 Princeton geologists used tiny zircon crystals found in volcanic ash to rewrite the timeline for the eruptions of the Columbia River flood basalts, a series of massive lava flows that coincided with an ancient global warming period 16 million years ago. Jennifer Kasbohm, a graduate student in geosciences, stands on a layer of soft red ash on Steens Mountain in Oregon, where she found zircons that constrained the age of the oldest formation of the Columbia River Basalt Group.

Imagine an enormous volcano erupting in the Pacific Northwest, pouring lava across Washington, Oregon and Idaho. Imagine the lava flooding out until river valleys are filled in. Until bushes and shrubs are buried in liquid rock. Until the tallest trees are completely covered.

About 16 million years ago, this happened.

Lava erupted in pulses, ultimately burying the region to the height of a 30-story building. If the lava had been spread evenly over the lower 48 states instead of staying concentrated in the northwest, it would cover the country to a depth of about 80 feet.

Before now, most geologists believed that it took almost 2 million years to erupt all that lava, collectively known as “the Columbia River flood basalts.” But Princeton researchers are publishing findings today that show it happened more than twice as fast as previously believed, with 95 percent erupting within a 750,000-year window. 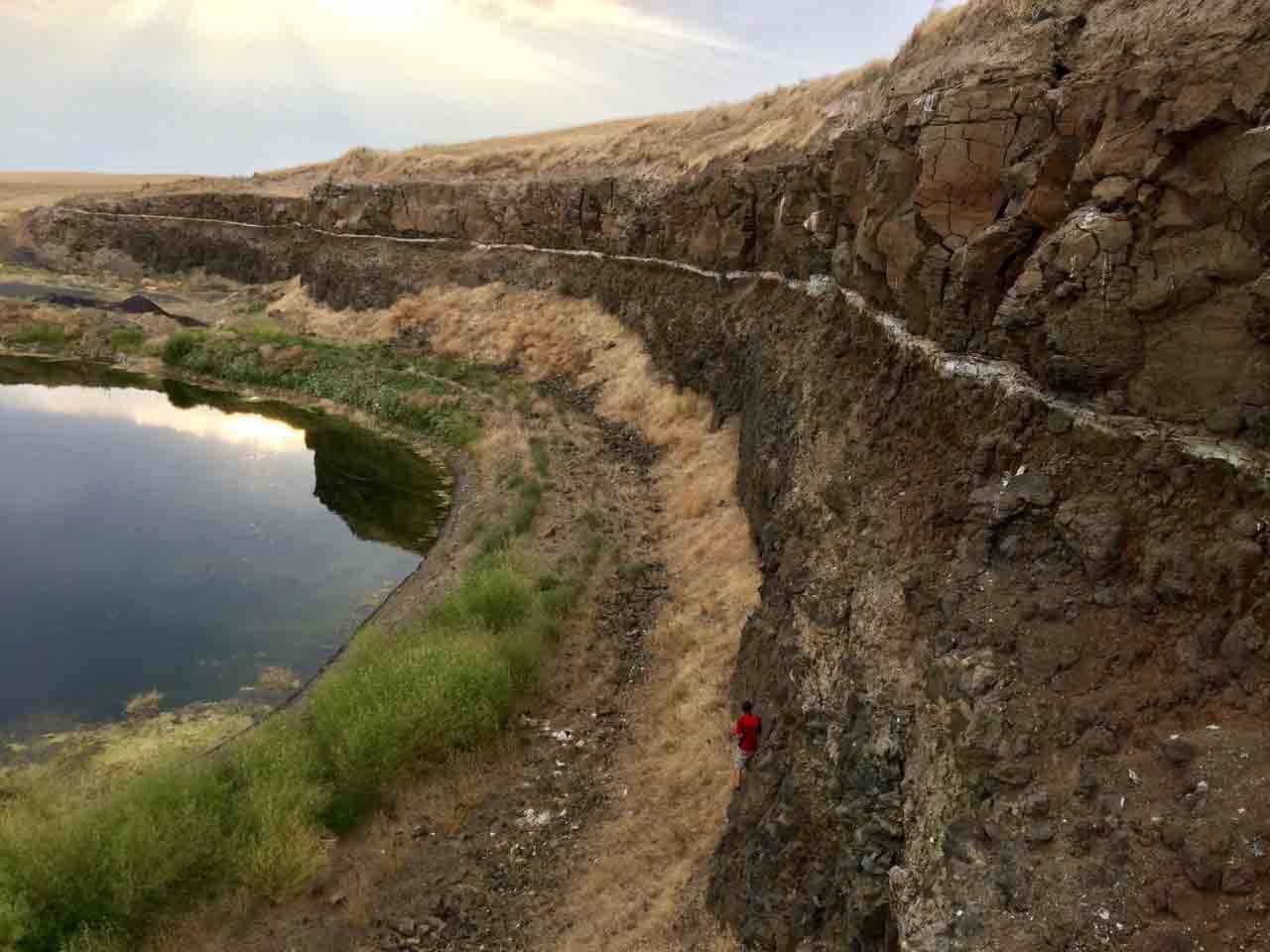 Josh Murray of the Class of 2018 (in red) stands at the base of a cliff that shows a layer of grey volcanic ash, found between two basalt flows, which yielded zircons that constrained the age of the Wanapum Basalt.

Flood basalts have fascinated geologists for centuries. As the largest volcanic events on Earth, they have been implicated in mass extinctions, such as the largest extinction event in Earth history, 252 million years ago. There was no mass extinction 16 million years ago, but there was a major climate event about that time, known as the Mid-Miocene Climate Optimum (MMCO), a global warming event with high temperatures and elevated atmospheric carbon dioxide levels.

The same volcanoes that erupt liquid rock also belch out greenhouse gases, so geologists have wondered if there was a connection between the flood basalts and the MMCO global warming event. Just one problem: Before now, no one was quite sure about the timing of the Columbia River flood basalts.

"In order to answer the question of whether the Columbia River flood basalts caused the MMCO, we need to know the timing of eruptions and climate shifts as precisely as possible," said Blair Schoene, associate professor of geosciences.

"To put it simply, people didn’t know exactly when or over how long the Columbia River Basalt Group erupted, which made it difficult to explore a causal relationship with the MMCO,” said Jennifer Kasbohm, a graduate student and lead author of the paper appearing today in the journal Science Advances.

To help explain the scale of the eruptions, Kasbohm drew a parallel to the 2010 Eyjafjallajökull eruption in Iceland. “The Icelandic eruption shut down airports in Europe for a week, affecting 10 million travelers, and there were periodic airline disruptions for the following month,” she said. “Now imagine having one of those Icelandic eruptions every 8 months for 750,000 years in a row, and that would give you our predicted eruption rate for the Columbia River basalts.”

Three undergraduates accompanied Kasbohm and Schoene in the lab and the field, contributing to their research while completing projects of their own: Josh Murray of the Class of 2018, Sam Bartusek ’20 and Kyle Duffey ’19. “The project involved seven weeks of fieldwork, with many days over 100 degrees Fahrenheit,” said Kasbohm. “We encountered a handful of rattlesnakes, numerous spiders, friendly and helpful locals, and we managed to stay one step ahead of the forest fires in the region.”

They were looking for zircons, tiny minerals containing trace amounts of uranium. Over time, the naturally radioactive material decays into lead, so geologists can use the ratio of uranium to lead to calculate exactly how old the zircon is. Unfortunately for geologists, basaltic lava flows like the Columbia River flood basalts don’t have the right chemistry to make zircons, so until now, geologists have had to settle for dates with uncertainties of over a million years, produced through other dating methods.

"To test for a causal link between climate and eruptions, a million years is not good enough," said Schoene.

The researchers got around the lack of zircons in the lava rocks by looking at layers of volcanic ash between the basalt layers. The ash came from the nearby Cascade volcanoes (including Mount Saint Helens), which do contain zircon and were erupting about the same time as the massive lavas. 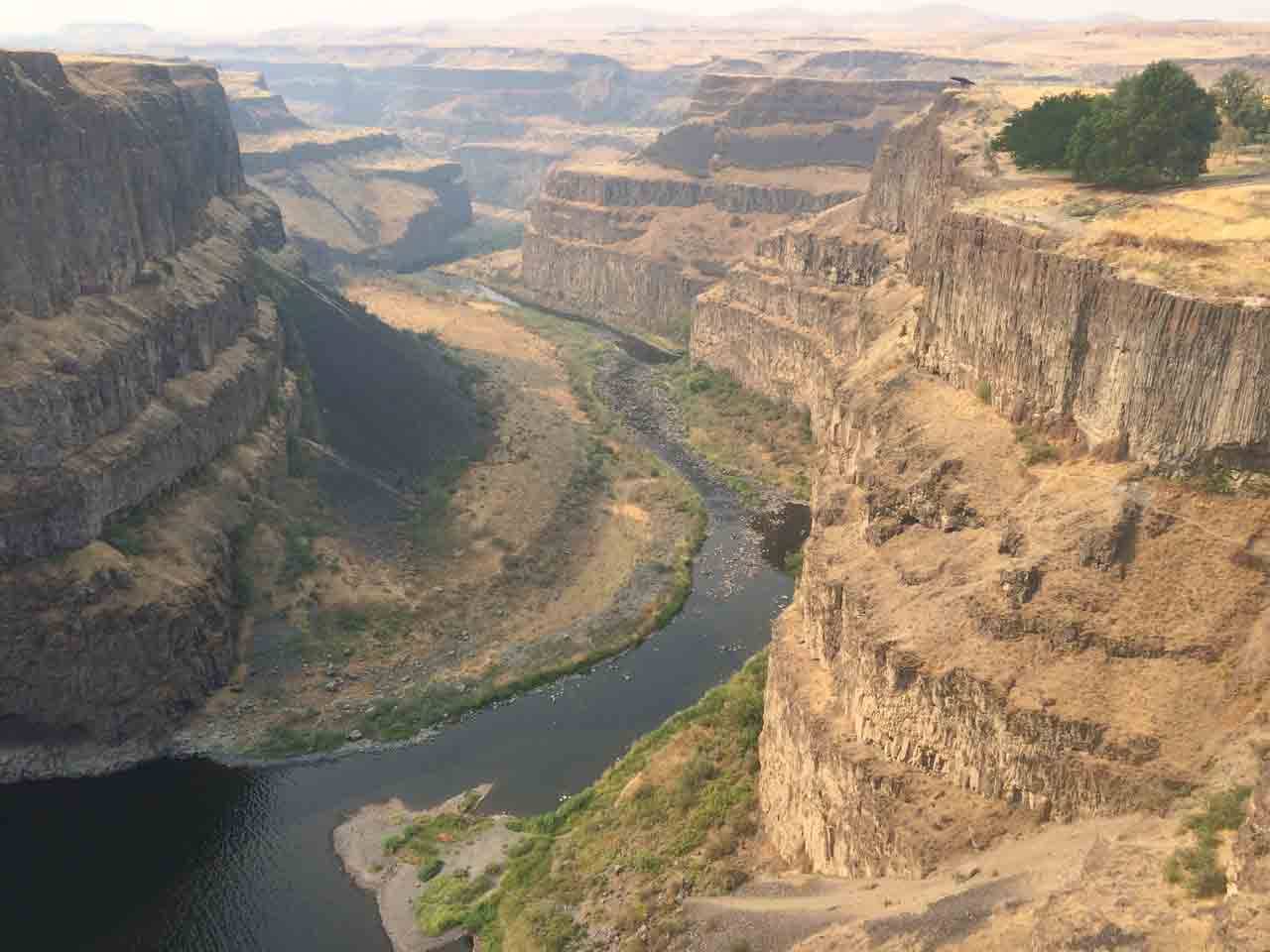 Palouse Falls State Park in Washington presents an excellent exposure of lava flows of the Wanapum Basalt, the second-youngest formation of the Columbia River Basalt Group.

In their lab at Princeton, Kasbohm and Schoene separated 0.1 mm sized zircons from the 16-million-year-old rocks, measured the isotopic ratios of uranium and lead, and pinned down the ages of individual lava flows to within a few tens of thousands of years. “That precision is basically the best you can do with any chronometer for samples of this age — even though 10,000 years sounds like a lot — so our method is the gold standard,” she said.

"This is the most significant paper to come out about the Columbia River flood basalts in a decade or two," said Stephen Reidel, a research professor of geology at Washington State University–Tri-Cities, who has studied these lava flows since 1972 and contributed to the analysis of this research. "Jenn and Blair deserve a lot of compliments for thinking to look at the zircons in the ash beds between the flows.… Of course, now we're going to have to go back and re-calculate everything that used the old timeline or eruption rate. That's okay — that's part of the fun."

With their more precise timeline, Kasbohm and Schoene have now shown that the prehistoric climate change did start very close in time to the beginning of the eruptions, but further work is needed to pin down the connection between them.

This 16-million-year-old climate change event is the last time that carbon dioxide concentrations in the atmosphere shot above 400 parts per million — until the last decade.

“The MMCO could be a parallel to our current climate, and further work investigating the timing and duration of that event will tell us more about how we can expect Earth to recover from anthropogenic climate change,” Kasbohm said. For instance, if the climate stayed warm for a million years after the volcanoes stopped erupting, as now looks possible, that could have significant implications for predicting how long the atmosphere will respond to human-caused global warming.

“Time matters,” said Kasbohm, “whether we’re trying to learn about Earth’s past or its future. It’s very empowering to use tiny minerals to tell the story of these voluminous rocks.”

The article, “Rapid eruption of the Columbia River flood basalt and correlation with the mid-Miocene climate optimum,” published in the Sept. 19 issue of Science Advances (DOI: 10.1126/sciadv.aat8223), was supported by the National Science Foundation Graduate Research Fellowship under Grant No. DGE-1656466, by the Princeton Environmental Institute through the Walbridge Fund and by the Princeton University Department of Geosciences Scott Vertebrate Fund.