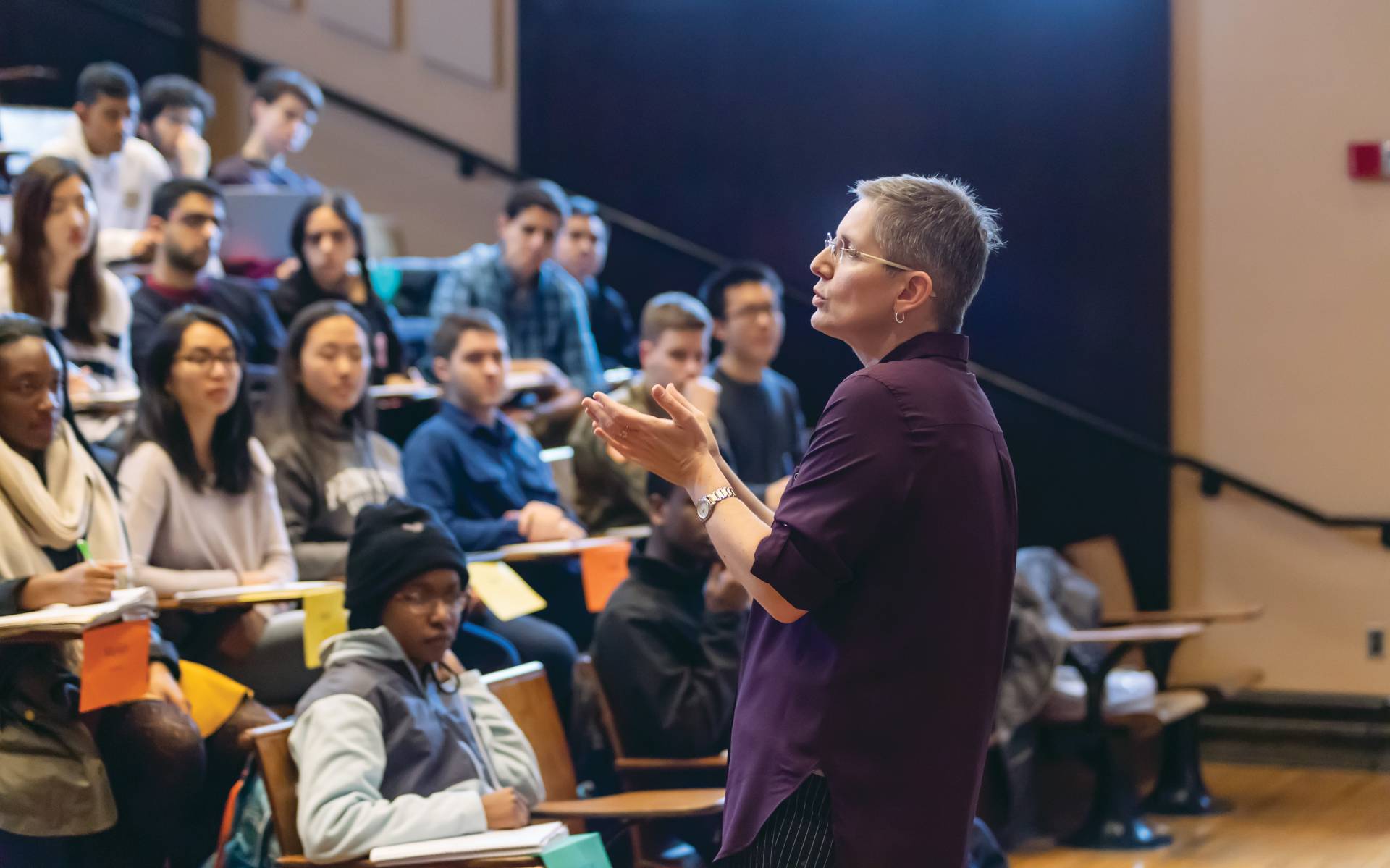 Princeton Professor Andrew Houck’s calculus students had just finished grappling with a set of equations on the forces of tension and gravity when he pulled a large pendulum back to his shoulder and let it go.

The copper disk swayed back and forth in front of the blackboard as Houck directed the students to time its swings. He later explained that the math describing the pendulum’s motion could be used to tackle practical problems such as using vibrations of atoms to detect pollutants or minimizing the shaking of skyscrapers in an earthquake.

Professor Andrew Houck teaches a calculus course, “The Mathematics of Shape and Motion.”

Houck’s course, “The Mathematics of Shape and Motion,” is part of a new sequence of courses for first-year undergraduates in the School of Engineering and Applied Science. The courses, offered through the Keller Center for Innovation in Engineering Education, present the same math and physics as more traditional course offerings, but place a greater emphasis on problem-solving in the context of modern engineering challenges.

Houck, a professor of electrical engineering, said faculty members wanted to provide students with more meaningful exposure to engineering in their first year. Beginning in 2014, he chaired a strategic planning committee that reviewed the engineering school’s undergraduate program, and later led a team of faculty who developed the new courses. The courses were piloted during the 2017-18 academic year with the aim of boosting student retention rates in engineering.

“Over the years, huge numbers of students who wanted to be engineers have taken themselves out of the game,” he said. With the new approach, “they’re going to be engineers, and they are going to do amazing things.”

Houck, who called the new courses “the most impactful thing I have done in my career,” said the students gain foundational skills while practicing problem-solving approaches from all fields of engineering. This helps students make informed decisions when choosing their majors at the end of the first year, and prepares them to apply math and physics concepts in later coursework and research.

“We’re trying to connect the skills they are learning to very specific, tangible problems, both so that students can be more engaged and excited, and so that they retain it better,” said Houck.

In addition to the fall-semester calculus course, Houck teaches a spring-semester course in linear algebra. The mathematics sequence also includes a fall-semester sophomore course in multivariable calculus, taught this year by N. Jeremy Kasdin, the Eugene Higgins Professor of Mechanical and Aerospace Engineering, who was vice dean of the engineering school during the strategic planning process from 2014-16. 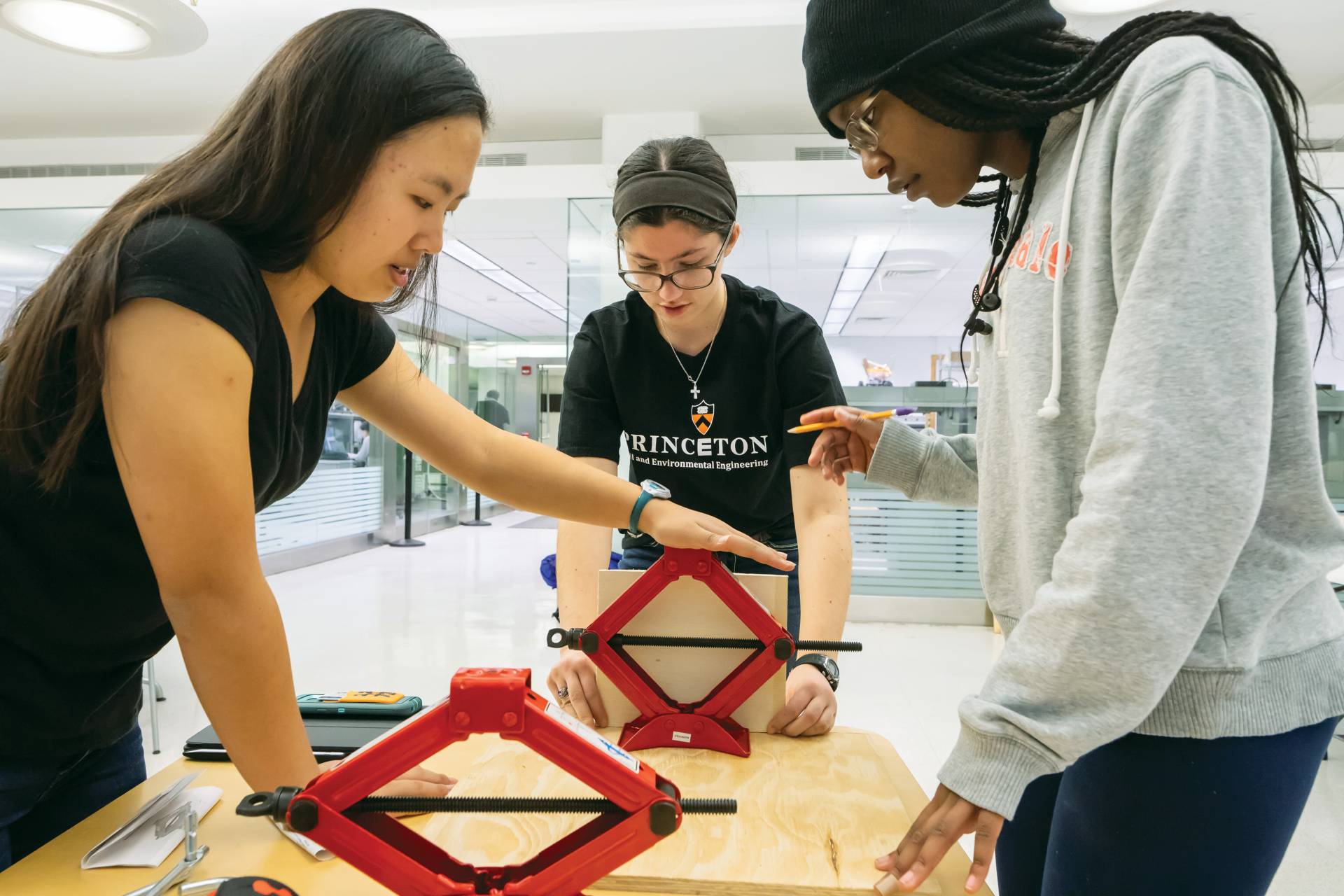 In the laboratory for the course “Mechanics, Energy, and Waves,” first-year engineering students (from left) Grace Gong, Emily Colborne and Taj-Jahnae Brailsford-Forde work on a prototype for a portable cushion that would help people with limited mobility get up from a chair.

The courses are aimed at students who come to Princeton with solid high school preparation, but have not taken Advanced Placement physics in high school or placed into multivariable calculus as first-years.

“Students come to Princeton with all sorts of different backgrounds,” said Peter Bogucki, the engineering school’s associate dean for undergraduate affairs. “We don’t want those students to be washed out of engineering, or get the impression that you have to start out as an expert in these subjects to be a good engineer.”

During the planning process, Houck and his colleagues concluded that, by building on these students' interest and enthusiasm for engineering, a new set of courses could help increase retention.

Houck noted that a disproportionate number of students who opt to leave the school are from groups underrepresented in engineering, contributing to the “leaky pipeline” that impedes diversity in the field. The conventional first-year curriculum contributed to the leak, Houck said, and the school was determined to make improvements.

A major goal of the new courses, Houck explained, is “to have a diversity of approaches so that students can find the right onramp into the school of engineering — so that we don’t just filter away students for whom the one-size-fits-all approach doesn’t work. We want students to leave engineering only if they find something else that’s even more exciting to them.”

He also pointed out that the gap between students with and without Advanced Placement credit “is so easy to close if students don’t take themselves out of the game. I am 100 percent sure that my students know as much as any student in a traditional course sequence.”

Of the 49 first-year students who took at least one of the pilot courses in academic year 2017-18, only three have left the engineering school — a rate of about 6 percent, compared to 14 percent in the rest of the entering class. Encouragingly, the students switched out of engineering to pursue science and public policy, and still completed the courses. And because about two-thirds of the students in the pilot courses were women, the engineering school’s current sophomore class has reached an all-time high of more than 40 percent women.

Of course, this is a small sample size and a short track record, admitted Houck. This fall, the school raised enrollment numbers for the courses by 50 percent, and is continuing to gather student feedback and follow outcomes for the courses’ first two cohorts, in partnership with the University’s Council on Science and Technology.

Gmachl, who teaches the fall-semester physics course, said the new course sequence creates a community of students who are well-aligned in their goals and preparation — a close-knit cohort that promotes learning. A large body of research shows that a strong sense of belonging is particularly important for the success of students from groups that are underrepresented in engineering, said Paul Durst, assistant director of STEM education at the Council on Science and Technology.

Gmachl said she has found it especially rewarding to see more and more students earn high scores on problem sets as the semester progresses. One problem set asks students to compare the travel time and energy use of a typical Amtrak train to a Hyperloop train, a proposed high-speed system that would operate inside a sealed tube with negligible air resistance and friction.

In the laboratory portion of the physics course, students build model roller coasters and oscillating motors, and learn to use computer-aided design software. As a capstone project, students develop original designs that address one of three challenges: harnessing unused energy to charge a cell phone, improving assistive devices for people with limited mobility, or incorporating new features into the Lego system.

While the first two options have more practical relevance than the third, said Gmachl, “engineering and design are about being creative under constraints. It can be as crazy as building spring-loaded or self-destructing Legos. Whatever the idea is, we’re pulling it back into the mechanics of a system.”

In the fall of 2017, Tobi Ayeni and two of his classmates took on the cell phone charging challenge, devising miniature turbines to fit inside sink drains and generate electricity from the force of falling water. A year later, the team is continuing to develop their idea with support from the Princeton Student Climate Initiative.

Ayeni, now a sophomore majoring in civil and environmental engineering, said he appreciated being given “free range” to take the physics laboratory project in different directions. He praised the instructors of the new courses for their “contagious enthusiasm” and deep dedication to teaching, which he said had great value in supporting students’ learning. 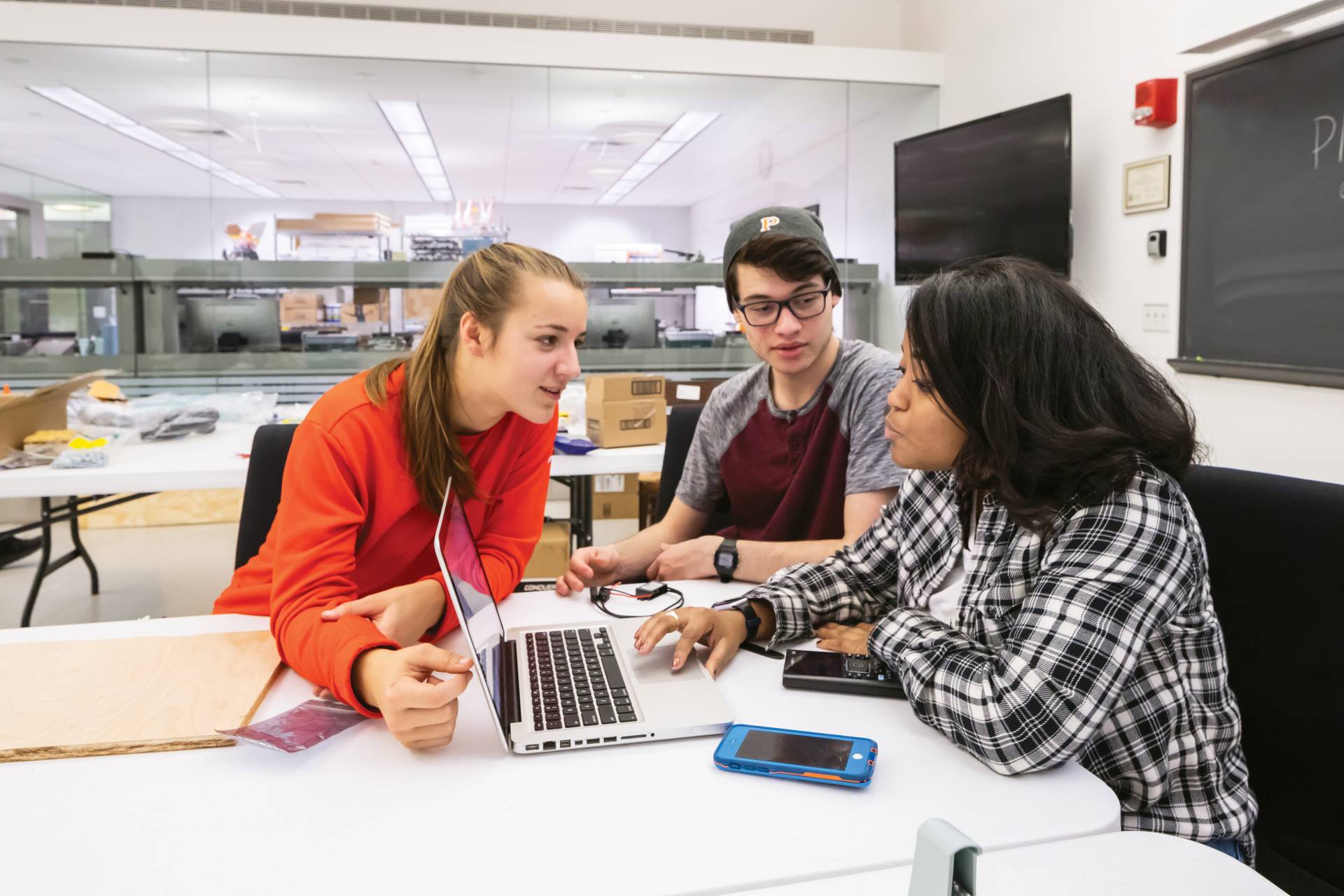 Sophomore Jovana Kondic, also a member of the courses’ pilot cohort, said that she has “an ongoing relationship” with the fundamental math and physics concepts she learned last year, and often refers to her notebooks from the introductory courses. She recently attended a talk on machine learning by an engineer from Facebook, who mentioned techniques covered in Houck’s linear algebra course. Kondic added that her first-year coursework inspired her to major in electrical engineering, and she is particularly excited about the possibilities of quantum computing.

“I used to have this impression that the engineers in those companies or national organizations were way above what we do as students, and it almost felt like something that was hardly reachable,” said Kondic. “It feels very nice when you realize that they don’t use any special math that we’re not exposed to. It’s actually what we learn in school.”