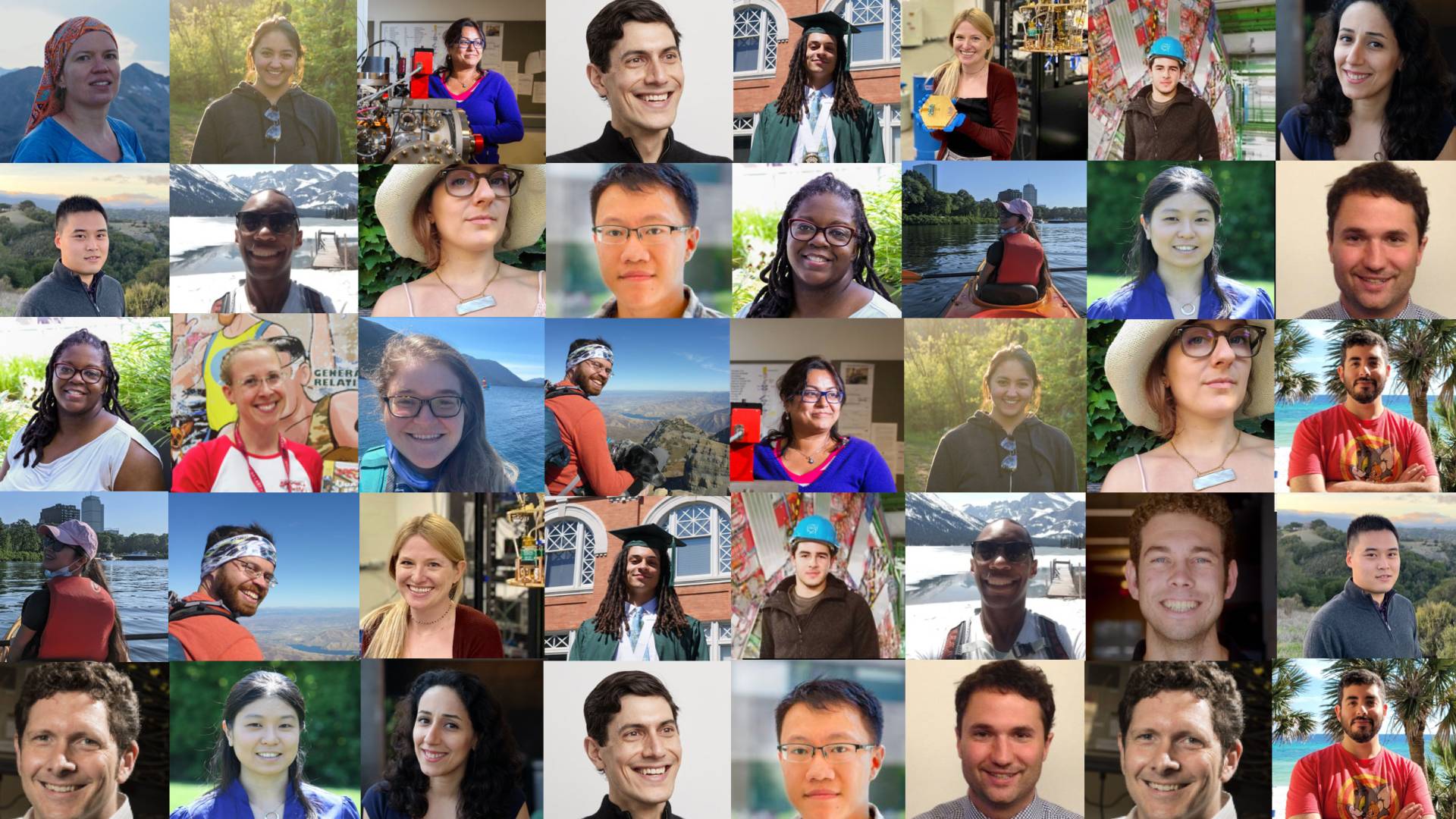 Presenting the modern face of science

Eight members of Princeton's science and engineering faculty took part in a Community of Practice focused on adding diverse voices to course materials. The physicists seen in this collage were contacted by CoP member Kasey Wagoner, who asked them to share their stories and advice with his students.

Whose stories do you tell when you teach science and engineering? Newton? Galileo? Maybe Marie Curie?

That question was posed to eight members of Princeton’s science and engineering faculty as part of their work in a Community of Practice group focused on adding diverse voices to course materials. The professors and lecturers gathered photos of the scientists they taught about, and many were startled to realize just how few women and scientists of color were acknowledged in their lectures and reading lists.

They then took on the work of identifying more diverse voices to incorporate and elevate, from Al-Hasan ibn Al-Haytham (965-1040), who essentially invented the scientific method, pinhole cameras and modern optics 500 years before Galileo, to Marie Maynard Daly (1921-2003), who first identified the link between high cholesterol levels and clogged arteries, to Zia Mian, who is co-director of Princeton’s Program in Science and Global Security and publishes on the danger of nuclear weapons.

“Diversifying the curriculum allows us to make sure that the stories we are telling students reflect the truth, as comprehensive and holistic and inclusive as it actually is,” said Shawn Maxam, Princeton’s associate provost for diversity and inclusion. “It’s not only about ensuring that all of our students can see themselves in the curriculum, though that is a vital part of forming an identity as a scientist or engineer, but it also shows that we acknowledge, venerate and celebrate the contributions of all — not just those who fit old stereotypes about who is a scientist.” 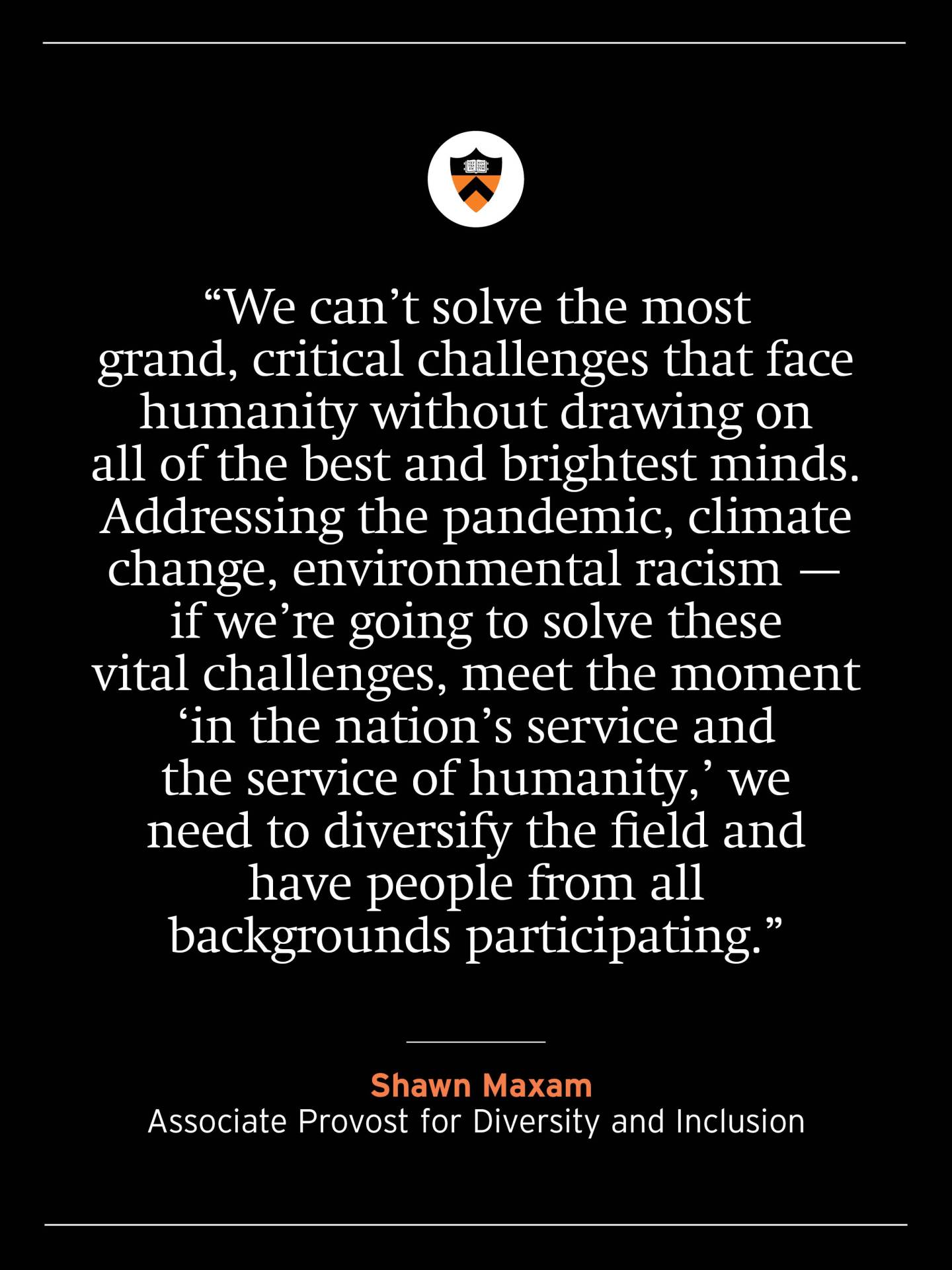 Kasey Wagoner, the Physics 101/102 instructor who was part of the Community of Practice group, reached out to practicing physicists around the world who are women or people of color and asked them to write a brief autobiography that included their career path, their struggles, what they like about physics, any advice they would offer young scientists, and what they do when they're not working.

Physicist Felipe Maldonado wrote, “I think young people look at professors and scientists and figure that they must have been born with prodigious talents. Actually, even the brightest made mistakes, and the road is bumpy for everyone. The difference is that those people never gave up.”

LaToya Anderson, a quantum physicist, wrote, “Given that physics is hard, best believe I struggled in the beginning. It was my creativity, discipline, humility and perseverance from my experience as a Black woman and from studying violin and ballet that’s pulled me through. Now, they are used to learn the fundamentals of the universe. I realized over time that we are all needed in this field, now more than ever, to make new discoveries, improve upon old ones and just be explorers of the universe."

On his final exam, Wagoner asked his students their favorite part of the course. Several students mentioned the biographies. One wrote: “It was inspiring to see biographies of people from different backgrounds, especially minorities, because many minorities do not pursue STEM because they did not see a lot of people that look like them in the field.”

That vicious cycle is hindering our ability to solve the world’s greatest problems, Maxam said.

“We can’t solve the most grand, critical challenges that face humanity without drawing on all of the best and brightest minds,” he said. “Addressing the pandemic, climate change, environmental racism — if we’re going to solve these vital challenges, meet the moment ‘in the nation’s service and the service of humanity,’ we need to diversify the field and have people from all backgrounds participating.”

“It’s kind of a no-brainer” that the photographs of scientists projected onto classroom screens should represent the full breadth of who does science, said Jason Puchalla, a lecturer in physics who teaches a course called Physics for Future Leaders. “But people tend to inherit slides from a variety of sources and not think about it. So having these conversations helped me just take a step back and be aware of it.”

He and his co-teacher Ali Yazdani, the Class of 1909 Professor of Physics, invited diverse guest speakers from within Princeton’s faculty to speak to their students, including Mian from the Program in Science and Global Security and Laure Resplandy, an assistant professor of geosciences and the High Meadows Environmental Institute who investigates climate change.

As a teenager, Yazdani immigrated from Iran to Oakland, California, where he observed first-hand the stark gulf between schools in wealthy and low-income areas. “I grew up in a very, very poor part of Oakland,” he said. “I went to a very challenged high school. I’m not a first-generation college student — my parents are educated — but I definitely experienced the poor opportunities that the U.S. affords to some people.”

He continued: “We need to diversify the STEM pipeline because simply put, you don’t want to miss out on bright people. People with intelligent ideas come from all walks of life.”

Princeton’s Council on Science and Technology (CST) created this inaugural Community of Practice group last year as a step toward helping students from underrepresented groups participate and succeed in STEM courses. The first eight science and engineering faculty members met throughout the 2021 spring semester and made substantial changes to their 2021-22 courses. Members of the second Community of Practice on this topic will be selected shortly; the brief applications are due by Jan. 28.

Part of what makes this approach unique is its focus on curricular rather than pedagogical change, said Sami Kahn, CST’s executive director. Most programs designed to promote diversity in STEM focus on pedagogy — what she calls the how of teaching. “We wanted to explore the curriculum itself, the what of teaching,” she said. “Because ultimately, the readings, cases and examples that are used in courses convey the values of the course. Who is (and isn’t) being represented? Whose stories are being told?” 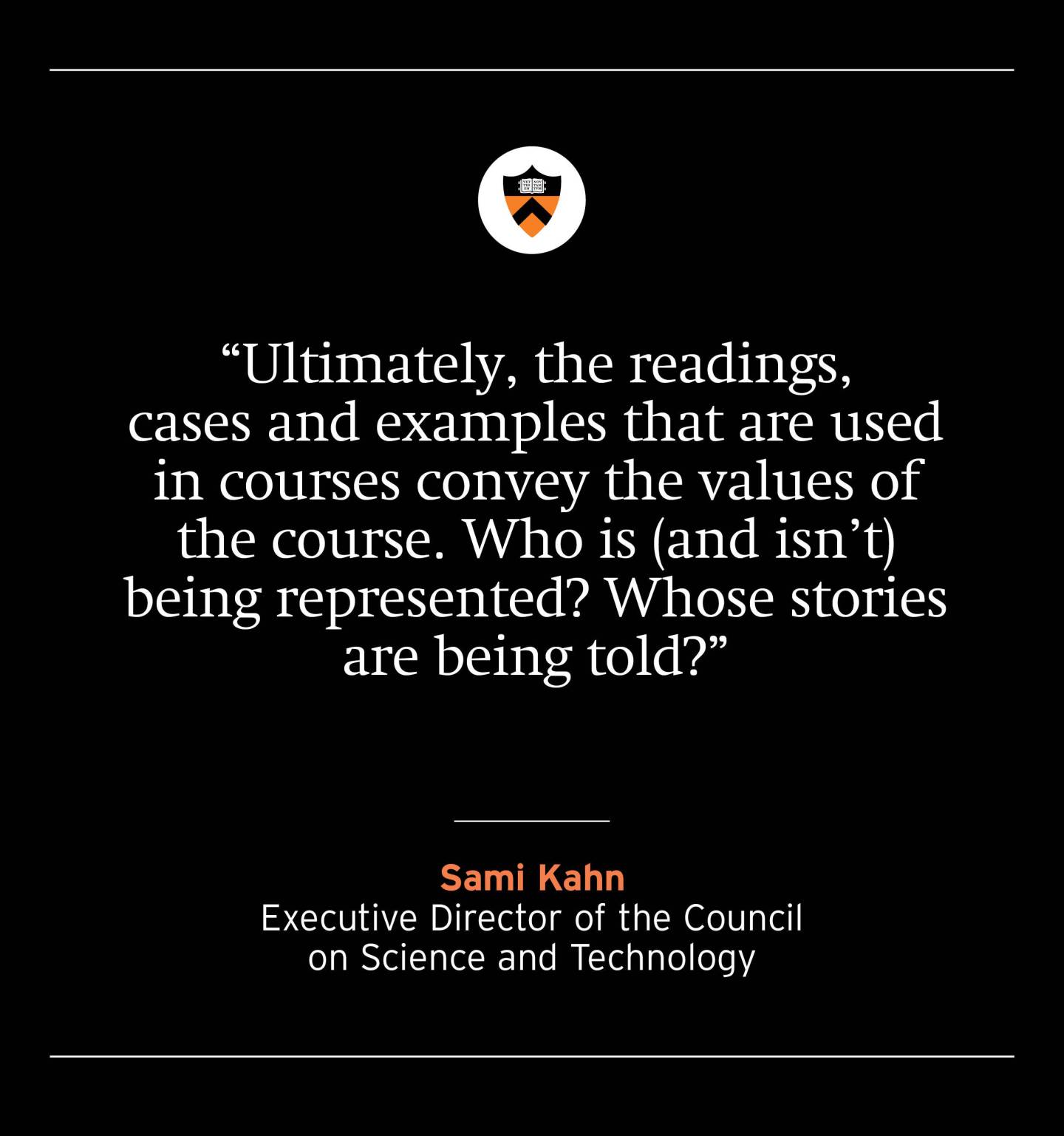 The faculty members and their CST moderators met with Maxam early during the semester to familiarize themselves with current equity-related initiatives at Princeton. “We talked about bringing the same level of curiosity and inquiry into the design of the curriculum that we bring into our own science and scholarship,” Maxam said.

The Community of Practice reviewed research-based strategies to diversify curriculum materials, such as introducing students to the diverse range of people who contribute to scientific discovery, framing scientific discoveries within societal and historical contexts, and illustrating core concepts with examples that have personal or cultural relevance to students.

Each of these approaches has been shown to help students persist and succeed in science and engineering coursework.

For Puchalla, the most valuable piece was the shared community that he could brainstorm and learn with. “It was so helpful to have a group all focusing on the same thing, to have a team of people to bounce ideas off of, to share ways that we can move forward,” he said. “The most practically useful aspect was hearing immediate feedback, like ‘Maybe try a different direction,’ or ‘That’s great, I’m going to incorporate something similar in my class.’”

One way to diversify who is highlighted in a course is to focus on recent developments instead of the origins of a field, noted Lamyaa El-Gabry, a lecturer in mechanical and aerospace engineering. She created a two-week lab on biofuels for her course so she could feature people of color who are breaking new ground in biofuel research, such as kelp scientist Diane Kim and biomass engineers Tumpa Sarker and Michael Harrington, the CEO of a peat biofuel company.

“Outside of course changes and additions, I am more aware of the issues and have done my best to support underrepresented students through mentoring, including attending Take Your Professor to Dinner and just ad hoc lunches with students,” she said. “I realized through these more informal interactions that the struggle is real, and I think being alerted to that through the Community of Practice makes me a more effective mentor.”

At the culmination of the spring semester, each fellow proposed significant changes they would make to their own course curriculum to promote diversity. Proposed changes included infusing real-world and student-generated examples, discussing global problems affecting people beyond Western cultures, spotlighting underrepresented innovators, diversifying authors of readings and researchers featured in lectures, and exploring public policy impacts on equity and technology.

Zoom photo courtesy of the Council on Science and Technology

While the faculty members of the Community of Practice were working on their proposed course revisions over the summer, the CST also hired five undergraduate student research interns. In addition to supporting the faculty in their efforts, the students developed a repository of diverse materials, including case studies and discipline-specific examples, both modern and historical.

As part of their work, the students are creating a Scientist Spotlight database that highlights diversity in science and engineering. It includes ibn Al-Haytham and Daly, along with William Augustus Hinton (1883-1959), a Black doctor who developed a test for syphilis used by the U.S. public health service; Alan Hart (1890-1962), a transgender man who pioneered using X-rays to detect tuberculosis; Hedy Lamarr (1914-2000), an actress and inventor who developed frequency-hopping technology for Allied torpedoes during World War II; and many others.

“This summer has immensely helped me to gain a new perspective on the challenges to, and possibilities for, diversifying STEM,” said Tori Edington, a senior physics major. “I am so excited to take what I’ve learned through this internship and use it to plant seeds of change.”

Community of Practice members gathered weekly on Zoom through Spring 2021 to discuss research-based strategies to improve the range of voices featured in their curriculum materials. From left: (bottom row) Forrest Meggers, an associate professor of architecture and the Andlinger Center for Energy and the Environment; Ali Yazdani, the Class of 1909 Professor of Physics; Stefana Parascho, then an assistant professor in the School of Architecture; (middle row): Kasey Wagoner, a lecturer in physics; Lamyaa El-Gabry, a lecturer in mechanical and aerospace engineering; Marcus Hultmark, an associate professor of mechanical and aerospace engineering; Jason Puchalla, a lecturer in physics. (top row): Paul Durst, then an assistant director for STEM education at the Council on Science and Technology (CST); Sami Kahn, executive director of CST; Penelope Georges, an assistant director and lecturer at CST; and Celeste Nelson, the Wilke Family Professor in Bioengineering and a professor of chemical and biological engineering.

Zoom photo courtesy of the Council on Science and Technology

The curriculum materials assembled by the students and the curriculum changes put in place by the faculty members are all steps in the right direction, said Maxam. “To be frank, this is hard work,” he said. “It requires a lot of effort to disrupt the status quo, change old habits, change norms, change practices. But at Princeton, we don’t shy away from rigor. We’re willing to face hard problems head on. I believe and know we are committed to doing it.”