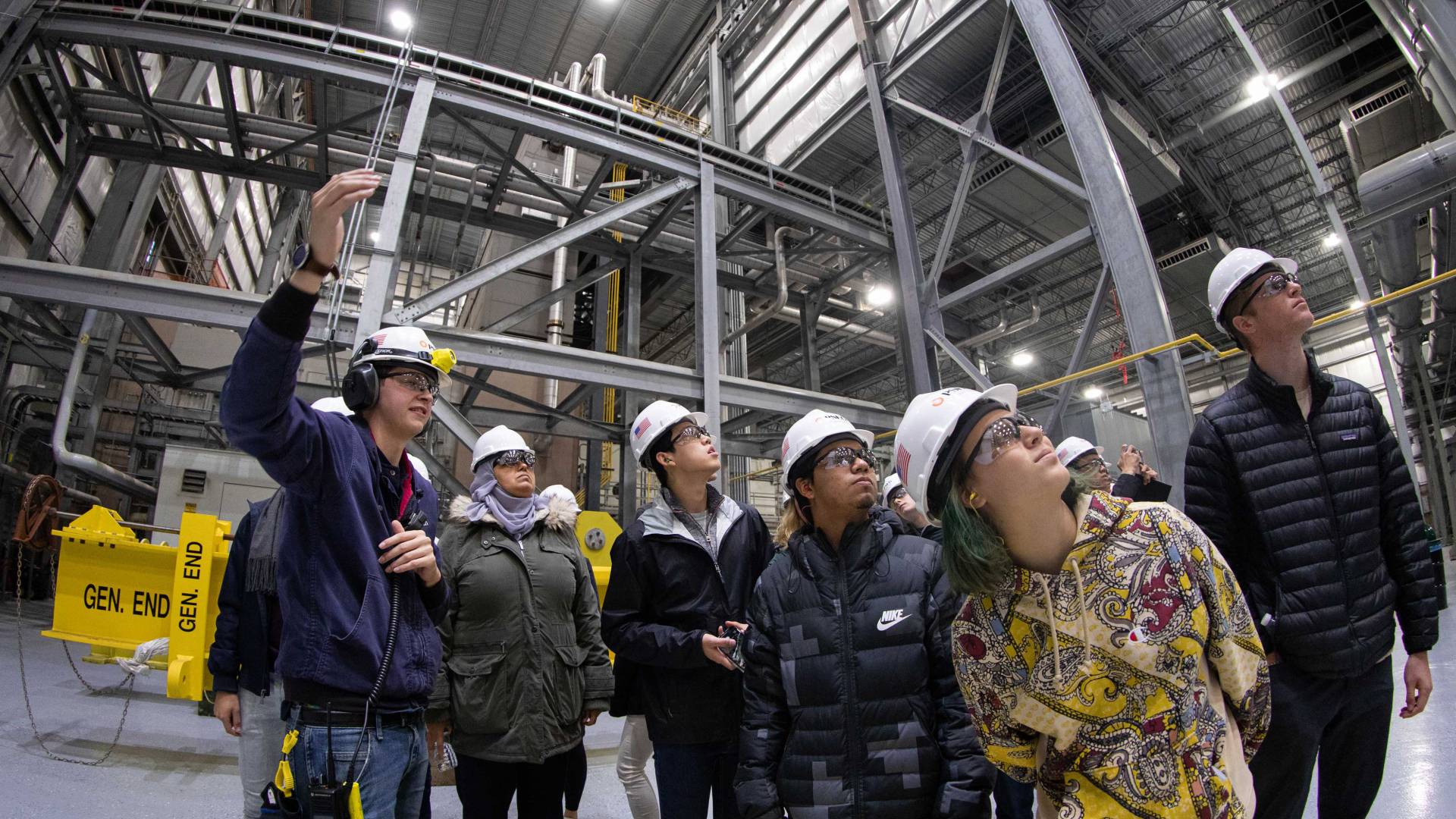 Traditionally, engineering students have learned about the thermodynamics of gas turbines by studying diagrams and solving equations, but this year they also donned hard hats, safety glasses and ear plugs to tour a plant that produces electricity for half a million homes. 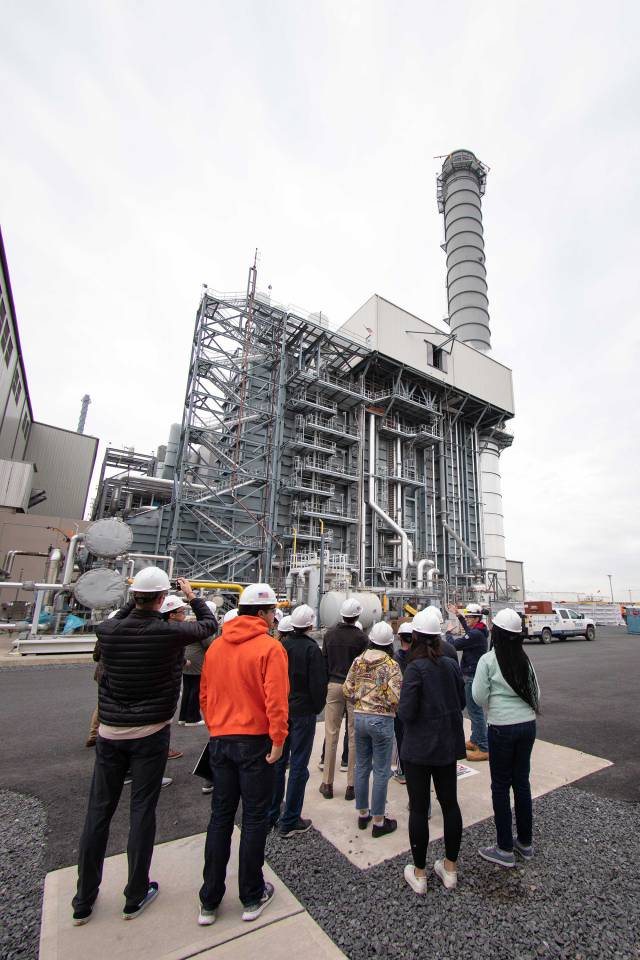 The power plant’s heat recovery steam generator made a big impression on students: At 130 feet tall and weighing 8 million pounds, it was built at a port along the Hudson River near Albany, New York, and brought down to the Sewaren plant on a barge.

Long seen as a rite of passage for sophomores concentrating in mechanical and aerospace engineering, the thermodynamics course is known for its rigor. Making its content feel relevant for students can be a challenge. This year, the class became a Campus as Lab course, featuring field trips, guest lectures and lessons that enhanced students’ learning with examples of energy technology and policy from the University campus and surroundings.

In addition to visiting the Public Service Enterprise Group (PSEG) generating station in Sewaren, New Jersey, about 30 miles from Princeton, students joined professional engineers to assess the energy efficiency of the Pink House, home to a community of undergraduates focused on sustainable living. Guest lecturers included an engineer who helps design gas turbines for extreme conditions and a contributor to the town of Princeton’s Climate Action Plan to reduce carbon emissions.

“In the past, I would present all the theory and then talk about applications at the end,” said course instructor Lamyaa El-Gabry, a lecturer in mechanical and aerospace engineering (MAE). But she worried that students were “sitting there getting heaps of equations,” waiting to learn about “the cool stuff.”

El-Gabry revamped the course with a focus on local dimensions of global energy issues, building connections both on and off campus with help from campus sustainability manager Caroline Savage (now the program director for Princeton Internships in Civic Service at the Pace Center for Civic Engagement) and Leah Anderson, associate director of the Program for Community-Engaged Scholarship. 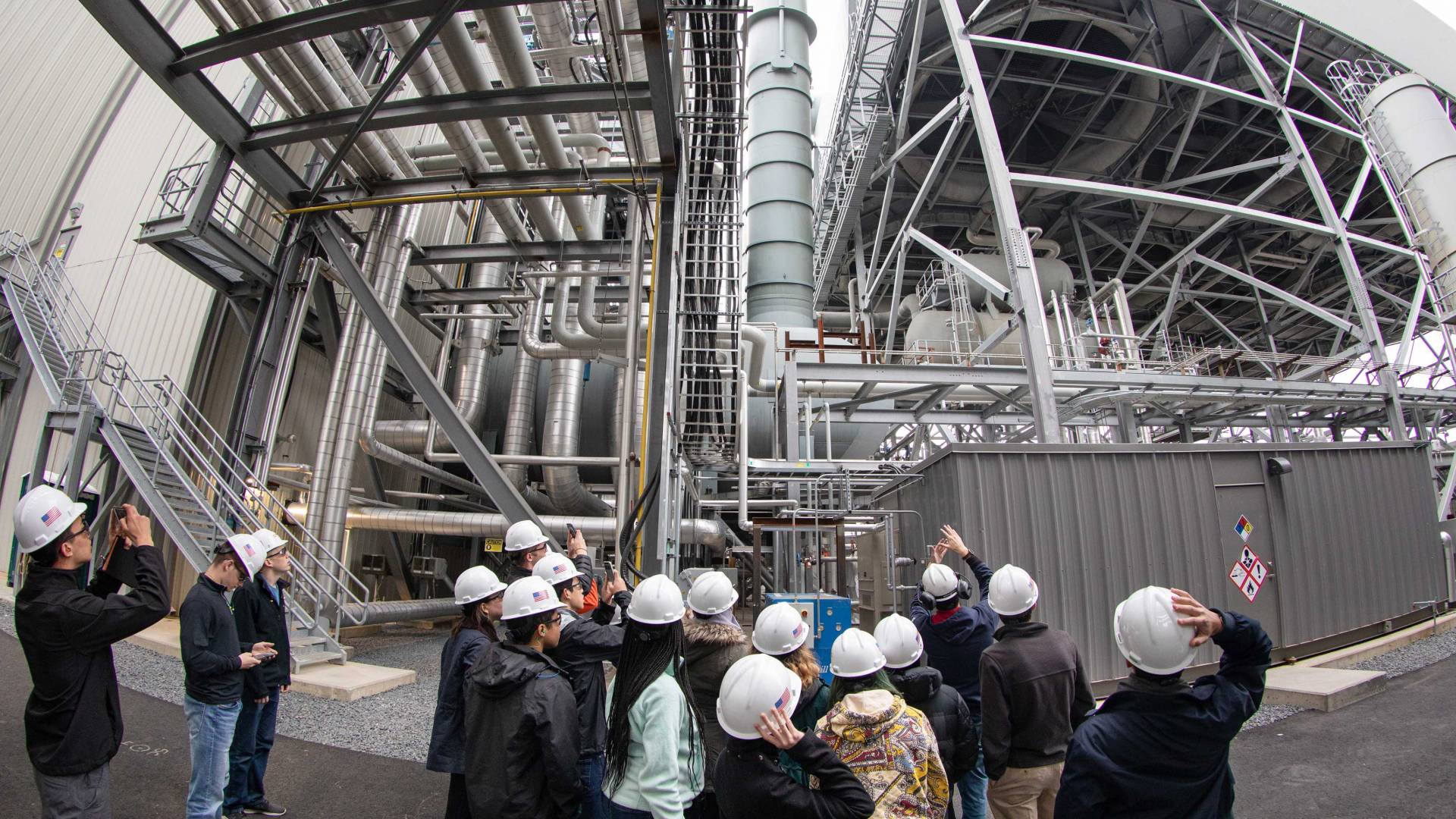 Inside the heat recovery steam generator’s air-cooled condenser, students gaze up at mazes of tubing and rows of giant fans that force steam to condense into liquid water — a feature that eliminates the need to cool the plant using river water.

“This is the students’ first look at engineering” after their introductory math and physics courses, said El-Gabry. “Thermofluids can feel very conceptual and theoretical: You can’t see heat, you can’t see air flow, even though air flows all around us. So, I thought I could make it more interesting and exciting by reformulating the presentation to suit the needs of solving a problem.”

El-Gabry also extended the scope and timeline of the students’ independent research projects. During the last five weeks of the course, groups of students proposed and carried out experiments on topics of their choosing. Projects included a comparison of commercial and homemade motors and fuels for model rockets, and an assessment of the heat-insulating properties of different wood varieties — a topic inspired by the class’s energy audit of the Pink House.

“By exposing [students] to enough real-world problems, I hope that they can look at an engineering problem and break it down into something they can solve with the laws of thermodynamics,” said El-Gabry. “It’s a really important skill.”

During the power plant visit, PSEG engineer Christian Santoro outlined the plant’s combined-cycle system: Natural gas powers the gas turbine, and a heat recovery steam generator captures the gas turbine’s exhaust to drive a steam turbine that generates additional electricity. The plant, which began operating in June 2018, is typical of newer power stations. Its combined-cycle setup allows it to reach 60% thermal efficiency, meaning that 60% of the heat energy input is converted to electricity, versus about 40% for a gas turbine alone.

The heat recovery steam generator made a big impression on students: At 130 feet tall and weighing 8 million pounds, it was built at a port along the Hudson River near Albany, New York, and brought down to the Sewaren plant on a barge. Inside the unit’s air-cooled condenser, students gazed up at mazes of tubing and rows of giant fans that force steam to condense into liquid water — a feature that eliminates the need to cool the plant using river water.

In the control room, students saw the plant’s critical alarm screen and computerized systems that constantly monitor and adjust the turbines’ output — in previous iterations of the plant, technicians told the students, this was all done manually. On the November afternoon of their visit, the systems showed that the plant was generating 542 megawatts of power — close to its maximum capacity.

Student Shannen Prindle was fascinated by the workings of a nearly new power plant, and found the control room particularly interesting. “The field trips and coursework introduced a side of MAE that’s less widely thought of” compared to aerospace engineering, said Prindle.

Classmate Miles Simpkins added that he enjoyed the course’s “hands-on analysis of real systems,” including jet engines and power plants. The course was “a great introduction to how I might want to specialize in the future,” he said. 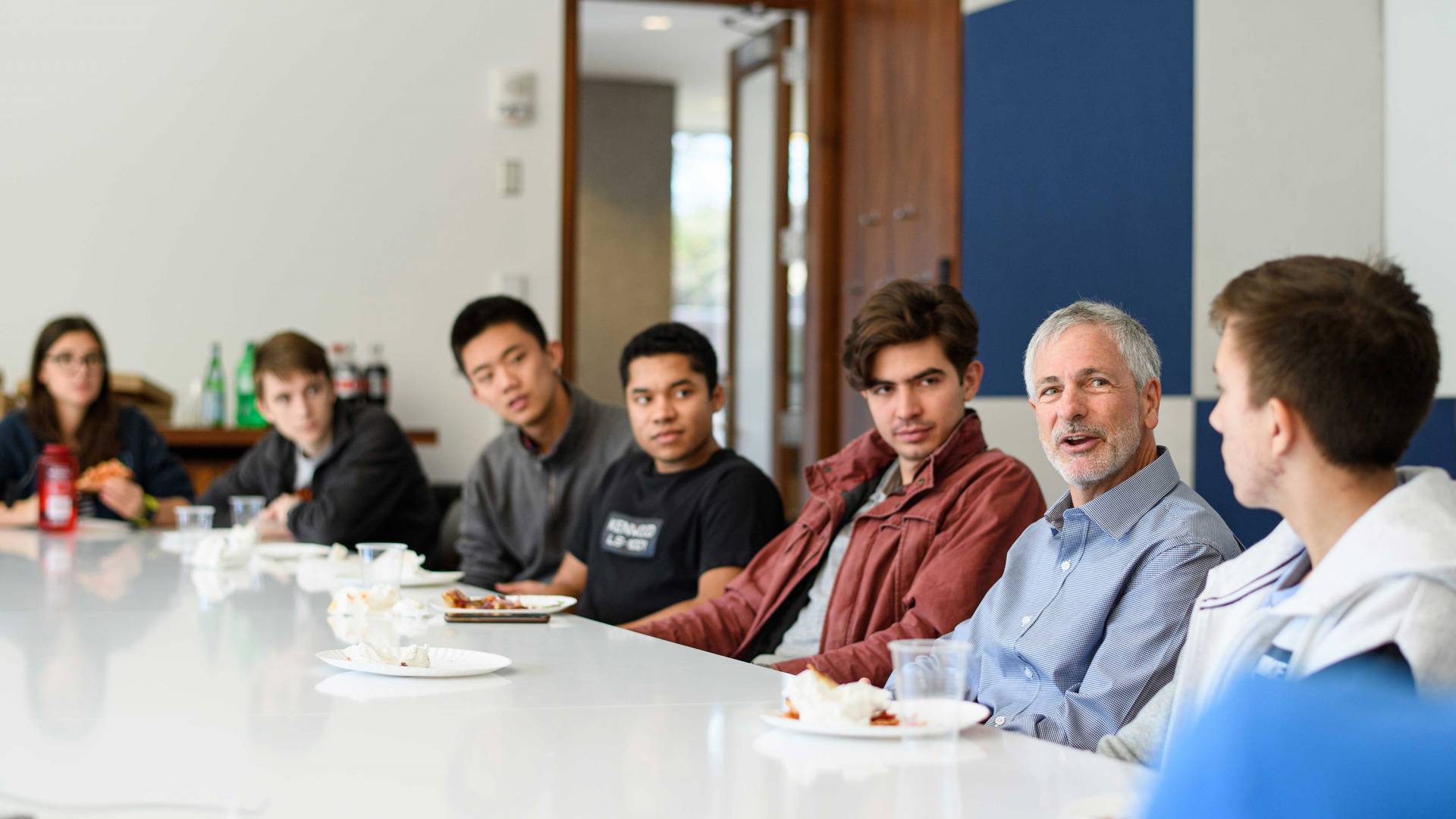 Mike Fox (second from right), manager of heat transfer engineering at Solar Turbines, came to Princeton to give a guest lecture and talk with students over lunch.

During the same week as the power plant visit, Mike Fox, manager of heat transfer engineering at Solar Turbines (named for the sunny weather in San Diego, where it was founded as an aircraft company in 1927), came to Princeton to give a guest lecture and talk with students over lunch. Supporting the course’s core content, he presented the basic dynamics of gas turbines, passed around models of turbine parts and shared examples of projects he worked on — including specially designed turbines that use unconventional fuels or stand up to the salty environment at sea.

“By interacting with real engineers in the field, [students] notice differences in their interest in the bottom line, how they speak, what they care about, and what they present in terms of theory and graphs in commercial language,” said El-Gabry, who worked as an engineer at General Electric Co. before beginning her academic career. “Having an opportunity to interact with that spectrum of engineers” is an important aspect of students’ learning, she said.

Students also worked with engineers from Princeton Air, a local, family-owned firm, to audit the energy efficiency of Pink House, which is part of Forbes College, one of Princeton’s six residential colleges. The audit involved a blower door test, which used a powerful fan to create a vacuum inside the house and then measured air leaks from the windows and doors to identify ways to reduce the building’s energy use for heating and cooling.

Many students used their independent projects to further pursue practical questions of energy efficiency. One group built a model hot air heat exchanger to test a method of increasing heating efficiency by capturing heat that would otherwise be wasted — for example, the exhaust from a clothes dryer. Another group designed a device to measure the heat-insulating properties of different wood varieties. In their setup, cedar wood allowed less heat to escape than fir or pressure-treated pine, which is commonly used in building frames. 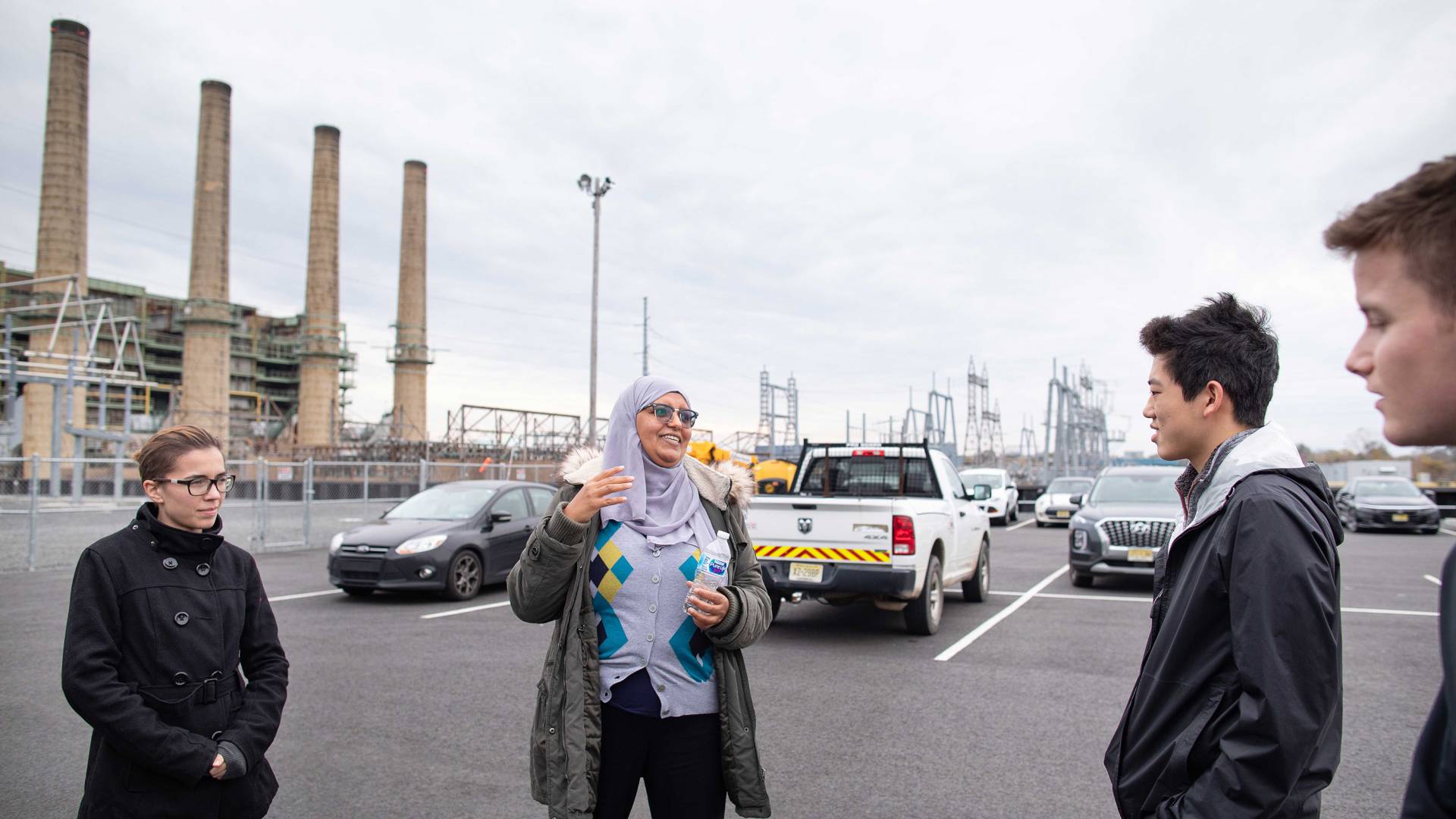 Instructor Lamyaa El-Gabry (center) talks with students and assistant in instruction Claudia Brunner (left) after touring the PSEG power plant in Sewaren, New Jersey. Smokestacks from a decommissioned power plant are visible in the background.

Thomas Van Liere, who worked on the project comparing wood varieties, said he appreciated that the course was “more than just math. We learned about practical applications in industry, and jobs where we might use this knowledge.”

“When Princeton students are doing something entrepreneurial to save money or save energy, out of their own prerogative — not just to solve a problem set — they are self-driven,” said El-Gabry. “Then you get really great work.”

In addition to the Department of Mechanical and Aerospace Engineering, the fall 2019 thermodynamics course received support from Princeton’s Class of 1972 Teaching Initiative through the 250th Anniversary Fund for Innovation in Undergraduate Education, the Program for Community-Engaged Scholarship, the McGraw Center for Teaching and Learning, and the engineering school’s William Pierson Field lecture fund. Campus as Lab is a research and teaching program of the Office of Sustainability.