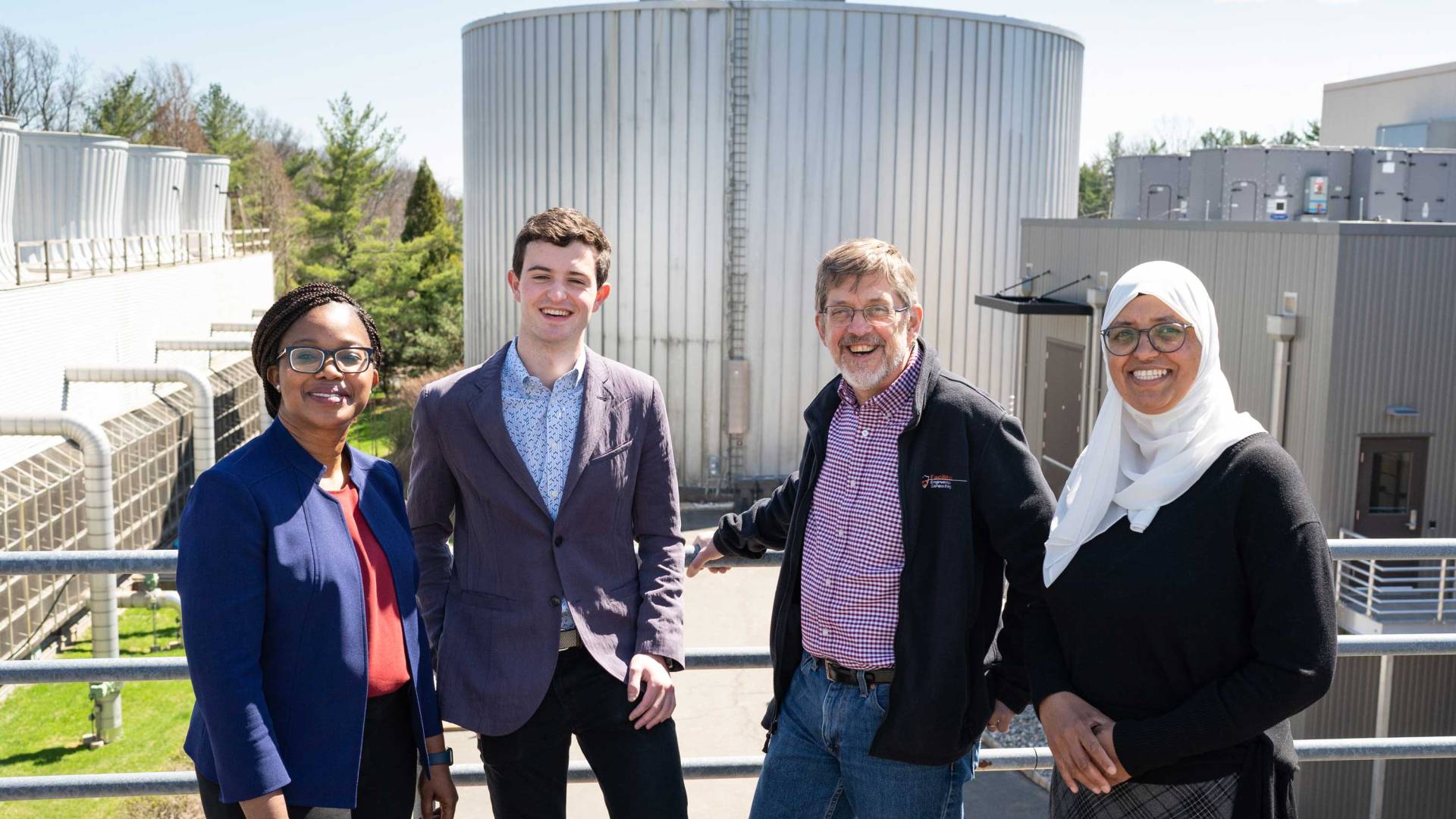 Princeton senior Harry Shapiro (second from left) developed a mathematical model to help reduce costs and carbon emissions from campus energy use. He worked with (from left) Ijeoma Nwagwu, assistant director of academic engagement and Campus as Lab initiatives at the Office of Sustainability; Ted Borer, director of the campus energy plant; and his thesis adviser Lamyaa El-Gabry, a lecturer in the Department of Mechanical and Aerospace Engineering.

Harry Shapiro was six when he first toured the plastics factory his father managed near their home in Chicago. He walked out with a spark of attraction for industrial plants that he carried with him to Princeton University.

In his first semester on campus in 2018, Shapiro toured the University’s energy plant, where he marveled at the “genius and brilliance” of how the plant’s different components fit together to supply much of the campus’s heating, cooling and electricity.

Now, for his senior thesis project, Shapiro has synthesized more than two million data points on campus energy use, developing a mathematical model to help reduce costs and carbon emissions. The model aims to optimize the University’s hour-by-hour dispatch of its various energy sources — an increasingly complex challenge as Princeton moves toward its goal of net-zero carbon emissions by 2046.

The energy plant tour was part of the mechanical and aerospace engineering (MAE) department’s core thermodynamics course. Lecturer Lamyaa El-Gabry has taught the course at Princeton since 2017 and has incorporated many Campus-as-Lab elements in partnership with Princeton’s Office of Sustainability.

The course solidified his decision to concentrate in MAE and deepened his thinking about how to make systems more efficient, said Shapiro, who is also earning certificates in the history and practice of diplomacy, engineering and management systems, and robotics and intelligent systems.

During his time at Princeton, Shapiro was the captain of the Model United Nations Team and the treasurer of the Princeton Rocketry Club, and is also a light aircraft pilot. He was awarded the Shapiro Prize for Academic Excellence twice for the 2018-19 and 2019-20 academic years. The prize is endowed by Princeton University President Emeritus Harold T. Shapiro (no relation) to “recognize outstanding academic achievement by first-year and second-year students and to encourage continued serious engagement in intellectual pursuits.”

The creative appeal of efficiency

“Designing for efficiency is my favorite part of engineering. Princeton could put an A/C unit in every window of every building, or a jet airliner could have six engines on it, but that’s not exciting or challenging,” said Shapiro. The thermodynamics course showed him “how to be creative and make the most out of every ounce of energy that you’re producing — how to not be wasteful.”

When it came time for a senior project, Shapiro said, he “immediately thought back to that plant tour.” He asked El-Gabry to serve as his adviser, and they met with campus energy plant director Ted Borer and other Facilities staff members to explore research ideas that could impact the campus’s day-to-day energy operations.

“This gave Harry a chance to work with real-world data that has an immediate engineering need,” said El-Gabry. “Trying to solve a sustainability problem related to national or global policy is not as tangible as collecting data from the campus where you’ve lived and studied. He wanted that as part of his final experience at Princeton.”

Toward the end of the fall semester, Shapiro was enjoying the work so much that he decided to extend the initial one-semester project into a full-year thesis.

“He’s very driven,” said El-Gabry, adding that Shapiro frequently emails her with new ideas and research questions. “He has a high energy level, and it’s been sustained for the whole duration of the thesis.”

A model for the push toward net-zero

The University uses its own gas turbine-powered cogeneration plant and solar collector field, along with external grid energy, for electricity, heating and cooling. To increase the campus’s energy efficiency and sustainability, workers have been drilling hundreds of bores up to 850 feet deep to serve as geo-exchange wells.

The wells store heat created by cooling campus buildings during the warmer months, which can be used for heating during colder weather. Geo-exchange heat pumps and controls, and tanks to store water for heating and cooling campus, will be housed in the TIGER and TIGER CUB buildings, set to be completed in 2023.

“For Princeton, [Shapiro’s] model speaks to not just the present energy system we have, but also the future and our efforts to get to net-zero,” said Ijeoma Nwagwu, assistant director of academic engagement and Campus as Lab initiatives at the Office of Sustainability. The model “is factoring in things that are very much top of mind for us, such as carbon emission reduction and how increased solar capacity will play a role,” said Nwagwu, who advised Shapiro on the research.

To create the optimization model, Shapiro used a large data set including: records of recent campus energy use; information on the economic and carbon costs of generating electricity in a natural gas-powered turbine; data on heating and cooling with steam from the turbine’s exhaust; and records of electricity purchased from utilities.

He primarily used data from before the COVID-19 pandemic, which drastically altered energy demand on campus in 2020 and 2021. He also factored in projections of the output and efficiency of the geo-exchange-linked TIGER Plant. (Real-time and historic data on campus electricity supply and demand are available on the Tiger Energy site.)

Harmonizing 'instruments' in the energy orchestra

Borer, the energy plant director, said the research was complex because the University designed its energy system to include a variety of systems with overlapping roles. He said the different systems -- the turbine, the solar field, the exhaust power -- were like “instruments in an orchestra.”

“Sometimes we need all of them,” Borer said. “But when it’s not the hottest day or the coldest day of the year, we don’t need all the instruments.”

The plant operators have to balance economics, reliability and emissions against power demands that fluctuate constantly depending on needs across the campus. With major industrial equipment heating up and cooling down, “it becomes a very complex economic problem,” Borer said.

Shapiro developed new software to wrestle with those details. At the same time, he emphasized that the software is modular, with the ability to add capacity for geo-exchange or other new energy sources, and to test different pricing scenarios for natural gas, grid energy and carbon emissions.

In his analysis, Shapiro used a price of $228 per metric ton of CO2 emitted, an industry-leading standard. “We can price our carbon emissions in a way that makes it economically competitive to be green, and that’s what’s exciting about what Princeton is doing,” said Shapiro. “They’re not incompatible with each other: We get the carbon savings and the energy savings at the same time. This is what I love so much about optimization.”

With the TIGER and TIGER CUB facilities fully operational, Shapiro’s model estimates that strategically dispatching its energy sources could save the University up to 36% in carbon emissions and 20% in costs compared to 2018-19.

His work has helped validate some of the design assumptions made in the planning of the TIGER plant’s use, and “has helped us challenge our own thinking,” said Borer. The University currently uses a dispatch model developed by an outside engineering firm, but it informs, rather than dictates, decisions, as safety and reliability are also primary concerns for campus energy, Borer added.

Borer said this type of model could be useful to other universities, or any district energy system such as an airport, hospital or municipality that has its own central energy plant and is working to incorporate renewable energy sources.

For Shapiro, along with building the model itself, the process of communicating his ideas to different audiences and refining his work based on their feedback has been a valuable aspect of the thesis experience. He has presented his research to Facilities staff, the Princeton Sustainability Committee and engineers from Icetec Energy Services, the firm that developed Princeton’s current dispatch system.

“There’s a sense of character and leadership that we aim to nurture in students through their educational experience — the ability to engage with people across cultures respectfully and meaningfully,” said Nwagwu. “One thing that’s really stood out for me about working with Harry is the quality of this human interaction.”

This fall, Shapiro will begin his career as an analyst at Sycamore Partners, a private equity firm in New York City, where he said he looks forward to “building the business side of my skill set. I’ve had four years [at Princeton] learning a lot of engineering and communication skills, and now I want to take that to the real world to learn how to run a business, how to invest and how to collaborate with people in that world.”