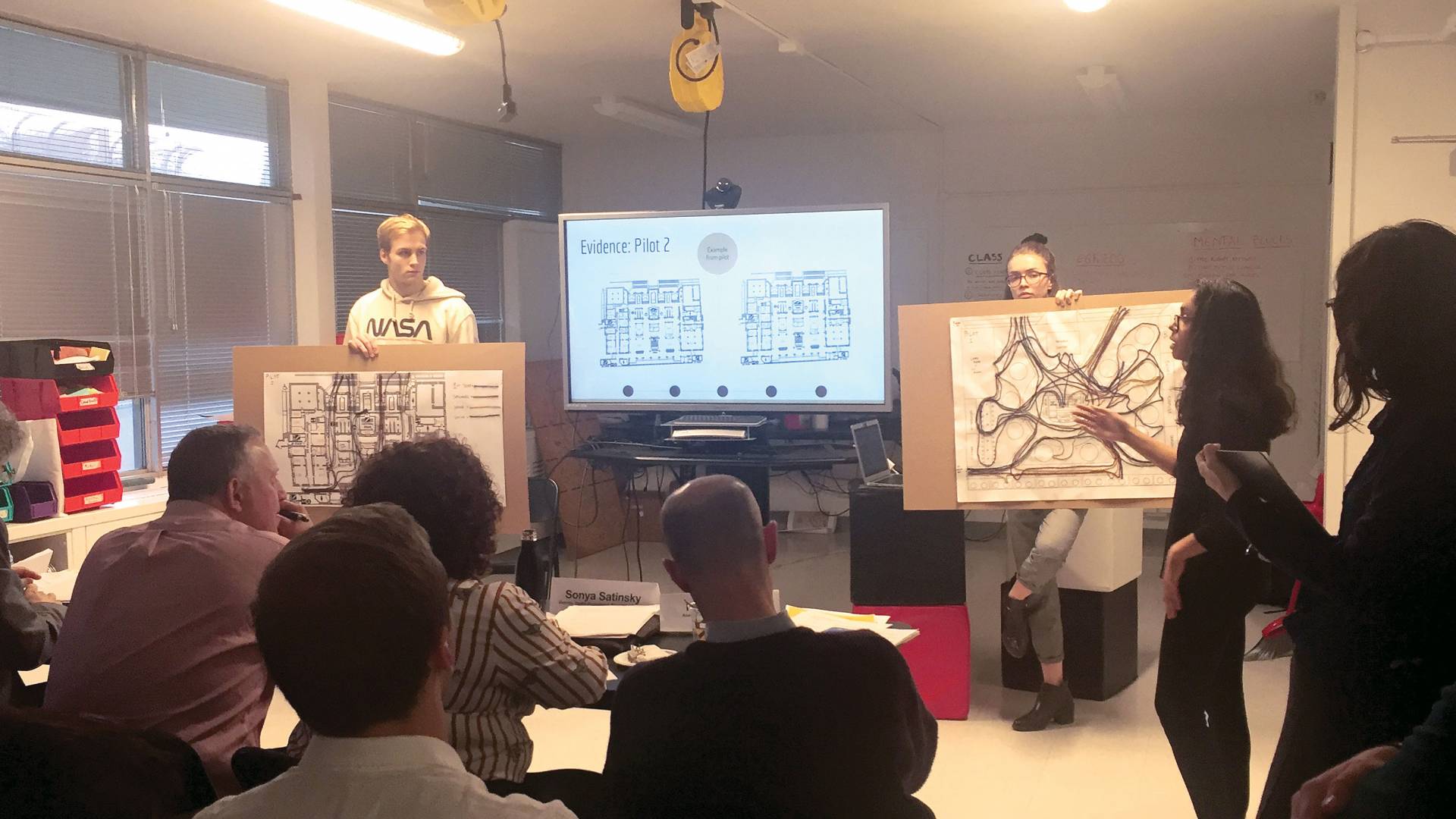 Princeton is addressing student health and wellbeing from multiple directions, in the curriculum and beyond. Last semester, the University launched TigerWell, a collaborative, cross-campus health, wellbeing and resilience initiative that coordinates existing resources with creative new approaches. The class “Creativity, Innovation and Design” highlighted one of these creative approaches by focusing on the topic of loneliness. Shown here, students make their final presentations to health officials on how to mitigate loneliness on campus.

Set aside your sepia-toned visions of what a Princeton classroom looks and sounds like. The walls of the “Creativity, Innovation and Design” class are crammed with colorful stick-on notes that document freewheeling brainstorming sessions, and students buzz among the dozen stand-up whiteboards that divide half the rectangular room into mini cubicles.

Student teams have filled the whiteboards with ideas related to the semester’s topic. Sheila Pontis, a lecturer in electrical engineering and the Keller Center for Innovation in Engineering Education with a background in design and research, instructs the teams to examine their neighbors’ proposals. Their assignment is not to judge but rather to take the other group’s original idea one step further — by building upon it or reframing it. The exercise is so collaborative and the students so invested that the subject might surprise you: loneliness.

“When I said the topic of the class was going to be loneliness, practically all the students were like, ‘Oh this is so cool. We are going to be able to talk about this,’” Pontis said. 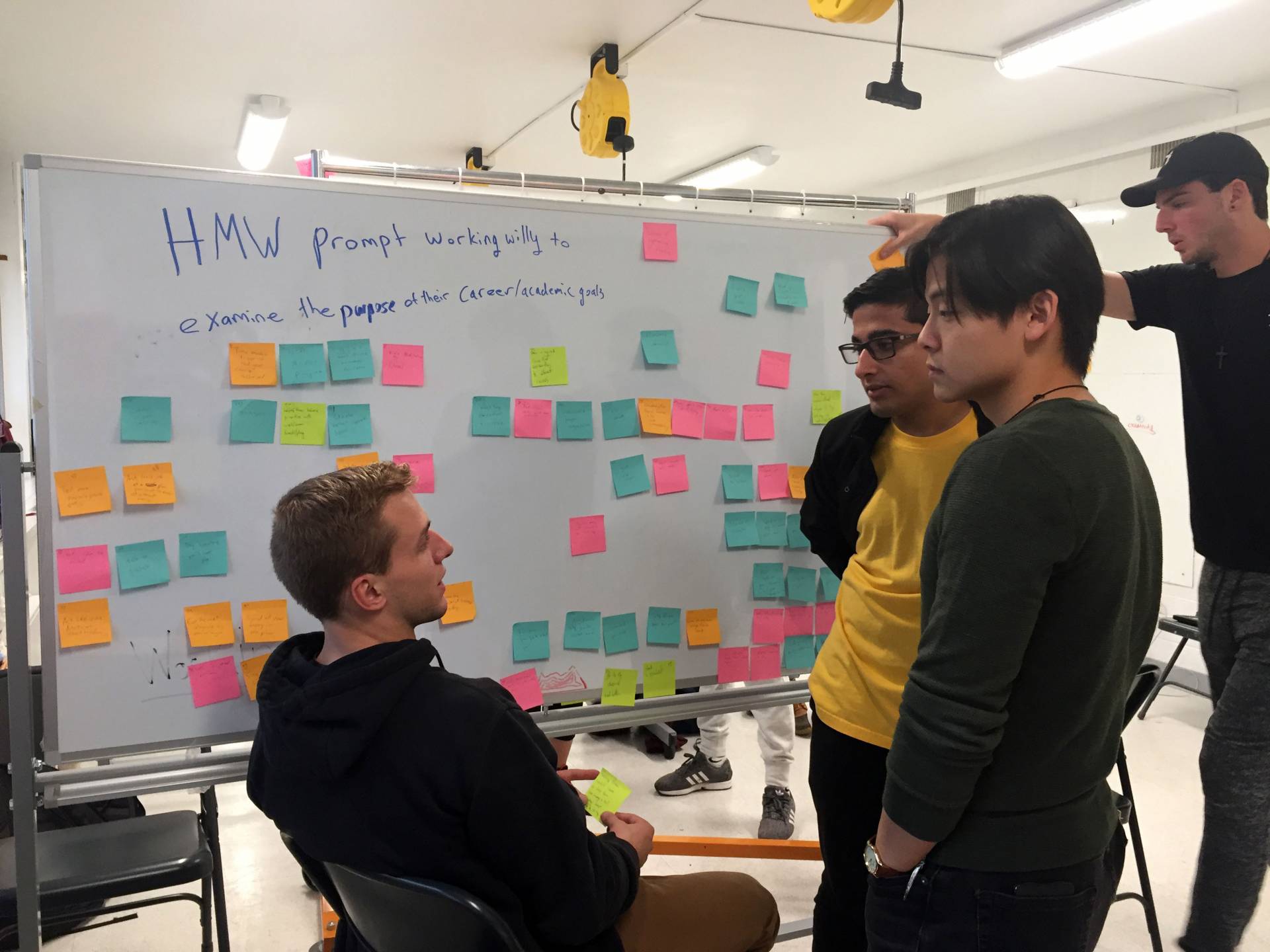 A student team brainstorms ideas on how to balance success with purpose.

Princeton is addressing student health and wellbeing from multiple directions, in the curriculum and beyond. Last semester, the University launched TigerWell, a collaborative, cross-campus health, wellbeing and resilience initiative that coordinates existing resources with creative new approaches.

“Wellbeing is more than just the absence of being ill,” said W. Rochelle Calhoun, vice president for campus life. “It’s having a positive health identity, being proactive about your health and wellbeing, and thinking about not just getting through, but about actually thriving and flourishing.”

Providing students and staff with the right tools to maintain wellbeing and develop resilience is essential, and TigerWell aims to provide multi-layered support and increased campus connectivity. Those efforts include the hiring of a project manager, who will coordinate and amplify awareness of the available support programs, and two new mental-health counselors. They will split their time between the McCosh Health Center and strategic satellite locations on campus, like the residential colleges and Jadwin Gymnasium, to connect with more students.

“If we can be at these other sites where students are already hanging out and spending time, maybe this will make it more likely for someone who’s reluctant to come into McCosh Health Center to actually get the help they need,” said Calvin Chin, director of Counseling and Psychological Services (CPS). 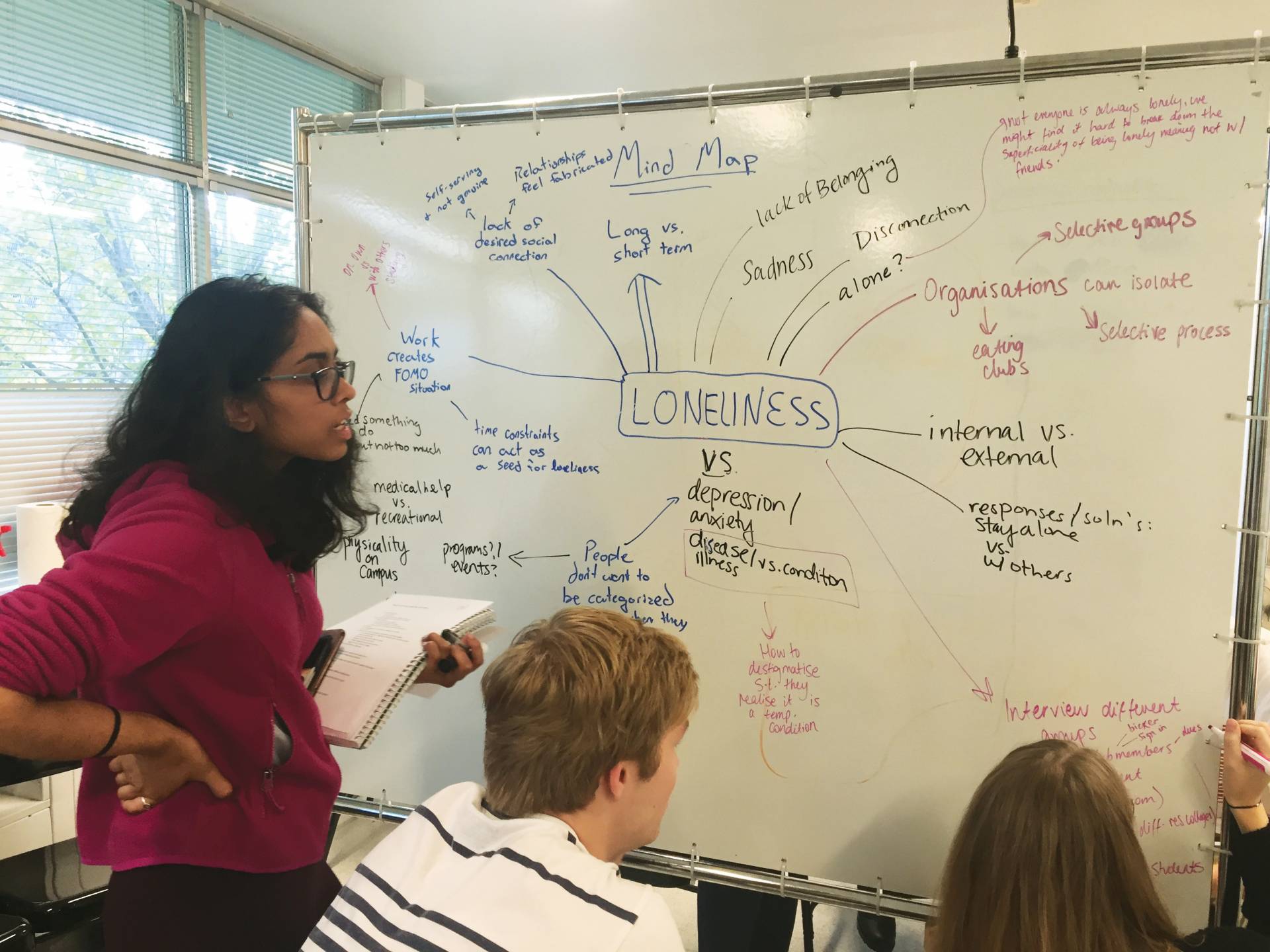 Students dissect the links between loneliness and depression.

Across America’s universities, this is a time of heightened awareness about student wellbeing. More than 40 percent of college students reported that they felt so depressed in the previous year that it was difficult for them to function, according to the most recent American College Health Association survey.

Senior Rachel Yee, who just completed her term as president of the Undergraduate Student Government (USG), made mental health a key focus of her campaign and of her leadership agenda. “My vision,” she wrote in her bio on the USG website, “is to recognize the needs of the student body and to fill them. That means improving the way we talk about and provide resources for mental health. We need to change the narrative on campus.

“People are really, really intelligent here, and everyone around you seems like they’re perfect, so it can feel like you’re the only one who’s struggling,” Yee said in an interview. “I saw a lot of people who were going through many of the same things and the same struggles that I was. This was a way to destigmatize mental health, and also to get in front of the administrators who would be able to implement the changes that would lead to increased support that students need.”

Pontis observed similar signs. She selected the subject of loneliness for her class after witnessing some of her previous students struggle. “They’re so focused on first getting here, and then doing what they think society wants them to do, that they forget that this is their lives,” she said.

Technology can be a complicating factor as well. For all the connectedness they deliver, smart devices and online media can also be socially isolating. “We’ve become so much more disconnected from individuals because of devices, but also disconnected from ourselves because we are spending so much time on devices that there isn’t time to unplug, reflect and recharge,” said Calhoun. “There’s research emerging about kids who’ve now been on devices all of their life, and it’s showing us that being on social media is not necessarily a good confidence builder — and can be socially isolating.”

In the class, ethnographic research informs the design thinking process: prior to the brainstorming exercise, each team interviewed around 20 Princeton undergraduates not related with the class to help shape their ideas. “They are taking the topic as an opportunity, to apply the class concepts to understand more about themselves and also to apply them outside the class,” Pontis said.

At Princeton, the administration and University Health Services had long wanted to pursue innovative approaches to student health in the digital age. The catalyst for action was a well-timed gift from the Elcan Family Fund for Wellness Innovation, a game-changer that enabled the University to put new initiatives like TigerWell into practice. Over the next five years, the University is positioned to build a wellness ecosystem that permeates the campus, providing students with more accessible and more responsive services.

The new support has also enabled Princeton to foster further professional development on the most advanced wellness issues, inviting experts to campus to share their insights. Kristin Neff, associate professor of educational psychology at the University of Texas at Austin, was TigerWell’s inaugural lecturer. Her topic was “The Science of Self-Compassion.” “Self-compassion is learning to treat ourselves the way we treat our good friends,” Neff told an audience of students and staff at the Friend Center on Nov. 8.  “Self-compassion also enhances grit, the tendency to persist in the face of obstacles.” 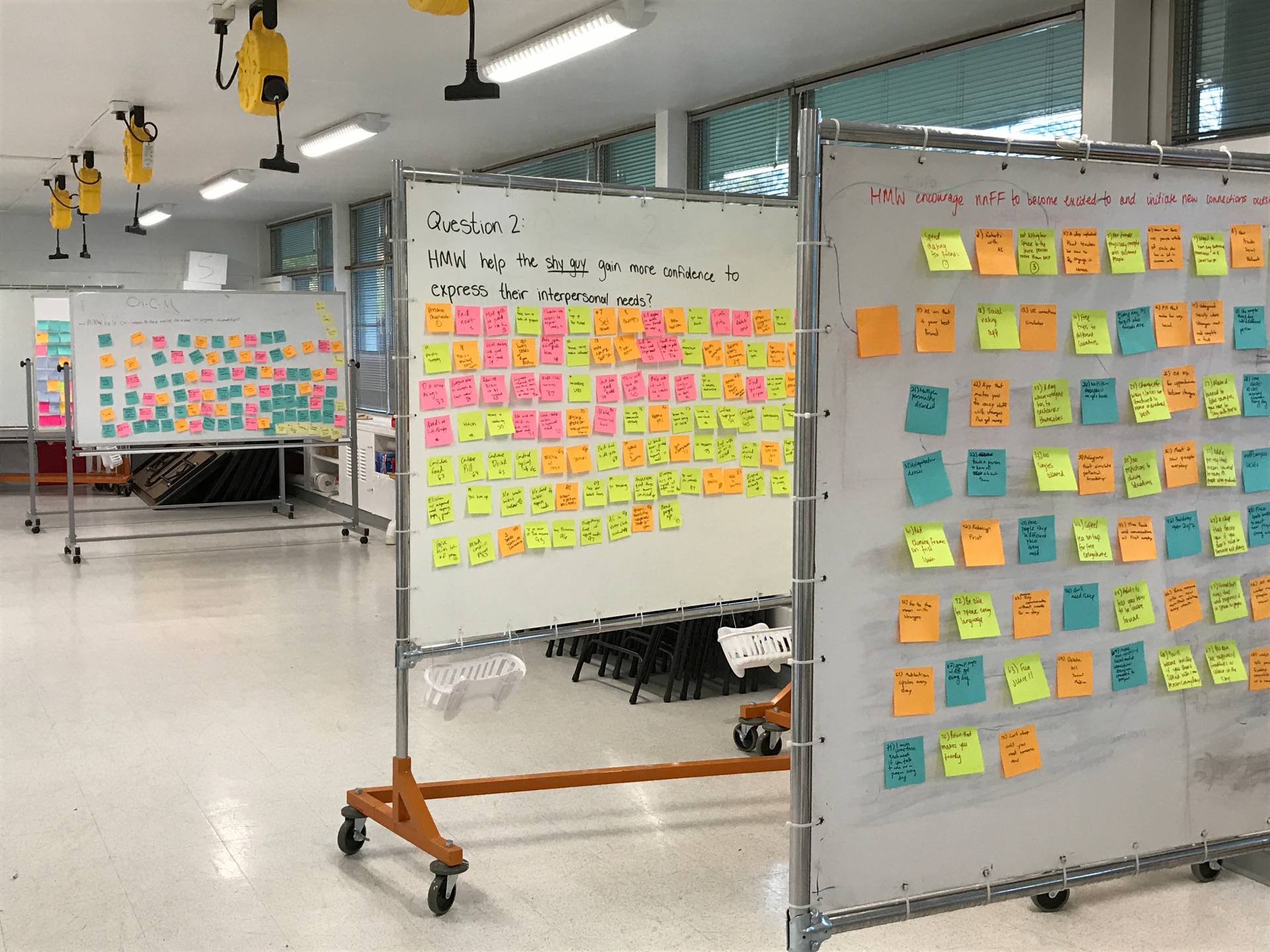 Brainstorming sessions in “Creativity, Innovation and Design” were collaborative exercises that filled up multiple whiteboards.

The University also recognized that students themselves might be the most valuable resource for generating pragmatic solutions, said Calhoun. Students have helped to develop wellbeing training sessions that are designed to help recognize symptoms in peers. They have suggested that University ID cards be affixed with a sticker that includes the contact number for CPS and other campus services, an idea Princeton is considering.

As part of the community-wide effort, the University recently conducted a graduate student survey that included a section on wellbeing. The University is analyzing the data, in collaboration with members of the Graduate Student Government (GSG), and plans to report its findings to the community later this year.

“They were really powerful,” said Abigail Novick, a GSG rep from the Department of Psychology. “I heard a lot of students saying things like, ‘This feels like a quote from me.’ One of the hardest parts about mental illness is you feel so isolated. When you see that everyone else is going through that too, it turns something that’s very isolating into something that can bring people together.”

“Creativity, Innovation and Design” students spent the fall semester fine-tuning their solutions to on-campus alienation. At the final class of the year, they pitched their ideas to public health and University Health Services officials, who served as a “Shark Tank” reality-show-style panel that has the authority to implement aspects of the best proposals. One team of students suggested Café One, a new campus space that would feature smaller tables, creating a “collective solitude” atmosphere that might attract introverts who’d otherwise be intimidated by crowded booths and group tables. Another team suggested an app that would match students from the same academic class and who might be free for lunch, arranging for them to meet and chat about their studies or to make more meaningful connections.

“In this class, we are not asking the students to remove the problem from campus, because that’s impossible to do in one semester,” Pontis said. “But they are finding creative ways to contribute to a long-term solution.”

Princeton students support each other through peer nightline